There are two main different histological types of esophageal cancer, adenocarcinoma and squamous cell carcinoma. Most clinical studies did not differentiate between these two types, but increasing evidence supports differences between esophageal adenocarcinoma and esophageal squamous cell carcinoma (ESCC) with respect to epidemiology, pathogenesis, tumor biology, and prognosis [1]. The most recent 2010 tumor, node, metastasis (TNM) staging system provides different stage groupings for ESCCs and adenocarcinomas of the esophagus in acknowledgement of these differences [2].

Neoadjuvant chemoradiotherapy followed by surgery is superior, especially for thoracic esophageal adenocarcinoma, and the CROSS Trial demonstrated that histological type was not a prognostic factor for overall survival. Patients with ESCC benefited from neoadjuvant chemoradiotherapy the same as patients with adenocarcinoma [1]. However, the optimal treatment for locally advanced ESCC remains controversial in the real world, and clinical treatment includes surgery with or without preoperative treatment or a non-surgical approach using definitive chemoradiotherapy [5-10]. More ESCC patients had upper thoracic esophageal lesions and higher failures in cervical areas and the upper mediastinum after treatment. The cervical and superclavicular lymph nodes are difficult to remove using surgery, and the risk of anastomosis leak may be increased if this area was involved in the preoperative irradiation field.

Few published data have compared all the above-mentioned treatments for thoracic ESCC patients to address this question. Therefore, this study used the matched-pair approach as a less biased comparison of patients with similar clinical stages and other baseline characteristics to assist physicians in determining treatment options for localized advanced thoracic ESCC patients.

The study scanned 642 consecutive patients who were diagnosed with locally advanced ESCC from previous studies [11,21,22,23] between January 1, 2002, and June 30, 2012, at the Sun Yat-sen University Cancer Center. A regional multidisciplinary team (MDT) fully discussed patient treatment options. Each patient underwent a physical examination, laboratory tests and electrocardiograms.,A medical history was acquired including concomitant medications, Eastern Cooperative Oncology Group (ECOG) performance status, and smoking/alcohol abusing history. Patient data included chest and upper abdomen computed tomography (CT) or positron emission tomography (PET) scans, endoscopic ultrasound (EUS) of the esophagus with biopsy, and bone scans. Tumor stage was classified using the TNM staging system proposed by the American Joint Committee on Cancer (6th edition). Patients satisfied the following inclusion criteria: 1) pathologically confirmed thoracic ESCC; 2) without previous cancer treatments; and 3) ECOG performance status ≤2. Patients were excluded if their tumors were too stenotic to be examined by EUS or could not be processed on EUS examination for any other reasons. Patients with severe comorbid conditions and other active malignancies were excluded from the analysis. This study was a retrospective analysis of a prospectively assembled ESCC database. The Institutional Review Board of Sun Yat-Sen University Cancer Center approved the database and study design. Informed consent from all patients was obtained before treatment.

All patients were treated using the en bloc technique [6]. Briefly, the surgery consisted of an initial right-sided posterolateral thoracotomy for esophagectomy, midline laparotomy for gastric tube mobilization, and a left-side cervical incision for anastomosis. A retrosternal or posterior mediastinal route was used for alimentary tract reconstruction. LNs were resected and labeled by their specific location according to the guideline proposed by the Japanese Society for Esophageal Diseases. Our hospital routinely performed two-field lymphadenectomy for patients with unfound cervical metastasis, including right/left laryngeal recurrent nerve, paraesophageal, subcarinal, superior phrenic, lower posterior mediastinal and abdominal lymph nodes.

Means and standard deviations, frequencies and percentage were calculated to describe the data. A logistic regression model was used to generate propensity scores, including all potential confounding variables. Patient demographics were compared between three treatment groups by χ2 or Mann-Whitney U test. The potential confounding variables were considered by the MDT and included age, ECOG performance status, EUS-defined clinical staging and CT-defined clinical staging. The Kaplan-Meier method was used to produce survival curves, and 3-year OS and DFS were determined. DFS and OS were compared using a two-sided log-rank test. IBM SPSS Statistics ver. 22 for Windows (IBM Corporation, Armonk, NY, USA) was used to perform all statistical analyses, and differences were considered significant for p<0.05.

A total of 274 of the 642 consecutive patients with locally advanced ESCC were eligible for inclusion. Based on the above-mentioned matching procedure and considering five matching criteria, 156 patients were excluded because of unavailable EUS examinations (Fig. 1). Table 1 shows the details of the 274 patients with respect to treatment modalities and matched tumor characteristics. Patient sex, age, clinical T stage, clinical N stage and clinical stage (AJCC 6th edition) were well matched (p>0.5). More than 75% of patients in all three groups were diagnosed with stage III disease according to EUS and CT scans. There were 43/67 (67.2%) patients with upper thoracic esophageal cancer in the CCRT group, and the NCT followed by surgery and surgery alone groups included more patients with primary tumors located at the middle and lower esophagus (Table 1). 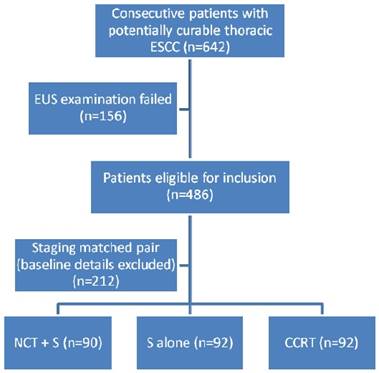 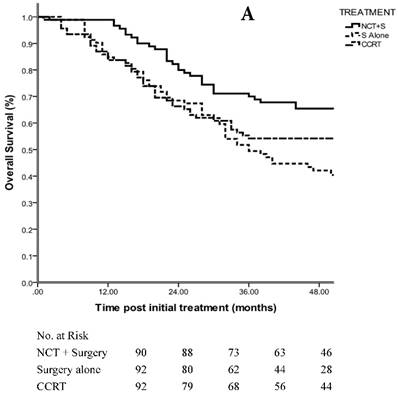 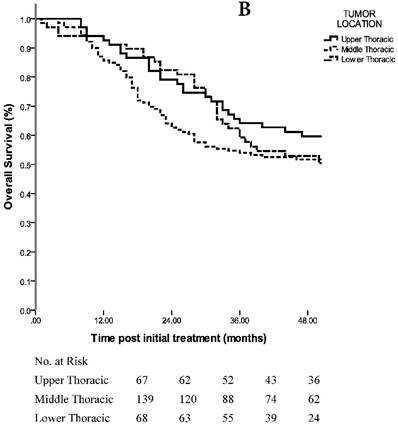 A total of 132 patients died during the observation period of the current study. The cause of death was disease progression in 124/132 (93.9%) patients. Table 2 presents the failure patterns of all 274 patients who received the three different treatments. Local failure remained the main cause of death. However, NCT followed by surgery significantly decreased the incidence of loco-regional recurrence in thoracic ESCC (p=0.026). The staging matched-pair method revealed that the incidence of distant metastases and multiple failures were comparable in all three groups.

Treatments and patterns of failure of potentially curable ESCC (n=274)

NCT followed by surgery, surgery and definitive CCRT are the main radical treatment options for localized thoracic ESCC nowadays [7]. Several randomized clinical trials directly compared the outcomes of esophageal cancer patients receiving esophagectomy alone with patients receiving NCT followed by surgery [1,14,15]. The results of the CROSS trial, including treatment efficacies and failure patterns, were published recently [1,16]. There was a significant estimated 5-year OS benefit of 13% in favor of the NCT + surgery group after a minimum follow-up of 24 months. There were only 46/366 (12.6%) ESCC patients involved in this study, but the data analysis suggested that the benefit of NCT on survival was consistent across different histological subgroups [1]. However, there is no large-scale randomized trial that compared the treatment efficacies of NCT followed by surgery, surgery and definitive CCRT. One randomized clinical trial in the UK tried to compare NCT and surgery with definitive CCRT in localized ESCC, and the results demonstrated that this analysis was not feasible because of the low number of incident-eligible patients [17]. The results in the current study suggested that potentially curable ESCC patients who received NCT followed by surgery achieved a superior 3-year OS compared with those receiving surgery alone (estimated OS of 68.7 months in the NCT + surgery group, 52.7 months in the surgery group, p=0.000 using the log-rank test), which is consistent with the previous published data from the CROSS trial. However, only a marginally significant p-value (p=0.082 using the log-rank test) was observed compared with the CCRT group (estimated OS of 68.7 months vs. 59.8 months). The staging matched pair analysis demonstrated comparable the 3-year OS rates between the surgery alone group and the CCRT group.

Karran et al. [18] reported a study of 727 esophageal cancer patients and used regression adjustment to create a cohort of 521 patients who were available for comparison (277 patients in the surgery group and 244 patients in the CCRT group). The median survival, and 2- and 5-year survival rates after surgery were 27 months, 53.8% and 31.0%, respectively, compared with 28 months, 54.2% and 31.9% after CCRT (p=0.918). The Bedenne et al.'s study [19] recruited ESCC patients who received NCT, and patients who responded to NCT were randomized to undergo surgery or CCRT. The long-term treatment outcomes seemed comparable, but the study is limited because of the inclusion of only patients who responded to NCT. There was a lack of high-quality results comparing these three treatment options for locally advanced ESCC, but the current study demonstrated that NCT + surgery decreased the local recurrence of ESCC patients. The local recurrence rate in the NCT + surgery group was 18.9%, and it was 34.8% in the surgery alone group and 32.6% in the CCRT group (p=0.026). The benefit of local control using NCT + surgery might contribute to the better treatment outcome of ESCC patients compared with the other two groups.

The AJCC 7th edition staging system of esophageal cancer identifies clinical stage as the most important issue in making treatment decisions. There were few data on the impact of tumor location of thoracic ESCC of treatment outcomes, which may because most of the data came from surgical treatment. Previous studies suggested that upper thoracic ESCC patients had poorer long-term survival than middle thoracic and lower thoracic patients because of higher local recurrences. Our study demonstrated that upper thoracic ESCC patients in the NCT + surgery group and surgery alone group exhibited higher local recurrences at the cervical area, anastomosis and upper mediastinal area than patients who received definitive CCRT. A meta-analysis also demonstrated that the commonly metastatic areas of thoracic esophageal cancer were different according to the location of esophageal primary tumors. The metastatic rates of cervical, upper-mediastinal and mid-mediastinal nodes were 30.7%, 42.0% and 12.9%, respectively for upper thoracic esophageal cancer. The rates of cervical, upper-mediastinal, mid-mediastinal and abdominal nodes in middle thoracic esophageal cancer were 16.8%, 21.1%, 28.1% and 21.4%, respectively. The rates of cervical, upper-mediastinal, middle and lower mediastinal and abdominal nodes in lower thoracic esophageal cancer were 11.0%, 10.5%, 19.6%, 23.0% and 39.9%, respectively [20]. These findings suggest that cervical and upper-mediastinal nodes had higher risks to develop local recurrences in upper thoracic ESCC patients, and these areas should be covered by local therapy to prevent failures after radical treatment. Subclinical diseases in these areas are not easily treated using surgical methods, but these areas can be covered by radiotherapy without obvious side effects. Therefore, definitive CCRT could achieve promising long-term outcomes compared to surgical options. Subgroup analysis failed to demonstrate that tumor location was a significant risk factor for long-term treatment outcome in this entire cohort. The estimated OS rates in ESCC patients with upper thoracic, middle thoracic and lower thoracic disease were 65.8 months, 63.2 months and 57.7 months, respectively (p=0.446 using log rank test). This result suggests that full discussions with MDT physicians before treatment may be useful for treatment decision-making and provide individualized treatment options for thoracic ESCC patients.

This retrospective study has some limitations, such as selection bias, small sample and short follow-up time. It was a nonrandomized, observational comparison of three treatment options and confounded by case mix. The use of staging matched-pairs in the analyses of overall and disease-free survival reduces some of these biases. However, randomized trials are warranted to validate our results.

The authors have no conflicts of interest to declare.

This research was supported by 1. funds from the University Cancer Foundation via the Sister Institution Network Fund at the University of Texas MD Anderson Cancer Center and supported in part by the National Institutes of Health through M. D. Anderson's Cancer Center Support Grant CA016672 as a portion of these studies were performed in the North Campus Flow Cytometry and Cellular Imaging Core (PI: Ronald A DePinho). 2. funds from the Scientific Research Foundation for the Returned Overseas Chinese Scholars, State Education Ministry. 3. National Nature Science Fund, Support Grant 81301932.