Conclusion: To our knowledge, cell line and patient cohorts are the largest and characterized cohorts examined for CEA so far. Hereby, CEA expression in ampullary cancer cells permits an estimation of outcome and suggests an opportunity for individualized CEA-directed therapy. Further trials with larger cohorts are needed to verify our results and to integrate CEA immunohistochemistry into clinical routine.

The Ampulla of Vater is a complex anatomic structure formed by the confluence of the pancreatic duct, the common bile duct and duodenal mucosa [1, 2]. Tumors arising in this region show a mixture of histophathological patterns including intestinal, pancreaticobiliary or mixed differentiation [3-5]. Among all gastrointestinal neoplasms, carcinomas of the Ampulla of Vater (AMPAC) are diagnosed in about 0.5 % of cases [6]. Prognostic factors for overall survival include nodal status [7], resection margin status (R), pancreatic head infiltration [8] and tumor size [9]. The family of the CEAs was discovered in 1965 by Gold et al. [10]. Physiologically they are expressed in fetal gut, liver, and pancreas between the second and sixth months of gestation, with intriguing re-appearance in cell dedifferentiation [11]. In the process of cell differentiation, members of the CEAs are down-regulated and their physiological expression is confined to the apical region of epithelial cells in most parts of the gastrointestinal tract [12]. Many human tumor tissues display overexpression of CEA (e.g., stomach, colon, rectum, pancreas, lung and cervix) [13] and some tumors show elevated CEA serum levels. For example in pancreatic cancer, a combination of serum levels of CEA and CA19-9 allows specific diagnosis [14]. In gastric cancer, high CEA serum levels are associated with poor prognosis [15]. Furthermore in non-small cell lung cancer (NSCLC) elevated CEA levels are associated with circulating tumor cells [16].

Cell-surface localization of CEA is mediated by a carboxy-terminal glycosylphosphatidylinositol (GPI) anchor [17]. At present the expression of CEA is frequently used for the immunohistochemical evaluation of normal and malignant tumorous tissue. However, increasing evidence supports that CEA is also functionally involved in tumor biology. In general, CEA is postulated to play an important regulatory role in apoptosis [18]. It plays an important role in mediating cell-cell/extracellular matrix contacts and thus inhibits anoikis, which is an apoptosis subtype that is triggered by perturbed cell-matrix interactions [19].

Based on the continuing interest in CEA, we have investigated CEA expression in an AMPAC patient cohort with detailed clinico-pathological annotation.

The analyses were performed according to the guidelines of the Declaration of Helsinki. The study was approved by the Ethics Committee of the Medical University Freiburg, (ref 13/11). Before study inclusion, patient data were anonymized.

For all AMPAC specimens included into this study, a standardized workup for gross examination was performed as described previously [20]. Briefly, all specimens were transferred for frozen section to the Institute of Surgical Pathology, Medical Center- University of Freiburg, Germany; and prior the examination by experienced pathologists tumor masses were measured; staging specific parameters (e.g. tumorsize, histological WHO type, tumor grade, UICC classification (pTNM)), status of the resection margins, presence or absence of lymphangiosis or hemangiosis carcinomatosa and perineural invasion were documented.

According to Albores-Saavedra et al. [23] the tumors were classified into adenocarcinoma with intestinal-type, mixed-type, pancreaticobiliary-type and undifferentiated growth pattern.

We have recently investigated the proteome composition of five different AMPAC cell lines, namely AMP7, AVC1, RCB1280, SNU869 and SNU478 to better understand their suitability as in vitro model systems for the investigation of AMPAC [21]. For the present work, we employed the iBAQ method [22] for all five aforementioned cell lines to determine relative protein abundances. As highlighted in Fig. 1, CEA was only identified in SNU478 cell and is among the top 50 % of all identified proteins ranked according to their abundance. This finding further substantiates AMPAC-associated expression of CEAs and characterizes SNU478 cells as a potential in vitro model system for putative investigations on functional roles of CEAs. The elevated expression levels of CEAs in SNU478 correspond to its partially dedifferentiated status.

CEA expression level in the SNU478 AMPAC cell line across all identified proteins. Using the MaxQuant implemented iBAQ score, the average abundance (log2 transformed) of all proteins was plotted from the least to the most abundant protein. 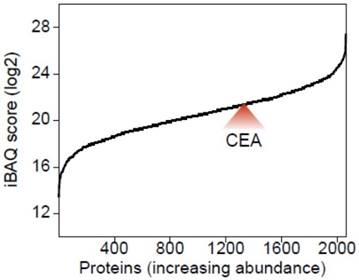 The mean of the CEA expression intensity and CEA expression product (percentage multiplied with intensity thereof the mean) were significant predictors of survival (p= < 0.001 and p= 0.009).

To analyze the CEA expression pattern in the different histologic subtypes of AMPAC, two-sided Chi squared and Kruskal-Wallis tests were performed (Table 2). Hereby only statistical trends were identified for CEA expression in the pancreatobiliary type (83% moderate to high staining intensity) compared to intestinal type AMPAC (89% weak to moderate staining intensity). 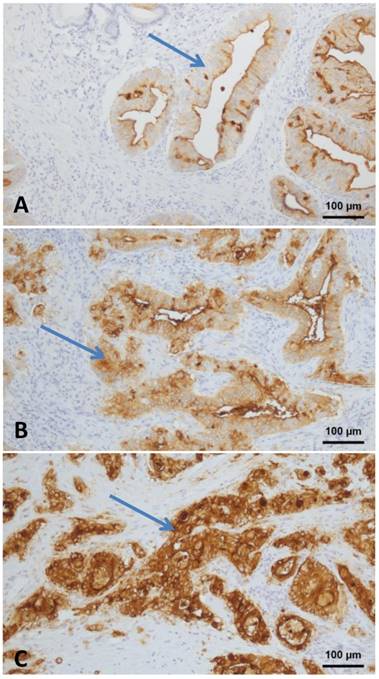 For multivariate survival analysis, all variables displaying significant correlations and trends (p < 0.15) were included in a Cox proportional hazards model with forward selection and backward elimination. Only CEA expression product (p=0.018) and LNR (p=0.004) were independent predictors of survival after resection. In backward elimination only CEA expression intensity persisted. More details are presented in Table 1.

Numerous studies concentrate on parameters influencing the outcome of AMPAC. We identified expression level of CEA and LNR as independent prognostic factors for overall survival in patients with AMPAC.

In a study with 23 carcinomas (15 duodenal adenocarcinomas and eight AMPAC), Zhu et al. had previously analyzed the impact of CEA, EMA, p53 and TGF-alpha expression regarding patient survival time, tumor stage or histological grade without statistically significant correlation [35]. They have analyzed a number of eight AMPAC regarding immunohistochemical CEA expression, so we speculate that their number of sample was too small to reach statistical significance. In a larger cohort comprising 24 patients, Kamisawa et al. were able to prove the impact of CEA on survival in univariate but not in multivariate analyses [36]. Nevertheless, the findings of Kamisawa et al. further support our results. At this point it should be highlighted, that our cohort comprises 36 ampullary cancers, which is to our knowledge the largest ampullary carcinoma cohort analysed regarding CEA expression in literature thus far. There are many studies regarding CEA serum levels in patients as a tumor marker in different solid cancers [37, 38]. In this context Kim et al. found in their analyses of 104 ampullary cancers a multivariate significant influence of a CEA serum level > 5 ng/ml and disease recurrence. In univariate analyses especially the CEA serum level of > 5 ng/ml of the intestinal subtype was adversely correlated with disease free survival. [39]. But immunhistochemical analyses and correlation with clinico-pathological data are rare. Batge et al. postulate in 1986 that pancreatic “duct type” carcinomas, in contrast to “non duct type” tumors and “normal ducts”, are distinguished by the presence of a CEA related epitope [40]. In 1991 Yamaguchi et al analysed CEA expression in pancreatoduodenal carcinomas but were not able to demonstrate a prognostic relevance [41]. Recently published data for pancreatic cancer demonstrated a positive correlation between CEA overexpression and lymph node status as well as distant metastases and showed a decreased overall survival in univariate analysis. Nevertheless, in multivariate analyses, CEA also failed to reach statistical significance [42]. Obviously our immunohistological study had to deal with the difficulty of tumor heterogeneity and sampling error like other studies. Because of our standardized gross examination and the product of the percentage of positive tumor cells and the staining intensity used for our analyses, a possible bias was minimized.

Biologically, a possible explanation for the positive correlation between CEA expression and tumor aggressiveness was postulated by Ilantzis et al. Their results support the model of a direct influence of CEA onto colon carcinogenesis by inhibiting colonocyte differentiation [43]. Ordoñez et al. showed a prolonged survival of colonocytes without cell-basement membrane adhesion in case of CEA overexpression, compared to mature colonocytes [44]. Furthermore Ilantzis et al. showed that deregulated overexpression of CEA blocks cellular polarization, disrupts tissue architecture and blocks differentiation in cell lines and in vivo [45]. Under physiological circumstances, detached cells undergo anoikis, which can be prohibited by CEA overexpression [19].

Furthermore, our results have the capability gaining therapeutically relevant importance because of the bispecific T-cell engager MEDI-565 (MT111). The CEA/CD3-Bispecific Antibody MEDI-565 (MT111) binds CEA positive tumor cells and develops cytotoxicity against these tumor cells in vitro. In vivo, MT111 inhibits growing of colon carcinoma, which was recently supported by a clinical phase I study [46]. Thereby, CEA could be a potential target for MT111 and lengthen patient survival time of patients suffering from ampullary carcinoma with CEA overexpression. Unfortunately CEA serum levels of the patients from the cohort were not available in this study. Hence, comparing CEA serum levels to the immunohistochemically detected CEA expression in the tumor tissue was not possible.

Our findings highlight CEA as a multivariate significant prognosticator in a group of ampullary carcinomas. Although AMPAC typically feature a favorable prognosis because of their early clinical symptoms compared to other pancreatic tumors, the CEA expression may be of value for the detection of cases with a relatively poor prognosis and a specific individual therapeutic need and option. The low incidence of ampullary cancer and the consecutive small patient cohort, even in a high-throughput medical center, is a legitimate limitation. Multicentric prospective clinical trials comprising larger cohorts are the logical consequence for verifying our results and to integrate CEA into clinical routine diagnostics.

The article processing charge was funded by the German Research Foundation (DFG) and the Albert Ludwigs University Freiburg in the funding programme Open Access Publishing.

32. Cunningham L, Stocking B, Halter SA, Kalemeris G. Immunoperoxidase staining of carcinoembryonic antigen as a prognostic indicator in colorectal carcinoma. Diseases of the colon and rectum. 1986;29(2):111-116