Purpose: Several new treatment options for patients with metastatic castration resistant prostate cancer (mCRPC) have been approved within the last years - among them cabazitaxel (CAB), abiraterone acetate, enzalutamide, and radium-223. The aim of this study was to assess factors predictive for efficacy of CAB.

Methods: We analyzed all patients with mCRPC treated with CAB at our institutions between 2011 and 2016. Data were retrieved retrospectively from the electronical patient chart.

Patients that suffer from metastatic castration resistant prostate cancer (mCRPC) had few treatment options for a long time [1]. During the last decade major progress has been made extending the treatment options considerably. New generation anti-hormonal agents (NAA; abiraterone (ABI), enzalutamide (ENZA)) new radiotherapeutics (alpharadin; radium-223) and a new taxan chemotherapy (cabazitaxel (CAB)) have all been approved and shown to be active after failure of docetaxel (DOC) as a 2nd line therapy [2,3,4,5,6]. However, limited data are available to differentiate patients that may benefit rather from chemotherapy with CAB than from a NAA post DOC. Moreover, none of these substances have been investigated in 3rd or 4th line within a prospective randomized clinical trial, and there is concern regarding acquired cross resistances among them. Nevertheless, in real-world oncology many patients receive more than two treatment lines aiming at a cumulative survival benefit that has yet to be confirmed. Prospective trials with approved substances are rarely ever conducted. Hence, retrospective analyses might help to improve decision making and treatment processes for this relevant patient group.

The objective of this study was to analyze all patients from our comprehensive cancer center and private practice who received CAB either in 2nd line or in later lines for clinical parameters associated with a response to CAB.

In this retrospective observational study all 69 patients with mCRPC treated with CAB at the National Center of Tumor Diseases (NCT) and a private practice were identified and their records accessed through the electronic patients charts [7]. The project was approved by the local ethics committee.

Progression free survival (PFS) was evaluated using the Prostate Cancer Working Group 2 (PCWG2) criteria [8]. Side effects were classified according to CTCAE dictionary version 4.0. Overall survival (OS) was calculated from the date of start of systemic anti-hormonal treatment and the start of CAB treatment to the date of death or date of last follow-up (last assessed on March 2016). Survival and progression were calculated using Kaplan-Meier estimates and compared using log-rank tests. Associations between factors were evaluated using non-parametric Kendall-tau or Pearson correlation. Primary outcomes were the OS as well as the PFS since initiation of CAB. Secondary outcomes were PFS on 1st line treatment as well as correlation analyses between treatment factors. Statistical analyses were conducted using the SPSS v21 software.

CAB was administered according to the protocol that was established by the Phase-III TROPIC trial in the majority of patients [1]. However, 17.3 % of patients received an upfront dose-reduction (i.e. 20% = 20 mg/m² qd22, n=9; ~30% = 17.5-18 mg/m² qd22, n=3) due to reduced general condition (ECOG 2 or ECOG 1 plus bone marrow dysfunction). Three patients were treated biweekly analogue the Prosty II trial protocol [9]. Six patients received CAB on a weekly scheme. In four cases dose reductions were necessary after cycles 1 (n=2), 2 (n=1) and 6 (n=1) due to bicytopenia, respectively. All patients received CAB in 4th line. In 3 patients, CAB regime was changed from three-weekly to weekly after cycle 1 due to bicytopenia. Those patients had received CAB in 3rd, 4th and 6th treatment line. Treatment was generally well tolerated with an average of 5 cycles (range 1-11) and a treatment duration of 3.6 months (range 0.4-17.0). Treatment was discontinued in most cases either due to progressive disease or when anticipated cycles of CAB had been applied. In one case CAB treatment was terminated due to patient preference. In four patients treatment was discontinued due to toxicity (neutropenic fever CTC 4° (n=2); acute renal insufficiency CTC 4° (n=1); peripheral sensory and motor neuropathy CTC 3° in an 88-years old individual (n=1)). Three CTC 5° side effects were noted: Two patients died in neutropenic sepsis (84-years old patient on cycle 1 day 11; 75-years old patient on cycle 2 day 11). A 71-years old patient died due to spontaneous subdural hematoma as a result of CAB-induced thrombocytopenia. Three patients are still on treatment. Patient characteristics are summarized in Table 1.

Therapeutic options for mCRPC patients have been greatly expanded within the last couple of years. Beside NAAs, with CAB a novel taxane has also entered clinical practice [10,11]. CAB has been approved for the treatment of mCRPC in the post-docetaxel setting as a 2nd line treatment and is currently investigated within the FIRSTANA trial as 1st line treatment option at different dose levels. However, in the real world CAB is often also used post ABI or ENZA as a 3rd or 4th line therapy being efficient in those settings [12,13,14,15]. Retrospective single and multicenter experiences as well as meta-analyses have come to contradicting results for the optimal sequence of medication. While some showed no significant differences between the different agents used in 3rd or 4th line [16], others pointed to a survival benefit when applying the sequence DOC-CAB-ABI [14,17,18] or the sequence of CAB-NAA or vice versa compared to NAA-NAA post DOC [19]. However, no prospective randomized clinical trial has investigated treatment outcomes beyond 2nd line and for different sequences. In addition, in the aftermath of the CHAARTED and STAMPEDE trials more and more patients will have received DOC in the hormone-sensitive setting raising new questions of optimal therapeutic approaches upon the development of castration resistant disease. In our retrospective cohort patients with a PFS longer than 6 months on 1st line therapy had a significantly longer PFS on CAB irrespective of the line of treatment. Interestingly, it has been shown before, that cross resistance may exist between new anti-androgens and taxanes which is in accordance with our data [20,21].

a) Time between initiation of systemic LHRH treatment and the development of castration resistant disease was 35.0 months. b) PFS on 1st line treatment independent of treatment type was 7.0 months. 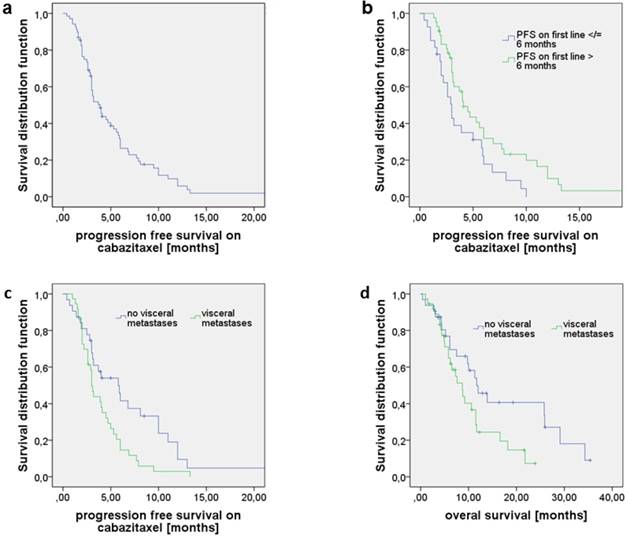 A high GS (as defined as 8-10) was not predictive for response to CAB as previously reported [22]. While previously published studies showed a correlation between longer duration of remission on first line DOC for higher GS [21,23] we could not detect any such correlation for CAB in our cohort. We further found no correlation between the absolute level of PSA pre-CAB. While PSA increases during treatment for CRPC may be flare up phenomena and are not generally associated with radiographic progression [4], a PSA decline is in most studies associated with a better survival. We could also demonstrate that statistical significance for OS benefit was already reached with a PSA decline of at least 30%.

We reported three grade 5 toxicities and several treatment discontinuations and dose modifications showing that CAB has substantial toxicity in this elderly and frail population. It should be noted that lower doses are equally effective with lower toxicity [28, 29] and should be considered as initial dose level.

Limitations to our study are its retrospective character, dual center data and small sample size that may have introduced a bias. These factors might explain the inability to detect survival differences due to to inadequate power in some analyses.

The optimal treatment sequence for agents in mCRPC is still unknown. Prospective clinical trials are needed.

Sequencing of new substances for mCRPC remains a subject of debate. CAB is approved for second line therapy following DOC. However, it is also used following new anti-hormonal treatments or in later lines. In our analysis CAB seems to be active in all these indications, especially if the tumor was sensitive to any 1st line treatment, irrespective of the line of treatment when CAB was being deployed. However, patients with visceral metastases had a significantly shorter OS and PFS on CAB. Prospective studies are needed to identify the optimal treatment sequence for patients with mCRPC.

All procedures performed in studies involving human participants were in accordance with the ethical standards of the institutional and/or national research committee and with the 1964 Helsinki declaration and its later amendments or comparable ethical standards. All patients provided written informed consent. Any information connected with the identity of individual subjects was excluded from this study.

Consent for publication was approved by the local ethics committee. All authors have read and agreed on the current version of the manuscript.

Original data and material are completely available upon requested from the corresponding author.