Leukemia is a leading cause of cancer deaths in the developed countries. Great efforts have been undertaken in search of diagnostic biomarkers of leukemia. However, leukemia is highly complex and heterogeneous, involving interaction among multiple molecular components. Individual molecules are not necessarily sensitive diagnostic indicators. Network biomarkers are considered to outperform individual molecules in disease characterization. We applied an integrative approach that identifies active network modules as putative biomarkers for leukemia diagnosis. We first reconstructed the leukemia-specific PPI network using protein-protein interactions from the Protein Interaction Network Analysis (PINA) and protein annotations from GeneGo. The network was further integrated with gene expression profiles to identify active modules with leukemia relevance. Finally, the candidate network-based biomarker was evaluated for the diagnosing performance. A network of 97 genes and 400 interactions was identified for accurate diagnosis of leukemia. Functional enrichment analysis revealed that the network biomarkers were enriched in pathways in cancer. The network biomarkers could discriminate leukemia samples from the normal controls more effectively than the known biomarkers. The network biomarkers provide a useful tool to diagnose leukemia and also aids in further understanding the molecular basis of leukemia.

Leukemia is a prevalent hematologic malignancy and one of the most common causes of cancer deaths in the developed countries[1, 2]. The overall incidence of leukemia is 14 per 100000 people in the United States in 2015 and is projected to continue rising. Based on the origin, leukemia can be classified into myeloid leukemia or lymphoid leukemia, which can be subdivided into acute or chronic according to the degree of cellular differentiation[3, 4].

Many of the symptoms of leukemia are non-specific and vague, which could not be diagnosed by conventional blood tests and bone marrow examination[5, 6]. Plenty of efforts have been devoted to investigate the molecular alterations in leukemogenesis. Next generation sequencing of human genomes and exomes has revealed somatic mutations, aberrantly expressed genes, microRNAs and DNA methylations with putative roles in leukemia[7-9]. However, most of the individual molecules suffer from low reproducibility and high false-positive rates. Few of them have been translated to the clinic for diagnostic application.

It is well recognized that cancer is a complex disease caused not by the malfunction of single molecules but their collective behavior in the network [10-15]. Therefore, network biomarkers are considered to better characterize leukemia than individual molecules and have recently attracted much attention. A number of protein interaction sub-networks have been proposed for early diagnosis, prognosis and efficacy prediction of cancers[16-19].

In this study, we proposed a framework (Figure 1) that integrates protein-protein interaction (PPI) data and microarray-based gene expression profiles to construct network biomarkers for accurate prediction of leukemia. The network biomarkers prove to be effective in distinguishing leukemia from normal samples.

that collects 14454 genes and 108470 interactions from six manually curated public databases (listed in Table 1). The leukemia-associated genes were extracted from the commercial knowledge database MetacoreTM, which is developed by GeneGo.

The statistical analysis was invoked through the limma (Linear Models for Microarray Data) R package [36] and the affy(Methods for Affymetrix Oligonucleotide Arrays) R package in R software platform [37]. Student t-test was used to identify the significant difference level (P-value) of each considerable gene in each dataset. To enhance the accuracy, we applied the empirical Bayesian statistical method to moderate the standard errors and then utilized the method proposed by Benjamini et al. to adjust the multi-testing [38], and got the adjusted P-values simultaneously.

In general, the network integration analysis was performed in 3 steps. At the first step, we converted the adjusted P-values to Z score through using the inverse normal cumulative distribution. Higher Z score indicates more important role in leukemogenesis. Given the Z score, we performed a greedy search to identify the modules with a locally maximal Z score. The candidate modules were seeded with a single gene and then a neighbor within a distanced=3 from the seed were iteratively added. If the neighbor added to the Z score, it was incorporated into the module. The search terminated when no addition increased the Z score over the improvement rate r. The parameter r was set as 0.05 to avoid over fitting. At last the top 10 modules with the highest Z-score identified from each run were merged and iteratively searched for 3-5 times, until the module reached the optimal size of 70-80 nodes. We used jActiveModules [39] to select active modules from the weighted PPI network since it is a fashionable method for this kind of investigation. jAM is a plug-in of Cytoscape which evaluated module activity with Z score.

At last, as 6 optimized modules include 290 genes in total, which are too large and loosely interconnected for further analysis, we carried out the overlapping analysis to find out the number of enriched genes shared by each optimized modules. We overlapped the six modules and selected the genes shared by at least two networks to construct the final network-based biomarker.

We performed pathway enrichment analysis in Ingenuity Pathway Analysis (IPA) and Kyoto Encyclopedia of Genes and Genomes (KEGG) [40]to provide functional insight into the identified network marker. The statistical significance of the enrichment was calculated using hypergeometric test and adjusted by FDR method (P-value < 0.05).

Hypergeometric test was used to test whether the network biomarkers are significantly enriched with leukemia-related genes. Known mutation genes related to cancers were obtained from the Catalogue of Somatic Mutations in Cancer (COSMIC), which is a cancer gene census [41]. 213 of the COSMIC genes are found in common with the GeneGO database. An empirical P-value was calculated to evaluate the statistical significance. P-value was obtained according to the following equation:

We employed the receiver-operating characteristic (ROC) analysis to evaluate the prediction performance of the network biomarkers in distinguishing leukemia samples from the normal controls. The epicalc R package (http://CRAN.R-project.org/package=epicalc) was used to produce the ROC curves. A 5-fold cross validation was performed on three gene expression dataset listed in Table 3. Normal samples were set as 0 and cancer samples were set as 1. The classification performance was represented as the area under curve (AUC). We also provided sensitivity, specificity and accuracy for the network biomarkers.

After overlap analysis, a total of 97 genes along with their interactions were incorporated into the final network-based biomarkers, as illustrated in Figure 2. Genes with previous evidence in leukemia are marked yellow.

The flowchart of network biomarkers identification for leukemia diagnosis. 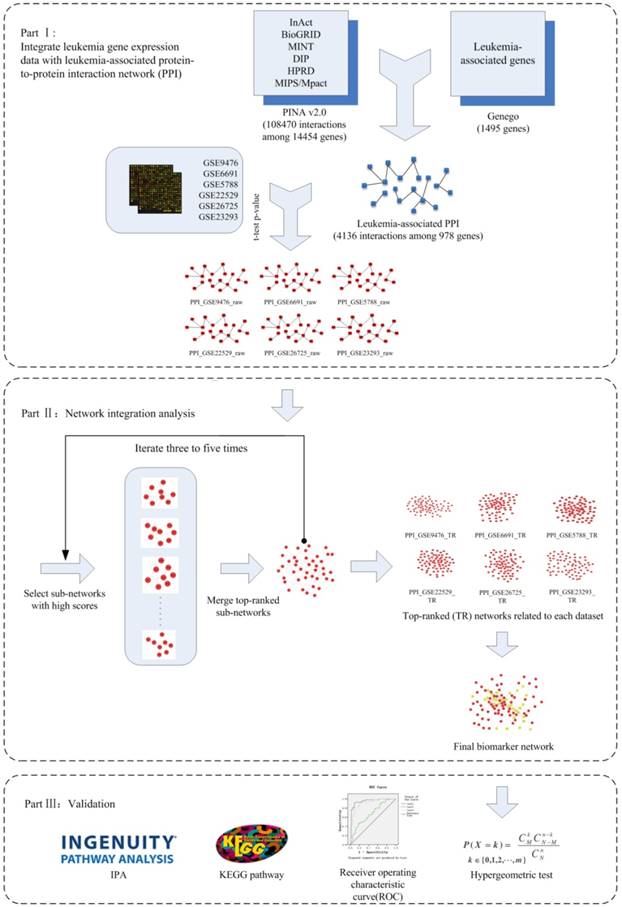 Detailed information of the active modules. 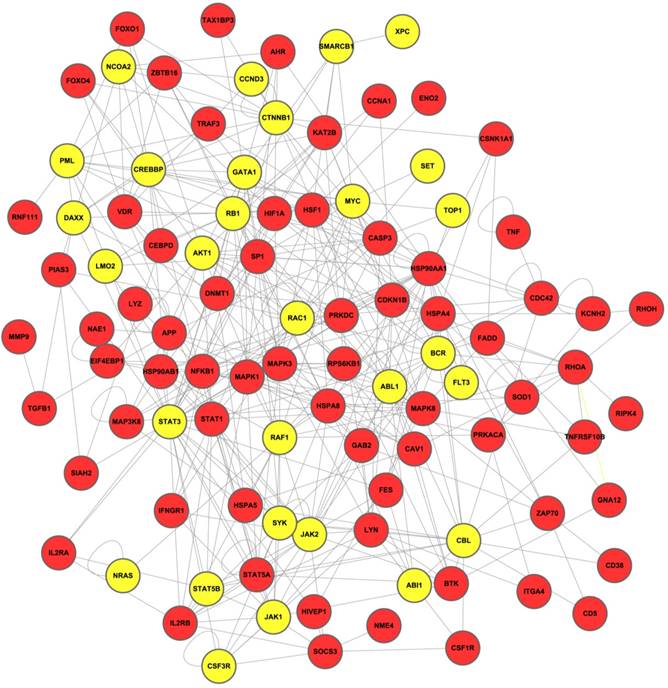 The network biomarkers were most enriched for molecular mechanisms of cancer (IPA) and pathways in cancer (KEGG). Leukemia-specific pathways such as Chronic Myeloid Leukemia (KEGG) and Acute Myeloid Leukemia Signaling (both IPA and KEGG) were also enriched and showed high statistical significance. It indicates that genes in the biomarker network are closely associated with the development of different types of leukemia. Besides, in He's study, P13K/AKT Signaling (IPA) was also proved to be involved in chronic myeloid leukemia[42]. Irwin et al. found that ErbB inhibitors played important roles in Philadelphia chromosome-positive acute lymphoblastic leukemia (Ph(+)ALL) and ErbB signaling (KEGG) was a complementary molecular target in Ph(+)ALL [43]. The top-ranked pathways in both IPA and KEGG displayed apparent correlation between leukemia and the network biomarkers, which implied the potential accuracy of our result. Figure 3 shows the top 10 most significantly enriched IPA and KEGG pathway respectively.

We used the Database for Annotation, Visualization, and Integrated Discovery (DAVID) [44] for the Gene ontology (GO) annotation in three domains: molecular function, biological process, and cellular component. The top 10 most significantly enriched items for each domain are shown in Figure 4. These results indicate that genes in the network are closely associated with the biological processes in the development of different types of leukemia, such as cell death [45] and apoptosis [46]. This indicated the accuracy of the predicted network biomarkers to a certain extent. 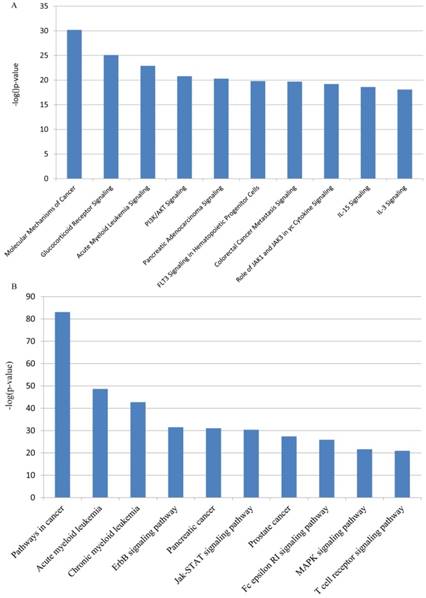 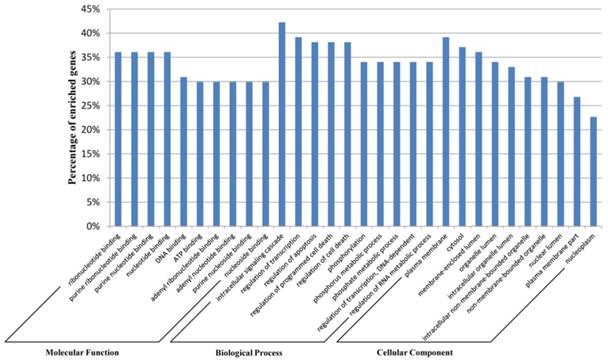 We further investigated whether the genes in the network biomarkers were randomly obtained. The statistical significance was checked using hypergeometric test and a significant p-value of 0.008987933 was obtained. This indicates that the candidate network biomarkers are enriched with known leukemia-related genes and could not be obtained randomly.

To evaluate the performance of network biomarkers in classifying leukemia and normal gene expression profiles, we used three independent gene expression datasets listed in Table 3 as tested datasets to produce the ROC curves. We compared the network biomarker with three reported gene biomarkers: CD38[47], BCL2 [48] and IGFBP7 [49]. The reasons we chose these three markers for comparison are as follows, 1) these biomarkers are all well-studied and all of them have been validated by clinical experiments. 2) The marker CD38 is a member of our network whereas the remaining two are not. We included two others for fair evaluating the performance of our network biomarker. Figure 5 shows the ROC curves for network biomarkers and 3 known biomarkers. Network-based biomarker has higher AUC than any of the single markers which means network-based biomarker could more effectively discriminate the leukemia from the normal controls. The sensitivity, specificity and accuracy of each dataset are given in Table 5. 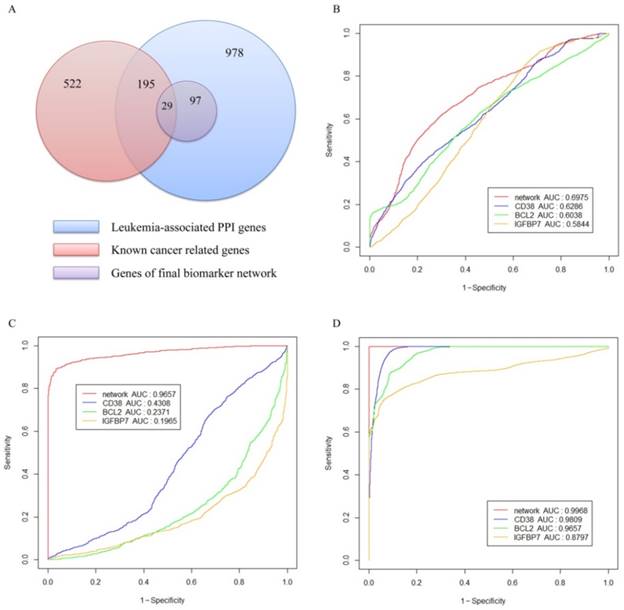 It is worth noting that for network biomarkers from GSE8835 has a relatively lower AUC than the other two datasets. This may be caused by the difference of platform and method between GSE8835 and the training datasets. Anyhow, the accuracy of the network biomarkers is still higher than other three single biomarkers.

The result indicates that the putative network biomarkers could diagnose leukemia samples more accurately and could be used as putative biomarker to aid in early diagnosis of leukemia.

In conclusion, we developed a network approach for molecular investigation and diagnosis of leukemia. The constructed network biomarkers not only achieve higher accuracy rate of diagnosis compared to known single biomarkers but also provide systematic insights into the leukemogenesis process. We noticed that we only considered the combination of genes (or the nodes) in the network for the prediction of leukemia. The interactions among genes can also provide valuable biological signatures for diagnosis of diseases. We will take the edge-variation in the network into the account for the further improving of the leukemia prediction.

Availability of Data and Materials

The authors declare no conflict of interest.