Background: Malnutrition and systemic inflammatory response are frequently associated with prognosis in patients with several types of cancer, including renal cell carcinoma (RCC). The study is aimed to investigate the ability of preoperative serum albumin to globulin ratio (AGR) to predict the long-term mortality of RCC patients.

Methods: The study is a retrospective study of an unselected cohort of 895 RCC patients who underwent a curative radical or partial nephrectomy at the Department of Urology in the Sun Yat-Sen University Cancer Center between January 2000 and December 2012 and had documented preoperative serum total protein and albumin (ALB) levels. The preoperative AGR was calculated as the ratio of ALB to (total protein-ALB) and its association with other clinical indices was assessed using survival analysis.

Conclusion: Preoperative AGR is a proven objective, reproducible, inexpensive survival predictor of RCC patients following surgical resection and should be considered for routine clinical use.

Renal cell carcinoma (RCC) is the most common malignant tumor of the kidney, with 66,800 and 62,700 estimated new cases occurring in China each year 1 and the United State in 2016 2, respectively. Incidental and early stage tumors have been detected more frequently because of increased use of imaging techniques including ultrasound and computed tomography (CT) in recent years 3-4. Although more RCC patients are diagnosed at early stage tumors, its mortality is still rising. Approximately 20% to 30% of patients with localized tumors after radical or partial nephrectomy will later develop metastatic disease 5. As renal tumors are insensitive to radiotherapy and chemotherapy, majority of metastatic patients die. Although the TNM system proposed by UICC and AJCC 6 and Fuhrman's Nuclear Grading system 7 are commonly used for prognosis, they are not entirely reliable 8. Other well-known prognostic factors are lymphocytic infiltration and histological subtype 8. Due to the insufficiency of these prognostic factors, new factors including clinical and laboratory indicators are being considered.

Increasing evidence supports the involvement of systemic nutritional status and inflammation in cancer progression 9-11. Albumin (ALB) and globulin (GLB) are the two major components of serum proteins. Hypoalbuminemia in cancer patients not only is an indicator of poor nutritional status but also relates to chronic inflammation 12-13. Furthermore, increased level of GLB could serve as a marker of chronic inflammation response and reflect a cumulative exposure of various pro-inflammatory cytokines 14. Recent studies have demonstrated that ALB to GLB ratio (AGR), which is calculated as AGR= ALB/(total protein-ALB), is an independent prognostic factor for breast cancer, lung cancer, nasopharyngeal carcinoma, colorectal cancer and so on 15-18. AGR level not only reflects the nutritional status but also represents the systemic inflammation. Thus, discriminating AGR might be a potential independent risk factor for RCC. However, to our best knowledge, the prognostic significance of AGR in RCC has not been reported. The aim of our research was to assess the prognostic significance of preoperative AGR in long-term survival of RCC patients and to evaluate whether it could provide additional prognostic information to well-established clinicopathological parameters.

The subjects of the retrospective study were a cohort of 912 consecutive RCC patients who underwent a curative radical or partial nephrectomy at the Department of Urology in Sun Yat-Sen University Cancer Center between January 2000 and December 2012. Among these patients, 17 patients (1.86%) had incomplete laboratory data. Thus, 895 patients were included in the analysis. The study was approved by the Institutional Review Board of Sun Yat-sen University Cancer Center and performed in accordance with the ethical standards of the World Medical Association Declaration of Helsinki 19. All included patients provided written informed consent and their information were recorded and registered in our cancer registry system.

Follow-up schedules were established and applied referring to the NCCN Clinical Practice Guidelines. RCC patients at early stage who need to be closely monitored after partial or radical nephrectomy (pT1a and pT1b) were subjected to follow-up evaluations every six months for the first 2 years and once a year thereafter. RCC patients at advanced stage were subjected to follow-up evaluations every 3-6 months for the first three years and once a year thereafter. The follow-up evaluations included all routine clinical, laboratory and radiological examinations. In addition, all patients were also followed up via telephone interviews. The last follow-up was completed in November 01, 2015. Patients who were still alive at the last follow-up were censored.

The end point of the study was overall survival (OS), which was defined as the time interval between the date of surgery and the date of death of individual patient. The optimal cut-off value of preoperative AGR was determined by using the receiver operating curve (ROC) analysis, as previously described 20-21. The threshold that best discriminated the differences between the survived and deceased cases (in terms of sensitivity and specificity) was used, allowing us to treat AGR as a dichotomous variable.

Baseline characteristics of all patients.

Identification of the optimal cut-off value for AGR

Serum ALB and serum total proteins levels were 43.10±4.80 g/L and 72.22±6.61 g/L, respectively. The calculated AGR was 1.54±0.34. ROC curves in Figure 1 showed that when analyzed as a dichotomous variable, AGR=1.47 as the cut-off value provided the strongest prognostic point for the OS. Therefore, this level was chosen to stratify patients. 371 patients with AGR ≤ 1.47 were classified into low AGR group, whereas 524 with AGR> 1.47 were classified into high AGR group. 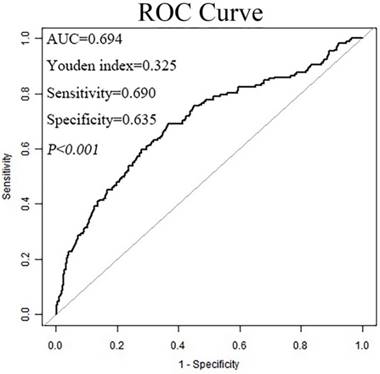 Association of AGR with the clinicopathological features of RCC patients

Characteristics of the 895 patients with RCC.

Association of preoperative AGR with OS

Association of preoperative AGR with subgroups 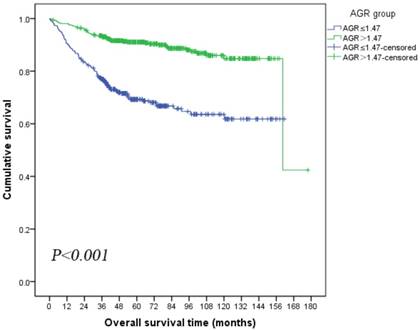 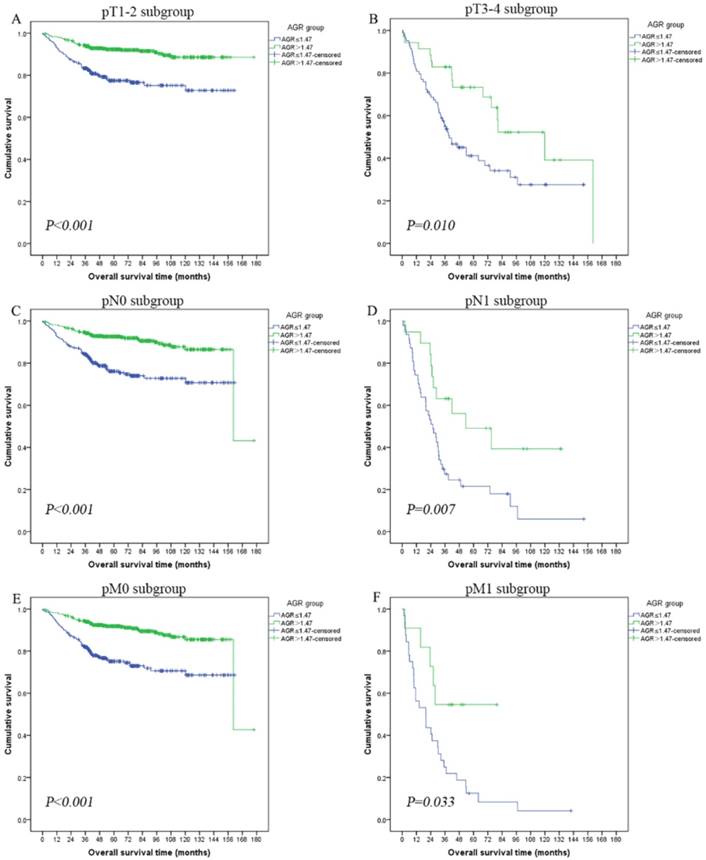 Correlation of basic characteristics in all patients to the overall survival (OS) by Cox regression analyses.

In our study, we demonstrated that preoperative AGR could be used as a prognostic factor of OS for RCC patients. Although several studies have shown a relationship between AGR and prognosis of patients with various types of cancers 15-18, 21, to our best knowledge, this is the first study to assess the value of preoperative AGR as a prognostic maker for predicting OS of patients with RCC.

Serum ALB and GLB are two main constituents of serum total protein and can be easily and cost-effectively measured, thus providing a simple means of estimating visceral protein function. Serum ALB is a hepatic protein with a half-life of 14-20 days. It functions as a carrier molecule for various minerals, hormones and fatty acids and also helps to maintain oncotic pressure in capillaries 22. In addition, Serum ALB is characterized as a negative acute-phase protein, and its pool is affected by a number of inflammatory conditions 23. Besides, a previous research revealed that serum ALB inhibited the proliferation of human breast cancer cell lines by modulating the activities of autocrine growth regulatory factors in vitro 24. Moreover, albumin synthesis might be suppressed by malnutrition and systematic inflammation, resulting in hypoalbuminemia, which could weaken human immune defense mechanisms. Recent studies have revealed that hypoalbuminemia was more attributed to systemic inflammation than malnutrition in the dialysis patients 25. As part of cancer-related systemic inflammation, activation of proinflammatory cytokines such as IL-6 and tumor necrotic factor-α could lead to low serum ALB concentration 26. In addition, elevated accumulation of acute phase proteins, immunoglobulins as well as other serum proteins may increase serum GLB level. These changes were reflective of an inflammatory state. Some researchers have demonstrated that serum GLB is associated with the prognosis of cancer patients 27-28.

Taken together, we hypothesized the AGR is a more accurate prognostic indicator than serum ALB or GLB alone. A large retrospective cohort study demonstrated that low AGR level was associated with an increased risk for cancer incidence and mortality in both short- and long-term follow-up in generally healthy population 29. Although cancer types are implicated, low AGR level is widely accepted to be linked to tumor progression 30. Based on observations that cancer often rises at the site of chronic inflammation and inflammatory cells are present in tumor sites 31, this phenomenon may be caused by chronic inflammation. We believe that nutritional status and systemic inflammatory response play major roles in the progression of RCC and preoperative AGR could be a prognostic indicator for RCC patients.

The study has several limitations. Firstly, some specific inflammatory markers such as C-reactive protein and cytokine levels, which were also important factors of inflammation, were not measured because they were not routinely measured at our hospital prior to 2006. Secondly, preoperative AGR was only assessed at a single time point before surgery and in a single center. Further large-scale population-based prospective studies are needed to fully consolidate the results.

Despite the aforementioned limitations, our study had some clinical implications. First of all, we are the first to show that low preoperative AGR may be a clinical indicator associated with shorter OS of RCC patients. Secondly, AGR is routinely measured at low cost in clinical practice, thus it has potential as a simple, convenient predictive and stratification factor to assist with clinical decision-making for RCC patients. Thirdly, at least in theory, AGR is a predictive factor superior to other nutritional or inflammatory indicators. Nutritional assessment and support as well as anti-inflammatory therapy may be suitable treatment choices for patients with AGR ≤1.47. Although Algra et al. have demonstrated the ability of anti-inflammatory therapy (e.g., aspirin and other non-steroidal anti-inflammatory drugs) to prevent and/or treat some cancers32, the value of anti-inflammatory therapy for RCC patients needs to be further studied. At least, AGR can provide a useful tool for future clinical trials and patient management.

In conclusion, preoperative AGR is a proven objective, reproducible and inexpensive predictor of survival of RCC patients subjected to surgical resection and consideration should be given for its routine clinical use.

The serum albumin to globulin ratio (AGR) not only reflects patients' nutritional status but also represents their systemic inflammation. This prospective cohort study of 895 patients with renal cell carcinoma (RCC) showed that preoperative AGR was an independent prognostic indicator of overall survival (OS) of RCC patients.

Final Approval of Manuscript: All the authors.

All the authors state they have no conflicts of interest.