Purpose: To investigate the prognosis of esophageal squamous cell carcinoma with a microscopically incomplete (R1) resection margin following an esophagectomy, as well as the impact of adjuvant treatment on survival.

Methods: Data obtained from 124 patients with R1-resected ESCC were reviewed. The impact of clinicopathological factors and adjuvant treatment on the overall survival, locoregional recurrence, and distant recurrence were explored.

Esophageal cancer represents 7% of all gastrointestinal malignancies worldwide and affects more than 400,000 individuals annually [1]. In China, the estimated number of new cases of esophageal cancer is 477,900 per year [2], most of which consist of squamous cell histology. Surgical resection is an essential component of definitive treatment for locoregionally confined esophageal squamous cell carcinoma (ESCC). The goal of surgery is to achieve a complete resection of the tumor; however, 8.5-36.5% of patients have a microscopic (R1) residual tumor at the surgical margin [3,4]. The prognosis and optimal adjuvant treatment for R1-resected ESCC are unclear.

A recent systematic review of 19 studies indicated that a positive circumferential margin was associated with a poor prognosis, especially in patients who received neoadjuvant therapy and had T3 stage disease [5]. This review grouped microscopically (R1) and macroscopically (R2) incomplete resections together and included both adenocarcinoma and ESCC. Another large, multicenter, European study compared 242 patients with an R1 resection with patients who received an R0 resection and suggested that an R1 resection margin was an indicator of poor long-term survival (median overall survival (OS): 17.4 vs. 28.0 months, respectively). ESCC accounted for approximately half of the cohort [2].

Recognizing the negative impact of an R1 resection margin on survival, clinicians have employed adjuvant approaches to improve survival. For individuals with R1-resected ESCC who have not received preoperative chemoradiation or chemotherapy (CT), the National Comprehensive Cancer Network (NCCN) recommends postoperative chemoradiation [6]. However, due to the rarity of this situation, limited data exist, and definitive recommendations are lacking. Some studies have suggested a survival benefit of adjuvant chemo(radio)therapy for an R1 resection margin [3], whereas other studies have not supported this finding [7]. Poor tolerance of adjuvant therapy after major surgery is a substantial concern. Moreover, whether and how to administer adjuvant treatment remain questionable.

Therefore, the aim of this study is to investigate the prognosis of patients with R1-resected ESCC as well as the role of adjuvant treatment on survival.

Data of patients who underwent curative surgery for esophageal cancer in our center from 2000 to 2015 were retrospectively reviewed. The inclusion criteria consisted of squamous cell histology, pathological stage I-III, and an R1 resection margin. Patients who received neoadjuvant radiation, hormone therapy, or immunotherapy were excluded. According to the criteria of the College of American Pathologists [8], an R1 resection margin was defined as the presence of microscopic residual tumor at the circumferential, vertical or lateral margins of the surgical specimen. The pathological stage was classified according to the TNM staging system proposed by the American Joint Committee on Cancer (7th edition). Following the standard practice in our institution, all pathology specimens were examined by two pathologists. The final cohort consisted of 124 patients. The data collected included demographic characteristics, surgical and perioperative treatments, pathological results, recurrence information, survival outcomes and toxicity. Adjuvant treatment was defined as radiotherapy and/or chemotherapy that initiated within two months of surgery. The sufficiency of adjuvant chemotherapy was defined as three-weekly regimen of more than 2 cycles, or weekly regimen of more than 4 cycles. The Institutional Review Board approved the database and study design. Informed consent for data collection was obtained prior to treatment.

The beginning of the follow-up period was defined as the date of surgery. Clinical examinations, thoracoabdominal computed tomography, and upper gastrointestinal endoscopy were performed every 3-6 months until the disease progressed. Bone scans or PET scans were administered when distant metastases were suspected. The OS, locoregional recurrence (LR), and distant recurrence (DR) were recorded. Histological, cytological, or unequivocal radiological proof was required before a diagnosis of disease recurrence. LR was defined as recurrences within the area of resection, anastomotic sites or locoregional lymph nodes, including the mediastinum, supraclavicular fossa, and coeliac trunk region. DR included metastases to solid organs, pleura, peritoneum, and non-regional lymph nodes. OS was defined as the period from the date of surgery to the date of death from any cause or the last visit prior to December 31, 2015. The locoregional recurrence-free survival (LRFS) and distant recurrence-free survival (DRFS) were calculated as the time from the date of surgery to the date of LR and DR, respectively, or to the last visit prior to December 31, 2015. Adverse events were classified according to Common Terminology Criteria for Adverse Events (CTCAE) version 4.0.

Continuous variables are presented as medians (range) or means±standard deviation. Categorical variables are presented as percentages. The Kaplan-Meier method was used to estimate the OS, LRFS, and DRFS. The survival variables in the different subgroups were compared using a two-sided log-rank test. The variables with a p-value <0.05 in the univariate analysis were included in a multivariate analysis using the Cox's proportional hazards regression model. The statistical analysis was performed using SPSS Statistics ver. 19 for Windows (IBM Corporation, Armonk, NY, USA), and differences were considered significant at a p-value <0.05.

The clinical and pathological characteristics of 124 patients with R1-resected ESCC are listed in Table 1. The median age of the patients was 57 years (range: 33-83 years). Males predominated with a male to female ratio of 4.39. The Eastern Cooperative Oncology Group (ECOG) performance status (PS) was 0-1 in 112 patients (90.3%) and 2 in 12 patients (9.7%). Twenty patients (16.1%) had a weight loss ≥10% over a 6-month period prior to surgery. The middle thoracic esophagus (54.8%) was the most common location of primary tumors. The approach for surgery was Mckeown (26.6%) for upper and advanced middle thoracic tumor; Ivor Lewis (12.1%) or a laparotomy with a left thoracotomy (60.5%) for lower and middle thoracic tumors. The mean number of lymph nodes harvested during surgery was 19.3±5.0. Adjuvant therapy was administered at 27-42 days (median: 32 days) after surgery in 78 patients (62.9%) and included adjuvant CT alone in 28 patients, radiotherapy (RT) alone in 26 patients, concurrent chemoradiotherapy (CCRT) in 17 patients, and sequential chemoradiotherapy (SCRT) in 7 patients. The most common regimen for adjuvant CT was taxol plus cisplatin every three weeks (n=21). The median dose for adjuvant RT was 60 Gy (range: 44-70 Gy). The CT regimens administered concurrently with RT included weekly cisplatin (n=3), weekly docetaxel plus cisplatin (n=3), 5-fluorouracil plus cisplatin every three weeks (n=3), and other regimens.

† Weight loss was assessed over a 6-month period prior to surgery, and information regarding weight loss was obtained in 112 patients; 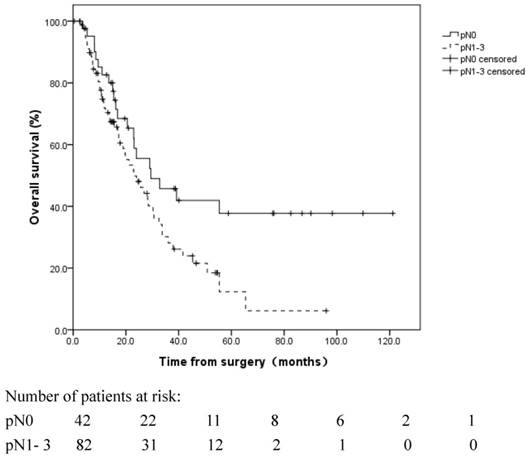 Overall survival of R1-resected patients with and without adjuvant chemotherapy (CT). Adjuvant CT improved the median OS from 20.5 to 32.5 months (log rank, p=0.032). 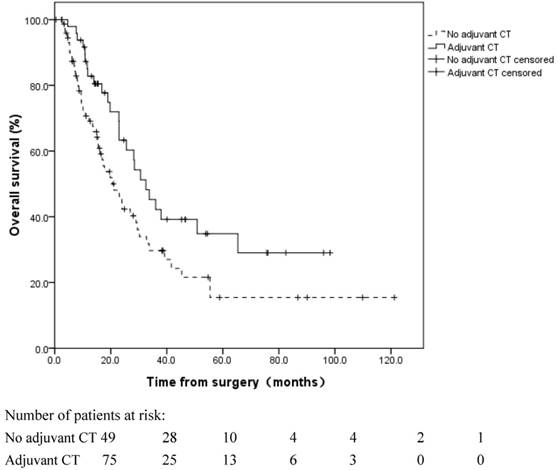 Fifty patients received adjuvant RT±CT. An additional 13 patients did not receive adjuvant RT; however, they received salvage RT following a locoregional recurrence (Table 3). No significant difference was observed in the OS between these two subgroups (log rank, p=0.908), with a median OS of 29.5 and 30.6 months in the patients who received adjuvant RT and salvage RT, respectively (Figure 4).

4. Univariate and multivariate analyses of LRFS and DRFS 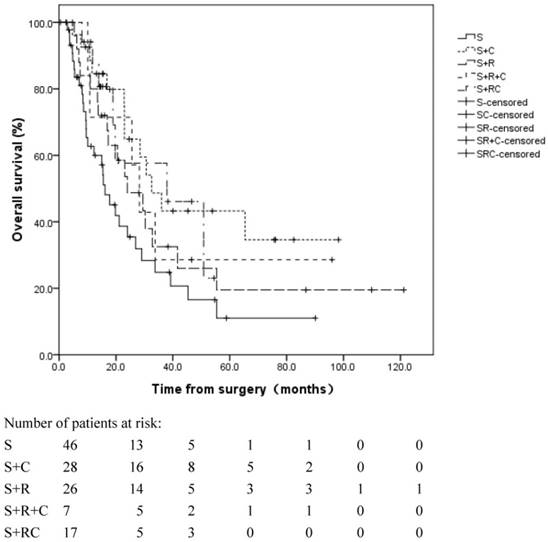 Overall survival for patients with adjuvant radiotherapy (RT) following esophagectomy and patients with salvage RT following locoregional recurrence. No significant difference was observed in the OS between these two groups (log rank, p=0.908). 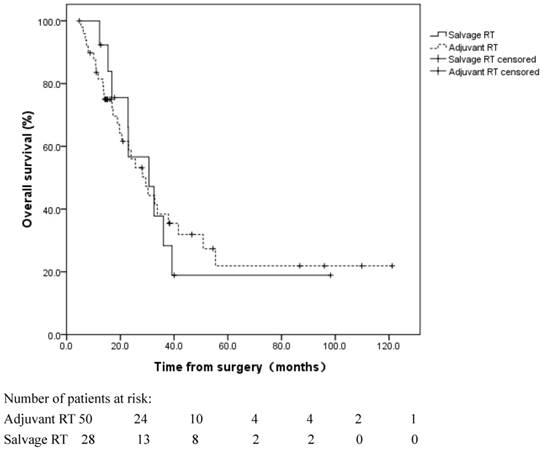 The R0 resection rate following esophagectomy has increased in recent years due to improved surgical techniques and standard surgical practices [9]; however, R1 resection remains a problem, especially in patients with an upper third esophageal primary tumor, locally advanced disease, and previous malnutrition [3]. R1 resection has been associated with a poor prognosis in many cancer types, including pancreatic, rectal, and lung cancers [10-12]. With respect to ESCC, controversy exists regarding the prognosis and optimal adjuvant treatment for an R1 resection margin.

An analysis of the clinicopathological prognostic factors following esophagectomy in esophageal cancer indicated that resection margin involvement was a negative prognostic factor of survival [13]. Adjuvant therapy was often provided to address the surgical insufficiency in R1-resected ESCC. In a study of esophageal cancer by Markar SR, an R1 resection margin was confirmed to be associated with reduced survival and increased LR in a propensity matched analysis [3]. This study involved 242 R1-resected patients, including 112 patients with ESCC. Adjuvant therapy was provided to 86 of the 242 R1-resected patients (35.5%), which reduced distant metastases and improved the OS. In our study population, adjuvant therapy was offered to 78 patients (62.9%). Adjuvant CT significantly improved the median OS from 20.5 to 32.5 months (p=0.032). The increased percentage of patients who received adjuvant therapy in our cohort may explain, in part, the longer median survival time in our study compared to the study by Markar SR (25.6 vs. 17.4 months, respectively). 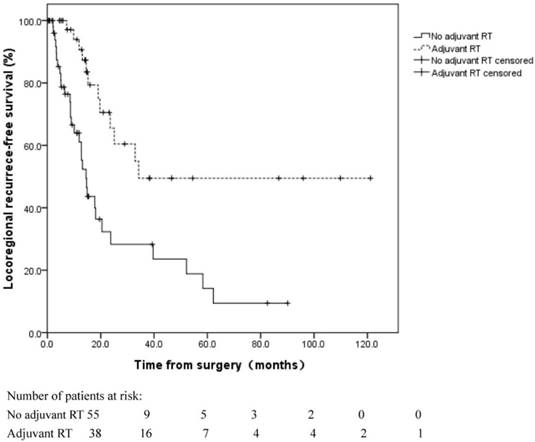 LR is the main cause of failure in patients undergoing radical esophagectomy [14]. The LR rate has been reported to be 30% in R0 resection and 60% in R1 or R2 resection [15]. Adjuvant RT following radical surgery has been reported to reduce the incidence of LR. However, findings regarding the role of adjuvant RT on survival are conflicting [16-20]. In our cohort of R1-resected patients, LR remained the primary cause of failure. Adjuvant RT significantly decreased the incidence of LR; however, it failed to improve the OS. This finding highlights the importance of salvage therapy following LR. After LR, definitive CRT remains feasible for patients who have not previously received adjuvant RT. Our previous study demonstrated that CCRT was effective for recurrent ESCC following esophagectomy. Patients with recurrent disease who responded well to CCRT achieved long-term OS [21]. In the current study, 13 patients who received salvage RT for LR achieved an OS of 30.6 months, which was comparable to patients who received adjuvant RT. Therefore, the benefit of adjuvant RT for OS might be diluted by the salvage therapy provided after recurrence. The timing of RT in R1-resected patients remains debatable.

Phase III trials that have compared surgery plus adjuvant CT to surgery alone for localized ESCC have indicated no benefit in OS [22,23]. In the R1-resected subgroup, the role of adjuvant CT must be investigated. Our study demonstrated that adjuvant CT was an independent prognostic factor for OS, which supports the use of adjuvant CT after an R1 resection in ESCC patients.

Neoadjuvant CCRT has been established as a standard of care for locally advanced ESCC [24,25]. Compared with surgery alone, neoadjuvant CCRT plus surgery decreased the rate of incomplete surgery and improved the locoregional control and OS. For R1-resected patients without previous neoadjuvant RT, CCRT may be offered in adjuvant settings to achieve better disease control. However, in this study, the multivariate analyses did not support the use of adjuvant RT. This finding was consistent with the findings of Markar SR [3]. The insufficiency of adjuvant CCRT in R1 patients, combined with the fact that neoadjuvant CCRT increases the R0 resection rate, highlights the importance of the optimal administration of multidisciplinary approaches to avoid incomplete surgery.

To the best of our knowledge, this investigation is the first study to address the role of adjuvant therapy in R1-resected ESCC in detail. However, the current study has several limitations that should be considered. As a retrospective and observational study, the surgical technique, dose of adjuvant RT, and regimen of adjuvant CT were not uniform among the patients. Despite the inclusion of potential prognostic variables in the univariate and multivariate analyses of survival, other confounding factors may exist that were not considered. A prospective study with controlled regimens is warranted to determine the optimal therapy for R1 resection following an esophagectomy.

This retrospective study of 124 patients provided information regarding the management of R1-resected ESCC following an esophagectomy. According to our results, adjuvant RT reduced the LR; however, it did not improve the OS. Adjuvant CT provided survival benefits. A prospective study is required to confirm these findings.