Recent studies demonstrated that long non-coding RNAs (lncRNAs) deregulated in many cancer tissues including nasopharyngeal carcinoma (NPC) and had critical roles in cancer progression and metastasis. In this study, we aimed to assess a lncRNA LINC01420 expression in NPC and explore its role in NPC pathogenesis. Our research revealed that the expression level of LINC01420 in NPC tissues were higher than nasopharyngeal epithelial (NPE) tissues. Moreover, NPC patients with high LINC01420 expression level showed poor overall survival. Knockdown LINC01420 inhibited NPC cell migration and invasion in vitro. In summary, LINC01420 may play a critical role in NPC progression and may serve as a potential prognostic biomarker in NPC patients.

Head and neck cancer includes carcinomas arising from the mucosal epithelia of the head and neck region as well as various cell types of salivary glands and the thyroid [1]. Nasopharyngeal carcinoma (NPC) is a kind of head and neck cancers, derived from the epithelial lining of the nasopharynx [2]. NPC is rare (annual incidence, < 1/100,000) in most parts of the world. However, it is endemic in regions such as southern China and Southeast Asia, where the annual incidence ranges from 3 to 30 per 100,000 persons. Epstein-Barr virus, environmental influences and heredity each play important roles in NPC development [3-10]. Undifferentiated carcinoma is the most common histological type of NPC and is associated with advanced local regional disease at diagnosis and a high incidence of distant metastasis. Distant relapse remains the major cause of treatment failure in NPC [11-17].

Long noncoding RNAs (lncRNAs) are non-protein-coding transcripts that are > 200 nucleotides in length and reside in the nucleus or cytoplasm [18]. Although the function and mechanism of most lncRNAs remain unknown, accumulated evidence suggests that lncRNAs play important roles in the transcriptional, epigenetic, and post-transcriptional regulation of gene expression. More and more evidence has shown that lncRNAs are capable of influencing various cellular processes such as proliferation, cell cycle progression, cell growth, apoptosis and metastasis [19-22].

To find functional lncRNAs in NPC, we analyzed 2 previously published online datasets to find dysregulated lncRNAs in head and neck cancer. One novel lncRNA, LINC01420, was significantly overexpressed in the two head and neck cancer datasets. Then we examined the expression of LINC01420 in NPC tissues and demonstrated that LINC01420 might play a critical role in NPC progression and prognosis as a potential prognostic biomarker.

Two sets of tissue samples were collected for this study: Set 1 contained 26 NPC and 10 non-tumor NPE biopsies to verify LINC01420 expression with real-time PCR; Set 2 included 110 paraffin-embedded NPC tissue samples for in situ hybridization to confirm the expression of LINC01420. All tissue samples were collected from newly diagnosed NPC patients without any treatment at the Xiangya Hospital and the Affiliated Cancer Hospital of Central South University (Changsha, China). All the samples were handled according to the ethical and legal standards and approved by the Research Ethics Committee of the Xiangya Hospital and the Affiliated Cancer Hospital of Xiangya school of Medicine. All patients provided informed consent before surgery. After these specimens were confirmed by histopathological examination, these patients had received routine radiotherapy, and all of them were sensitive to radiotherapy [23].

To find functional lncRNAs in NPC, we downloaded two head and neck GEO expression data from GEO database: GSE6791 and GSE30784 (Affymetrix Human Genome U133 Plus 2.0 platform). We used Significant Analysis of Microarray (SAM) software to analyze the expression of lncRNAs between the non-tumor NPE biopsies and NPC tissue samples in the two datasets. The cut off value for differentially expressed lncRNA was set at ≥1.2-fold change and the false discovery ratio (FDR) was < 0.05.

The sequences of LINC01420 ISH probes: Probe-1: 5'-ATTTAAAGAGGGTGGGATTTGGTCAGAAACTCAC-3'; Probe-2: 5'-CAGGACTTGGACCTTCAACACGAAAAATTCAGAAT-3'; Probe-3: 5'-CACTTGAGAAAACCACTGTAGGACAAGAACAACAT-3'. The probes were synthesized and labeled with DIG-dUTP at the 3' and 5' end (Invitrogen, Shanghai, China). In situ hybridization was performed as previously described [12]. All sections were independently scored by two pathologists who were blinded to the clinicopathological features and the clinical data.

Three sequences of LINC01420 targeting siRNAs were: 5'-CAUCUCAGGUCUCUUGGCUUUGCCA-3'; 5'-GCGUUGGGAUUAUCCGGAAGGAACU-3'; and 5'-CCUCUGAGAUUUAAGGCCAUGCCCU-3'. Sequences of non-target scramble controls were provided by Invitrogen.

Cell migration was evaluated using a Transwell assay. A total of 2 × 104 cells in 200 µl of serum-free medium were added to the top chamber of the transwell (8 µm pore size, BD Biosciences, New Jersey, USA) at 24h after siRNA transfection. The bottom well contained growth medium with 20 % FBS. Cells were incubated at 37°C for 24 h. After 24 h, the cells that had migrated to the lower face of the filters were fixed with 100% methanol and stained with 0.5% crystal violet and counted [24, 25].

Matrigel invasion assays were performed as described previously [34]. Briefly, filters coated with Matrigel in the upper compartment were loaded with 200µl serum-free medium containing 5 × 104 transfected cells, and the lower compartment filled with 20% FBS. After 24 h, migrated cells on the bottom surface were fixed with 100% methanol and counted after staining with 0.5% crystal violet.

Numbers of invaded cells were counted in six randomly selected fields under a microscope, and the average value was calculated. Each experiment was conducted in triplicate.

The expression levels of LINC01420 in NPC and NPE tissues were analyzed by unpaired t test. The chi-square and t tests were performed to assess the relationship between LINC01420 expression and clinicopathological features. Overall survival (OS) was calculated using the Kaplan-Meier method, and the results of the analysis were considered significant in a log-rank test if p < 0.05.

LINC01420 is highly expressed in head and neck cancer

LINC01420 is overexpressed in NPC 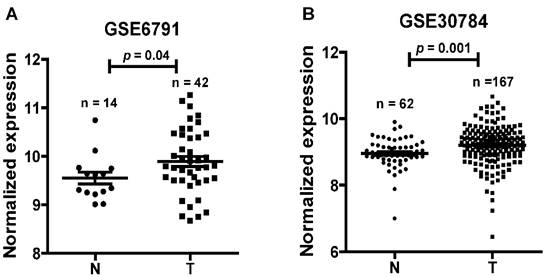 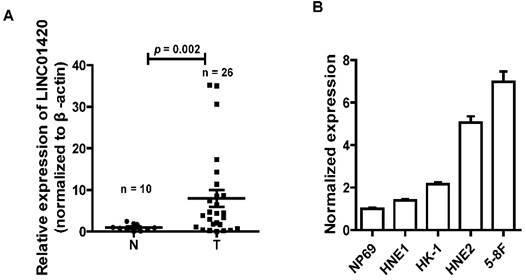 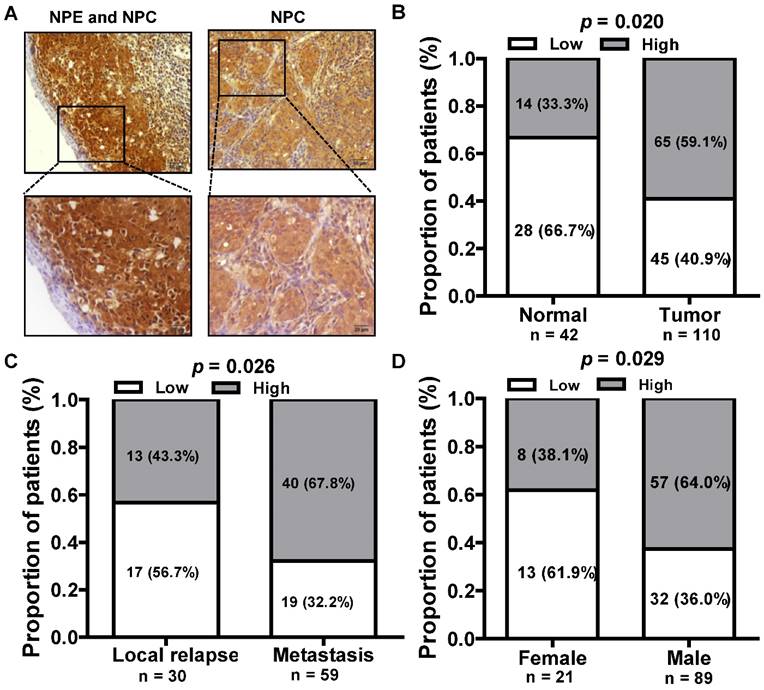 Knockdown of LINC01420 inhibited cell migration and invasion in NPC

We also explored the effect of LINC01420 knockdown on NPC cell migration/invasion. First, the expression of LINC01420 was examined and successfully decreased after knockdown by a mixture of three siRNAs in 5-8F cells (p < 0.001, Fig. 5A). Then, cell migration capacity was evaluated using a Transwell assay without Matrigel. The results showed that knockdown of LINC01420 inhibited 5-8F cells migration capacity compared to the control group (p = 0.045, Fig. 5B). Matrigel invasion assays also demonstrated that 5-8F cells transfected with LINC01420 siRNAs had lower invasive capability (p = 0.001, Fig. 5C). 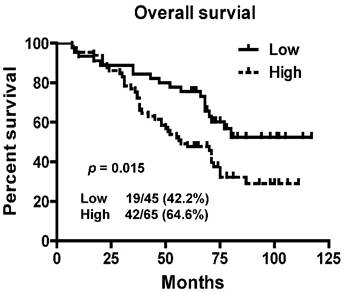 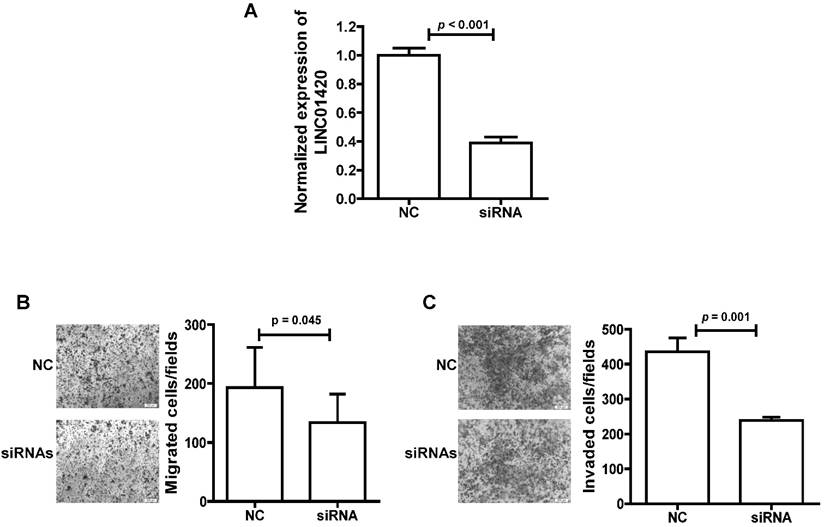 Cancer is still the major cause of morbidity and mortality in most areas in the world [35]. The incidence of NPC is high in endemic regions, with a 5-year overall survival rate of approximately 70% [36]; thus, it is important to identify new molecular targets for the diagnosis, prognosis, and treatment of NPC.

LncRNAs participate in many biological processes and many studies have implicated that abnormal expression of lncRNAs is closely related to the occurrence and development of malignant tumors [37-40]. Several lncRNAs were shown to be associated with NPC and indicate poor prognosis, including LINC00312 [23], H19 [41], NEAT1 [42], HNF1A-AS1 [43], HOTAIR [44], AFAP1-AS1 [34] and lncRNA-LET [45]. LINC01420 is a new lncRNA which is firstly reported in this paper.

In this study, we reported a novel functional lncRNA LINC01420 which was significantly high expressed in NPC samples and correlated with a poor prognosis of NPC patients. LINC01420 was poly (A)-positive and locates on chr X (p11.21). As we all know, there is a famous lncRNA, Xist (X inactive specific transcript), locating in the X inactivation center and its product is transcribed from the inactive X chromosome [46]. It is typically expressed by all female somatic cells but lost in female breast, ovarian, and cervical cancer cell lines [47-49]. In mammals, X chromosome inactivation (XCI) is triggered by Xist to equalize gene expression between the sexes [50]. Studies demonstrated that Xist directly interacts with SHARP to silence transcription through HDAC3 [51] and the histone deacetylase inhibitor abexinostat induces cancer stem cells differentiation in breast cancer with low Xist expression [52]. While another research reported that Xist reduction in breast cancer upregulated AKT phosphorylation via HDAC3-mediated repression of PHLPP1 expression [53]. Xist also play important role in cervical cancer [54], non-small cell lung cancer [55] glioblastoma [56] and so on. In our study, we found that LINC01420 is significantly high expressed in male NPC patients. The role of LINC01420 as an lncRNA in gender is worth of our further study.

In summary, the findings presented in this study suggested that LINC01420 expression was commonly high expressed in NPC and significantly correlated with the distant metastasis in NPC patients. Furthermore, high expression of LINC01420 was an independent poor prognostic for NPC patients. We also found that the LINC01420 knockdown significantly suppressed the invasive abilities of tumor cells, indicating that further investigation of LINC01420 might lead to the development of novel tumor therapies.

The authors declare that there are no conflicts of interest in this work.

46. Brown CJ, Ballabio A, Rupert JL. et al. A gene from the region of the human X inactivation centre is expressed exclusively from the inactive X chromosome. Nature. 1991;349:38-44