Downregulation of ARID1A, a component of the SWI/SNF chromatin remodeling complex, in breast cancer

Condensation of chromosomal DNA by nucleosomes is an essential biological process to store the large amount of DNA in the nucleus, but occludes many regulatory DNA elements. Chromatin remodeling complexes are critical for transcription by facilitating access to packaged DNA [see review in 1]. The SWI/SNF-related, matrix-associated, actin-dependent regulators of chromatin (SMARC), also called BRG1-associated factors (BAFs), have been identified as components of the human SWI/SNF-like chromatin-remodeling protein complexes [2]. AT-rich interactive domain-containing protein 1A (ARID1A; also known as BAF250a, p270, and B120, and SMARCF1) is a subunit of the SWI/SNF chromatin remodeling complex, which possesses DNA binding activity [3-6]. ARID1A contributes to the specific recruitment of its chromatin remodeling activity by binding to transcription factors and transcriptional coactivator/corepressor complexes [7]. As expected by the central role of ARID1A in the chromatin remodeling machinery, the ablation of ARID1A results in early embryonic developmental arrest [8].

In contrast, early pathobiological analysis revealed that mutation in the ARID1A gene results in the development of several malignant tumors [6, 9]. The high prevalence of inactivating ARID1A mutations in endometrial and clear cell carcinomas of the ovary or uterus also suggests that loss of ARID1A function contributes to carcinogenesis in these tumors [10-12]. Furthermore, growing evidence indicates that ARID1A may have a widespread role in the suppression of various tumors [see review in 13]. However, the mechanisms by which mutations in the ARID1A gene drive tumorigenesis are largely unclear. Especially, why insufficient ARID1A expression is linked to tumorigenesis instead of cancer cell death remains a mystery. In addition, the prognosis value of ARID1A expression remains debatable in many cancers.

A mouse-specific monoclonal (clone PSG3) and conventional rabbit antibodies against ARID1A were purchased from Santa Cruz Biotechnology (Santa Cruz, CA, USA) and GeneTex (San Antonio, TX, USA), respectively. We also generated a murine monoclonal antibody against human ARID1A expressed in bacteria. The detailed procedure for preparing recombinant proteins and the establishment of the hybridoma according to the method of Köhler and Milstein were previously described [3]. The characterization of the generated antibody against human ARID1A is described in (Figure S1). A rabbit specific antibody against RAB11FIP1 was purchased from GeneTex.

Curves for disease free survival were drawn using the Kaplan-Meier method and the differences in survival rates were compared using the log-rank test for univariate survival analysis. Multivariate analysis was performed using the Cox proportional hazards model and the R statistics system. A p value of <0.05 was considered statistically significant.

The detailed procedure for siRNA silencing of a target gene has been previously described [16]. In this study, we employed the Origene (Origene Technologies, Inc. Rockville, MD, USA) siRNAs. 5′-rArGrArUrCrArCrCrArArGrUrUrGrUrArUrGrArGrCrUrGGG-3′ (SR305421A), 5′-rArCrArGrArArGrArArUrGrArUrCrCrArUrUrUrGrUrGrGTG-3′ (SR305421B), and 5′-rArGrArCrUrArCrArArUrGrUrArUrCrArArCrArGrCrArACA-3′ (SR305421C). A Trilencer-27 Universal scrambled negative control siRNA (Origene) was used as a non-silencing control. siRNAs were transfected into cells using lipofectamine™ RNAiMAX following the manufacturer's instructions (Invitrogen, Carlsbad, CA, USA). At 48 h after transfection, the cells were used for subsequent studies.

We utilized the Human Whole Genome DNA Microarray system (SurePrint G3 Human 8x60K ver. 2.0, Agilent Technologies, Santa Clara, CA, USA) to obtain the altered gene expression profile for MDA-MB-157 cells in which the ARID1A gene was silenced by siRNA. cDNA synthesis from the total RNA and subsequent PCR were performed using a RT-PCR kit (Takara, Ohtsu, Japan). The procedure was performed according to the manufacturer's instructions, as previously described [15]. Real-time PCR reactions were performed using the SYBR Green reaction kit according to the manufacturer's instructions (Roche Diagnostics, GmbH, Mannheim, Germany) in a LightCycler (Roche Diagnostics). cDNA (2 μL each) was diluted to a volume of 20 μL with the PCR mix containing a final primer concentration of 0.2 pmol.

To ensure that the SYBR green was not incorporated into primer dimers or non-specific amplicons during the real-time PCR runs, the PCR products were analyzed by polyacrylamide gel electrophoresis in preliminary experiments. Single bands at the expected sizes were obtained in all instances. The samples were cultured in triplicate and the expression of each target gene was analyzed by the 2-ΔΔCT method described by Livak and Schmittgen [17] using the LightCycler system. The ΔCT values were normalized to GAPDH for each triplicate set in both the Trilencer-27 Universal scrambled negative control siRNA-treated (control) and si-ARID1A-treated groups. The values for the si-ARID1A -treated group were then calculated for each target gene as the fold change relative to the mean values for the control group (control; set to 1.0). The standard deviations were then computed for the triplicate sets, namely, the 3 target genes and the fold changes are presented. In addition, Student's t-tests were performed to determine significant differences. P < 0.05 was considered statistically significant.

The invasiveness of the cultured cells was determined using 24-well BD BioCoat Matrigel Invasion Chamber Plates (BD Falcon) according to the manufacturer protocol as previously described [16]. Briefly, 1 × 105 cells were placed in the upper compartment of the invasion chamber. After 48 h of incubation with DMEM containing 10% (lower chamber) or 0% (upper chamber) FBS, the non-invading cells were gently removed from the filter by scrubbing with a cotton-tipped swab. The cells on the lower surface of the filter were counted under a microscope. Experiments were performed in triplicate, and mean and standard deviation values were calculated.

In this study, we mainly used a newly generated murine monoclonal antibody to determine ARID1A expression by immunohistochemical staining. In addition, we used two commercially available antibodies, a conventional rabbit antibody and murine monoclonal antibody against ARID1A, on several tissue specimens to confirm the results. We obtained similar results with the three antibodies.

Representative results from the immunohistochemical staining are shown in Figure 1. In this study, we examined ARID1A expression in archived pathological tissue specimens from patients with invasive ductal carcinoma. ARID1A immunoreactivity was scored as the sum of proportional intensity (Score 0 to 5) and intensity score (Score 0 to 3). Subsequently, ARID1A immunoreactivity was classified into four groups (total score 0 or 1, 2 or 3, 4 to 6, and 7 or 8) and subsequently correlated with the prognosis of the patients. The results are summarized in Figure 2. Surprisingly, the disease free survival rate of patients with score 2 or 3 was significantly worse than that of the other groups. Unexpectedly, severe loss of ARID1A immunoreactivity (score 0 or 1) or no loss of ARID1A immunoreactivity (score 7 or 8) had no significant effect on the prognosis of the patients. In the multivariate Cox regression model, nodal metastasis (p=0.0017), triple negative (estrogen receptor-negative, progesterone receptor-negative and HER2-negative) (p=0.043), and partial loss of ARID1A (p=0.0385), were independent prognostic factors. 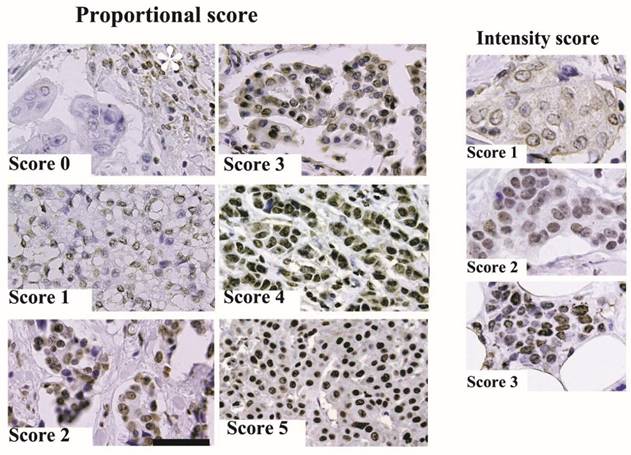 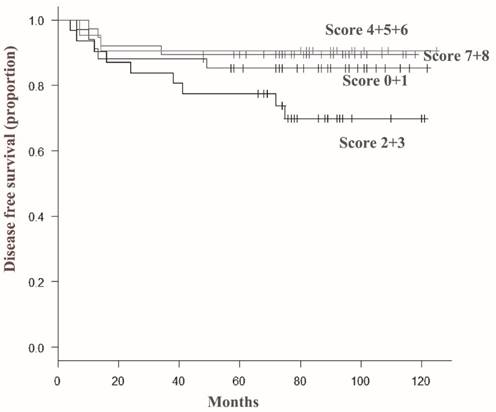 In order to examine the molecular mechanism linked to poor prognosis of patients with partial loss of ARID1A in breast cancer cells, we further performed in vitro experiments. By using Human Whole Genome DNA Microarray system (Agilent Technologies), we determined that an approximately 20% reduction of ARID1A mRNA level resulted in the reduction, less than 50%, of the expression of about 772 genes, while it upregulated by 2 folds the expression of 468 genes in MDA-MB-157 breast cancer cells (Figure S2 and Figure S3). Microarray data are deposited in the GEO public database (Array data accession number: GSE72669).

Interestingly, RAB11FIP1 mRNA expression was significantly upregulated by the 20% reduction of ARID1A mRNA level. Since RAB11FIP1 is a human breast cancer-promoting gene with Ras-activating function, we further examined the relation between ARID1A and RAB11FIP1 expression. 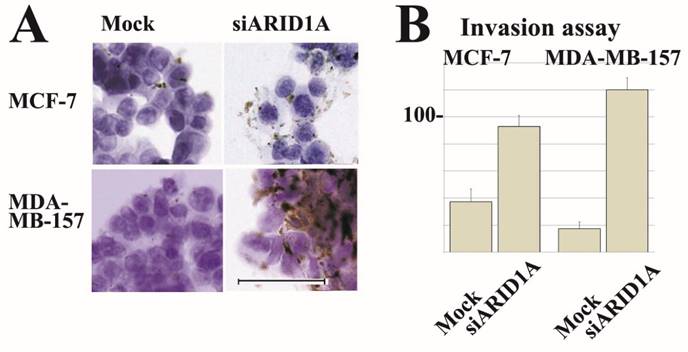 Subsequent comprehensive gene expression analysis unraveled that most protein-encoding genes were repressed by a 20% reduction of the ARID1A mRNA level in breast cancer cells. However, no tumor suppressor encoding gene was identified among the genes repressed by the partial ARID1A-depletion in breast cancer cells. In contrast, we determined that RAB11FIP1 gene expression was significantly upregulated by the 20% reduction of the ARID1A mRNA level. In the present microarray analysis, we found that 468 genes were up-regulated over 2-fold by partial down-regulation of ARID1A. However, we also noted that signal intensity of Immunoglobulin λ gene expression was 0.06 (normalized value) in 20%-ARID1A-reduced MDA-MB-157 cells. Except for this noise, approximately 165 gene sequences were up-regulated by partial down-regulation of ARID1A. However, most of these sequences included miscRNA, lincRNAs, or unknown gene sequences, which are out of the scope of this study. Finally, we identified RAB11FIP1 as a candidate molecule in partial down-regulation of ARID1A-mediated breast carcinogenesis.

RAB11FIP1 (also known as Rab-coupling protein, RCP) is often overexpressed in breast cancer as a prime oncogene candidate [14]. RAB11FIP1 plays a role in the Rab-11 mediated recycling of vesicles, i.e., endocytic sorting, trafficking of proteins, and transport between the recycling endosome and the trans-Golgi network [26-28]. RAB11FIP1 plays roles in endosomal trafficking and receptor sorting, including trafficking of integrin α5β1. Integrin α5β1 is a receptor for fibronectin and contributes to cancer cell invasion, metastasis, and resistance to anticancer drugs and is believed to decrease survival in patients [29, 30]. In the present study, we also found that partial down-regulation of ARID1A increased RAB11FIP1 expression, resulted in accumulation of integrin α5β1 on breast cancer cell surface membrane, and significantly up-regulated invasion activity.

Notably, 50% or >90% reduction of ARID1A gene significantly reduced RAB11FIP1 mRNA in breast cancer cells in vitro. The exact molecular mechanism, which was responsible for up-regulation of RAB11FIP1 expression via partial loss of ARID1A expression, remains unclear.

We speculate that insufficient chromatin remodeling, probably caused by partial ARID1A reduction, may alter the three-dimensional structure of the promoter region of the RAB11FIP1 gene. As a result, partial loss of ARID1A increases RAB11FIP1 expression and may result in poor prognosis in patients with invasive breast cancer.

In turn, RAB11FIP1 could be a novel target for the development of therapeutics for patients with breast cancer harboring partial ARID1A loss.

In summary, the present study indicates the important pathobiological role of partial loss of ARID1A in invasive breast cancer.