Results: A number of features known to sensitize tumors for different targeted therapies could be identified, which hopefully improve the clinical management of this subgroup of lung neoplasias. In particular, EGFR expression was observed in the investigated tumors in a noteworthy manner. Additionally, MDM2 was strongly expressed in the majority of all samples whereas the expression of its physiological inhibitor, CDKN2A, was nearly absent in all low-grade tumors. TP53 showed a high frequency of variants in high-grade tumors but mutations were rare in carcinoids.

Conclusion: Based on our results, therapeutic approaches with MDM2-inhibitors and monoclonal anti-EGFR antibodies may be promising in pulmonary carcinoid tumors.

Lung cancer is the leading cause of cancer-related deaths worldwide [1-3], twenty-five percent of these belong to the group of neuroendocrine tumors [4]. These tumors encompass small-cell lung carcinoma (SCLC), large-cell neuroendocrine carcinoma (LCNEC), as well as typical (TC) and atypical carcinoids (AC) [5]. Patients suffering from TC have excellent survival rates with 87-100%, but some present with lymph-node metastasis (4-15%) [6-15]. Atypical carcinoids are more aggressive (survival rate 61-88%) and show higher frequency of nodal metastasis [8-14, 16]. According to the WHO classification from 1999, LCNEC was assigned to the non-small cell lung cancers (NSCLC) but shows similar biological behavior as SCLC with a five-year survival rate of 15%-57% [4, 8]. Up to 20% of all lung cancer incidences are SCLC showing the poorest five-year survival rates with less than 5% [4, 5, 8, 15]. High-grade neuroendocrine carcinomas of the lung occur almost exclusively in older patients (median 61 years) with a history of smoking, whereas lung carcinoids occur frequently in never smokers and younger patients (mean 45-55 years) [7, 15, 17, 18].

Carcinoid tumors are predominantly treated surgically, metastatic tumors are commonly not sensitive to chemotherapeutic regimes or radiation [4, 19]. Adjuvant chemo- or radiotherapy should be considered in completely resected AC with mediastinal lymph node involvement [6, 20, 21]. Combinations of chemotherapeutics are usually platinum- or streptozoticin-based [20].

For SCLC, chemotherapy with cisplatin plus etoposide is a well-established treatment since these tumors are notably sensitive to chemo- and radiotherapy [4]. An optimal treatment for LCNEC is still under investigation due to the relative rarity of this entity [4]. As defined by the WHO classification guidelines, LCNEC belongs to NSCLC, leaving it to the physician whether to treat it similarly to SCLC or NSCLC [8]. In fact, patients receiving SCLC-based regimens showed a significantly better outcome [20, 22].

The present study was conducted to identify markers for personalized therapeutic concepts in pulmonary neuroendocrine tumors, potentially leading to an improved clinical management.

The study is based on a collective of seventy representative formalin-fixed, paraffin-embedded pulmonary neuroendocrine tumors (17 TC, 17 AC, 19 LCNEC, and 17 SCLC) used for sequencing. For expression analysis, 60 samples were investigated (16 TC and 13 AC, 16 LCNEC and 15 SCLC). The initial diagnosis was re-evaluated by two experienced pathologists (JWO, TMA). Specimens were taken from the Institute of Pathology at the University Hospital Essen (Germany) from 2005 till 2012. TNM-staging was based on the WHO Classification of Tumours guidelines (2004) [18]. The mean age at date of diagnosis was 58.6 years (median age: 59.0 years; 95% CI: 50.8-66.9 months). Survival data were available for 34 patients with twenty-two reported deaths at the time of data collection. Patients receiving chemotherapy before resection were excluded. The study was approved by the ethical committee of the University Hospital Essen (ID: 13-5382-BO). The investigations conform to the principles outlined in the declaration of Helsinki.

Probe-sets for each gene were designed and synthesized at NanoString Technologies (Seattle, USA). Total RNA (100 ng) from FFPE material was measured at the NanoString nCounter Core Facility at the University of Heidelberg, Germany.

FastQ-files were aligned against the Hg19 build. For analysis of the aligned reads including variant calling, the software Avadis NGS (Strand Scientific Intelligence, California, USA) was used. Reads with a quality score <30 were discarded. After removal of SNPs, data filtering was done by excluding variants with <25 effective variant reads or below 10% variation frequency. Synonymous variants were removed.

Finally, variants were analyzed for their functional impact on the protein-activity by using MutationAssessor (release 2) [23] and implementation of the ANNOVAR algorithm [24], combining the tools SIFT [25], PolyPhen2 [26] and MutationTaster [27].

All statistical analyses were performed using the R statistical programming environment (v3.1.3). For dichotomous factors and linear vectors the Wilcoxon Mann-Whitney rank sum test was applied. For variance analysis of variables with more than two categories the Kruskal-Wallis test was performed. Correlations between linear vectors were analyzed by Spearman's rank correlation test. Double dichotomous contingency tables were analyzed using Fisher's Exact test. To test dependency of ranked parameters with more than two groups the Pearson's Chi-squared test was used. COXPH-model was used to analyze overall survival (OS) and progression-free survival (PFS). PFS was calculated from the first day of chemotherapy until progression, death from any cause, or the last time of follow up. OS was defined as the time from diagnosis until the date of death or last follow-up. Surveillance of PFS and OS was stopped on August 31, 2014. Significant differences in PFS or OS were analyzed by the Wald-test, likelihood-ratio test and Score (logrank) test.

The level of statistical significance was defined as p≤0.05.

86 functionally deleterious variants were determined within 13 therapy-relevant genes in 49 out of 70 samples. Four of the variants could be detected in TC, 14 in AC, 30 in LCNEC and 38 in SCLC.

In seven samples (10%; one TC, two AC, one LCNEC and three SCLC), variants in the EGFR gene were found, but none of them is known or predicted to activate the receptor. For ERBB2, a receptor tyrosine kinase (RTK), closely related to EGFR, three different variants could be observed in eleven samples.

Overview of all genes covered by the NGS cancer hotspot panel. The Panel consists of two-times 221 probes for paired-end sequencing covering 221 mutational hotspots in 48 genes.

Results of the gene expression analysis. Minimum, maximum and median for all 13 therapy relevant markers in the overall cohort of pulmonary neuroendocrine tumours is shown. Additionally, the mean value of tumours expressing the mentioned markers as well as the percentage of tumours expressing these markers is shown for each entity. Besides, the number of cases showing an outstanding expression level, including minimum and maximum value, is listed. 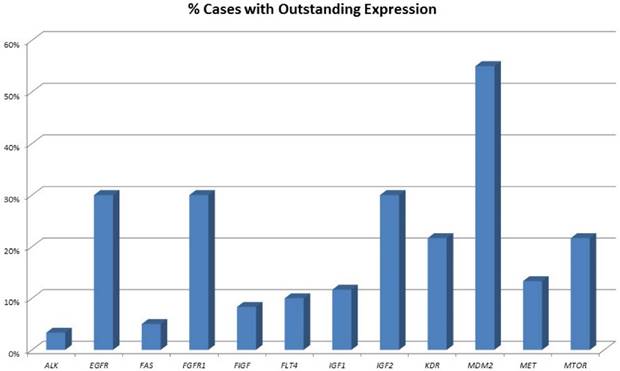 Interestingly, TP53 showed the highest frequency of variants with 31 alterations in 23 samples (33%), whereas the percentage was varying in the different neuroendocrine subtypes. 64.7% of all SCLC and 63.2% LCNEC showed a functional inactivation of P53 via TP53 mutations. No TP53 alterations were found in TC or in AC.

A summary of all mutations is given in Supplementary table 1.

Expression and mutation frequency are summarized in table 3 for each tumor entity.

Until now, studies investigating novel therapeutic approaches for pulmonary carcinoid tumors are lacking due to the rather long overall survival rates of patients with carcinoids. Nevertheless, tumors associated with a syndrome are resistant to chemo- and radiotherapy in most cases. This study is one of the first approaches to investigate a broad spectrum of biomarkers potentially predicting response to different chemotherapeutic agents. For mRNA expression analysis, the NanoString nCounter technology was used and additionally, 221 mutation hotspots were screened via massive parallel sequencing by synthesis.

Erlotinib, gefitinib or icotinib, in second generation also afatinib, are epidermal growth factor receptor tyrosine-kinase inhibitors (EGFR-TKI) used for the treatment of NSCLC harboring activating EGFR mutations [28]. Pathway activation downstream of EGFR, e.g. by KRAS mutations, is known to be a resistance mechanism for EGFR-TKI therapeutic approaches, but also the appearance of resistance mutations within the EGFR gene (e.g. p.T790M) has been described [29]. Moreover, continued activation of PI3K signaling via mutated PIK3CA was identified to abrogate gefitinib-induced apoptosis [29]. Further studies confirmed that the PI3K pathway is involved in different resistance mechanisms with respect to EGFR therapy approaches [30]. Consequently, different trials using PI-103, a PI3K/mTOR double inhibitor, in combination with EGFR-TKI therapy were initiated.

In our study, none of the tumors showed classical activating mutations in the EGFR gene. Of note, eight mutations impairing protein function were found in pulmonary neuroendocrine tumors regardless of the subtype (figure 2). A present study revealed that also cases with other non-classical mutations and complex mutational events had similar end-point outcomes to TKI therapy compared with classical activating mutations [31]. Besides, anti-EGFR antibody therapy with cetuximab may be a possible alternative. Cetuximab activity in NSCLC was found in tumors that expressed high levels of EGFR only [32], but also other monoclonal anti-EGFR antibodies were evaluated. These include matuzumab, panitumumab and most promising necitumumab, leading to an increased survival compared to cetuximab [33]. In our study, the majority of carcinoid tumors and more than half of all high-grade tumors show strongly upregulated expression levels of EGFR; one third of all NELC present with a highly increased EGFR gene expression level (figure 2). Furthermore, it has been reported that more than half of all carcinoids show increased EGFR copy numbers [34]. Thus, making them potential targets for monoclonal anti-EGFR antibodies. 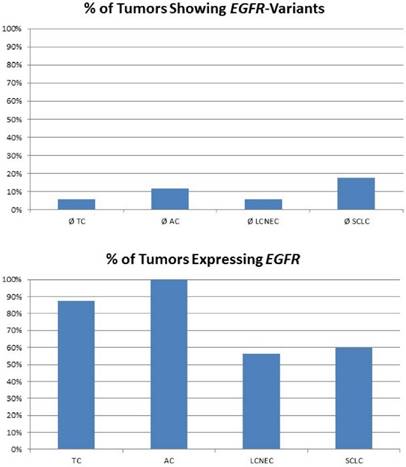 Lapatinib is currently approved for patients with ERBB2 (HER2)-positive metastatic breast cancer in combination with capecitabine after prior therapy with anthracycline, taxane, and trastuzumab [35, 36]. It is also approved in combination with letrozole in postmenopausal women with ERBB2-positive advanced breast cancer where endocrine therapy is indicated [36, 37]. Mutations in the ERBB2 (HER2) gene locus were reported in 1.5%-2% of all NSCLC, but this aberration occurred exclusively in adenocarcinomas [38, 39]. We found nine patients (13%) harboring the activating p.L785R and the p.R868W. It has been shown that patients with mutations and without amplification of the ERBB2 gene locus can respond to lapatinib [36, 39].

For high-grade neuroendocrine lung tumors, TP53 mutations were found in the majority of tumors (figure 3A). As described, the main alternative mechanism seems to be LOH, so MDM2 inhibition may not be successful. In contrast, carcinoids lack genetic alterations of TP53, but about 80% of samples show a dramatically high MDM2 gene expression level (figure 3B). Additionally, CDKN2A inhibiting MDM2 is absent in most pulmonary carcinoids. Therefore, pulmonary carcinoids seem to be an ideal target for Nutlin-3A therapy. A major issue with carcinoid tumors is the rarity of the disease and therefore it is difficult to conduct such studies. Also, there is an issue if drugs such as; everolimus could be administered as adjuvant therapy and for how long after surgery [52]. Everolimus could be used as treatment in the case that surgery is not possible, or could be used as adjuvant therapy in the case that surgery is not possible and only endoscopic debulking procedures are possible. The length of the therapy administration depends on multiple factors such as local disease progression and drug side effects. There are still many matters to clarify as disease diagnosis and management. [53-55] 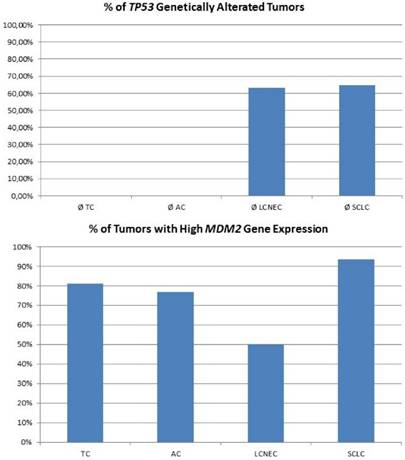 All authors disclose any affiliations that are considered to be relevant and important with any organization that to our knowledge has any direct interest in the subject matter discussed.

53. Wolin EM. Advances in the Diagnosis and Management of Well-Differentiated and Intermediate-Differentiated Neuroendocrine Tumors of the Lung. Chest. 2016 doi:10.1016/j.chest.2016.06.018