A Novel Prognostic Score, Based on Preoperative Nutritional Status, Predicts Outcomes of Patients after Curative Resection for Gastric Cancer

PURPOSE: We aimed to determine whether preoperative nutritional status (PNS) was a valuable predictor of outcome in patients with gastric cancer (GC).

METHODS: We retrospectively evaluated 1320 patients with GC undergoing curative resection. The PNS score was constructed based on four objective and easily measurable criteria: prognostic nutritional index (PNI) score 1, serum albumin <35 g/L, body mass index (BMI) <18.5 kg/m2, or preoperative weight loss ≥5% of body weight. The PNS score was 2 for patients who met three or four criteria, 1 for those who met one or two criteria, and 0 for those who didn't meet all of these criteria.

CONCLUSIONS: The PNS, a novel nutritional-based prognostic score, is independently associated with OS in GC. Prospective studies are needed to validate its clinical utility.

Gastric cancer (GC) is one of the most common malignancies worldwide, accounting for approximately one million new cases annually [1, 2]. Despite great advancements in early detection, surgical techniques, and multidisciplinary treatment in recent years, the postoperative long-term survival of patients is still poor [3]. Therefore, there is increasing interest in prognostic factors to accurately identify patients at high risk of recurrence and cancer death.

Cancer-associated malnutrition is common in the majority of patients with cancer, which affects their quality of life, response to anticancer treatment and survival [4, 5]. Over the past decades, the relationship between malnutrition and patient outcome has been well established in many cancers [6-9]. Several preoperative nutritional-based scores are designed in order to evaluate nutritional risk, postoperative complications and long-term prognosis, such as the Nutritional Risk Index, Mini Nutritional Assessment, and Geriatric assessment [10-12]. Despite recommendations, they fail to gain widespread consensus in GC. To seek a more practical and ideal method for classifying nutritional status, we used some objective and easily measurable criteria: prognostic nutritional index (PNI), serum albumin, body mass index (BMI), and preoperative weight loss. In fact, these scoring systems have been well validated as independent predictor of postoperative survival in GC. One meta-analysis of 14 studies suggested that PNI might be a valuable predictive indicator for the outcome of cancer, especially digestive system carcinomas [13]. Study of Lien et al revealed that serum albumin levels were independent factors correlated with prognosis in GC [14]. A recent study, including 1249 cases, shown that a low BMI was associated with poorer prognosis in stage III-IV GC patients [15]. Furthermore, our previous study reported that preoperative weight loss independently predicted overall survival (OS) in GC [16]. We postulated that, when combined, these four markers might better reflect the balance of nutritional status than when used alone.

In present study, we developed a new combination scoring system based on preoperative nutritional status (PNS). We aimed to validate the PNS score with a retrospective study and investigate its clinical utility in GC.

The inclusion criteria were as follow: (1) histologically confirmed stage I through III gastric adenocarcinoma, (2) no parenteral nutrition within one month before surgery, (3) no neoadjuvant chemotherapy or radiotherapy, and (4) entire set of clinicopathological and follow-up data.

All patients were routinely followed every 3 months in the first 2 years after surgery and every 6 months thereafter, including physical examination, laboratory testing, dynamic CT scan and upper gastrointestinal endoscopy. The latest follow-up was June, 2015 and the median follow-up duration was 35 months (range 1-160). OS was calculated from the date of surgery until death or the last available follow-up.

The association of the PNS score with various clinicopathological variables was analyzed using the chi-square test. Cumulative survival was estimated by the Kaplan-Meier method, and the statistical significance of differences was assessed by the log-rank test. The multivariate Cox proportional hazard model was applied for variables that proved to be significant (P < 0.05) in the univariate analysis. All clinicopathological variables were assessed for interaction and co-linearity. Statistical analyses were performed by SPSS 19.0 software (IBM Corporation, Armonk, NY, USA). Differences at P-values less than 0.05 were considered to be statistically significant. 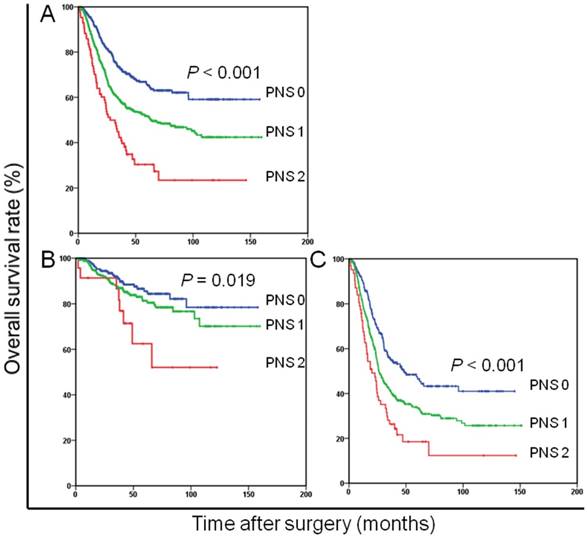 Correlation of PNS with clinicopathologic characteristics.

Overall survival based on PNS in subgroup analysis. 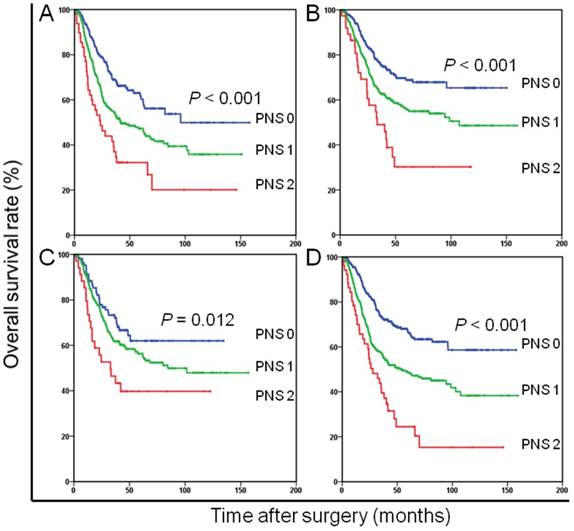 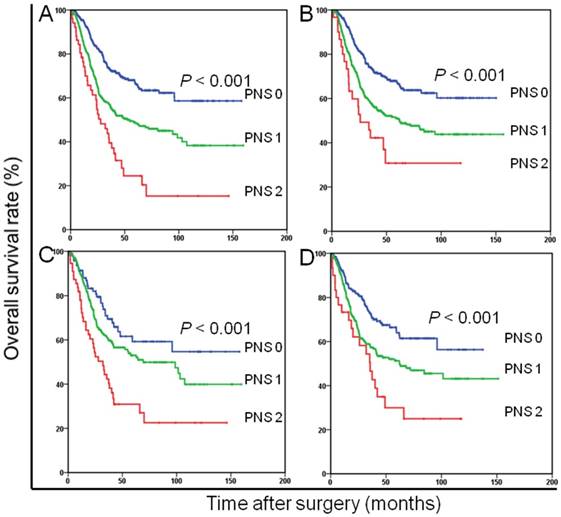 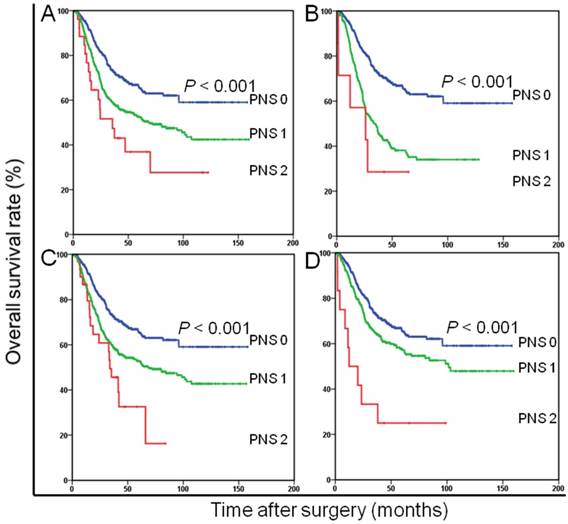 In present study, we found that the PNS score was independently associated with OS and this association held up in stage I-II and III GC. Furthermore, an elevated PNS was associated with some high-risk clinicopathological characteristics. These findings were supported by other studies, which also found an association between preoperative nutritional status and clinical outcome. Langius et al reported that weight loss both before and during radiotherapy were valuable prognostic indicators for 5-year disease-specific survival in head and neck cancer patients [29]. A recent study shown that preoperative PNI, as a barometer of nutritional status, maybe useful in predicting outcome for patients with GC at stages 1 and 2[30]. Yuko et al found that nutritional status, which was assessed by pretreatment BMI, might be a determinant of prognosis in older GC patients [31]. Given these results, we speculated that the PNS might exert more potent prognostic value than these established nutritional-based scores. Of note, the prognostic significance of PNS was still maintained in various subgroup analyses. Obviously, the PNS, a combination scoring system, identified more high-risk patients than individual nutritional-based score.

It should be noted that, of the PNS components, the PNI included serum albumin. When omitting any one variable from the present model, we found it significantly changed the

likelihood ratio and the hazard ratio of the model. Obviously, PNS that includes all four variables was a more comprehensive and superior predictor to identify nutritional risk in GC. In addition, it suggested serum albumin might be a promising prognostic factor in GC and play a key role as part of the PNS composite measure. In fact, our findings were in line with previous study which indicated that albumin alone seemed to be as strong of a predictor of all-cause mortality as the composite measure [34].

A potential limitation of the current study is that it was a retrospective single-centre analysis. However, one benefit of this arrangement was that surgical procedures, laboratory examination, and patient follow-up were consistent during the entire study period. Second, we lacked the data of progression-free survival, though OS was considered the gold standard end-point for cancer prognosis study. Third, there are no established criteria for systematic and structured nutritional evaluation. Therefore, our findings might need to be confirmed with additional outcome measures.

The PNS, a novel nutritional-based prognostic score, is a powerful prognostic indicator of outcome in patients with GC. It may be a promising tool in directing preoperative nutritional intervention for GC patients.

The authors wish to thank all of the people who helped with this study.

9. Nourissat A, Mille D, Delaroche G, Jacquin JP, Vergnon JM, Fournel P. et al. Estimation of the risk for nutritional state degradation in patients with cancer: development of a screening tool based on results from a cross-sectional survey. Ann Oncol. 2007;18:1882-6