Bladder cancer is one of the most common types of malignancies worldwide and frequently causes death in patients with advanced-stage cancer. Effective therapeutic targets for tumorigenesis and progression of bladder cancer are still poorly known [1, 2]. 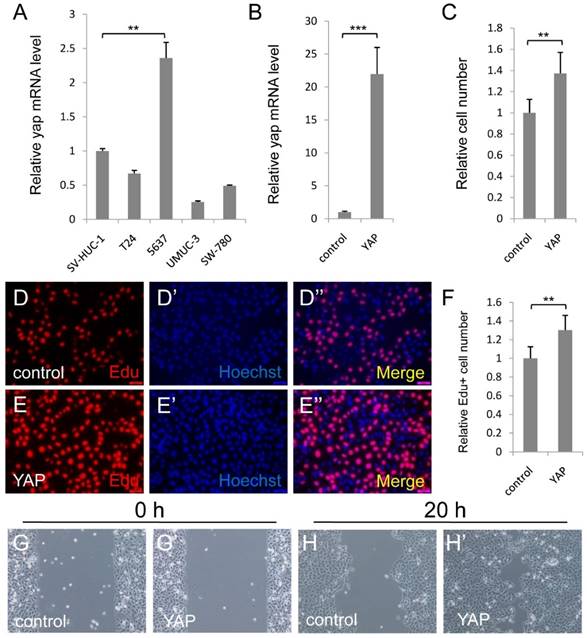 Mask2, the novel cofactor of YAP, has been identified recently. However, its function in tumorigenesis and development is still unknown. To dissect the function of Mask2 in bladder cancer, we firstly checked Mask2 expression level and discovered Mask2 expressed higher in 5637 cell than other bladder cancer cell lines (T24, UMUC-3 and SW-780) (Figure S1). Moreover, we knocked down Mask2 in 5637 cell and found depletion of Mask2 reduced the cell growth in the CCK-8 assay (Figure 2B) and the RNAi efficiency of shMask2 was checked by qPCR (Figure 2A). To confirm the cell growth effect, we performed the Edu staining assay to check the effect of Mask2 on 5637 cell proliferation. Consistent with previous data, Mask2 RNAi reduced the bladder cancer cell proliferation (Figure 2C-E). Moreover, knockdown of Mask2 reduced 5637 migrations by wound-healing assay (compared Figure 3G and 3G'' with 3F and 3F''). Collectively, these data indicated that depletion of Mask2 inhibits cell growth and migration in 5637 cell. 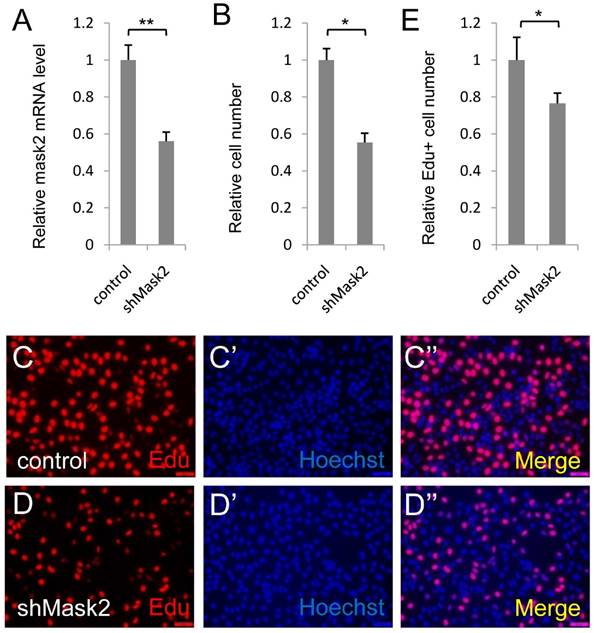 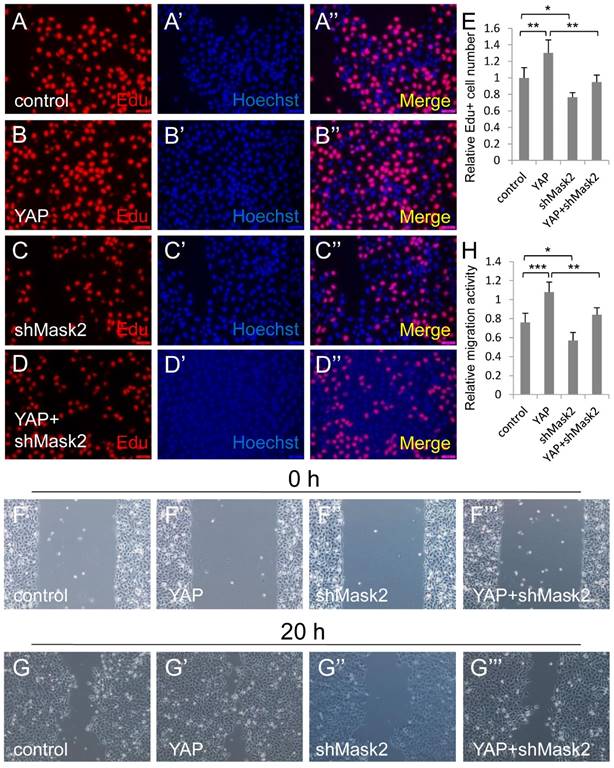 To gain insight into the relationship between Mask2 and YAP during bladder cancer tumorigenesis and development, we co-expressed YAP and shMask2 in 5637, via Edu staining assay, and find that depletion of Mask2 was able to obviously abolish YAP induced bladder cancer cell overgrowth (Figure 3A-3E). Similarly, knockdown of Mask2 was able to efficiently inhibit the 5637 cell migration caused by YAP overexpression (Figure 3F-3H). Taken all together, these results suggested that Mask2 is required for YAP induced bladder cancer cell growth and migration. This finding may provide evidence that Mask2 may be a potential therapy target for YAP highly expressed bladder cancer. 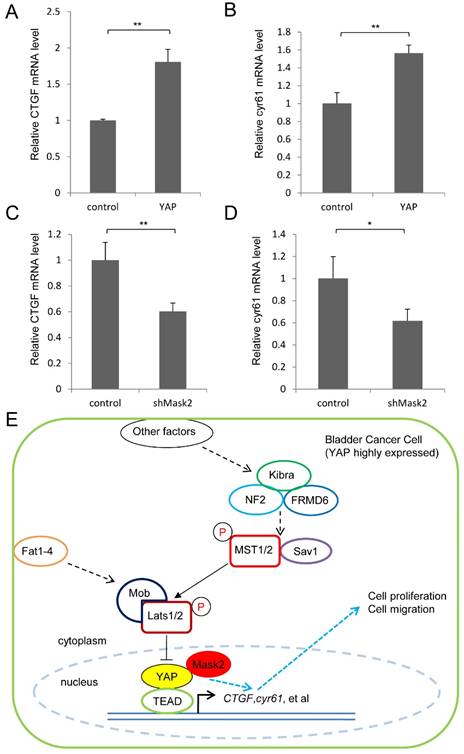 For all transfection experiments, cells were transfected with Lipofactamine 3000 (Invitrogen) following the manufacture's protocols.

Total RNAs from cells were isolated using the Trizol reagent (Invitrogen) following the manufacture's instruction. cDNA was synthesized by SuperScript III® (Invitrogene) kit. Quantitative real-time PCR (qPCR) was performed on the ABI PRISM 7000 Fluorescent Quantitative PCR system (Applied Biosystems) with SYBR Green Premix (Takara). All samples were normalized to gapdh and the relative mRNA levels were calculated by △△Ct method. The primers used (from 5' to 3' direction) were listed as following:

The effects of YAP/Mask2 complex on cell growth were determined by Cell Counting Kit-8 assay (Transgene, China). Briefly, 5×103 cells per well were seeded in a 96-well plate for 12 hours and then transfected as mentioned above. After 48 hours of transfection, 100μl fresh medium containing 10% of CCK-8 was replaced to each well and the cells were cultured for another 1 hour. The absorbance at 450 nm was determined using an ELISA microplate reader (Bio-Rad). Experiments were repeated for three times.

The effects of YAP and shMask2 on cell proliferation were determined by Ethynyl-2-deoxyuridine incorporation assay using Cell-Light™ EdU Apollo®567 In Vitro Imaging Kit (Ribobio, China). Briefly, after transfection for 48 hours, the Edu was added to each well with a final concentration of 50 μM. After 2 hours' culture, cells were fixed with 4% paraformaldehyde at room temperature. After 3 times washing in PBST (PBS with 0.1% Triton X-100), cells were incubated with 1 × Apollo solution for 30 min at room temperature (RT) in the dark. Finally, cells were subjected to nuclear staining with 1 × Hoechst for 30 min and then observed by fluorescence microscopy.

All experiments were performed in triplicate and data were shown as mean ± standard deviation (SD). Statistical analysis was conducted by Student's t-test or ANOVA using SPSS version 19.0 software. p < 0.05 was considered statistically significant.

18. Miles MC, Janket ML, Wheeler ED, Chattopadhyay A, Majumder B, Dericco J. et al. Molecular and functional characterization of a novel splice variant of ANKHD1 that lacks the KH domain and its role in cell survival and apoptosis. The FEBS journal. 2005;272:4091-102