The Impact of Diabetes on the Risk of Prostate Cancer Development according to Body Mass Index: A 10-year Nationwide Cohort Study

Purpose: We examined the association between obesity and prostate cancer both with and without diabetic patients included in the analysis using nationally representative data of the Korean population from the National Health Insurance System (NHIS).

Materials and Methods: Of the 424,712 participants who underwent health examinations in 2002-2008, 139,519 men ≥40 years old and without prostate cancer were followed from the beginning of 2002 to the end of 2012. Multivariate adjusted Cox regression analysis was conducted to examine the hazard ratio (HR) and 95% confidence interval (CI) for the association between prostate cancer and body mass index (BMI) both with and without diabetes.

Conclusion: This population-based study shows the evidence of association between obesity and development of prostate cancer, and the risk increases vary according to the change of BMI category and the existence of diabetes.

Prostate cancer is the second most commonly diagnosed malignancy worldwide. Though it is less common in Korea than in the Western Hemisphere, the incidence has sharply increased recently [1]. This trend is most likely explained by increased prevalence of obesity, resulting from lifestyle changes associated with westernization, such as physical inactivity and a greater intake of dietary fat and meat among Koreans. However, the biological mechanisms linking westernization and increased prostate cancer are still unclear. The only demonstrated risk factors to date that lead to prostate cancer are ethnicity, age, and family history of prostate cancer [2, 3].

Recently, multiple epidemiologic studies have suggested that obesity is associated with an increased risk for the development of prostate cancer [4, 5]. However, results of individual studies have been somewhat inconsistent, as some have suggested that the association between obesity and prostate cancer may differ by tumor aggressiveness [6-8], and others have reported a protective effect of obesity [9, 10].

We thought that these discrepancies might be due to poor representations of study populations and small sample sizes. So, we conducted a nationwide, population-based study to estimate the relationship between obesity and development of prostate cancer with 10 years of follow-up. It is also plausible that diabetes could be an important confounding factor in previous investigations, and there has been no retrospective, large, national cohort study involving population samples stratified on diabetes to our knowledge [11-14].

Therefore, in this study, we examined the association between obesity and prostate cancer in patients both with and without diabetes using nationally representative data of the Korean population.

In Korea, almost all citizens are enrolled in the National Health Insurance System (NHIS) as either an employee or a member of a community. The NHIS contains comprehensive health-related information for approximately 97.1% of the population in Korea and is composed of an eligibility database, a medical treatment database, a health examination database, and a medical care institution database. A customized database from NHIS includes 1,025,340 subjects that were selected by systematic sampling method to generate a representative sample from a total 46,605,433 Korean population in 2002. In the present study, sex, birth date, and diagnostic codes based on the International Classification of Diseases, Tenth Revision, Clinical Modification (ICD-10-CM) were retrieved. Diabetes was coded E10-14, and prostate cancer was coded C61. Because the Korean government has enhanced the benefit coverage for four major conditions (cancer, cardiovascular disease, cerebrovascular disease, and rare diseases), virtually all physician-diagnosed cancer patients are registered in the database. To protect the individual's privacy, each patient's identification number was anonymized.

Study design and disposition of subjects. 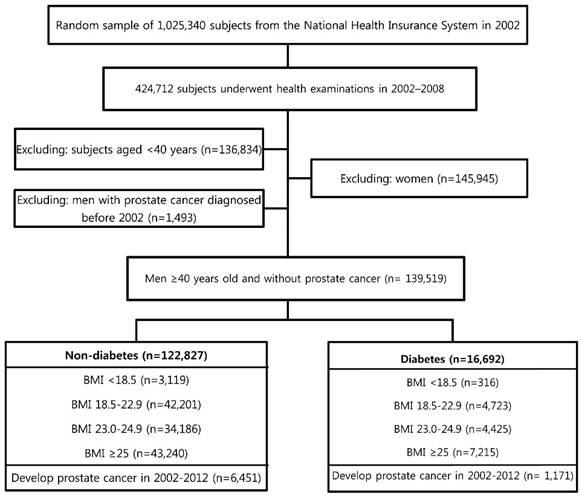 Of the 424,712 participants who underwent health examination at least one time from 2002-2008, those aged <40 years (n = 136,834) were excluded because prostate cancer is rare in young men. The information about diabetes and body mass index (BMI) was reported in this health examination. The Korean government has chosen the age of 65 years as the definition of elderly. Thus, we analyzed data for those aged ≥40 years stratified as follows: ages 40-64 and ≥65 years. After excluding women and those with prostate cancer diagnosed before 2002, 139,519 men ≥40 years old and without prostate cancer were followed from the beginning of 2002 to the end of 2012. The events did not occur during the time were censored and Cox regression analysis was used for these censored data. The percentage of missing values was approximately 15% for the variables. Sensitivity analysis was used to handle these missing data. Figure 1 shows a flowchart for selecting cases for the study. This study was approved by the Institutional Review Board of The Catholic University of Korea (No. KC15RISI0633). Anonymized and de-identified information was used for analysis, and therefore the need for informed consent was waived.

BMI was calculated as weight in kilograms divided by height in square meters. The Korean Society for the Study of Obesity recommends the use of the following BMI ranges: underweight (under 18.5); normal weight (18.5 to 22.9); overweight (23 to 24.9); and obese (over 25) [15]. Blood pressure was measured while the subject was in a seated position after five minutes of rest. Blood samples were collected after an overnight fasting and measured for serum levels of glucose, total cholesterol, triglycerides, high density lipoprotein cholesterol, and low density lipoprotein cholesterol.

The definition of socioeconomic and lifestyle variables was as follows. Smoking status was categorized into three groups: non-smokers, current smokers who had smoked 100 cigarettes or more in their lifetime, and ex-smokers - those who had smoked in the past but had since quit. Alcohol consumption status was categorized into three groups: non-drinker, those who drank two or three times a month, and those who drank weekly. Exercise status was also divided into three groups: non-exerciser, physical activity performed for at least 30 min less than four times a week, and more than five times a week. Household income was calculated as the family income, adjusting for the number of family members, and divided into Yes (below 5th quintile) and No.

SAS version 9.3 (SAS Institute, Cary, NC, USA) was used for statistical analysis. The data in this study are presented as the mean ± standard error (SE) or proportions for continuous or categorical variables, respectively. If necessary, a logarithmic transformation was performed to achieve a normal distribution. Multivariate adjusted Cox regression analysis was conducted to examine the hazard ratio (HR) and 95% confidence interval (CI) for the association between prostate cancer and BMI both with and without diabetes. Calculations were made adjusting for age, smoking status, alcohol consumption, exercise, income, and residential area. A p-value < 0.05 was considered statistically significant.

Comparison of clinical characteristics according to diagnosis of diabetes

Comparison of clinical characteristics according to the presence of diabetes.

The risk of prostate cancer increases with increasing BMI

Age- and multivariable-adjusted hazard ratios for prostate cancer according to history of diabetes and body mass index, 2002-2012.

1All rates are expressed as number per 1000 person-years.

The underlying biological mechanism contributing to the epidemiologic positive association between obesity and prostate cancer can be partly explained by adipokine signaling, the insulin/insulin-like growth factor (IGF)-1 axis, and sex hormones [13, 16], all of which were mentioned frequently in a study regarding the association between obesity and prostate cancer. Briefly, adipose tissue itself is an important organ for the production of adipokines and inflammatory cytokines, which potentially arouse tumorigenesis and growth. So large adipose tissue deposits may lead to an increase of adipokines, mediated through a release from accumulated fatty tissue. In tandem with the accumulation of adipose tissue, obesity is linked with low-grade chronic subclinical inflammation with infiltrating macrophages, which stimulate the production of cytokines and pro-inflammatory factors involved in the pathogenesis of insulin resistance [16]. These changes can make pancreatic beta cells increase the production of insulin to maintain normal glucose levels, leading to hyperinsulinemia. Hyperinsulinemia has been shown to induce tumorigenesis in prostate cancer xenograft models [17, 18]. Obesity and hyperinsulinemia promote increased circulating IGF-1, a recognized pathogenic role player in many cancers [13].

The cause of the differences in the association between prostate cancer and BMI in diabetic and non-diabetic men is not entirely clear, but might be partially explained by insulin secretion change related to differences in BMI.

The distinctive feature of our study is that, to the best of our knowledge, it is the first population-based observational study on the relation between obesity and development of prostate cancer, stratified by the existence of diabetes. The findings of previous studies varied and showed conflicting results, with some finding obesity is a risk factor [27, 28], another reporting no association [29], and others showing an inverse relation between obesity and the development of prostate cancer [10, 30]. Because the diabetic population often has varying levels of circulating insulin, disease presence could be a possible confounding factor in analysis according hormone levels. This study showed a link between prostate cancer and BMI, with the positive relation varied according to the change of BMI category and the existence of diabetes.

The other distinctive feature of this study is that it was conducted on a region in which prostate specific antigen (PSA) screening is common and widespread. In South Korea, the cost of PSA is very low and covered by the national insurance service. Many people receive an annual medical checkup, which includes routine PSA screening. To explain conflicting results, the geographic differences related to PSA screening rates are suggested [31]. In a study conducted in Europe, where PSA screening is not as common as in the USA, there was a significant positive association between obesity and prostate cancer, whereas North American studies showed no association between obesity and prostate cancer. The different findings in the region where PSA screening is common and widespread are worthy of notice, because potential modifying factors of PSA screening are regulated.

One limitation of this study was that it did not include detailed biochemical information about the cancer stage and grade, and thus we could not evaluate the impact of those factors. The PSA level, digital rectal examination finding, family history, and medication history also were not included in this study. However, use of special medications such as statins and metformin were adjusted by disease diagnostic code such as E10 (diabetes) and E785 (dyslipidemia) instead. And the point that this study conducted in the region where PSA screening has been widespread could make up this limitation partially. Additionally, in Korea, the prostate cancer incidence has increased in the early 2000s. So the impact of family history was difficult to examine practically.

Another limitation was not differentiating between type I and type II diabetes. As mentioned above, diabetes type can have an influence on the level of circulating insulin. However, type II diabetes accounts for the majority of patients, and the proportion increases with age. Thus, this limitation would likely not influence our study outcomes.

The authors wish to acknowledge the financial support of the Catholic Medical Center Research Foundation made in the program year of 2016.

12. Inzucchi SE, Matthews DR. Response to Comments on Inzucchi et al. Management of Hyperglycemia in Type 2 Diabetes, 2015: A Patient-Centered Approach. Update to a Position Statement of the American Diabetes Association and the European Association for the Study of Diabetes. Diabetes Care 2015;38:140-149. Diabetes Care. 2015;38:e128-9

21. Bonkhoff H, Berges R. The evolving role of oestrogens and their receptors in the development and progression of prostate cancer. Eur Urol. 2009;55:533-42