B-cell activation factor of the TNF family (BAFF), and a proliferation-inducing ligand (APRIL), two members of the tumour necrosis factor (TNF) superfamily, beyond playing a significant role in normal B-cell development, promote survival and proliferation of malignant B cells. Both ligands interact with 3 receptors: BAFF-R, specific to BAFF, and TACI and BCMA which are shared by both BAFF and APRIL. Here we wished to investigate the potential role of these proteins in resistance of acute myeloid leukaemia (AML) blasts to apoptosis. We found that the levels of both mRNA and proteins of APRIL, BAFF and their receptors were expressed in leukaemic cells of 24 newly diagnosed, untreated AML patients. We also demonstrated that patients who did not further respond to induction therapy (NR) presented with significantly higher baseline APRIL and BAFF expression on AML blasts as compared to these subjects who, after induction, achieved complete remission (CR) following induction therapy. Moreover, we observed striking differences in baseline levels of BCMA between CR and NR patients as we did not find detectable expression of this receptor in the latter group of patients. Interestingly, we found that AML blasts collected at baseline from NR patients cultured in presence of exogenous BAFF and APRIL were significantly more resistant to spontaneous or drug-induced apoptosis as compared with cells derived from CR patients. Altogether, our data confirm that BAFF and APRIL signaling play important role in AML pathogenesis and susceptibility to cytotoxic therapy while measuring of BCMA expression on AML cells can become a novel prognostic factor for chemotherapy response.

Despite numerous efforts, the search for identification of crucial ligands and receptors being involved in either promotion or inhibition of cell growth, progression and susceptibility to cytotoxic drugs of acute myeloid leukemia (AML) cells is still warranted. Recently, TNF receptor family-related ligands were linked to pathogenesis of hematological malignancies, including AML (1, 2). Two of these members, namely BAFF (B cell Activating Factor of the TNF Family) and APRIL (a Proliferation-Inducing Ligand), were shown recently to play crucial role in the development of autoreactive B cells and regulation of cell survival, growth and death (3, 4). Interestingly, APRIL and BAFF share two members of TNF superfamily receptors, namely B-cell maturation antigen (BCMA) and transmembrane activator and calcium-modulating cyclophilin ligand interactor (TACI), while B-cell activating factor receptor (BAFF-R) appears to be the primary receptor for BAFF only (1).

To date, the anti-apoptotic activity of APRIL and BAFF was demonstrated in B-lymphoma, multiple myeloma (MM) and chronic lymphocytic leukemia (B-CLL) (5-7). However, there were only limited studies on the role of APRIL and BAFF in regulating apoptotic processes in AML. Therefore, in the present study we aimed to determine whether baseline quantification of peripheral blood CD33+ blast cells expressing BAFF, APRIL and their receptors in newly diagnosed AML patients could improve prognosis of treatment response. Additionally, we aimed to analyze whether APRIL and/or BAFF signaling could be involved in regulating leukemic cell sensitivity to chemotherapeutic drugs.

Peripheral blood from 24 patients with newly diagnosed AML (diagnoses were established following the WHO classification system) was provided by the Department of Hematology, Medical University of Bialystok. The samples were collected upon obtaining a written informed consent pursuant to the rules and tenets of the recently revised Helsinki protocol. Patient's median age at the time of sample collection was 55 years and the range was 21-65. Twelve subjects were female and twelve male. Blood counts and flow cytometry were performed in order to confirm the presence of blastic cells, whereas cytogenetic and molecular studies, including FISH (AML1/ETO, CBFß/ MYH11, MLLT3-MLL and frequently mutated genes FLT3-ITD, NPM1, CEBPA) were conducted with a view to determining the risk group, following the WHO recommendation. On this basis, it was established that all the patients involved in the study had a normal karyotype (46XX/46XY) and none of them suffered from mutated core binding factor leukaemia (CEBPAmut), mutated nucleophosmin (NPM1mut) or internal tandem duplication of Fms-like tyrosine kinase 3 (FLT3-ITD). AML patients were treated with seven-day induction chemotherapy regimens corresponding to the standard therapy based on the Polish Adult Leukaemia Group: (DAC schedule) (8). After induction, the morphology response was evaluated; twelve patients achieved complete remission (CR) after 1st induction and 12 were non-responders (NR). The detailed characteristic of AML patients and treatment is listed in Table 1.

Statistical analysis was carried out using GraphPad Prism 5 Software. Unpaired Student t test or Wilcoxon matched pair test was used. The Spearman's rank correlation coefficient was used to examine correlations. Statistically significant results were identified by a p <0.05 for all assays performed. The data are presented as mean ± SEM.

Characteristics of patients with AML

AML cells isolated from peripheral blood were used for staining and determination of APRIL, BAFF and their receptor expression. First, we found significant differences (Fig.1A) in frequencies of CD33+ blasts expressing APRIL, BAFF, but not their mean fluorescence intensity (MFI), among groups of patients with varying clinical responses to applied chemotherapy. Non-responders (NR) showed elevated baseline frequencies of APRIL- and BAFF-expressing CD33+ blasts as compared to patients who achieved complete remission (CR) (15.76%±2.48 vs 34.16%±6.53, p=0.0343 and 40.87%±6.3 vs 77.41%±5.34, p=0.0021, respectively). Surprisingly, however, there was no difference in plasma levels of APRIL and BAFF between CR and NR patients (data not shown). With regard to APRIL and BAFF receptors, the most striking differences were observed in frequencies of CD33+BCMA+ AML cells. Interestingly, we demonstrated here that the AML patients who did not respond to induction chemotherapy presented barely detectable frequencies (below 1%) of CD33+BCMA+ cells. In contrast, in CR patients we found substantially elevated but still small frequencies of those cells (15.57%±8.64). On the other hand, we found no differences in the frequencies of AML blasts expressing TACI (p=0.4555) and BAFF-R (p=0.3196). Moreover, we found that patients who further developed CR to induction chemotherapy presented with significantly elevated MFI of BAFF-R and TACI, but not BCMA on AML cells when compared NR (107.4±28.57 vs 21,84±7.78, p=0.004; 132.5±32.9 vs 30.76±13.67, p=0.0062; 17.66±8.45 vs 3.29±0.50 p=0.1213, respectively) (Fig 1B).

We next set out to confirm these findings by qPCR analysis of APRIL, BAFF, BCMA, BAFF-R and TACI expression levels (Fig.1C). Surprisingly, we found no differences in BAFF, BAFF-R and TACI expression level in CD33+ AML cells (p>0.05). In some contrast, we observed a tendency (at a threshold of statistical significance) towards higher expression of APRIL in NR when compared to CR patients (3.284±1.77 vs 0.5547±0.17, p=0.0745). Importantly, CR patients showed higher BCMA expression when compared to NR (8.16±5.20 vs 0.12±0.03, p=0.0127 respectively). Next we confirmed membrane BCMA expression on CD33+ AML blasts by immunofluorescence staining (Fig.1D). Again, we demonstrated here that at baseline BCMA expression on AML cells could have been detected only in CR, but not NR patients. Moreover, we correlated APRIL and BAFF expression and BCMA in AML cells. Interestingly, we observed significant negative correlation between the expression of BAFF, but not APRIL, and BCMA in AML cells (r=-0.85, p=0.00006 and r=0.02, p=0.93, respectively).

Next, we intended to analyze DNA methylation status of promoter sequences of BCMA gene. Although we did not observe any differences in methylation levels with regard to the type of clinical response to the therapy (data not shown), we found significant negative correlation between the level of methylation of BCMA promoter and the frequencies of CD33+BCMA+ cell (p=0.0204, r=0.5564).

Finally, in order to directly evaluate the pro-survival effect of APRIL and BAFF on CD33+ cells, we treated the blasts with cytosine arabinoside (AraC), a widely used DNA-damaging drug, either in the presence or absence of recombinant human APRIL and BAFF. As expected, AraC significantly decreased frequencies of live CD33+ AML blasts (Fig.2A). Notably, stimulation with APRIL significantly reduced AraC-related induction of cell death (Fig.2B) in NR but not in CR patients. Additionally, we observed a trend (at a threshold of statistical significance) to increase frequencies of viable cells after BAFF stimulation in presence of AraC (Fig.2C). 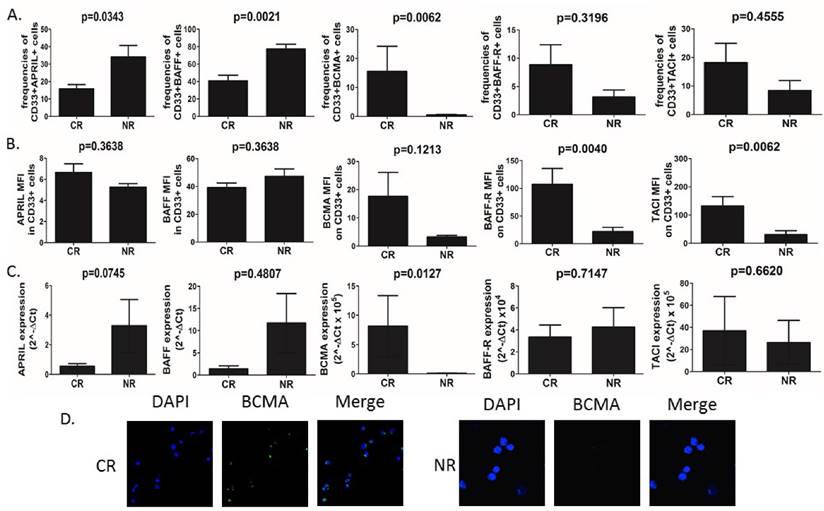 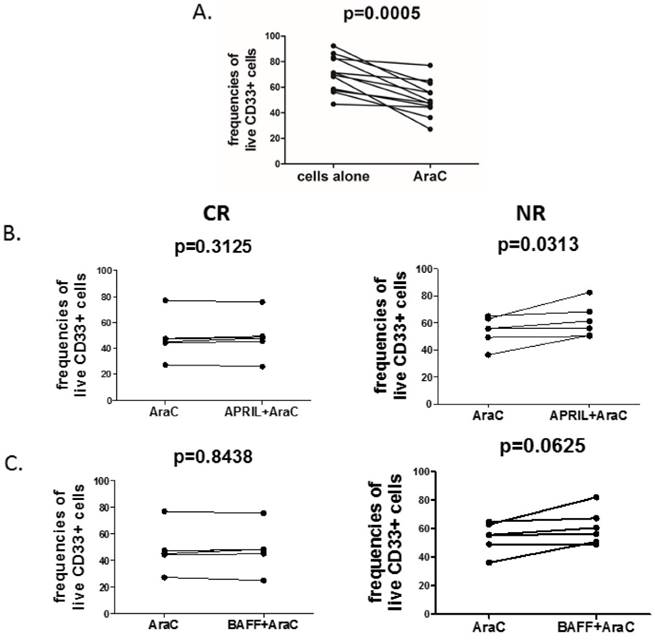 Our results confirmed the previous observations suggesting a possible involvement of BCMA in regulating apoptosis of AML cells and its usefulness as a potential marker that predict treatment response to induction chemotherapy. It should be noted that, BCMA is now believed to enhance survival of B cells, especially at later stages of their differentiation (9). On the other hand, early studies revealed that BCMA knockout mice did not present with any specific phenotype (10). Subsequent experiments, however, proved that BCMA deficiency led to impaired survival of long-lived bone marrow plasma cells (11). Moreover, a soluble form of BCMA, which inhibited the proliferative activity of APRIL in vitro, decreases tumor cell proliferation in nude mice. Additionally, in xenograft models of lung and colon cancer, intratumoral delivery of soluble BCMA was capable of significantly reducing tumor growth in mice, which had been treated with the soluble receptor (11). It is likely, therefore, that BCMA activation cause increased proliferation of AML cells what in turn may be associated with their increased sensitivity to chemotherapeutic drug, including commonly used AraC. On the other hand, soluble BCMA released from BCMA cells may reduce the anti-apoptotic APRIL and BAFF activity (12). This hypothesis, however, did not explain why only a small subset of AML cells show BCMA expression.

To date, several studies indicated that aberrant DNA methylation could also play important role in the progression of numerous human neoplasms, including AML (13). Therefore, we analyzed here DNA methylation status of promoter sequences of BCMA gene. Interestingly, we found, significant negative correlation between the level of methylation of BCMA promoter and the frequencies of CD33+BCMA+ cell, suggesting possible contribution of methylation of BCMA to the resistance of AML cells to the therapy. Additionally, we did not observe any significant relationship between BCMA methylation status and clinical features that may influence on analyzed gene methylation, namely: age, smoking (data not shown). On the other hand, observed negative correlation between BCMA and BAFF expression, suggests regulatory function of the latter. However, the mechanisms of interactions need to be further investigated.

Interestingly, we indicated that APRIL shows protective effect on AML cells and reduces AraC-related induction of cell death. Similarly, Bonci and colleagues showed that neutralization of APRIL circuit resulted in marked induction of cell death in all AML samples, suggesting that APRIL can act as a survival factor for AML cells. Authors demonstrated also that the exogenous expression of APRIL resulted in up-regulation of Bcl-2 in CD34+ cells (2). In contrast, APRIL neutralization resulted in down-regulation of Bcl-2 in primary AML cells (2). Indeed, the intensity of Bcl-2 expression was found to correlate with CR rate, where a higher MFI was associated with a low CR rate after standard intensive chemotherapy (14), indicating that APRIL may protect AML from chemotherapeutic drugs through up-regulation of Bcl-2.

In conclusion, we showed here clearly that APRIL and BAFF are important players involved in regulation of apoptosis in CD33+ AML blasts. More importantly, the lack of BCMA expression on AML cells may be useful in prediction of treatment response of myeloid leukemia. However, the exact function of BCMA and regulation of its expression in AML blasts is still unknown and thus requires further investigation.

MM, AE, PS and UR are supported by KNOW (Leading National Research Center)