G protein-coupled receptor kinase interacting protein 1 (GIT1) was originally identified as an ADP ribosylation factor GTPase-activating protein (ARF-GAP) that binds to G-protein-coupled receptor kinases (GRKs) and regulates membrane trafficking [5]. Recently, GIT1 was shown to play a critical role in regulating focal adhesion, cell migration and lamellipodia formation [6]. Structural analysis of GIT1 consists of multiple domains, including coiled-coil, Spa homology, focal adhesion targeting (FAT) domain of focal adhesion kinase (FAK), FAT-Homology (FAH), paxillin and Hic-5 LD3-binding domains [7-8]. These structural properties of GIT1 contribute to tumor metastasis, including cell migration, invasion, focal adhesion and angiogenesis [9-11]. microRNAs (miRNAs), a large class of small noncoding RNAs with approximately 22 nucleotides in length, have emerged as new important mediators of cancer development and treatment [12]. They have been shown to regulate specific oncogenes, and participate in the processes of tumor growth and cancer metastasis. Also, miRNAs were promised to be key targets in the diagnosis, prognosis and therapy of cancers [13-14]. In the present study, miR-34c was screened out by microarray from mouse with breast cancer metastasis and presented a powerful role in regulating GIT1 expression, which mediated the suppression of cells migration and invasion in breast cancer cells.

siRNA technology was preformed to silence the expression of GIT1 in MCF-7 and MDA-MB-231 cells. si-GIT1 (Santa Cruz Biotechnology, Dallas, Texas, USA) at the concentration of 100 nM or the negative control siRNA (si-Control) were delivered by LipofectamineTM RNAiMAX in 6-well plates cells, and then was further incubated for 48 hours at 37 °C in an incubator. All the transfections were repeated more than three times independently.

Total RNA was extracted from tumor tissue and cell line using TRIzol reagents according to the manufacturer's instructions. cDNA was assessed with SYBR Green PCR Master Mix (TOYOBO) by ABI PRISM® 7500 Sequence Detection System (Applied Biosystems). The U6 and 18S were used as internal standards for miRNA and mRNA respectively. The primer pairs are listed in Table 1. We determined the appropriate cycle threshold (Ct) using the automatic baseline determination feature and analyzed data by relative quantitative analysis method. The mean Ct values (± SEM) of three independent experiments are presented.

Primers for qRT-PCR and luciferase assay.

Note: miRNA Reverse primer as a common reverse primer used for all miRNAs detected by qRT-PCR in our study. XhoI and NotI are name of restriction enzyme.

We synthesized fragments of GIT1 3'UTR containing the exact target site for miR-34c or the mutated target site using the Taq PCR amplification. The primer pairs are listed in Table 1. We insert the GIT1 3'UTR fragments into the multiple cloning sites (SgfI and XhoI) of the psiCHECKTM-2 luciferase miRNA expression reporter vector (Promega, Madison, WI, USA). The HEK293T cells (2×104 pre well) were transfected with miR-34c (50 nM) or AMO-miR-34c (50 nM) and 0.5 μg plasmid by Lipofectamine™ RNAiMAX, according to the manufacturer's instructions. Luciferase activities were measured 48 hours after transfection with a Dual-Luciferase Reporter Assay System (Promega, Madison, WI, USA) on a luminometer (GloMax, Promega).

Student's t-test was used to compare the difference between two groups. Statistical comparisons among multiple groups were performed by Tukey's post hoc test and One-Way ANOVA. All data are presented as Mean ± SEM. All of the figures were plotted using GraphPad Prism (GraphPad Software Inc., San Diego, USA). P<0.05 was considered as significantly different. 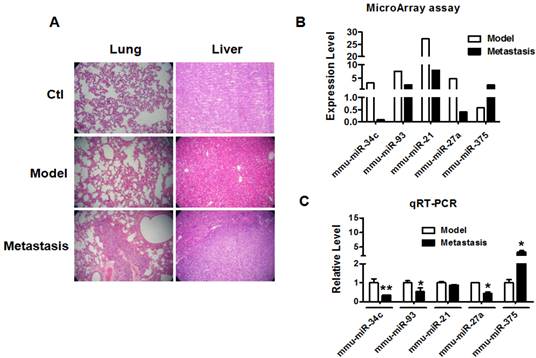 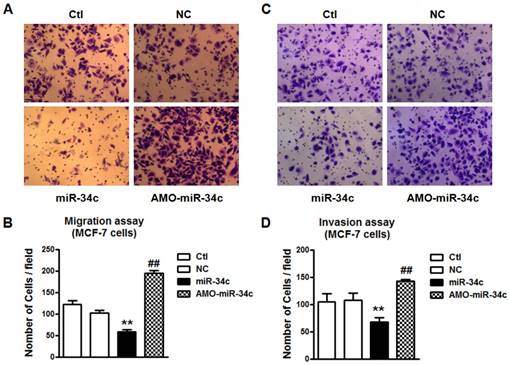 We further explored the mechanism underlying the function of miR-34c in suppressing migration and invasion of MCF-7 cells. Computational prediction using TargetScan and miRnada predicted GIT1 gene which encodes GIT1 protein in tumor cells, as a potential target of miR-34c (Figure 3A). Then, we employed qRT-PCR and western blot to determine GIT1 mRNA and protein expression in tumor tissues from model group and metastasis group. As shown in Figure 3B and 3C, the protein level of GIT1 was upregulated significantly, but mRNA level did not change significantly in tumor tissue of metastasis group compared with that in model group. Furthermore, we performed the luciferase assay to determine whether miR-34c targets at GIT1 via binding to GIT1 mRNA 3'UTR. After verified that miR-34c was successfully transfected into HEK293T cells by qRT-PCR (Figure 3D), luciferase assay was carried out. Overexpression miR-34c (50 nM) induced a substantial reduction of luciferase activity of constructs carrying fragment of WT GIT1 3'UTR to 43% (P<0.01) compared with NC group, and this effect was reversed by AMO-miR-34c transfection (Figure 3E). Moreover, transfection of miR-34c or AMO-miR-34c did not affect the luciferase reporter activity with binding site mutation in GIT1 mRNA 3'UTR.

To further test that miR-34c regulates GIT1 expression in MCF-7 cells, we transfected miR-34c mimics and its inhibitor AMO-miR-34c in MCF-7 cells for 48 hr. Firstly; we identify the efficiency of microRNA transfection in MCF-7 cells. As shown in Figure 4A, miR-34c was effectively overexpressed, and AMO-miR-34c successfully suppressed endogenous miR-34c in MCF-7 cells. Then, immunocytochemistry assay showed that GIT1 protein expression was significantly reduced in cytoplasm of MCF-7 cells after transfected with miR-34c. Previous study has reported that inhibition of GIT1 resulted in protein degradation and reduction of paxillin in cancers [16]. In this study, we also found that Paxillin was downregulated in MCF-7 cells with miR-34c overexpression. Inversely, AMO-miR-34c transfection induced the increase of GIT1 and Paxillin protein expression (Figure 4B). Consistent with immunocytochemistry assay results, the protein level of GIT1 expression was decreased significantly in MCF-7 cells after treatment with miR-34c mimics, and these changes were reversed by treatment with AMO-miR-34c. Similar results were obtained in Paxillin protein expression (Figure 4C and D). These results demonstrated miR-34c targeting at GIT1, and also affected expression of Paxillin, GIT1 related gene, in breast cancer cells, which indicated miR-34c potentially participates in the process of tumor metastasis. 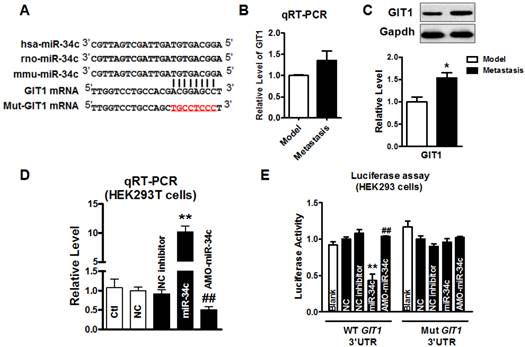 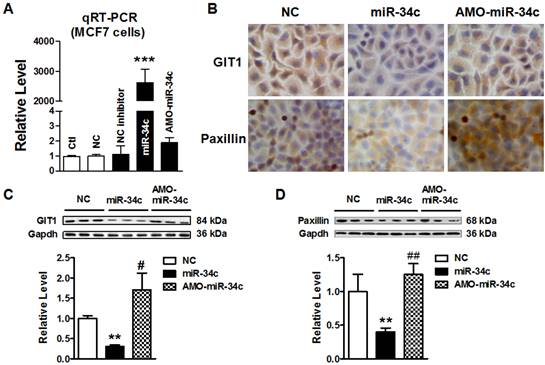 To assess the role of GIT1 in cancer metastasis, we knockdowned endogenous GIT1 expression by small interfering RNAs (siRNAs) transfection in MCF-7 cells. After transfected with si-GIT1 in MCF-7 cells for 48 hours, the mRNA level of GIT1 was significantly suppressed (Figure 5A) and the protein levels of both GIT1 and Paxillin expression were significantly decreased by immunocytochemistry and western blot as well (Figure 5B and C). It suggested that siRNA si-GIT1 effectively suppressed endogenous GIT1 protein expression. Consistently, si-GIT1 also inhibited cell migration and invasion significantly in MCF-7 cells (Figure 6). Thus, knockdown of GIT1 suppressed cell migration and invasion of MCF-7 breast cancer cells. 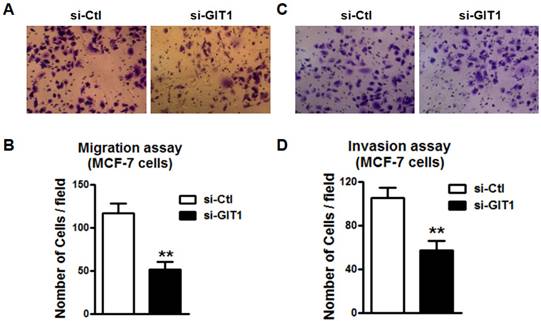 Due to the high morbidity and mortality following breast cancer metastasis, it is urgently needed to look for new molecules for the early diagnosis and treatment of breast cancer metastasis. A large body of evidence has revealed that miRNAs act as oncogenes or tumor suppressor in process of tumor development and progression, by affecting tumor cell proliferation, apoptosis, migration and invasion [17-18]. Therefore, miRNAs potentially function as new promising targets for cancer diagnosis and therapeutics [19]. It has been shown that miRNAs are frequently associated with chromosomal instability and amplification in multiple human cancers [17]. Nowadays, many miRNAs have been found correlated with breast cancer. It was reported by Wang et al. that miR-320a inhibits the proliferation and invasion of breast cancer by targeting RAB11A [18]. Li et al. reported that miR-762 promotes the proliferation and invasion of breast cancer MCF-7 cells by targeting IRF7 expression [20]. However, whether miRNAs takes part in the development of breast cancer has not been reported yet. 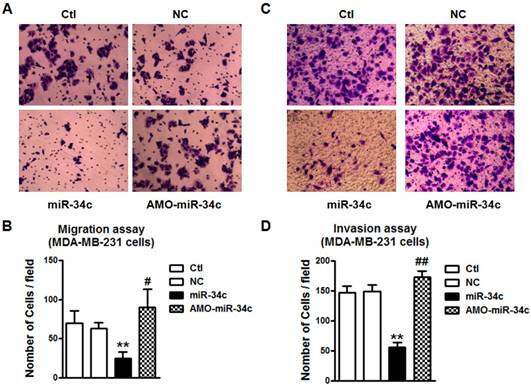 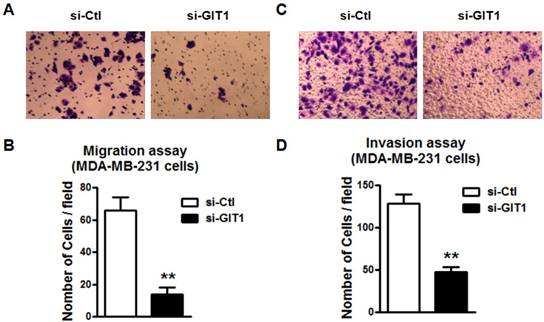 In the in vivo study, we found that miR-34c, miR-93, miR-21 and miR-27a were significantly decreased in metastatic breast tumors. Furthermore, qRT-PCR was verified that miR-34c is the most significantly decreased compared with other miRNAs. Actually, previous studies have reported that miR-34c was downregulated in the tissues of non-small cell lung cancer, nasopharyngeal carcinoma, and prostate cancer cells [21-23]. It indicated that miR-34c might participate in metastasis of breast cancer. To further verify the function of miR-34c in this process, we forced expression miR-34c in MCF-7 and MDA-MB-231 cells in in vitro study and found that migration and invasion of breast cancer cells were significantly inhibited by transfection with miR-34c. Conversely, silencing of miR-34c by AMO-miR-34c promoted the migration and invasion of both MCF-7 and MDA-MB-231 cells. This result is in consistent with the previous findings on the antitumor effects of miR-34c [24].

Then, we further explored the molecular mechanisms of miR-34c in breast cancer metastasis. It has been widely reported that GIT1 was associated with tumor cell migration, invasion as well as angiogenesis [10, 16, 25]. As a key factor of tumor metastasis, GIT1 protein level was significantly increased while its mRNA level was only elevated slightly in metastasis mouse model, which suggested that the expression of GIT1 is posttranscriptionally regulated in the process of breast cancer metastasis. By using two microRNA database software (TargetScan, miRnada), we found that miR-34c was conserved in multiple species (Human, mouse and rat), and predicted that GIT1 is one of the targets of miR-34c. The result of luciferase assay proved that miR-34c targeted GIT1 mRNA 3'UTR and negatively regulated GIT1 protein expression. Paxillin is a signal transduction adaptor protein, and functions to adhering cells to the extracellular matrix. The N-terminal region of paxillin is rich in protein-protein interaction sites. The protein that may bind to paxillin includes focal adhesion kinase (FAK)-Src complex [26], and GIT1/βPIX/pTyr-PAK1 complex, which regulate breast cancer cell motility and invasion [8, 27]. Here we found that overexpression miR-34c induced GIT1 downregulation, accompanied by Paxillin downregulation in MCF-7 cells, which indicated miR-34c potentially participated in the migration and invasion of breast cancer cell through GIT1/Paxillin pathway. It was shown that GIT1 can interact with paxillin, which increased instability of paxillin and prevented it from protein degradation in cells [16]. In this study, we found that knockdown of GIT1 by siRNA induced the downregulation of both GIT1 protein and Paxillin protein, which restored cell migration as well as invasion in breast cancer cells. It strongly supported that GIT1/Paxillin is responsible for the migration and invasion of breast cancer cells, which is partially consistent with current reports [16].

The authors declare that no competing interests exist.