Rho GTPases play a pivotal role in tumor progression by regulating tumor cell migration and invasion. However, the role of Rho GTPases in gastric cancer (GC) remains unexplored. This study aimed to investigate the clinical implications of RhoJ, which is an uncharted member of Rho family. RhoJ expression in human GC cell lines and surgical specimens from GC patients were analyzed. Moreover, in vitro gain-of-function analysis was performed to evaluate the malignant phenotypes of RhoJ-overexpressing GC cells. The extent of RhoJ expression varied among GC cell lines and GC patients. YCC-9 cell line displayed the strongest expression, while YCC-10, -11, and -16 showed scant expressions. Of the 70 GC patients, 34 (48.6%) had RhoJ expression in their GC tissue, and patients with high RhoJ expression had more diffuse type GC (73.5% vs. 41.7%), were at more advanced stages (stage III, IV: 85.3% vs. 58.4%), and had more frequent metastasis (47.1% vs. 11.1%), denoting that RhoJ has a potential role in GC progression and metastasis. High RhoJ expression significantly correlated with poor overall survival and recurrence-free survival after surgical resection of gastric cancer. Finally, In vitro gain-of-function experiments showed 41.3% enhanced motility and 60.4% enhanced invasiveness in RhoJ-overexpressing GC cells compared to control, with negligible difference in cell proliferation. Collectively, high RhoJ expression is an independent negative prognostic factor for the survival outcome of GC and correlated with the increased cell motility and invasiveness.

Gastric cancer (GC) is one of the most prevalent malignancies worldwide [1]. Despite recent therapeutic advances, the overall prognosis of recurrent or metastatic GC remains dismal, thereby necessitating the unearthing of novel therapeutic targets in GC [2-4].

The invasive and migratory capability of malignant tumor cells into neighboring microenvironment is the most critical step that governs the entire process of tumor progression [5, 6]. Among the prime mediators which are responsible for tumor cell migration and invasion, one particular family of proteins that seems to play a decisive role is Rho GTPase [7-9]. They are molecular switches which regulate various intracellular processes such as cytoskeletal rearrangement, thereby playing important roles in every aspects of tumor progression including malignant transformation, proliferation, invasion, and metastasis of tumor cells [8-10]. Among more than 20 members of Rho family, RhoA and Rac1 are most extensively studied where their overexpression was found to be closely related to GC progression, while other members are largely uncharted [10].

RhoJ is a recently identified member of Rho family [11, 12]. Although RhoJ shares structural similarities and common effector molecules with other Rho GTPases, it has other distinct characteristics [12-14]. Recently published study demonstrates that RhoJ is enriched in endothelial cells and plays a positive angiogenic role during tumor progression and wound healing [15]. However, little is known regarding the role of RhoJ in non-endothelial cells such as tumor cells. Intriguingly, few recent studies have been published regarding the expression of RhoJ in melanoma cells and addressed its role in the regulation of melanoma cell migration and invasion [16, 17]. Considering these findings, we set out to investigate the possible role of RhoJ during GC progression.

In the present study, we aimed to demonstrate the correlation between RhoJ expression and clinicopathologic parameters as well as to uncover the putative role of RhoJ in regulating GC cell behavior.

Cell lysates were separated with SDS-PAGE and transferred to PVDF membranes (Millipore). The membranes were blocked with 5% skim milk, followed by the incubation with the following primary antibodies: RhoJ (mouse monoclonal, Abnova) and GAPDH (rabbit polyclonal, Santacruz). The bound antibodies were visualized with HRP-conjugated secondary antibodies. Signals were developed with HRP substrate and detected with LAS-1000 (Fuji film).

The cells were placed in a 96-well plate at a concentration of 5×103 cells per well. After incubation for 1 to 3 days, the amount of viable cells was determined using the water-soluble tetrazolium assay (WST) kit (DaeilLab). After incubating the cells with WST solution for 20 min at 37°C, optical absorbance was measured with a microplate reader (Bio-Rad).

4×104 cells were seeded in serum-free medium onto the upper chamber of 24-well culture inserts with 8 μm pores (Millipore) and medium containing 5% FBS was placed in the lower chamber. After 24 hr, the cells on the upper surface of membrane were removed with a cotton swab. The cells that had migrated to the lower surface of membrane were fixed and visualized with 1% crystal violet (Sigma).

Cell invasion was compared using BioCoat MatrigelTM invasion chambers (BD). 4×104 cells were plated in the upper chamber in serum-free medium and the lower chamber was filled with medium containing 10% FBS. After 36 hours, the cells on the upper surface were removed with a cotton swab. The cells that had migrated through the MatrigelTM invasion chamber were fixed and visualized with 1% crystal violet.

70 patients who were diagnosed with primary gastric adenocarcinoma and received radical gastrectomy were enrolled at Yonsei Cancer Center, Severance Hospital (Yonsei University Health System, Seoul, Korea). The clinicopathologic variables including age, sex, histologic type, Lauren's classification, stage, type of surgery, and survival outcome were reviewed retrospectively based on the electronic medical records. Pathological diagnosis and staging of GC was made according to the American Joint Committee on Cancer 2010 staging system. The study was approved by the institutional review board.

Immunohistochemical (IHC) staining was performed on the surgical specimens of GC patients. Slides were antigen-retrieved by autoclaving and blocked. Samples were incubated with RhoJ antibody (mouse monoclonal clone 1E4, Abnova) overnight, followed by incubation with biotinyated secondary antibody. Slides were reacted with Vectastatin ABC reagent (Vector laboratories) and DAB (DAKO) was used as a chromogen. The following scoring system was used to grade RhoJ immunoreactivity: score 0 = no staining or non-specific staining of tumor cells; score 1 = weak and incomplete staining of >10% of tumor cells; score 2 = moderate and complete staining of >33% of tumor cells; score 3 = strong and complete staining of >67% of tumor cells. Those with >10% positive stained tumor cells (scores 1 to 3) were regarded to be RhoJ-positive. RhoJ immunoreactivity in endothelial cells was excluded from analysis. For immunofluorescent (IF) staining, cells cultured on coverslips were blocked and incubated overnight with the phospho-histone H3 antibody (Cell Signaling). Then, slides were incubated with cy3-conjugated secondary antibodies (Jackson ImmunoResearch). Nuclei were stained with DAPI (Invitrogen) and F-actin was stained with Acti-stain Phalloidin (Cytoskeleton). Then the slides were mounted and imaged with a LSM510 confocal microscope (Carl Zeiss).

Survival curves were estimated with the Kaplan-Meier method, and the statistical differences were determined using the log-rank test. Overall survival (OS) was calculated from the date of gastrectomy to the date of death, while recurrence-free survival (RFS) was defined as the interval between the date of gastrectomy and the date of either recurrence or death. Multivariate analyses were performed with the Cox proportional hazard model. Chi-square tests and independent sample t-test were used for the analysis of variables. All statistical analyses were carried out with SPSS version 12.0 (SPSS, Inc.). 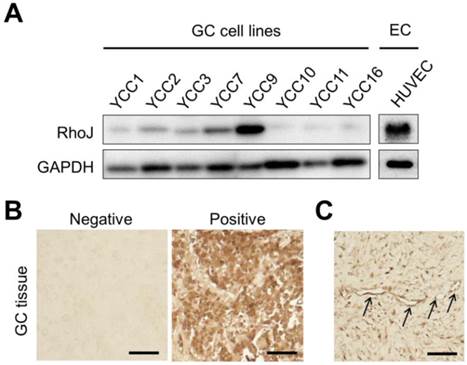 The baseline characteristics of the patient cohort are summarized in Table 1. The median age at the time of GC diagnosis was 62 years (range 33-83) and the male-to-female ratio was 1.9. The most common histologic type was tubular adenocarcinoma (70%) and 57.1% of tumors were classified as diffuse type by Lauren's classification. Almost all patients (94.3%) received adjuvant chemotherapy, while only 2 out of 70 patients (2.9%) underwent adjuvant radiotherapy. The median follow-up duration was 47.5 months and 47.1% of patients were alive at the time of analysis.

To characterize the features of GC patients with RhoJ expression, various clinicopathologic parameters were compared according to the RhoJ expressing status (Table 2). Patients with RhoJ-positive tumors had more diffuse type GC (73.5% vs. 41.7%, p=0.007) at later stages (stage III, IV: 85.3% vs. 58.4%, p=0.023) and distant metastasis (47.1% vs. 11.1%, p=0.001), denoting that RhoJ has a positive role in tumor progression and metastasis. In addition, RhoJ-positive tumors tended to be more poorly differentiated adenocarcinoma and signet ring cell carcinoma compared to RhoJ-negative tumors (82.4% vs. 52.8%, p=0.043). However, there were no significant differences in age, sex, T stage, and N stage between RhoJ-positive and RhoJ-negative GC patients. Moreover, the proportion of patients receiving adjuvant chemotherapy or radiotherapy was not different between RhoJ-negative and RhoJ-positive groups.

Baseline characteristics of the cohort.

On Kaplan-Meier survival analysis, RhoJ-positive group displayed markedly poorer OS and RFS compared with RhoJ-negative group (p=0.001 and 0.002, respectively) (Figure 2A and 2B).

To elucidate the role of RhoJ overexpression on the biologic behavior of GC cells, we established RhoJ-overexpressing (RhoJ-OV) cells by transfecting YCC-16 GC cell lines with RhoJ-expressing plasmid (Figure 3A). The overexpression of RhoJ in RhoJ-OV cells did not affect the proliferation of GC cells compared to empty-vector transfected control (RhoJ-WT) cells (Figure 3B). In addition, there was no difference in the proportion of PH3+ proliferating cells between RhoJ-OV and RhoJ-WT cells (Figures 3C and 3D), indicating that RhoJ has negligible role in the regulation of GC cell proliferation. On the other hand, RhoJ-OV cells displayed 41.3% increase in cell motility across the membrane of cell culture inserts (p=0.015) (Figures 3E and 3F). Moreover, RhoJ-OV cells had 60.4% enhanced invasion ability across the MatrigelTM extracellular matrix compared to RhoJ-WT cells (p=0.024) (Figures 3G and 3H). Taking these results together, we were able to confirm that RhoJ in GC cell plays an important role in the regulation of GC cell motility and invasiveness.

Rho GTPases regulate diverse cellular processes such as cytoskeletal rearrangement, cell motility, cell-cycle progression, and transcription [9,10]. Though there are increasing number of preclinical evidences reporting the importance of Rho GTPases during tumor progression and metastasis [8-10], the clinical significance of Rho GTPases in human cancer is largely unknown, especially in GC. Only few studies reported increased expression of RhoA, RhoC, and Rac1 in GC and their prognostic role in GC [10,18,19].

We were also able to discover the possible mechanism in which RhoJ leads to the progression and metastasis of GC. Our in vitro experiments displayed the increased motility and invasiveness of GC cells where RhoJ was forcefully overexpressed by the transfection of RhoJ-expression vector compared to control GC cells, while there was no difference in terms of GC cell proliferation. This in vitro evidence suggests that the increased progression and metastasis observed in RhoJ-high GC patients might be attributed to the enhanced migratory and invasive ability of highly RhoJ-expressing GC cells. 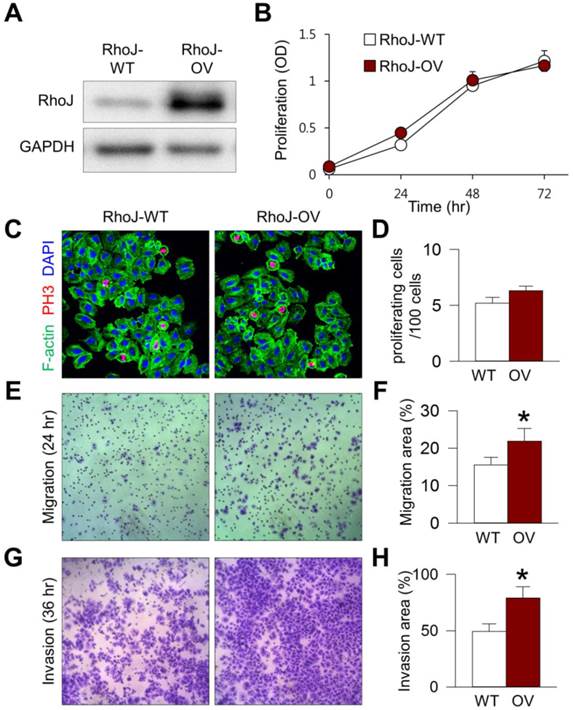 Despite the novel findings of our study, one critical question that remained to be answered in the future is whether RhoJ is a feasible therapeutic target for the treatment of GC. For the moment, there is no direct evidence indicating the therapeutic value of RhoJ blockade in human cancer. However, previous studies employing animal tumor models could provide some hints to this question. The previous work that focused on endothelial RhoJ showed that the genetic deletion of host-derived RhoJ could suppress tumor progression and metastasis through the inhibition of tumor angiogenesis [15]. Besides, Ho et al. reported that the knockdown of RhoJ in melanoma cell with shRNA could delay melanoma growth and lymphatic metastasis [17]. Therefore, the strategy of targeting RhoJ has the potential of dual-targeting of tumor cells and tumor vessels simultaneously. This hypothesis has to be validated with animal models of GC when RhoJ inhibitors are developed and become available.

In conclusion, the current study presents evidence that RhoJ is positively associated with the regulation of tumor cell motility and invasiveness in GC. Moreover, we were able to demonstrate that high RhoJ expression in GC is an independent negative prognostic factor after gastrectomy. Further studies are required to validate the therapeutic role of RhoJ in GC by using RhoJ-specific inhibitor.

All authors disclosed no potential conflicts of interest.

3. Shah MA, Kelsen DP. Gastric cancer: a primer on the epidemiology and biology of the disease and an overview of the medical management of advanced disease. Journal of the National Comprehensive Cancer Network. 2010;8:437-47