Purpose: We performed this study to analyze the clinical features and prognosis of Korean patients with liposarcoma.

Patients & Methods: Between October 1986 and April 2013, 231 patients who were diagnosed with liposarcoma by histologic examination were enrolled in this study.

Liposarcoma is the one of the most common soft tissue sarcomas (STS), consisting of over 50 different malignancies of mesenchymal origin [1, 2]. In adults, liposarcoma is the most common STS with an estimated incidence of 17-25% [3]. It predominantly occurs in the 5th to 6th decade of life, with a slight predominance in males. The majority of cases arise in the extremities, and one third of cases arise in the visceral space [1, 3]. Although surgical resection is the mainstay treatment for localized disease, many liposarcomas progress to advanced disease that is either unresectable, metastatic, or both. For advanced cases, the mortality rate is high and both local and systemic tumor burden can cause significant morbidity [4, 5].

In this study, we analyzed a large population of patients who underwent curative resection for liposarcoma. We analyzed the clinicopathologic features and outcomes in these patients. We further explored independent prognostic factors and devised a prognostic model to facilitate decision making in clinical practice.

Between October 1986 and April 2013, 231 patients, who were diagnosed with liposarcoma by histologic examination, at Yonsei University Health System, Samsung Medical Center, Ilsan Paik Hospital, Seoul Medical Center and Busan Paik Hospital were enrolled. The criteria for inclusion were as follows: (1) pathologically confirmed diagnosis of liposarcoma; (2) a complete set of clinical information, which was defined by patient demographics, primary tumor site, stage, treatment record, and vital status; and (3) the absence of distant metastasis.

Liposarcomas were classified into 5 histologic subgroups based on Evans Classification [6] as well-differentiated, myxoid, dedifferentiated, round, and pleomorphic. The primary lesion sites were categorized into 7 groups including the lower extremities, upper extremities, thoracic cavity, trunk, retroperitoneum, inguinal area, and the head and neck. A primary site was considered as being in the upper extremities when it was at or beyond the shoulder joint, and as the lower extremities when it was located in the thigh or leg. Retroperitoneal tumors were defined, according to the surgical record, as whether any of the following resections were performed (colon, small bowel, pancreas, spleen, bladder, and uterus). Tumor burden was determined by the maximum diameter of the primary tumor at the time of surgery. The resection margin was determined by gross and microscopic examinations and a negative margin was defined as when there was no evidence of tumor cells within ≥1 mm from the edge of the specimen. Administration of postoperative adjuvant radiotherapy or chemotherapy was recorded. This study was carried out in accordance with the Declaration of Helsinki and approved by the Institutional Review Board. Patient information was de-identified and IRB waived informed consent from study subjects.

The primary end-point was to assess survival outcome using the Kaplan-Meier method. The disease-free survival (DFS) was defined as from the time of surgery to initial tumor relapse or death. Overall survival (OS) was defined as from the date of diagnosis to date of death related to the disease or complications. Duration of follow up was defined from the time of diagnosis to death. In the case of death, it was classified as an “event” and, in the case of loss of follow up, it was censoring up to that time. Survival rates were compared using the log-rank test. OS and DFS were assessed with respect to following factors: age, sex, histologic subtype, resection margin (negative or positive), primary site, tumor burden, and adjuvant treatment. Multivariate analysis was performed using stepwise Cox proportional hazards regression modeling. Two-sided P-values ≤0.05 were considered statistically significant.

Two-hundred and thirty-one patients who underwent surgical resection were analyzed. The clinical characteristics of the enrolled patients are presented in Table 1. There were 90 females and 141 males with median age of 55 years (range, 18-90). Median tumor size was 13 cm (range, 1-48), and approximately two-thirds of cases (61.9%) had negative resection margins. The majority of liposarcomas were located in the lower extremities (35.5%) and retroperitoneum (34.2%).

With a median follow-up time of 3.38 years, the 5-year DFS and OS rates for all patients were 54.5% and 75.1%, respectively. The 5-year DFS according to histologic subtypes were 67.8%, 63.5%, 22.1%, 25.2% and 20.5% for well-differentiated, myxoid, dedifferentiated, pleomorphic, and round-cell liposarcoma, respectively (Table 2). The 5-year OS according to histologic subtypes were 87.1%, 79.4%, 49.0%, 50.0%, 42.3% for well-differentiated, myxoid, dedifferentiated, pleomorphic, and round-cell liposarcoma, respectively. Kaplan-Meier analysis revealed that DFS was significantly worse in patients with high-grade histology compared to those with low-grade histology (16.9% vs. 65.7%, P <0.001, Figure 1A). The 5-year OS rates for high and low-grade tumors were 47.8% and 83.5%, respectively (P <0.001, Figure 1B). The most favorable prognoses were observed in patients with liposarcoma located in the inguinal/genitalia regions (80.8%) and the extremities (64.8% for the upper extremities and 77.8% for the lower extremities), whereas the prognoses were reduced in those with liposarcoma located in the trunk (including the retroperitoneum), intra-abdomen, and thoracic cavity (41.8%, 46.4%, and 40.1%, respectively; P = 0.002, Figure 2A). For the primary lesion sites, prognoses were worse for the trunk group (thoracic cavity, retroperitoneum and intra-abdomen) compared with the extremities group (inguinal/genitalia, upper/lower extremity and head/neck) with a median 5-year DFS of 3.3 and 9.9 years, respectively (P <0.001, Figure 2C). Similar patterns were noted for the OS; 5-year OS was significantly worse in the trunk group compared with the extremities groups (median OS, 10.9 vs.15.2 years; P <0.001; Figures 2B and 2D).

A prognostic model for patients with liposarcoma

According to univariate analyses, sex, age, resection margin, tumor diameter, histologic subtype, and primary lesion site were associated with DFS and OS. In the multivariate Cox proportional model, histologic subtype and primary site were significant independent risk factors for DFS and OS (Table 3). Among them, high-grade liposarcoma was significantly associated with a shorter DFS (hazard ratio [HR] 3.01; 95% confidence interval [CI], 1.82-4.97; P <0.001, Table 3). In addition, liposarcoma located in the trunk was a significantly poor prognostic factor for DFS (HR 1.80; 95% CI, 1.12-2.89; P = 0.015). However, there were no significant associations with tumor relapse and mortality in terms of median tumor diameter, sex, age, adjuvant treatment, or resection margin status. Similar relationships were noted for OS (Table 3).

Survival outcome according to histologic subtypes. (A) DFS and (B) OS. 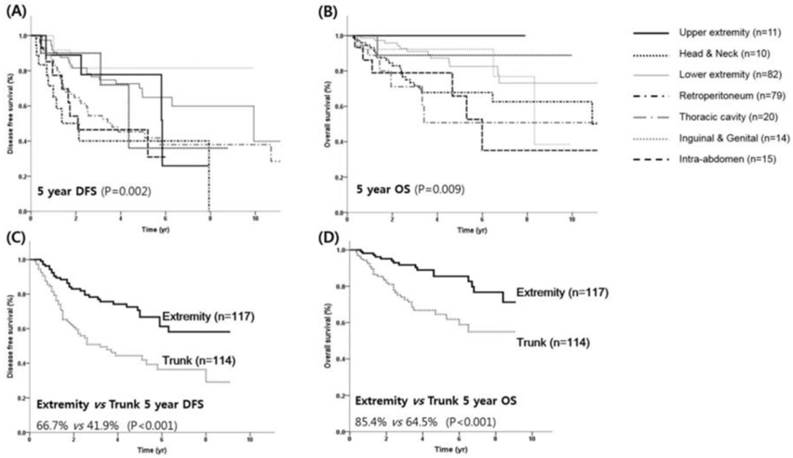 Using the independent prognostic factors (histologic grade and primary site), prognostic grouping was performed according to the following criteria: group 1(n = 98), no risk factors; group 2 (n = 92), one risk factor; and group 3 (n = 41), two risk factors. Kaplan-Meier survival curves according to the prognostic index are shown in Figure 3. The prognostic model separated patients into three risk groups with significantly different survival outcomes. The 5-year DFS rates for groups 1, 2, and 3 were 73.6%, 50.8%, and 19.2%, respectively (Figure 3A). The 5-year OS rates for groups 1, 2, and 3 were 89.2%, 74.8%, and 41.4%, respectively (Figure 3B).

In the present study, we investigated the clinicopathologic characteristics of primary liposarcoma. To our knowledge, this is the most up-to-date report providing a comprehensive epidemiological and prognostic evaluation in a large Asian liposarcoma population. In addition, we established a prognostic model to facilitate risk-adapted therapeutic strategies.

Liposarcoma accounts for ~20% of STS cases in adults [12]. Accumulating evidence has suggested that major histologic subtypes of liposarcoma have differing clinical outcomes. Regarding incidence, previous studies have described few specific subtypes or organ sites and most of patients enrolled in these studies were Caucasian [13-17]. Therefore, though histologic classification is considered the most relevant prognostic factor for survival, there is limited prevalence data in Asian patients. We previously reported the clinical characteristics and outcome of curatively resected liposarcoma [18]. However, this was a single-center investigation with 94 cases, therefore, in the present study, we investigated a large homogenous Korean population and conducted subgroup analysis. A previous study indicated that the liposarcoma subtype distribution in Western patients was well-differentiated (46%), dedifferentiated (18%), myxoid (18%), round-cell (10%), and pleomorphic (8%) [19]. The present study in Korean patients demonstrated a similar frequency of histologic subtype, in which the most common types were well-differentiated followed by myxoid and dedifferentiated types.

In the present study, the DFS and OS were well stratified according to histologic subtype. Well-differentiated and myxoid type were defined as low-grade whereas dedifferentiated, round, and pleomorphic liposarcoma were considered high-grade. The 5-year DFS and OS were significantly different between the two groups. Multivariate analyses demonstrated that histology was an independent prognostic factor for survival. These findings are congruent with those of Dalal et al. [19] who evaluated 801 nomograms for liposarcoma patients and who noted similar survival outcomes to those presented here. Confirming that histologic subtype is a strong, independent, prognostic factor for survival in patients with liposarcoma.

Regarding the primary sites, nearly two-thirds of tumors were located in the lower extremities and retroperitoneum. This finding is consistent with previous Western studies demonstrating that 25-33.4% of primary lesions were retroperitoneal [19, 20]. In addition, the present study demonstrated that extremity sites had a significantly favorable DFS compared with retroperitoneal sites. Previous studies have considered the lower extremities to represent the groin, thigh, or leg, whereas retroperitoneal tumors were those found in the as bowel, kidney, pancreas, bladder, and uterus. However, in the present study, we defined the inguinal/genitalia as the groin, thigh, bladder, and uterus. Contrary to patients with retroperitoneal tumors, those with tumors in the inguinal/genitalia area demonstrated a favorable survival outcome. Furthermore, we also demonstrated that those with lesions in the head and neck had better survival compared to those with lesions in the trunk. The newly classified favorable subgroups (inguinal/genitalia) might have been misclassified as the poor survival group (trunk) in previous studies. Therefore, we have elucidated the prognostic role of primary tumor sites in liposarcoma with increased clarity.

To enhance risk-based prediction after curative resection, we established a prognostic model. Primary lesion site and histologic subtype were significant independent prognostic factors, thereby, we performed prognostic grouping based on a scoring system for these factors. This yielded three distinctive groupings with differing survival outcomes according to the number of risk factors present. Given the poor prognosis of patients with >1 risk factors, this subgroup of patients may benefit from more aggressive pre and postoperative treatments; therefore, aggressive postoperative treatment in the context of clinical trials may be needed for group 2.

The role of adjuvant chemotherapy or radiotherapy is poorly defined in patients with liposarcoma. In a retrospective study that included 112 patients with liposarcoma who underwent perioperative radiotherapy, Zagars et al. [[21]] showed that outcome was mainly determined by histologic subtype. Patients with well-differentiated and myxoid liposarcoma achieved a local control rate of 90%, whereas those with pleomorphic liposarcoma high a high incidence of local (37%) or distant (41%) recurrence. In the present study, the impact of adjuvant treatment was not statistically significant. For metastatic or unresectable STSs, despite first-line standard treatment using a doxorubicin-containing regimen, the median OS was dismal (12 months) [22]. In addition, gemcitabine and docetaxel are frequently used as a second-line treatment for STSs [23], although the response rate was been reported as 16%, with two patients exhibiting stable disease. A potential breakthrough in the management of STSs has been the recent introduction of pazopanib [24]. However, pazopanib has shown favorable efficacy in leiomyosarcoma and synovial sarcoma, but not in liposarcoma [25]. The underlying biological mechanisms of poor response to chemotherapy or radiotherapy have not been defined, but they might partially depend on the heterogeneity of histologic subtypes. Therefore, further histology-based strategies are strongly warranted.

This is the first study to comprehensively review and describe the clinical features and prognosis of Asian liposarcoma patients. Histologic subtype and primary tumor site were independently associated with disease-specific survival. The proposed model for primary liposarcoma demonstrated distinct groups of patients with good prognostic discrimination. We believe that the findings of the present study could facilitate further prospective studies and confirm an alternative clinical decision-making process for Asian patients with liposarcoma.