Purpose: We aimed to elucidate the association between perioperative blood transfusion (PBT) and the prognosis of patients undergoing curative surgery for renal cell carcinoma (RCC).

Methods: In all, 3,832 patients with RCC who had undergone curative surgery were included in this study from a multicenter database. PBT was defined as the transfusion of packed red blood cells within seven days before surgery, during surgery, or within the postoperative hospitalization period. The association of PBT with oncologic outcomes was evaluated using univariate and multivariate Cox regression analyses, and regression adjustment with propensity score matching.

Conclusions: This multicenter database analysis demonstrates no significant prognostic association between PBT and oncologic outcomes in patients with RCC.

The induced immunosuppressive effect of perioperative blood transfusion (PBT) was first described in 1974 in a report of prolonged survival of mismatched renal allografts in patients who had been transfused [4]. The immunosuppressive effect of PBT has led to concerns about its adverse effects on the postoperative outcomes of cancer patients [5]. Since the first study reported a higher recurrence rate in transfused patients after colon cancer surgery [6], numerous studies have addressed the effect of PBT on subsequent recurrence or survival in several solid tumors [7-11]. With regard to RCC, some studies have suggested that PBT was significantly associated with poor prognosis after radical or partial nephrectomy [12, 13], however, other studies failed to find such an association [14, 15]. This controversy might stem from the limitations of these studies, which used small sample sizes from single institutions with different policies for PBT.

In light of these controversial findings, we explored the association between PBT and the oncologic outcomes of patients undergoing curative surgery for RCC, controlling for known clinicopathologic predictors.

We used clinical data derived from the KORCC (KOrean Renal Cell Carcinoma) database, a nationwide multicenter database in 7 hospitals in Korea. Included in the KORCC database were 4,055 patients who had undergone radical or partial nephrectomy for RCC in one of the participating hospitals. Clinical data were reviewed and collected in the form of a standardized electronic case report that included the following: (1) preoperative data, including age, gender, body mass index (BMI), previous medical history, Eastern Cooperative Oncology Group (ECOG) performance status, American Society of Anesthesiologists (ASA) status classification system, and symptoms at diagnosis; (2) preoperative laboratory findings; (3) surgical data, including the operative method, operative time, estimated blood loss, and PBT; (4) pathologic data, including TNM stage, histologic subtype, Fuhrman's nuclear grade, mass size, sarcomatoid differentiation, and necrosis; and (5) postoperative follow-up data, including disease relapse, death, and cause of death. PBT was defined as the transfusion of packed red blood cells within seven days before surgery, during surgery, or within the postoperative hospitalization period, and transfusion of other blood products, including fresh frozen plasma or platelets, were not included. TNM staging followed the 7th TNM classification of the Union for International Cancer Control (UICC) and the American Joint Committee on Cancer (AJCC) guidelines [16], and histological subtypes followed the UICC/AJCC and Heidelberg recommendations [17]. Vital status and cause of death was determined by reviewing the patient's medical records and/or by reviewing the Korea National Statistical Office database. After approval by the Institutional Review Boards of the Catholic University of Korea, Seoul St. Mary's Hospital, we performed a retrospective analysis of 3,832 patients with available information regarding PBT.

Differences between groups were evaluated using the Wilcoxon signed rank-sum test for continuous variables and the chi-square test for categorical variables. The association between variables and PBT was evaluated using logistic regression analysis. Oncologic outcomes measured included relapse-free survival, cancer-specific survival, and overall survival rates. Relapse-free survival and cancer-specific survival rates were calculated using the cumulative incidence method with consideration of a competing risk of non-RCC-related death. Overall survival was analyzed using the Kaplan-Meier method. Associations between PBT and oncologic outcomes were analyzed using a proportional hazards model for the subdistribution of a competing risk in disease relapse and cancer-specific mortality, and Cox proportional hazard regression models in all-cause mortality.

The estimated propensity score for PBT was obtained from the fit of a logistic regression model for which we considered 34 known clinically important variables, some of which are listed in Tables 1, 2, and 3. The logistic model used to estimate the propensity score yielded a c-statistic of 0.862. One-to-one matching was performed using the Greedy matching method, and the balance of the patients according to the PBT was evaluated using the standardized difference and significance testing (Wilcoxon signed rank-sum test and Cochran Mantel-Haenzel test for pair-matched data) after propensity score matching.

Of 3,832 patients undergoing curative surgery for RCC, 447 patients (11.7%) received PBT. Baseline demographics for these patients, as well as for the patients who did not receive PBT, can be found in Table 1. Before propensity score matching, patients in the transfusion group were significantly older, and had lower BMI, higher comorbidities, worse ECOG performance status, and more initial symptoms. Matching of patients according to a propensity score resulted in a cohort that consisted of 366 patients in the non-transfusion group and of 366 patients in the transfusion group. Standardized differences for all measured variables except operation time and blood loss were <10%, suggesting substantial balance across the groups (Table 1, 2, and 3). In the propensity-matched cohort, baseline demographics were not significantly different between the non-transfusion and transfusion groups.

In the unmatched patients, the pathologic TNM stage was significantly higher in patients who received PBT. Likewise, a larger mass size, a higher nuclear grade, more sarcomatoid differentiation, and more tumor necrosis were all observed more frequently in patients who received PBT. However, after propensity score matching, all these pathologic variables were equivalent between the matched groups (Table 3).

Whether PBT has an adverse effect on oncologic outcomes after curative surgery in patients with RCC still remains controversial. In our study, PBT was one of the significant prognostic factors for disease relapse, cancer-specific mortality, and all-cause mortality in the unadjusted analysis. Receipt of PBT was associated with poor preoperative general conditions and worse pathologic features. However, after adjusting for confounding variables using both multivariate Cox regression and propensity score matching analyses, our results indicate that PBT does not influence the prognosis of patients who received curative surgery for RCC. Thus, the negative association between PBT and poor prognosis might be due to the overall severity of the patients' illness requiring PBT, but not due to the PBT itself. 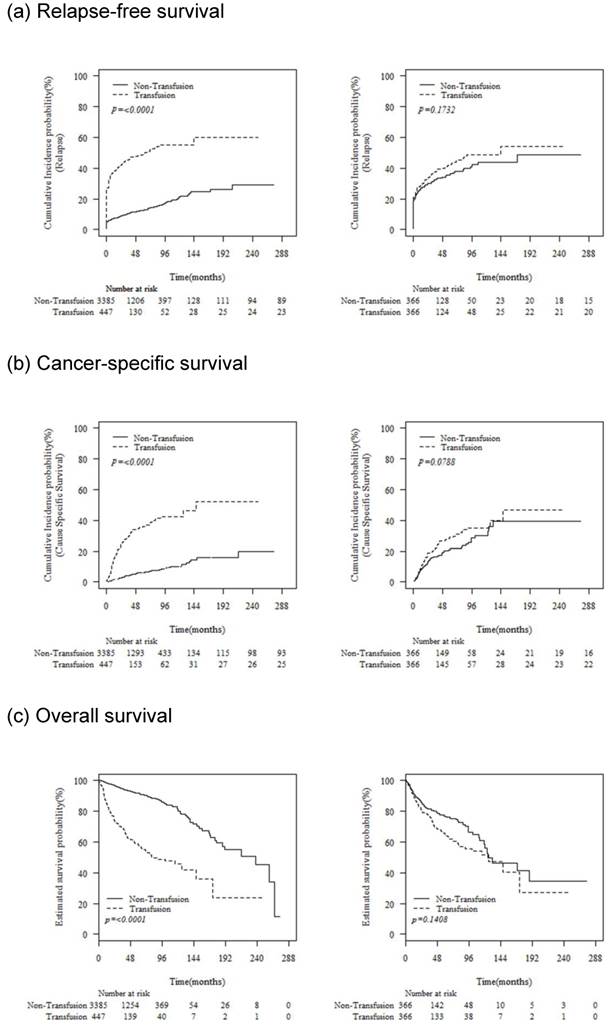 The adverse effect of PBT observed in several cancers is speculated to be a result of immunosuppression [4, 5] and the induction of angiogenesis [18, 19]. Many experimental studies show changes in immune function, including decreased Th1 and increased Th2 cytokine production, decreased numbers of CD4 helper cells and natural killer cells, and increased numbers of CD8 T cells [4, 5, 20]. Moreover, PBT may promote tumor proliferation by inducing angiogenesis [18, 19]. Patel et al. reported that PBT is associated with a significant increase in vascular endothelial growth factor and a decrease in endostatin, which might be associated with an elevation of in vitro angiogenesis [18]. Also, Nielsen et al. demonstrated that soluble vascular endothelial growth factor is present in various blood products used for transfusion [19]. However, their contribution to in vivo immunosuppression or angiogenesis remains speculative. The immune response is a complex biological phenomenon of cell-to-cell interactions mediated by many intercellular and intracellular molecules. It is also known that changes in human immune parameters after allogenic transfusion are not always consistent [21, 22] and that clinically significant immunosuppression is not universal.

Although RCC is considered to be an immunogenic tumor, limited studies comparing the prognosis of patients who underwent curative surgery for RCC with or without PBT have shown conflicting results. Similar to our study, several previous studies have demonstrated no statistically significant association between PBT and poor oncologic outcomes in patients with RCC [14, 15]. More recently, Linder et al. also reported that PBT was not associated with cancer-specific mortality (HR, 1.15; p = 0.31) or disease recurrence (HR, 1.04; p = 0.77), while the association of PBT with all-cause mortality (HR, 1.23; p = 0.02) was statistically significant [12]. A substantial weakness of these previous studies is their small sample size and lack of matching for confounding variables. Our study confirms the results from these previous studies in a large multicenter cohort using Propensity score analysis to minimize the biases from confounding factors between the groups.

Conversely, Soubra et al. reported that PBT was associated with greater cancer-specific mortality (HR, 1.315; p = 0.0069) and all-cause mortality (HR, 1.347; p < 0.0001) in 14,379 patients with RCC using the Surveillance, Epidemiology, and End Results-Medicare data set [13]. However, their study was limited in that there were many patients without information regarding clinically important pathologic variables, such as tumor stage (344 out of 1501 patients), and tumor grade (439 out of 1501 patients), which can lead to invalid and biased conclusions, even though they performed Propensity score matching.

We found that PBT is clearly associated with more aggressive disease and worse clinical features that, in themselves, are independent predictors of poor oncologic outcomes. Patients receiving PBT were significantly older, had more comorbidities, had worse ECOG performance status, and were more likely to have advanced disease. Results from previous studies support the association of PBT with adverse clinicopathologic parameters. Linder et al. found that patients receiving PBT were significantly older, with a higher frequency of symptomatic presentation, worse ECOG performance status, and more frequent adverse pathologic features [12]. Also, Soubra et al. demonstrated that the odds ratio of PBT increased with age, gender, tumor stage, surgical volume, and Charlson comorbidity index [13]. Taken together, our findings and those of others lead us to conclude that poor oncologic outcomes in patients who received PBT reflect patients' overall severity of illness.

The potential limitations of our study should be addressed. First, the retrospective nature of this study may have resulted in selection bias. Although we performed propensity score analysis to simulate randomization, there remained a possibility of uncontrolled confounding factors between the groups. However, for ethical reasons, it may be impossible to perform a randomized control trial in which patients are randomly assigned to receive PBT or not. Second, the transfusion strategy might have been influenced over time and according to the physicians' discretion. Moreover, the amount of PBT, which may affect patients' outcome in a dose-dependent manner, could not be evaluated due to its retrospective nature.

We found that receipt of PBT was associated with more aggressive disease and worse clinical features. After adjusting for confounding variables using both multivariate Cox regression and propensity score matching analyses, our results indicate that PBT does not influence the prognosis of patients who received curative surgery for RCC.

The statistical consultation was supported by a grant of the Korean Health Technology R&D Project, Ministry of Health & Welfare, Republic of Korea (HI14C1731).

10. Amato A, Pescatori M. Perioperative blood transfusions for the recurrence of colorectal cancer. The Cochrane database of systematic reviews. 2006 CD005033

16. Edge SB, Compton CC. The American Joint Committee on Cancer: the 7th edition of the AJCC cancer staging manual and the future of TNM. Annals of surgical oncology. 2010;17:1471-4