Methods: We measured expression of GOLPH3 mRNA in the human colon cancer cell lines HCT116, HT29, SW480 and SW620 by RT-PCR, and the cells with the highest expression were selected and divided into four groups: negative control, GOLPH3 siRNA transfection (siRNA-GOLPH3), Akt inhibitor (Tricinbine), and glycogen synthase kinase (GSK)-3β inhibitor (TWS119). After human colon cancer cells were transfected with siRNA-GOLPH3, we used RT-PCR to investigate the silencing effect of GOLPH3 gene. We assessed the activity of the Wnt signaling pathway in all groups using the Topflash method. Proliferation and apoptosis of colon cancer SW620 cells were detected by MTT assay, colony formation assay and flow cytometry. Expression of Golgi phosphoprotein (GOLPH)3, β-catenin, GSK-3β and pS9-GSK-3β in cancer cells was determined by Western blotting.

Conclusions: Overexpression of GOLPH3 gene activated the Wnt signaling pathway, as well as increasing expression of β-catenin, promoting proliferation and inhibiting apoptosis in human colon cancer cells. The mechanism of action was that overexpression of GOLPH3 gene activated Akt, which may also further activate the Wnt signaling pathway via GSK-3β, and promote proliferation in human colon cancer cells.

Colon cancer is the most common of the digestive neoplasms and the fourth most frequent cause of cancer-related death worldwide, and its incidence continues to show an upward trend. Carcinogenesis and progression of colon cancer are still unclear, but the disease course is accompanied by numerous genetic alterations, including oncogenes and tumor suppressor genes, such as P53, PTEN and K-ras. These genes act on different loci in the intracellular signal transduction cascade, and influence cancer cell growth, proliferation and apoptosis. There are two important intracellular signaling pathways in colon cancer, PI3K/Akt/mTOR and Wnt/β-catenin, which are closely related to differentiation, proliferation, migration and adhesion of cancer cells, and also have many attractive potential targets1.

Golgi phosphoprotein (GOLPH)3, also known as GPP34, is localized on human chromosome 5p13; a region that is frequently amplified in several types of solid tumor. Recent studies indicate that GOLPH3 can activate the PI3K/AKT/mTOR signaling pathway through phosphorylation both of mammalian target of rapamycin complex (mTORC)1 and mTORC2, resulting in cell proliferation2-4. GLOPH3 is a novel oncogene that is overexpressed in prostate cancer5, gastric cancer6,7, hepatic carcinoma8,9 and pancreatic ductal adenocarcinoma10, but also correlated with poor prognosis.

Four human colorectal cancer cell lines HCT116, HT129, SW480 and SW620 were purchased from the Type Culture Collection of the Chinese Academy of Sciences (Shanghai, China). All cell lines were maintained in RPMI-1640 medium (Invitrogen, Carlsbad, CA, USA) supplemented with 10% fetal bovine serum and grown in a humidified incubator with 5% CO2 at 37°C.

Colon cancer cell lines with high expression of GOLPH3 were divided into four groups: control group (Equivalent PBS), siRNA transfection group, Tricinbine group (Akt inhibitor) and TWS119 group (GSK-3β inhibitor). We continued to culture the cells, and detected expression of GOLPH3 mRNA in the group with siRNA transfection, as for the RT-PCR method.

The culture medium was removed and the cells washed with PBS. When adding 100 μl Harvest buffer to lyse the cells 10 min later, we withdrew 40 μl lysate into the centrifuge tube and added 20 μl firefly luciferase substrate or Renilla luciferase substrate (Beyotime Biotechnology, Nanking, China). Once mixing evenly by vortex, we detected firefly and Renilla luciferase fluorescence with a photometer (Beckman Coulter America). The ratio of the above two values [relative luminescence units (RLU) value] indicated the activity of cellular transcription factors in the Wnt signaling pathway.

The cell suspension was inoculated into a 96-well plate, with each well receiving 100 μl (105 cells), and cultured by the anchorage-dependent way for 24 h. Next each group set up four double wells and four control wells that only contained cells without any other treatment. After 48 h culture, 10 μl of 5 mg/ml MTT (Sigma, St Louis, MO, USA) was added to each well, followed by further culture for 4 h, after which, the culture medium was discarded. To each well, we added 150 μl DMSO (Sigma), and the wells were mixed by oscillation in the dark. OD490 was measured with a microplate reader (Huadong Electronics, China) after the crystals dissolved. The formula: Rate of growth inhibition in cancer cells = (1 - average OD490 in treatment groups/average OD490 in control groups) × 100%.

Cells in logarithmic growth phase were inoculated into six-well plates containing complete culture medium and 500 cells per well. During the next 3 weeks, the medium was changed once every 3 days. Once the clones became visible, culture was terminated; the cells were washed with PBS and fixed in 100% methanol. After staining with crystal violet dye for 30 min, the cells were washed three times with PBS and clones were counted under an inverted microscope. Clones were colonies of ≥50 cells. The above steps were repeated three times and the average was calculated.

Expression of GOLPH3 mRNA in various colon cancer cell groups. The expression of mRNA GOLPH3 was detected by RT-PCR after four kinds of cancer cells were cultured under the same conditions. 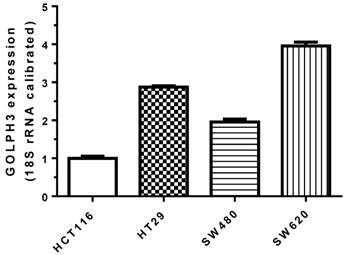 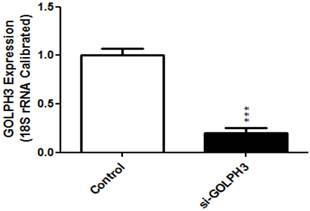 We used the Topflash reporter assay to compare activation of the Wnt signaling pathway among the cell lines. The RLU values (relative luciferase activity) of the three experimental groups (siRNA-GOLPH3, Tricinbine and TWS119) were significantly lower than in the control group (P<0.01). Compared with each two of the experimental groups, the RLU value did not differ significantly in cancer cells (P>0.05). Consequently, silencing GOLPH3 gene expression, blocking Akt loci and inhibiting GSK-3β can decrease activation of the Wnt signaling pathway in SW620 colon cancer cells (Figure 3).

Proliferation and apoptosis of cancer cells 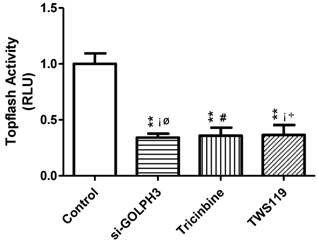 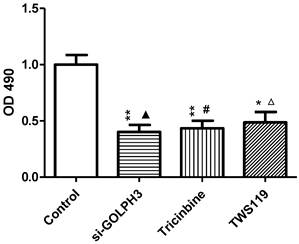 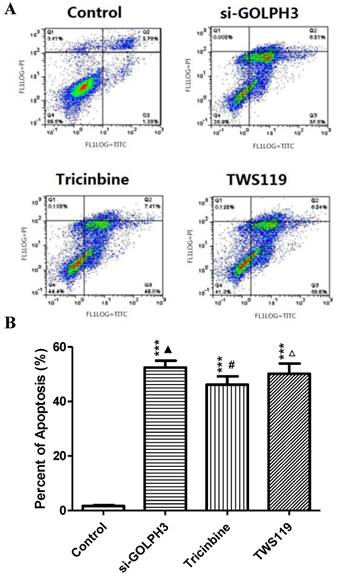 The above results showed similar effects on cell proliferation and apoptosis in the three experimental groups. We detected expression of β-catenin, GSK-3β, pS9-GSK-3β and GOLPH3 by Western blotting (Figure 7A, B, Table 1). Compared to the control group, expression of GOLPH3, pS9-GSK3β and β-catenin proteins was significantly decreased in the siRNA-GOLPH3 group (P<0.001), but the level of GSK-3β did not differ significantly in the Tricinbin group (P>0.05). Expression of β-catenin was lower in the siRNA-GOLPH3 and Tricinbine groups than in the TWS119 group. Expression of GOLPH3 protein was lower in the siRNA-GOLPH3 group than in the other experimental groups, and there was no difference between the latter two groups.

Data represent the mean±SD expressed as percentage of untreated control. 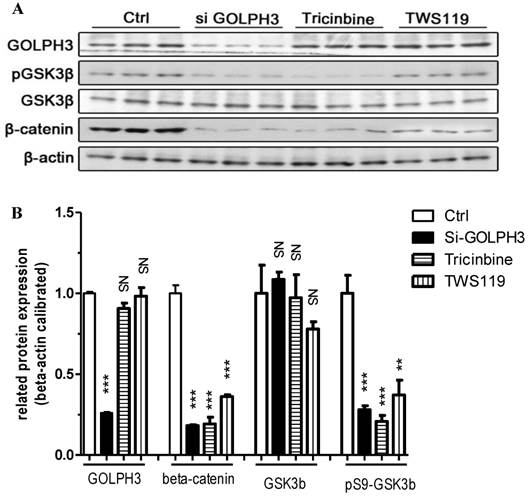 We found that expression of β-catenin in the group with added GSK-3β inhibitor was higher than that in the other two groups, but the expression of GSK-3β and pS9-GSK3β was not significantly different in each group. Therefore, we infer that GOLPH3 may also activate the Wnt signaling pathway by other means. Some studies have shown that GOLPH3 can affect the activity of the Wnt signaling pathway, mediated by VPS35, which is probably by regulating the transport of Wnt protein between endosomes and the Golgi4,21. Another possible mechanism may be by interfering with the recovery and recycling of Wntless, which plays a key role in Wnt protein secretion22,23. Therefore, further study of the relationship between GOLPH3 gene and Wnt signaling pathway in colorectal cancer cells is needed.

In conclusion, overexpression of GOLPH3 gene in SW620 colon cancer cells can promote cancer cell proliferation and inhibit apoptosis by activating the Wnt signaling pathway. The mechanism may be that overexpression of GOLPH3 gene activates Akt, and further activates the Wnt signaling pathway mediated by GSK-3β. GOLPH3 can be used as a potential therapeutic target against colon cancer.

We wish to thank Prof. Huang Weifeng and members of the field laboratory for their helpful advice, reagents, and support. The study was supported by the Nursery Fund and Research Fund of the Second Affiliated Hospital of Fujian Medical University, and Fujian Natural Science Foundation of China.

The authors declare that there is no competing interest related to this study.