Pathologic Diagnosis of Pancreatic Adenocarcinoma in the United States: Its Status and Prognostic Value

Pathologic diagnosis is the golden standard for cancer diagnosis. The majority of patients with pancreatic cancers have metastatic or locally advanced disease at the time of diagnosis, therefore these patients are no longer candidates for surgical resection (12). Pancreatic biopsy is a common procedure to obtain pathology diagnosis for pancreatic cancer patients. The biopsy can be made using fine needle aspiration (FNA) with either endoscopic ultrasound (EUS) or computed tomographic (CT) guidance (13-15). Potential risks of biopsy include bleeding and infection (12, 14, 16). In some cases when the FNA biopsy cannot be obtained, other acceptable methods of biopsy exist, such as intra-ductal biopsy via endoscopic cholangioscopy, percutaneous approach or laparoscopic biopsy (17, 18). However, since pancreas is a retroperitoneal organ, not all the patients can undertake the biopsy. Even for those who receive the biopsy, there is risk of false negative (12, 14, 15, 17, 19-21). For all kinds of reasons, there are some patients without pathologic diagnosis but the radiography examination or tumor markers such as CA 19-9 indicate the presence of pancreatic cancer (22).

How many pancreatic adenocarcinoma patients are diagnosed without microscopically confirm? What factors are related to no pathologic diagnosis? Does it affect the prognosis of pancreatic cancer patients? Till now there is no report on it.

Patients were classified as married and unmarried. Unmarried patients included single (“Single” and “Unmarried or Domestic Partner”), separated/divorced (“Separated” and “Divorced”) and widowed.

The patients' demographic and tumor characteristics were summarized with descriptive statistics. Comparisons of categorical variables among different groups of patients were performed using the Chi square test, and continuous variables were compared using Student's t test. The primary endpoint of this study was cause specific-survival (CSS), which was calculated from the date of diagnosis to the date of cancer specific death. Deaths attributed to pancreatic cancer were treated as events and deaths from other causes were considered as censored observations. Survival function estimation and comparison among different variables were performed using Kaplan-Meier estimates and the log-rank test. The multivariate Cox proportional hazard model was used to evaluate the hazard ratio (HR) and the 95 % confidence interval (CI) for all the known prognostic factors. We used log-rank test to analyze the potential relating factors to no microscopic confirmation. All of statistical analyses were performed using the Intercooled Stata 13.0 (Stata Corporation, College Station, TX). Statistical significance was set at two-sided P < 0.05.

This study was deemed exempt from institutional review board approval by Sun Yat-sen University Cancer Center; informed consent was waived.

Factors related to no pathologic diagnosis

Factors related to no pathologic diagnosis.

Survival difference between patients with and without pathologic diagnosis. 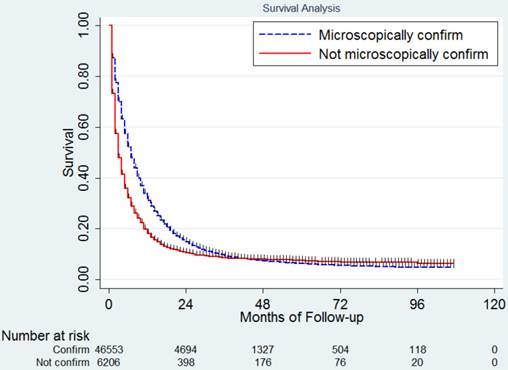 Multivariable analysis for survival in the whole population.

This is the first study to demonstrate the status of pathologic diagnosis for pancreatic adenocarcinoma patients. Amazingly, we found 11.76% of patients were diagnosed as pancreatic cancer without pathologic confirm in the SEER database. Factors related to no pathologic diagnosis including older age, reported from nursing/convalescent home/hospice or physician's office/private medical practitioner, early year of diagnosis, larger tumor size, locating in pancreatic head, unmarried patients, uninsured and stage I disease. Age was the most important factor contributing to no pathologic diagnosis. The peak incidence of pancreatic cancer occurs in the seventh and eighth decades of life (1). The median age was 80 for those without pathologic diagnosis and 67 for those with. The median age for patients in the previous reports about biopsy was about 53-61 years old (13, 14). Elderly patients were at higher multi-morbidity risks from many aging-related diseases (23) and may therefore could not bear biopsy or surgery. New diagnosis techniques for elderly patients are wanted.

Unmarried patients had a higher rate of no pathologic diagnosis. Previous studies showed that spouse might provide social support and encourage the patients to seek medical treatment (24, 25). Similarly, the insurance status would also affect the diagnosis and treatment of pancreatic cancer (26, 27).

We found that about 50% of the patients without pathologic diagnosis had unknown stage while only 8.83% patients with pathologic diagnosis had unknown stage. For patients without pathologic diagnosis, there was always a concern whether they were malignant diseases, even if they were, what their histologic subtypes were. Chronic pancreatitis, other benign conditions and malignant diseases were all possible differential diagnosis for patients suspected of having pancreatic adenocarcinoma cancer (33-35). These diseases had a better prognosis than pancreatic adenocarcinoma (18, 36-38). Speer AG et al. retrospectively analyzed the long term survival of pancreatic cancer patients and found that among 763 patients, 20 patients survived to 5 years. Moreover, they found that of the 20 patients, 10 did not have histological confirmation of carcinoma and were presumably false-positive diagnoses (39). Sinn M et al. analyzed patients with long term survival from the CONKO-001 study. They found 39 (11.0%) patients with an overall survival ≥5 years and available tumor specimens. Histological re-evaluation confirmed adenocarcinoma in 38 patients and 1 patient turned out to be high-grade neuroendocrine tumor (38). Long-term survival could be achieved in pancreatic adenocarcinoma patients but there was risk of misdiagnosis. Especially for those without pathologic confirm, the risk of false-positive diagnoses could not be excluded.

Of note, the little effect of therapy on long term survival and risk of misdiagnosis for those without pathologic diagnosis might be responsible for the crossover of survival curve after 40 months.

Potential limitations of our study should be taken into consideration. Firstly, data related to chemotherapy were not available in SEER database. Secondly, not all the patients enrolled for analysis had the full information of all the clinical features. For example the information of insurance was available after 2007. Finally, the genetic difference among patients were also out of our reach. Patients with a long term survival might have a relatively indolent biology behavior compared with those with short term survival.

We would like to thank the staff members of the National Cancer Institute and their colleagues across the United States and at Information Management Services, Inc., who have been involved with the Surveillance, Epidemiology and End Results (SEER) Program.

All authors declared that there is no conflict of interest.