Effect of Ulcerative Colitis on Incidence of Colorectal Cancer: Results from the Nationwide Population-Based Cohort Study (2003-2013)

Purpose: The colorectal cancer (CRC) is the third leading cause of death in Korea. Ulcerative colitis (UC) is regarded as a risk factor of CRC. The aim of study is to confirm the incidence of CRC among subjects with and without a diagnosis of UC based on a sample of the Korean population. This study identified the effect of UC on incidence of CRC in Korea.

Method: The data were from the population-based cohort containing National Health Insurance (NHI) claims from 2002 to 2013. We washed out first year (2002) for newly detected cases. Subjects who were under 20 years of age, diagnosed UC and CRC in 2002 development of CRC before diagnosis of UC since 2003, were excluded from analyses. Among 745,641 subjects during 11 years of follow-up (2003-2013), 7,448 patients with CRC were newly detected. Cox proportional hazard regression model was used to estimate the hazard ratio (HR) of UC for CRC incidence. Confounding variables including gender, baseline age, type of social security, income level, residence, Charlson Comorbidity Index, hypertension and diabetes mellitus were incorporated into the model.

Results: Overall annual incidence of UC and CRC were 6.7 and 95.4 per 100,000 during 11 years (2003~2013), respectively. Among 522 of newly detected UC cases, CRC incident cases were 12 cases during 11 years. The effects were stronger for male. Advancing age and Charlson Comorbidity Index, hypertension and diabetes mellitus increased the risk of CRC. This study showed that the adjusted hazard ratio of UC in incidence of CRC is 1.92 (95% confidence interval: 1.09-3.38). Also, male patients with UC have more HR than female patients with UC.

Conclusion: The results of this study showed that patients with UC are the high risk group in incidence of CRC. Furthermore, the effects of UC in male patients are higher than those in female. The future study is needed to identify the effect of UC on mortality of CRC.

The incidence of colorectal cancer has increased by 2 to 4 times during the past few decades in many Asian countries, including South Korea, China and Japan.[2] One of the reasons for increasing CRC is changes in dietary habits and lifestyle.[3, 4] Increased consumption of meat and animal fat might be a reason for rising incidence of colorectal cancer.

While the incidence of UC in Korea is still lower than those in Western countries, it is rapidly increasing.[13] It is anticipated that the incidence of UC-associated CRC will also increase. It is important to identify risk factors that influence developing CRC. The purpose of this study was to identify the association between UC and CRC using nationwide population-based cohort data in Korea.

National Health Insurance Service (NHIS) has established the nationwide cohort containing medical care claims from 2002, the baseline year. The number of cohort population was 1,025,340 accounting for about 2% of total Korean population. The cohort was followed until 2013. The sampling method is a stratified sampling by gender, age, and income level. Gender and age were categorized into 2 (male, female) and 18 (0, 1~79 (5yrs), 80+). Income level was categorized into 41 (medical aid: 1, industrial worker (IW): 20, self-employee (SE): 20). Total stratified categories were 1,476 strata.

Flowchart of the subjects included for analysis 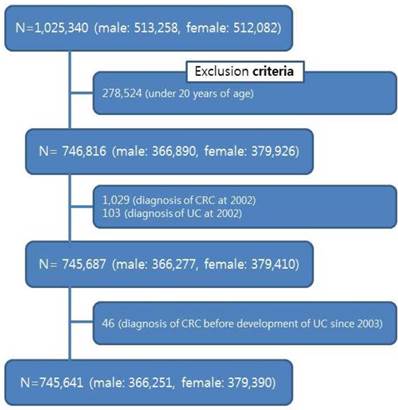 The diagnosis of UC was an independent variable. According to the 10th version of International Classification of Diseases (ICD-10), UC was designated with the code of main sick K51. The annual incidence of UC was 4.6 per 100,000 during 7 years (2006-2012).[12] On average, patients with UC have used clinics or hospitals 6.4 times per year in Korea. Based on annual incidence and utilization, the patients with UC were defined as visiting clinics or hospitals ≥ 4 times annually.

Confounding variables included gender, baseline age, type of social security, income level, residence, Charlson Comorbidity Index (CCI),[14, 15] hypertension and diabetes mellitus. Age was divided to 4 groups (20-34, 35-49, 50-64, 65 and over years). The type of social security consists of medical aid and health insurance in Korea. Health insurance was divided into industrial worker (IW) and self-employer (SE). Income level was recoded into 5 categories, from quintile 1 (low) to quintile 5 (high), according to insurance premiums of householders. The residence was divided into capital city (Seoul), big cities, medium and small cities and rural areas. The CCI was recoded into 3 categories (0, 1, ≥2). The hypertension and diabetes mellitus were defined as cases of subjects diagnosed with I10 ~ I15 and E10 ~ E14 in 2003. Survival time was the number of months between the baseline and the event of CRC.

General characteristics of subjects, according to presence of colorectal cancer. Unit: N, (%).

Difference in development of CRC according to diagnosis of UC 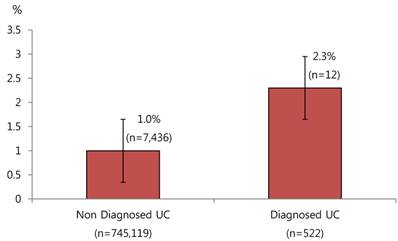 Kaplan-Meier curve of subjects by gender over 10 years, according to presence of ulcerative colitis 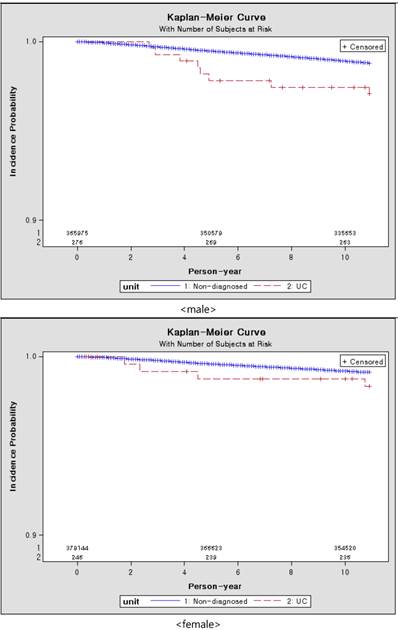 CRC most frequently results from mutations in the Wnt signaling pathways that increases signaling activity. The mutations occur in the intestinal crypt stem cell.[16] The risk factors of CRC include male gender, increasing age, high intake of fat, alcohol or red meat, obesity, income, smoking, a lack of physical exercise, and family history of CRC.[17-19] The UC is associated with development of CRC.[5-7, 19, 20] The difference in result of analyses was explained by different methodology, target populations and follow-up period.

Some epidemiologic studies have shown a higher risk of CRC in male than in female. This difference in risk of CRC between genders is not easily explained.[19] Increasing age is associated with an increased risk of CRC.[18] Socio-demographic indicators, such as income and residence might partially explain the increased incidence of CRC.[17, 23] Furthermore, the HR of CRC of the highest income level is significantly higher than that of lowest income level. Regional differences in screening also might affect detection of CRC. Risk factors associated with incidence of CRC are diagnoses of hypertension and diabetes mellitus.[18, 24] Finding from this study revealed that patients with hypertension or diabetes mellitus might be more likely to be diagnosed as CRC than healthy people without hypertension or diabetes mellitus.

The source used in analysis was population-based representative data containing all medical claims and checkup results of population from 2002 to 2013. A number of studies have been carried out to identify the cause of disease utilizing accumulated data via electronic data interchange (EDI) in Korea.

This study had the following limitations. First, data based on claims data included only information on each episode of health care utilization and expenditure. Claim data used in analysis did not include clinical findings and disease severity. The variables used in this study were limited. Also, important co-variates associated with risk of CRC in UC are not available for the cohort thus limiting the value of the findings. The factors that influenced association between UC and CRC were age at initial diagnosis, life style, and family history of CRC.[32-34] Second, follow-up period was short (11 years), which might have precluded the detection of significant effects of UC on subsequent incidence of CRC. The incidence of CRC begins to increase 8 or 10 years after the initial diagnosis of UC.[19, 30, 35]

In conclusion, the cancer caused financial and psychological burden to the caregiver, as well as pain of patients. CRC is a disease attributable to inappropriate behavior patterns and lifestyle. Prevention is the best cure for cancer. To reduce the incidence of CRC in patients with UC, it is important to identify predictive and protective factors for CRC. Developing cancer prevention strategies might be helpful in containing the incidence of cancer to selected high-risk groups.

The study was supported by the grant of the Institute of Health Insurance & Clinical Research of NHIMC.