Background; Approximately 60% of patients with colorectal cancer develop liver metastasis at some point after diagnosis. The aim of this study is to investigate whether the evaluation of ICGR15 preoperatively is a useful clinical indicator of hepatic injury following chemotherapy and to investigate the influence of multiple chemotherapies on liver function.

Conclusions; Because the pathological diagnosis is usually established only after operation, preoperative evaluation such as the identification of sinusoidal injury is difficult. Based on this study, higher ICGR15 values may provide an indication of surgical complications and be a predictor of liver dysfunction following frequent cycles of chemotherapy. Hepatectomy should be performed with the utmost care in such patients, and the number of cycles of preoperative chemotherapy should probably be as low as possible.

Colon cancer is the third most common cancer worldwide [1-3]. Approximately 14%-25% of patients with colorectal cancer have liver metastasis at presentation, and up to 60% of patients develop metastasis at some point after diagnosis [4-7]. Surgical resection is widely accepted as the only potentially curative treatment for colorectal liver metastasis (CRLM), and it is also the only treatment offering long-term survival [8]. Curative resection of liver metastases achieves a 5-year survival rate of 25%-40% [9-15]. This progress can be attributed to the improvements in surgical techniques, perioperative care, and the emergence of more effective chemotherapy regimens. Neoadjuvant chemotherapy (NAC) is increasingly being used, especially among patients with advanced CRLM. NAC has allowed many previously unresectable tumors to be treated and converted/downsized to make surgery possible. Moreover, NAC for patients with resectable disease is also frequently being used [16, 17]. Adam et al. reported a 30% increase in the 5-year survival rate among patients who underwent hepatectomy after an objective tumor response vs. patients who showed tumor progression while receiving NAC [18]. Thus, the application of NAC for CRLM is likely to increase.

Indocyanine green (ICG) is a water-soluble, anionic compound that mainly binds to plasma proteins after intravenous administration. It is selectively taken up by the hepatocytes and excreted unchanged into the bile [19]. The ICG retention rate at 15 min (ICGR15) has been reported to be effective for preoperative evaluation of hepatic functional reserve [19-23]. Makuuchi's criteria for estimating the extent of hepatectomy have often been applied in Japan; they are based on the values of ICGR15, serum levels of total bilirubin, and existence of ascites, and are suitable indicators for hepatectomy in liver tumors [20, 23].

The aims of this study are to investigate whether the evaluation of ICGR15 preoperatively is a useful clinical indicator of hepatic injury following chemotherapy and to investigate the influence of multiple chemotherapies on liver function.

From January 2001 to April 2015, 102 consecutive patients underwent hepatic resection for CRLM in our department. Of them, 92 patients who had undergone hepatectomy for the first time were enrolled and the remaining 10 patients with multiple hepatectomies were excluded. Patients characteristics are showed in Table 1. ICG examination was performed in all patients. CRLM was diagnosed using abdominal ultrasonography, dynamic computed tomography (CT) scans, and magnetic resonance imaging (MRI).

Patients were treated with a number of chemotherapy regimens (Table 2). Briefly, the regimens were divided into five types as follows, with the regimens overlapping for each patient: no treatment (31 cases), oral agents (24 cases), FOLFOX-based (34 cases), FOLFILI-based (11 cases), and other chemotherapies (10 cases). In this study, oral chemotherapeutic agents were not included in systemic chemotherapy.

Data are presented as number and median ± standard deviation.

Almost all enrolled patients received colorectal resection and adjuvant or neoadjuvant chemotherapy in another hospital, after which they consulted our department regarding hepatectomy for CRLM. Therefore, the indication for chemotherapy was not standardized for all patients. Some specialists in our department discussed and decided on resectability. The type of hepatic resection was based on the results of preoperative diagnostic imaging, intraoperative ultrasonography, and careful attention to liver function. Major hepatectomy was defined as excision of two or more liver segments.

The comparison of Mean ICG value in each category. 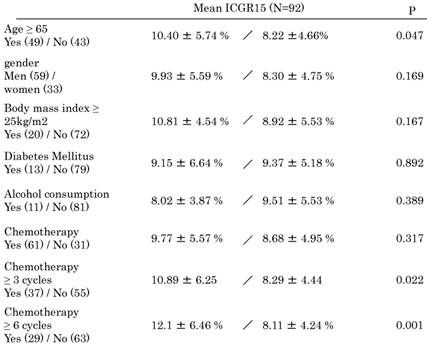 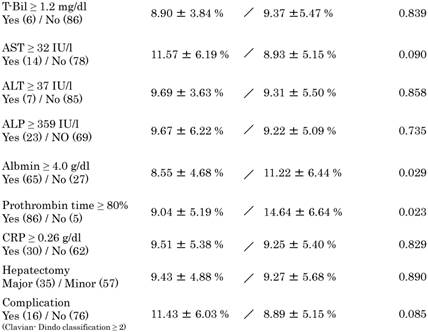 Hepatic resection was performed under intraoperative ultrasound guidance with or without inflow occlusion (Pringle's maneuver). Parenchymal transection was performed using an ultrasonic dissector with bipolar electric cautery. All portal veins in the Glisson's capsule >1 mm in diameter were ligated whenever possible using 2-0 or 3-0 braided silk sutures or a vessel clip. The exposed structures were dissected using a tissue sealer. Tests to detect intraoperative bile leakage were routinely performed, and when bile leakage sites were detected on the cut liver surface, these were repaired using 4-0 or 5-0 monofilament synthetic absorbable sutures.

Surgical complications were evaluated by the Clavien-Dindo classification [24], and a score higher than grade II was defined as a postoperative complication.

Comparison of mean ICG15 values in each category

Clinical characteristics of patients receiving systemic chemotherapy for ≥6 cycles vs. <6 cycles and for ≥3 cycles vs. <3 cycles

The use of preoperative chemotherapy for CRLM is increasing worldwide. However, it remains unclear how many chemotherapy cycles induce liver dysfunction. Although there are some reports on postoperative pathological evaluations following frequent chemotherapies [19, 25, 26], no preoperative indicators for liver injury have been identified yet.

With regard to maximum size of tumor diameter and the number of tumors, there were no differences between ≥6 cycles and <6 cycles, ≥3 cycles and <3 cycles of chemotherapy. (Tables 4). This is because chemotherapy was performed at other hospitals; hence, the criteria for chemotherapy were not standardized initially.

Because the pathological diagnosis is usually established only after operation, preoperative evaluation such as the identification of sinusoidal injury is difficult. Based on this study, higher ICGR15 values, which are technically easy to measure preoperatively, may provide an indication of surgical complications and be a predictor of liver dysfunction following frequent cycles of chemotherapy; hepatectomy should be performed with the utmost care in such patients, and the number of cycles of preoperative chemotherapy should probably be as low as possible.

24. Dindo D, Demartines N, Clavien PA. Classification of surgical complications: a new proposal with evaluation in a cohort of 6336 patients and results of a survey. Ann Surg. 2004;240:205-13