Pancreatic cancer (PC) is an aggressive malignancy with a 5-year survival rate < 6% [1]. Despite recent advances in the diagnosis, surgery and chemotherapy of PC, the prognosis of PC patients remains poor. At an advanced stage, 80-85% of PC patients are diagnosed when surgical resection is not feasible [2]. Therefore, understanding the molecular events underlying the development and progression of pancreatic cancer is urgently imperative to the development of novel therapeutic strategies.

Recent studies indicate that epithelial-mesenchymal transition (EMT), a developmental process in which cells lose epithelial characteristics and acquire mesenchymal properties such as increased motility and invasion, can endow cells with stem-cell like characteristics. Hh signaling functions in the development and homeostasis of many organs and tissues. Aberrant activation of Hh signaling is associated with multifarious human tumors where the pathway is implicated in tumorigenesis, malignancy, metastasis and cancer stem cells [8]. Previous studies have shown that the activation of Hh pathway was a critical event in the tumorigenesis of pancreatic cancer [9,10].

In this study we aimed to assess the role of Hh signaling in the regulation of EMT, stemness properties and chemoresistance of pancreatic CSCs. We isolated human pancreatic Panc-1 tumorspheres and employed recombinant lentiviral vectors for the delivery of siRNA to knockdown SMO. We examined the expression of CSC and EMT markers and evaluated the malignant behaviors of Panc-1 CSCs in vitro and in vivo using nude mouse lung metastasis model.

The RNAi targeting the human SMO gene (GenBank accession no.NM_005631.4) and the negative control sequence were designed and constructed by Invitrogen (Shanghai, China). The sequences of two different oligos targeting SMO were as follows: si-1 TGCTGTACACGATGACAAAGATGATGGTTTTGGCCACTGACTGACCATCATCTGTCATCGTGTA and CCTGTACACGATGACAGATGATGGTCAGTCAGTGGCCAAAACCATCATCTTTGTCATCGTGTAC; si-2 TGCTGTGTGCATGCTGAAGGACAGCTGTTTTGGCCACTGACTGACAGCTGTCCCAGCATGCACA and CCTGTGTGCATGCTGGGACAGCTGTCAGTCAGTGGCCAAAACAGCTGTCCTTCAGCATGCACAC. pcDNA6.2™-GW/EmGFP-miR vector was purchased from Invitrogen. miRNAs were synthesized and cloned into pcDNA6.2™-GW/EmGFP-miR, then transferred into lentiviral plasmid pLenti6.3/V5-DEST with the Gateway recombination technology. Lentiviruses were produced by the transfection of 293T cells with miRNA or negative control plasmid using packaging Mix (Invitrogen). Subconfluent cells were infected with lentivirus at a multiplicity of infection of 50 in the presence of 8 ug/ml polybrene (Sigma Aldrich). Panc-1 cells with stable silencing of SMO were selected with 10 ug/ml of Blasticidin for 4 weeks.

Lentiviral harbouring luciferase reporter gene was generated using pBJ-luciferase, psPAX2 and pMD2.G (Addgene) in 293T packaging cells. Panc-1-NC and Panc-1-si cells were seeded in 6-well plates and transfected using the Lipofectamine system according to the manufacturer's protocol when cells achieved about 50% confluence. Cells were selected with 1 ug/ml of puromycin for 2 weeks.

To detect the expression of cancer stem cell markers, the following antibodies were used: anti-CD44-PE, anti-CD24-APC, anti-ESA-PE-Vio770, IgG1-PE, IgG1-APC, IgG1-PE-Vio770 (Miltenyi). Cells were harvested with trypsin-EDTA to produce a single cell suspension. The cells were pelleted by centrifugation, washed twice with PBS and incubated with the antibody for 10 min in the dark at 4℃. The respective isotype control antibodies were used at the same concentrations according to the manufacturer's instructions. After washing twice with PBS, samples were resuspended in 500 μl PBS and analyzed on a flow cytometer (FACSAriaII, USA). Cells were routinely sorted twice, and the cells were reanalyzed for the purity, which typically was >97%. Data were analyzed with BD FACS Diva software.

The cells were plated at a density of 2,000 cells/well in 96-well plates. After exposure to the drug for 72 h, WST-8 reagent from Cell Counting kit-8 was added (10 µl/well), incubated for 2 h, and optical absorbance at 450 nm and 630 nm were measured using a microplate reader. OD values of all experimental groups were normalised to control group. Inhibition rate = (1 - absorbance of treated cells/control cells) x 100%.

Cells were plated in six-well ultralow attachment plates (Corning Inc.) at a density of 2,000 cells/ml in serum-free DMEM:F12 (Gibco) supplemented with 20 ng/ml EGF (PeproTech), 100 ng/ml bFGF (PeproTech), 1:50 B27 supplement (Gibco), 100 U/ml penicillin, and 100 µg/ml streptomycin at 37℃ in a humidified 5% CO2 atmosphere. After 7 days of incubation, spheres were typically >75 mm. 7-day-old spheres were harvested using 40 mm cell strainers, dissociated to single cells with trypsin-EDTA, and then grown for 7 days. Differentiation was induced by culturing tumorsphere-derived cells in DMEM supplemented with 10% FBS.

Cells (2.0x104 cells/well) in DMEM were seeded into the upper chamber of a Transwell insert (Corning), which was precoated with the Matrigel Matrix (Corning). The lower chamber was filled with DMEM supplemented with 10% of FBS as the chemoattractant. The cells were then cultured for 24 h. The cell number was counted under a Fluorescence Inversion Microscope. Three independent experiments were performed.

Eight weeks later, all mice were sacrificed, and tumors were excised. A portion of the tumor tissue was collected, fixed in 4% paraform, and embedded in paraffin for hematoxylin and eosin (H&E) staining to assess tumor pathology. All the animal studies were reviewed and approved by Ethics Committee for Animal Studies at the Peking University, China.

Four-week-old nude mice (BALB/c-nu) were maintained in a barrier facility on high efficiency particulate air-filtered racks and fed by breeders from the Department of Laboratory Animal Science, Peking University Health Science Center. Single cells suspensions (5×105 in a total volume of 100 ul of PBS) were injected into the lateral tail vein of nude mice. 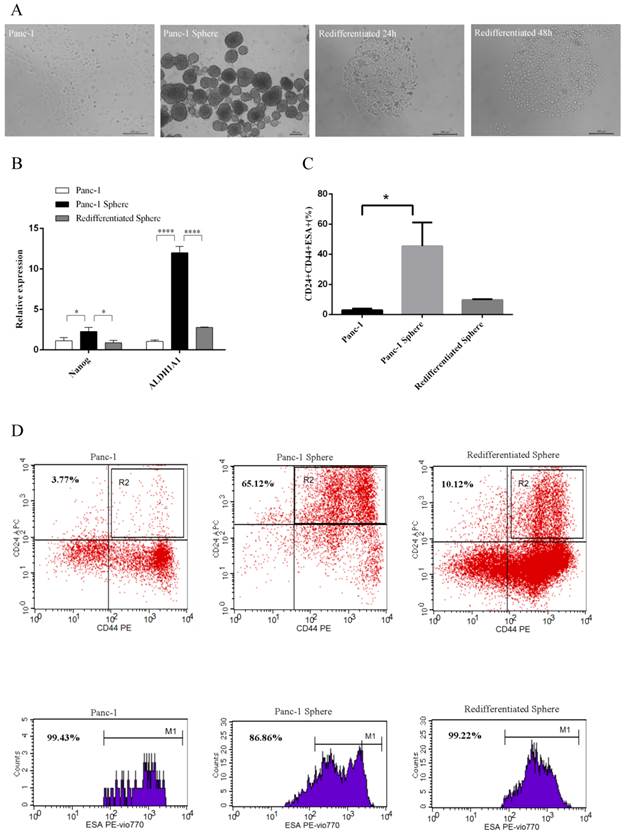 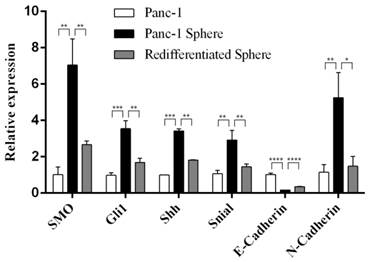 Next we used Fluoresence-activated cell sorting (FACS) to acquire the relatively pure CD24+CD44+ESA+ Panc-1-si CSCs from Panc-1-si tumorspheres. Real-time RT-PCR and Western blot analysis confirmed that SMO expression was significantly downregulated in Panc-1-si CSCs (Fig. 4D-F). As expected, the expression of CSCs markers ALDH1A1 and Nanog was significantly downregulated in Panc-1-si CSCs (Fig. 4D-F). Furthermore, SMO knockdown in the CSCs resulted in the downregulation of epithelial marker E-cadherin and upregulation of mesenchymal markers Snail and N-cadherin at mRNA and protein levels (Fig. 4D-F). Taken together, these results suggest that SMO is critical for the acquisition of EMT characteristics of CSCs.

To explore the potential role of Hh signaling in the invasive capacity of pancreatic CSCs, we employed two different siRNAs to knockdown SMO and performed Transwell invasion assay. We found that the number of Panc-1-si CSCs that migrated through the upper chamber of the Costar wells was less than that of Panc-1-NC CSCs (Fig. 5A), indicating that SMO knockdown inhibits the invasion capacity of CSCs. 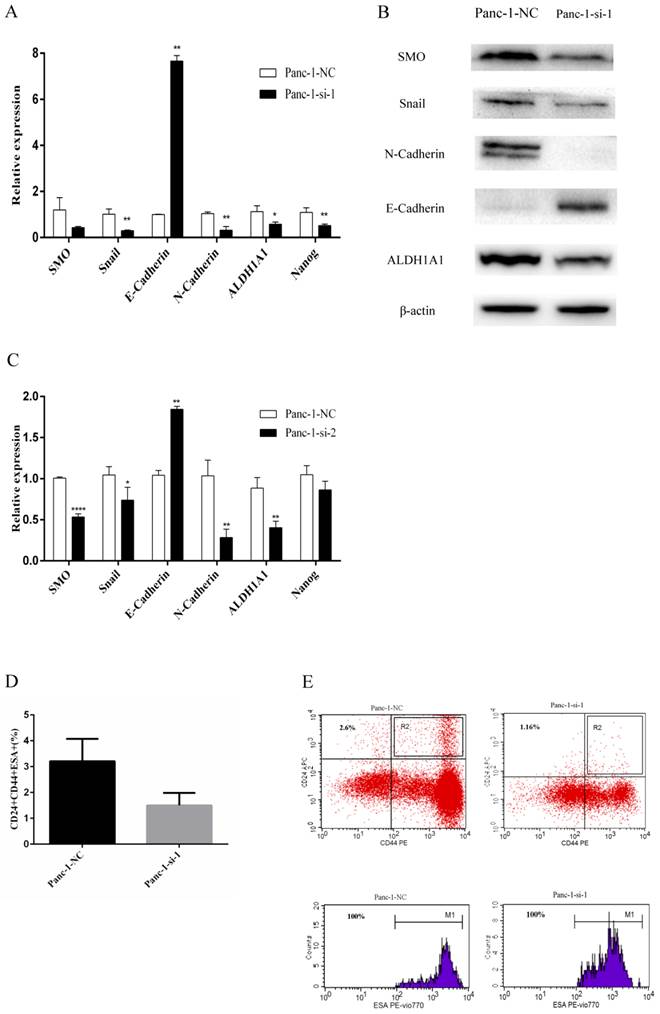 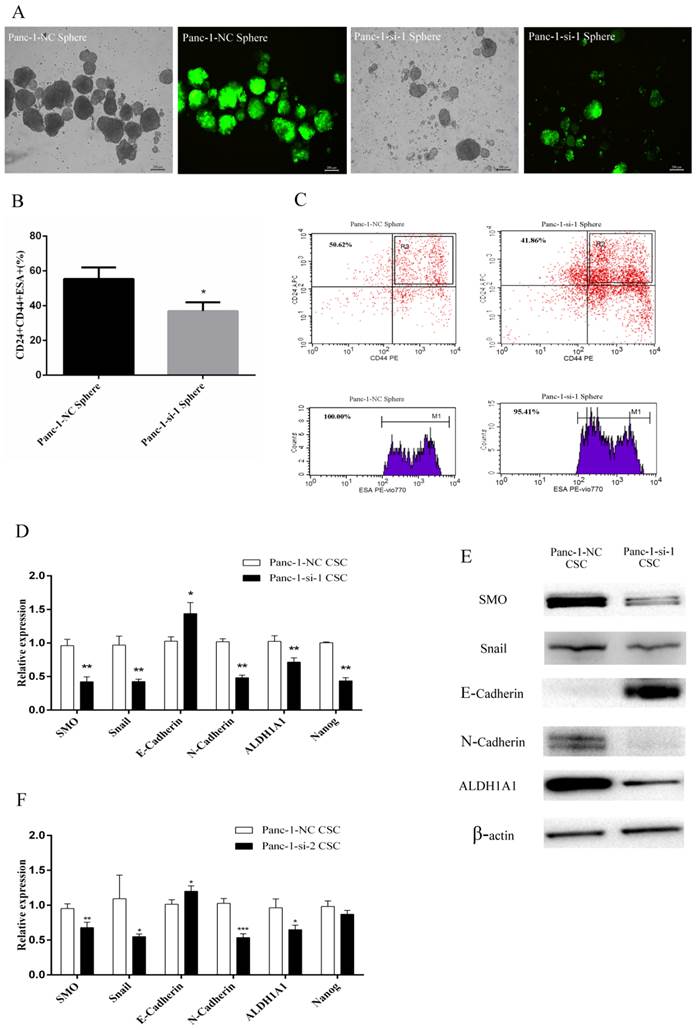 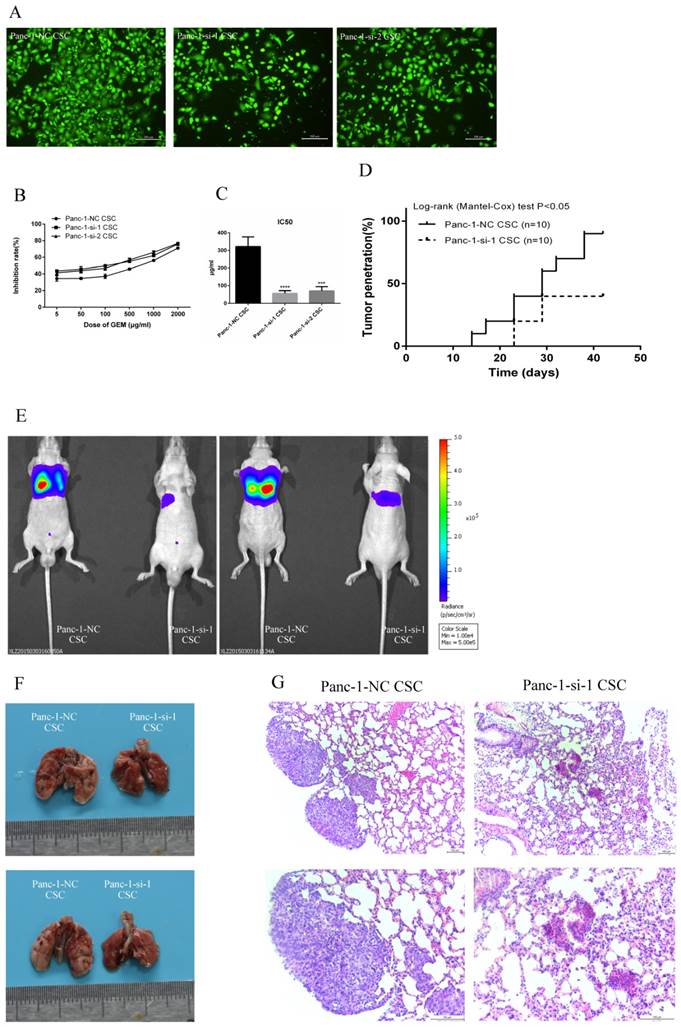 Accumulating data indicate the existence of tumor-initiating or cancer stem cells in human pancreatic tumor that possess the capacity to self-renew and differentiate into bulk tumor cells. However, the molecular mechanisms that drive the enhanced tumorigenic potential and stem-like behavior of tumor-initiating cells are poorly understood. In this study, we provide evidence that SMO plays a vital and previously unrecognized role in the maintenance of stem-like cells isolated from human pancreatic cancer cells.

Currently, CSCs from pancreatic cancer are identified based on cell surface antigens such as CD44, CD24, epithelial-specific antigen (ESA) and CD133 [11]. There are still controversies to use which types of markers to enrich pancreatic CSCs. However, cell populations enriched for high ALDH1A1 activity were shown to be sufficient for efficient tumor-initiation with enhanced tumorigenic potential [12]. Therefore, in the present study we chose CD24CD44ESA as the surface markers of pancreatic CSCs, and the expression of ALDH1A1 and Nanog as the markers of cancer stem cell-like properties of pancreatic CSCs.

Serum-free floating culture system is an ordinary technique used to isolate CSCs from several cancer types such as brain, breast and colon cancers [13-15]. Panc-1 is a common pancreatic adenocarcinoma cell line used for the study of CSCs [16-18]. In our study, compared to control Panc-1, SMO, Snail, N-Cadherin, ALDH1A1 and Nanog were highly expressed in Panc-1 tumorsphere with decreased expression of E-cadherin and increased CD24+CD44ESA+ cell population. After the induction of differentiation, the expression levels of SMO, Snail, N-Cadherin, E-cadherin and the CD24+CD44ESA+ cell population were similar to Panc-1. Taken together, Panc-1 tumorspheres display the potentials of self-renewal and differentiation, which are the characteristics of CSCs. Morel et al. claimed that EMT process could stimulate the stem-like capability of human breast cancer cells [19]. In this study, compared with the highly differentiated CD44-/CD24+cells, the stem cell-like CD44+/CD24- cells had high expression of EMT-inducing transcription factor Snail and mesenchyme cell marker [20]. These data suggest that Hh signaling and EMT process are active in Panc-1 tumorspheres.

Hh signaling has been associated with the self-renewal process of CSCs [21]. Previous study demonstrated that Hh signaling receptor SMO was highly expressed in normal human mammary stem/progenitor cells and implicated in malignant human mammary stem cells [22]. In our study, SMO knockdown resulted in the down-regulation of ALDH1A1 and Nanog and the reduction of CD24+CD44+ESA+ cell population, and reduced the size of the tumorsphere. Therefore, SMO plays a vital role in the regulation of pancreatic cancer stem cell properties and the maintenance of the self-renewal of pancreatic CSCs.

EMT is a vital process in which malignant tumor cells stem from the epithelium to obtain the capability of migration and invasion, including pancreatic tumor [23]. In this study we investigated the role of Hh signaling in EMT of pancreatic CSCs. We found that SMO knockdown resulted in declined invasion capability of Panc-1 CSCs in vitro. SMO knockdown also caused the decreases in the incidence of subcutaneous tumorigenesis and pulmonary metastasis in vivo. These data demonstrate that SMO could regulate EMT process in human pancreatic CSCs and subsequently impact the capability of invasion and migration of pancreatic CSCs.

Furthermore, EMT is implicated in the drug resistance of pancreatic tumor. Li et al. found that gemcitabine-sensitive PC cells showed strong expression of epithelial marker E-cadherin while gemcitabine-resistant PC cells exhibited strong expression of mesenchymal makers at mRNA and protein levels [24]. In addition, chemoradiation-resistant pancreatic cancer cells exhibited the properties similar to CSCs and also underwent EMT, suggesting that chemoradiation resistance-induced EMT is associated to the generation of pancreatic CSCs [25]. Thus, we wondered whether SMO could regulate the chemoresistance of pancreatic CSCs. We found that Panc-1-NC CSCs were more resistant to gemcitabine compared to Panc-1-si CSCs. These results indicate that pancreatic CSCs demonstrate declined capacity of chemoresistance with a decreased expression of SMO. We proposed that Hh signaling is implicated in the chemoresistance of pancreatic cancer by regulating EMT process of CSCs. Further studies in stem-like tumorspheres derived from other pancreatic cancer cell lines such as MiaPaCa-2 and L3.6pl are needed to confirm our conclusion.

In conclusion, we demonstrate that tumorspheres derived from pancreatic cancer cell line Panc-1 possess self-renewal, differentiation and stemness properties. Panc-1 tumorspheres underwent EMT and exhibited activated Hh signaling. The inhibition of Hh signaling by SMO knockdown represents an effective method to inhibit the self-renewal, EMT, invasion, chemoresistance, tumorigenesis and pulmonary metastasis of pancreatic CSCs. These data suggest that targeted therapy against Hh signaling may be beneficial in the treatment of pancreatic cancer.

This work was supported by the grants from National Natural Science Foundation of China (Grant No. 81172184 and 81372605) and Beijing Natural Science Foundation (No. 7122188, 7142162). We thank Prof. Zebin Mao at the Department of Biochemistry and Molecular Biology in Health Science Center, Peking University for the assistance and technical support.