The association between RFC1 G80A polymorphism and cancer susceptibility: Evidence from 33 studies

Cancer, one of the leading causes of death all around the world, is a result of multiple environmental and genetic risk factors, as well as gene-environment interactions. According to the cancer statistics, approximately1658370 new cancer may occur in USA in 2015 [1]. Although substantial resources have been dedicated to cancer research, cancer is still a huge threat to human. It is well known that both environmental and hereditary factors play critical roles in the initiation and progression of cancer [2]. Among genetic factors, genetic mutation and epigenetic change such as DNA methylation can lead to carcinogenesis [3]. One-carbon metabolism is closely related to DNA methylation, in which folate, a member of water-soluble B vitamins family [4], plays an important role [5, 6]. Folate is an essential material in cell proliferation and tissue regeneration [7, 8], which cannot be synthesized in the mammalian cell, and must be obtained from extracellular environment to support one-carbon transfer biosynthetic reactions [9]. Folate deficiency can result in DNA hypomethylation and gene instability and subsequently induce disease by changing gene expression and increasing DNA impairment. Studies have shown that folate metabolism dysfunction are implicated in a variety of diseases, such as neuroblastoma [10], breast cancer [11], non-Hodgkin lymphoma [12, 13], and neural tube defect [14]. Given the crucial role of folate, its transporters including folate receptors (FRs), proton-coupled folate transporter (PCFT) and reduced folate carrier (RFC) are of great importance to the maintenance of hemostasis humans [15].

The PubMed and EMBASE were searched thoroughly without any language restriction to seek potential studies. The following keywords were used for literature search: “RFC, reduced folate carrier gene, rs1051266, RFC1 G80A, or SLC19A1”, “polymorphism, variant, or variation”, and “cancer, neoplasm, or carcinoma”. Additionally, literature was searched by manually screening the reference lists of the eligible studies and reviews. The last search was performed on March 31, 2015.

All genotypes frequency of RFC1 G80A polymorphism was calculated and chi-square test was employed to assess the Hardy-Weinberg Equilibrium (HWE) in control subjects for every study. The association between RFC1 G80A polymorphism and cancer risk was assessed by calculating pooled odds ratio (OR) and 95% confidence interval (CI) under the five genetic models: comparisons of allele frequencies, homozygous, heterozygous, dominant, and recessive models. All the statistical tests were two-sided and the result with P<0.05 was regarded as a statistically significant. Q value and I2 were used to evaluate the between-study heterogeneity in the heterogeneity test. The random effects model were hired to calculate the pooled OR and 95% CI when I2>50%. Otherwise, the fixed effect model was adopted. Moreover, subgroup analyses were performed according to ethnicity and cancer type. Subsequently, the sensitivity analysis was performed by successively removing one study at a time to recalculate OR and 95% CI. Publication bias was assessed by funnel plots and Egger's linear regression test. If the funnel plots were asymmetry or P<0.1, publication bias was considered significant. All the results above were performed by STATA 12.0 (STATA Corporation, College Station, TX).

Flow chart of the study selection and inclusion process. 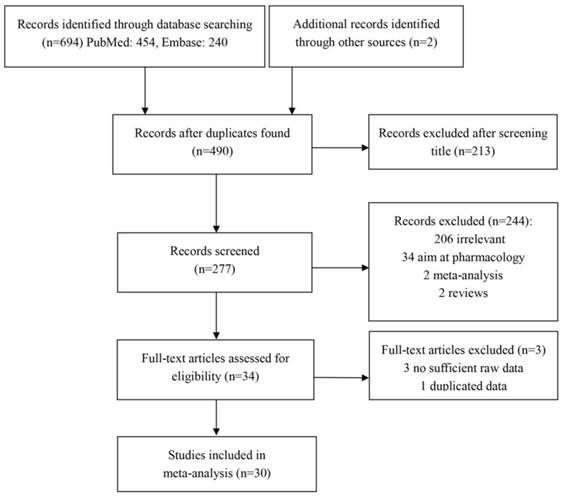 Forest plot of solid cancer risk related with RFC1 G80A polymorphism stratified by ethnicity in allele model (A vs. G) 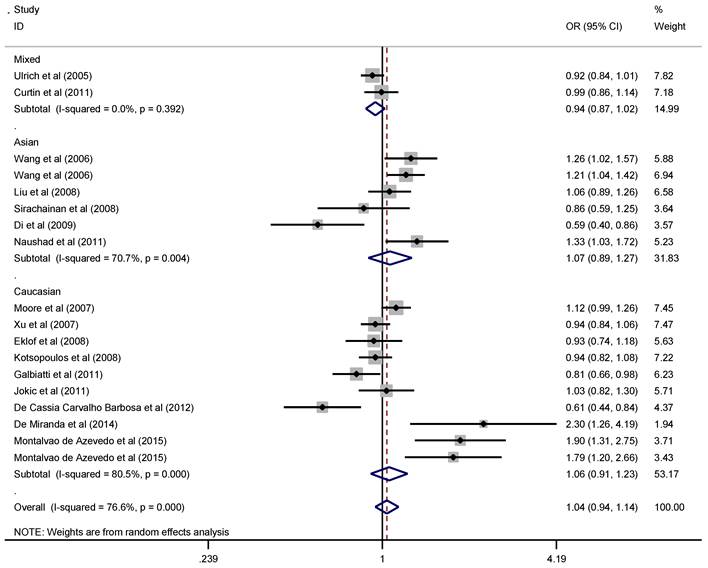 Forest plot of hematological malignance risk related with RFC1 G80A polymorphism stratified by ethnicity in allele model (A vs. G) 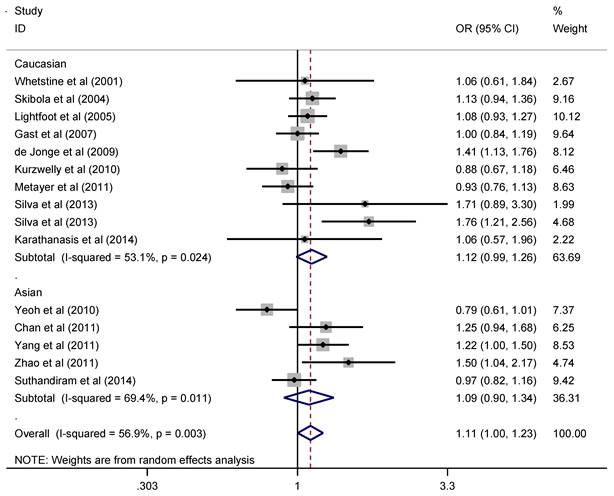 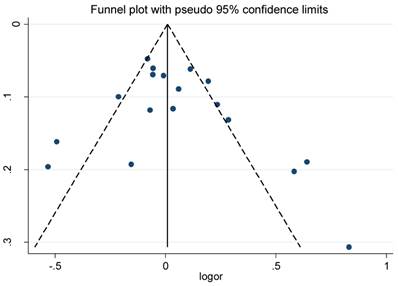 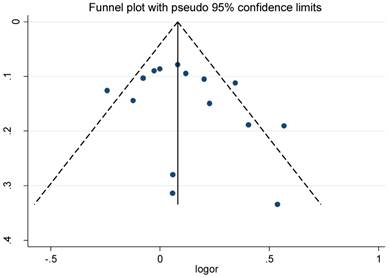 RFC is a typical facilitative transmembrane protein delivering 5-methyltetrahydrofolate from plasma into cells. The dysfunction of RFC has been shown to be related to several disease such as neural tube defects [33], congenital heart defect [34], Alzheimer's Disease [35] and homocysteinemia [36]. Moreover, RFC is also responsible for transporting Methotrexate from extracellular fluid into intracellular fluid, which is an effective treatment for rheumatoid arthritis and acute lymphoblastic leukemia. Although RFC1 G80A polymorphism, leading to a histidine-to-arginine substitution at position 27 of the RFC protein, was first identified in as early as 2000 [36], the effect of this alteration is not fully clarified. Chango et al. [36] indicated that individuals carrying AA genotype had higher plasma folate levels than those carrying GG genotype. Recently, increasing evidences have highlighted the importance of RFC1 G80A polymorphism in the pathogenesis of malignance [37-39].

Despite the interesting results in our meta-analysis, several limitations of the current study should be acknowledged. First, this meta-analysis only included published studies so that potential publication bias might not be avoided. Second, the influence of a single genetic variant on tumorigenesis is complicated by the gene-gene or gene-environment, which may lead to an unmeasurable deviation while evaluating the relationship between RFC1 G80A polymorphism and cancer risk in this meta-analysis. Third, we performed this meta-analysis with crude ORs since studies included in this meta-analysis lacked sufficient data for adjustment for confounding factors, which might affect the stability of our results. Last, random effect model were used in some genetic models, which might present unstable results. Therefore, validation for our findings from large, well-designed studies is needed in the future.

This work was supported by the National Natural Scientific Foundation of China (No. 81172077).