Gastric cancer (GC) still keeps up high mortality worldwide with poor prognosis. Efficient and non-invasive prognostic biomarkers are urgently needed. MicroRNAs are non-coding RNAs playing roles in post-transcriptional gene regulation, which contribute to various biological processes such as development, differentiation and carcinogenesis. MicroRNA expression profiles have been associated with the prognosis and outcome in GC. MicroRNA prognostic biomarkers have been identified from blood or tissues samples, but with different prognostic features. Understanding the various roles of microRNAs in different sample sources of GC will provide deep insights into GC progression. In this review, we highlight the distinct prognostic roles of microRNAs biomarkers in blood and tissue according to their relationships with prognostic parameters, survival rates and target pathways. This will be useful for non-invasive biomarker development and selection in prognosis of GC.

Gastric cancer (GC) or stomach cancer (SC) is highly heterogeneous in histological pattern, biological behavior, outcome and biomarkers. It is the fourth common cancer and the second major contributor to cancer mortality worldwide [1, 2]. Although the incidence and mortality of GC declined in the last decades because of the improvement in surgical and adjuvant multimodal treatment approaches, the overall prognosis for advanced GC remains poor and the 5-year survival rate for advanced GC is still low between 10% and 25% [3, 4]. New prognostic biomarkers for GC are extremely needed.

MicroRNAs are small non-coding RNAs (18-25 nucleotides) and changes in the abundance of them reveal promising prognostic associations with major cancer outcome such as clinicopathological features and survival rates. Many works have demonstrated that microRNAs could be as potential biomarkers in different diseases, such as prostate cancer, clear cell renal cell carcinoma, sepsis, gastric cancer and so on [5-8]. In GC, several reports have reviewed the microRNAs as biomarkers for GC from different perspectives. Shrestha et al. and Wang et al. focused on the systematic summarizing microRNA expression profile from 6 studies and 14 studies in gastric cancer tissues, respectively [9, 10]. Li and her colleagues overviewed the epigenetic biomarkers including DNA methylation, histone modification and microRNAs in gastrointestinal cancers [11]. Another review also summarized the epigenetic biomarkers, DNA methylation and microRNAs, but only paid attention to their function as diagnostic markers in body fluids [12]. A meta-analysis was performed on circulating microRNAs in 22 studies and concluded that miR-21 can be a biomarker for detection of GC with AUC = 0.91 and Q = 0.8466 [13]. Most of the comprehensive reviews summarized the microRNAs function and the role of microRNAs as markers for GC diagnosis, prognosis or therapeutic response [14-20]. But the different prognostic roles of microRNAs in blood and tissues remain poorly understood, which is much more important to the understanding of the clinical roles of these microRNAs in different sample sources.

In this review, we give an elaborate comparison of microRNAs as prognostic biomarkers in blood and tissues. MicroRNA biomarkers in tissues indicate the samples from tissues of patients while microRNA biomarkers in blood indicate the samples from serum, plasma, or blood. We selected the studies by the search criteria “(gastric cancer OR stomach cancer) AND (biomarker* OR marker*) AND (prognos*) AND (microRNA OR miRNA)” from PubMed. We considered only the researches which take the expression of microRNAs as prognostic biomarkers. Since we compared the prognostic features of microRNAs in human blood and tissues, articles about microRNA biomarkers in other body fluid such as gastric juice and other animal samples were excluded. Altogether, as prognostic markers, 14 microRNAs in blood and 36 microRNAs in tissues from 45 studies were compared according to their association with clinicopathological features of GC and survival analysis (See Tables 1 and 2). We also summarized the validated targets of given microRNAs in GC by searching databases, such as, TarBase [21], miR2Disease [22], and miRTarBase [23]. In each database, we just considered the terms which studied gastric cancer of Homo sapiens. In TarBase, the terms with prediction score larger than 0.8 were included. In miRTarBase, we only selected the reports based on 'strong evidence'. This review provides complementary to the previous reviews and essential information that will help discover non-invasive biomarkers in prognosis of GC.

Association between clinicopathological features and microRNA biomarkers. MicroRNAs in red and green denote the up-regulated and down-regulated expression in GC. MicroRNAs in black denote that the microRNAs were differentially expressed between two-sample groups other than GC patient and healthy controls, e.g. between recurrence and non-recurrence groups. microRNAs marked with underline present the microRNAs could be prognostic markers both in tissues and blood. 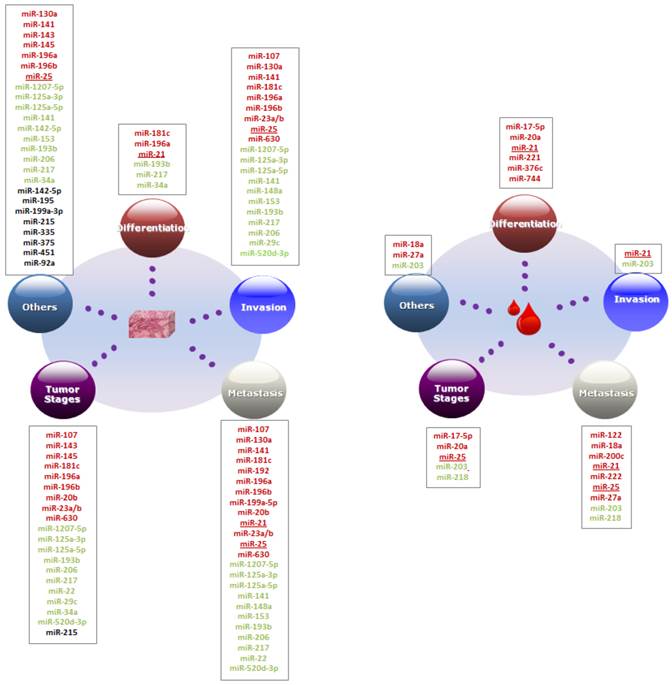 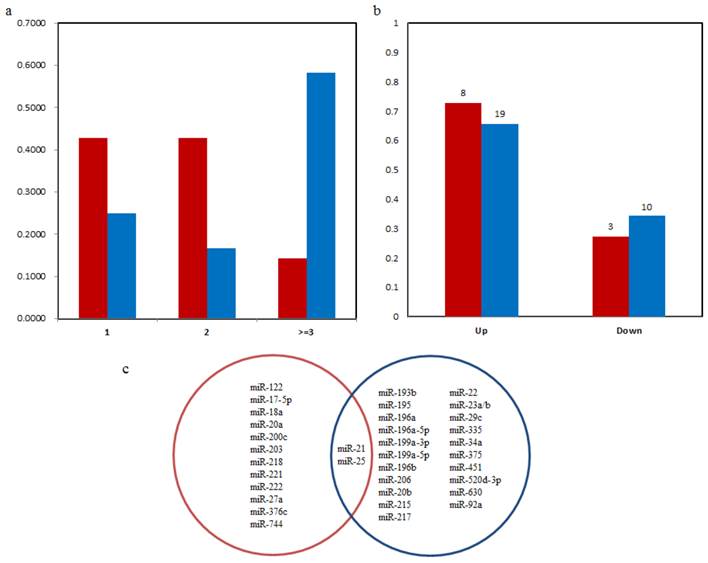 GC invasion is a process when tumor cells invade the tumor nearby tissues and vasculature. It is an elementary factor that affects patient survival rate and the most important step of tumor cells dissemination and metastasis in different types of cancer [37-39]. Zhao et al. had reviewed the role of microRNAs in the GC invasion and metastasis [39]. Some of the microRNAs could be as prognostic biomarkers. miR-107, for example, is a potential prognostic biomarker in tissue and inhibits the GC cells invasion by directly targeting the cyclin-dependent kinase 6 (CDK6) [40, 41]. In tissue, expression levels of miR-181c, miR-630 and co-expression of miR-23a and miR-23b were strongly associated with invasion depth [32, 42, 43]. Increased miR-196a/b expression was significantly correlated with serosal, vascular, lymphatic and depth of invasion but in another study miR-196a doesn't have such significantly association with depth of invasion one-way analysis of variance [35, 44] . High expression of miR-130a and miR-25 promoted the migration, invasion and proliferation of gastric cancer cells by targeting RUNX3 and FBXW7, respectively [45, 46].

Decreased expression of eight microRNAs were associated with different types of invasion, e.g. miR-125-3p/-5p and miR-520d-3p with depth of invasion [47-49], miR-148a with organ invasion and peritoneal invasion [50], miR-29c and miR-206 with venous invasion [51, 52]. Patients with down-regulated miR-1207- 5p had more lymphovascular invasion [53]. Down regulation of miR-141 promoted cell proliferation, invasion and migration in AGS GC cell lines [54]. Suppression of miR-153 also promoted GC cell migration and invasion by inhibiting SNAI1-induced epithelial-mesenchymal transition (EMT) [55]. In blood, however, only two microRNAs miR-21 and miR-203 in blood was associated with invasion [26, 28].

Metastasis, a complex and multi-step process, is a primary clinicopathological feature of advanced GC. In metastasis, cancer cells migrate from the primary neoplasm to a distant location and proliferate to form anther macroscopic tumors [56, 57]. However, the mechanisms that regulate metastasis remain poorly understood.

In tissues, lymph node metastasis (LNM) was significantly related with higher expression of miR-107, miR-181c, miR-196a/b, miR-20b, miR-23a/b, miR-25 and miR-630 [32, 41-44, 46, 58, 59]. Increased miR-196a/b, miR-20b and miR-630 expression were also more detected in GC with distant metastasis. miR-196a/b simulates cell metastasis through direct negative regulation of radixin in GC [42, 44]. High-level of miR-199a-5p expression could promote cell metastasis in GC cells since suppression of miR-199a-5p decreased the metastatic ability in GC cells in vitro and in vivo [60]. Moreover, there are controversial results about miR-196a, -215 and -192. As mentioned above, miR-196a was reported significantly up-regulated in distance metastasis [44] and correlated with lymph node metastasis [58] while no such correlation was found in the subsequent study.[35] . Chiang et al. found there were no significant difference in the expression levels of these miR-215 and -192 between GC tissue and non-tumor tissue and both of them were decreased in the GC cell lines [61]. But Xu and Fan found that miR-215 and -192 levels were increased in GC tissue and related with lymph node metastasis [62].

With regard to down-regulated microRNAs in GC tissues, reduced expression of miR-125-3p, miR-153, miR-206, miR-22 and miR-520d-3p were strongly correlated with lymph node metastasis [48, 49, 51, 55]. MiR-1207-5p was significantly down-regulated in samples with LNM compared with those without LNM [53]. Additionally, expression levels of miR-125-3p, miR-5p, miR-148a and miR-22 were associated with distance metastasis, especially the correlation between liver metastasis and miR-125-3p/-5p [47, 48, 50, 51]. miR-217 was significantly down-regulated in patients with liver metastasis and lung metastasis and promoted tumor progression and metastasis in vivo experiment [36]. miR-148a inhabits the GC cell metastasis by reducing the mRNA and protein levels of ROCK1 in GC [63]. miR-141expression level was found to be decreased in primary tumors that subsequently metastasized compared with those that did not metastasize [54].

The TNM (tumor-node-metastasis) classification is a widely used cancer staging systems based on the size and extension of the primary tumor (T), nearby lymph nodes involvement (N), and the presence of or otherwise of distant metastatic spread (M). Recently, the seventh edition of the TNM classification was published which introduced many changes for gastric cancer, especially the N stage reclassification [71, 72].

Beyond the above four main clinicopathological features, microRNA biomarkers are also related with other clinicopathological features, such as GC histological classification, recurrence, tumor growth, tumor size, etc. miR-143 and miR-145 were associated with scirrhous type histology [73, 74]. miR-196a was more frequently detected in diffuse and infiltrative GC subtype [44]. Brenner et al. found that miR-451, -199a-3p and -195 expression were increased in GC patients with recurrence than patients without recurrence after all the patients received tumor resected surgery [75]. Zhang and colleagues identified that miR-375 and miR-142-5p were differentially expressed between recurrence groups and non-recurrence groups and the combination of these two microRNAs could recognize the above groups both in the training and test samples as a classifier [76]. Recently, high expression level of miR-335 was also detected in high recurrence groups and it was involved in several oncogenic pathways such as TP53, TGF-β and Wnt [77]. Improving miR-90a expression promoted tumor growth in vitro and in vivo [78].

To further explore different functions of the above microRNA biomarkers in tissue and blood, we performed enrichment analysis of their target genes by Ingenuity Pathways Analysis (IPA®). The targets of microRNAs were collected from experimentally validated database miRecords [79], TarBase [21], miR2Disease [22], and miRTarBase [23] or predicted by computational software tools HOCTAR [80], ExprTargetDB [81], and starBase [82] as reported in our previous research [5]. For the 36 microRNA biomarkers in GC tissue, 3735 target genes were predicted and 199 pathways were significantly enriched by their targets (p < 0.01). 2093 targets were predicted for 14 microRNA biomarkers in blood and significantly enriched in 134 pathways (p < 0.01). More than half of the enriched pathways by targets of microRNAs in tissue and in blood are overlapped, as see in Figure 3 (a). As shown in Table 3 and Figure 3 (b) and (c), the top 10 significantly enriched pathways by the targets of the given microRNAs in blood and tissue were listed. Among the top 10 enriched pathways, four of them are same as molecular mechanisms of cancer, p53 signaling, chronic myeloid leukemia signaling and Wnt/β-catenin Signaling. In the case of tissue, several in the top ten pathways are related with epithelial cell or tissue such as regulation of the epithelial-mesenchymal transition pathway [83], epithelial adherens junction signaling and germ cell-sertoli cell junction signaling. The function is different for the top 10 pathways that enriched by target genes of blood based microRNA markers. There are not so many pathways related to epithelial cell or tissue, but most of them play important roles in GC such as AMPK signaling, which was reported to induce apoptosis through the mitochondrial apoptotic pathway [84, 85], Wnt signaling, the one is well-known for promoting the development of hematoendothelial cell [86-89], and IGF-1 Signaling which induces epithelial-mesenchymal transition in gastric cancer [90, 91].

The overlapped pathways are marked by underline. The ratio is the percentage of the mapped genes divided by the number of total genes in the pathway. 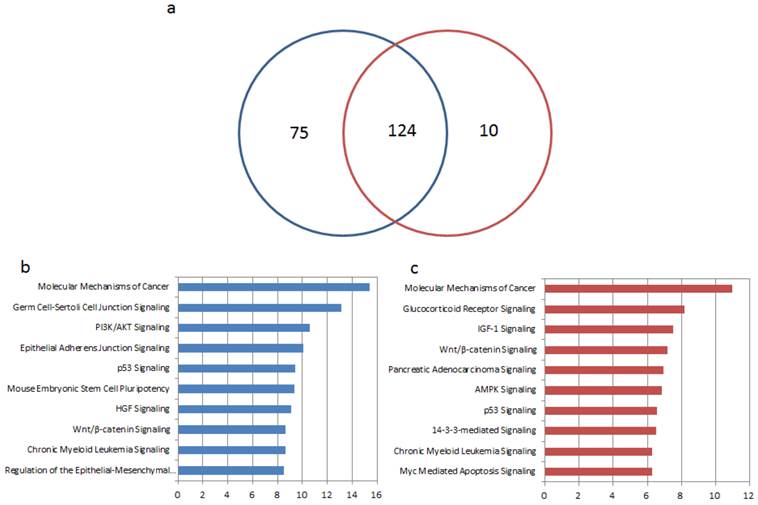 Gastric cancer with a very poor prognosis remains to account for considerable amount of morbidity and mortality in the world. MicroRNAs in blood are promising biomarkers since they are non-invasive and could have a possible clinical application in GC. As well-known that GC is heterogeneous and personalized, the understanding of the roles of microRNAs in GC progression needs further exploration at systems biological level [96-98].