Zinc-fingers and homeoboxes 1 (ZHX1) was implicated in the carcinogenesis of human cancers. However, little is known about the role of ZHX1 in gastric cancer (GC). Here, we found that ZHX1 was downregulated in GC tissues compared with paired non-tumor tissues and loss of ZHX1 expression correlated with aggressive clinical characteristics of GC patients. ZHX1 induced G1/S arrest by decreasing cyclin D1 and cyclin E expression, and induced cell apoptosis by Bcl2 downregulation and Bax and cleaved Caspase-3 upregulation. Our findings revealed that ZHX1 could inhibit cell growth through inducing cell-cycle arrest and apoptosis in GC.

Gastric cancer (GC) is one of the most common malignancies and a major health burden worldwide, with an estimated 951,600 new cases and 723,100 related deaths in 2012 [1]. Despite great improvements in diagnosis and treatment, the prognosis of patients with advanced GC is still generally poor [2]. The carcinogenesis of GC is a complex multistep procession mediated by epigenetic and genetic alterations of oncogenes and tumor suppressor genes, but the underlying molecular mechanisms are still elusive. Furthermore, the currently available biomarkers fail to effectively predict early-stage GC. Therefore, a better understanding of the molecular processes that drive GC could help identify sensitive and specific biomarkers to predict GC in early stage.

Zinc-fingers and homeoboxes protein 1 (ZHX1) is a member of the small ZHX family, which also includes ZHX2 and ZHX3 [3-5]. The ZHX family members contain two C2H2 zinc-finger (Znf) motifs and four to five homeodomains, and belong to the Znf class of homeodomain transcription factors. Recently, the role of ZHX family in human cancers has been the subject of much attention. ZHX2 was reported to be a tumor suppressor in hepatocellular carcinoma (HCC) [6, 7] and Hodgkin lymphoma [8, 9], and low expression of ZHX2 predicted poor prognosis in multiple myeloma [10]. ZHX1 was generally downregulated in HCC tissues and overexpression of ZHX1 could inhibit the growth of SMMC-7721 cells [11]. These studies suggested that the ZHX family may be involved in the carcinogenesis of human cancers.

ZHX1 consists of 873 amino acid residues and contains a nuclear localization signal (NLS) at the C-terminal [12]. ZHX1 can form homodimers or heterodimers with NF-YA [13], BS69 [14], and DNMT3B [15]. ZHX1 functions as a novel transcription repressor; however, its downstream target genes and the DNA-binding sequence have not yet been identified. We previously reported that miR-199a-3p can promote the progression of GC by directly targeting ZHX1 [16]. However, little is known about the exact role of ZHX1 in GC.

In this study, we investigated the expression pattern of ZHX1 in GC tissues by immunohistochemistry and its relationship to clinicopathological features. In addition, we further examined the biological function of ZHX1 in GC cell lines.

GC tissues and paired non-tumor tissues were obtained from 112 patients undergoing radical gastrectomy at Ruijin Hospital, Shanghai Jiao Tong University School of Medicine between December 2011 and July 2013. None of the patients received chemotherapy or radiotherapy prior to surgery. All tissues were embedded into a tissue microarray. This study was approved by the Ethics Committee of Ruijin Hospital and all patients provided written informed consent.

Immnunohistochemistry staining was performed according to the previously described protocol [17]. We used a rabbit polyclonal ZHX1 antibody (1:100; Abcam, USA). The tissue sections were independently evaluated and scored by two pathologists who were blinded to the clinical information of the subjects. Nuclear staining of cells was considered to be positive immunostaining. The intensity of ZHX1 nuclear staining was graded as 0 (no staining), 1 (weak staining), 2 (moderate staining), or 3 (high staining). The proportion of positive cells was scored as follows: 0 (0%), 1 (1-25%), 2 (26-50%), 3 (51-75%), or 4 (76-100%). The final immunohistochemistry staining score of each tissue sample was calculated by multiplying the staining intensity by proportion of positive cells; the total expression of ZHX1 was determined as negative expression (0-3) or positive expression (4-12).

The shRNA sequence designed to target ZHX1 was 5′-TCAGACCATAACTGTTATT-3′ and the negative control sequence was 5′-TCTCCGAACGTGTCACGT-3′. The oligoduplexes were cloned into the GV248 vector (Genechem, Shanghai, China). The shRNAs were transfected into SGC-7901 cells using Lipofectamine 2000. Stable transfectants were selected by culturing with 2 μg/mL puromycin for 3 weeks.

Cell proliferation was evaluated by Cell Counting Kit-8 assay (Dojindo, Kumamoto, Japan) according to the manufacturer's instructions. Briefly, cells were seeded into 96-well plates at 1.5 × 103 per well and incubated for 0 h, 24 h, 48 h, 72 h, and 96 h. Then, 10 μL of CCK-8 solution was added into the wells and after 3 h, the plates were examined using a spectrophotometer. Five replicate wells were tested per assay, and all experiments were performed in triplicate.

For cell-cycle analysis, cells were fixed in 75% cold ethanol and stored at 4°C overnight. The next day, the fixed cells were washed with phosphate-buffered saline twice, treated with RNase A, and stained with propidium iodide (PI) for 30 min at room temperature in the dark. Cell-cycle distribution was analyzed by flow cytometry (FACSCalibur, Becton Dickinson, MD, USA).

Apoptotic cells were detected using the Annexin V-FITC Apoptosis Detection kit (BD Pharmingen) according to the manufacturer's instructions. Briefly, the cells (3×105) were harvested and stained with 3 μL Annexin V-FITC and 5 μL PI for 15 min in the dark. Cells were immediately analyzed by flow cytometry.

For cell migration assay, 200 μL serum-free RPMI-1640 containing 1×105 cells was added into the upper chamber of 8-um pore transwells (Corning, Lowell, MA, USA). The lower chamber contained 600 μL RPMI-1640 with 10% FBS as a chemoattractant. The chambers were incubated for another 24 h at 37°C, and then cells were fixed by 10% formalin for 30 min and stained with 0.5% crystal violet for 15 min. Finally, cells attached to the filter were quantified by inverted microscopy.

Stable transfectants (2×106 in 100 μL of sterilized phosphate-buffered saline) were injected subcutaneously into the dorsal flank of 4-week-old male BALB/c nude mice (five mice per group). Tumor nodules were measured every week with a caliper and the tumor volumes were calculated using the following formula: V=tumor length × tumor width 2/2. After 35 days, all mice were sacrificed and the tumors were excised, weighed, embedded in paraffin, and examined histologically. Mice received humane care and the experimental protocols were approved by the Institutional Animal Care and Use Committee of the Shanghai Jiao Tong University.

All statistical analyses were performed by IBM SPSS Statistical software (version 18.0). Correlation between ZHX1 nuclear staining and clinicopathological features was analyzed using Pearson's Chi-square (χ) test. Student's t test or one-way analysis of variance was used for statistical analysis when appropriate. A two-tailed value of P < 0.05 was considered to be statistically significant.

Expression and distribution of ZHX1 in GC tissues

We further investigated the correlation between the expression of nuclear ZHX1 in GC tissues and clinicopathological features using Pearson's Chi-square (χ) test. As shown in Table 2, loss of nuclear ZHX1 expression was significantly correlated with large tumor size (P=0.037), poor differentiation (P=0.023), advanced TNM stage (P=0.008), and deep invasion depth (P=0.016), but not correlated with age (P=0.722), sex (P=0.449), location (P=0.612), and lymph node metastasis (P=0.269). Thus, these findings suggest that loss of ZHX1 is likely to be involved in the carcinogenesis of GC.

Establishment of sable transfectants and localization of transfected ZHX1

The protein and mRNA expression levels of ZHX1 were evaluated in seven GC cell lines by western blot and qRT-PCR (Figure 2A). Among the seven GC cell lines, NCI-N87 and SGC-7901 cell lines displayed the lowest and highest endogenous ZHX1 levels, respectively. Thus, we chose NCI-N87 cells for overexpression experiments and SGC-7901 cells for knockdown experiments. We established a stable ZHX1 upregulated NCI-N87 cell clone and a ZHX1 downregulated SGC-7901 cell clone. Changes in ZHX1 levels were confirmed by qRT-PCR and western blotting analysis (Figure 2B).

We next performed fluorescence microscopy to evaluate the subcellular localization of ectopically expressed ZHX1 protein in NCI-N87 cells. Transfection of cells with a plasmid encoding a ZHX1-GFP fusion protein revealed that green fluorescent signal was detected only in the nuclei. In comparison, green fluorescence was observed throughout the cells transfected with the pEGFP-C1 plasmid that only expresses GFP protein (Figure 2C). These findings confirmed that ZHX1 protein is localized in the nuclei. 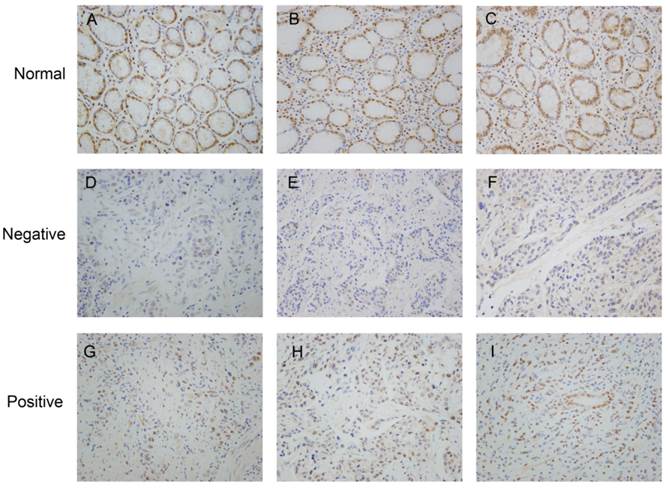 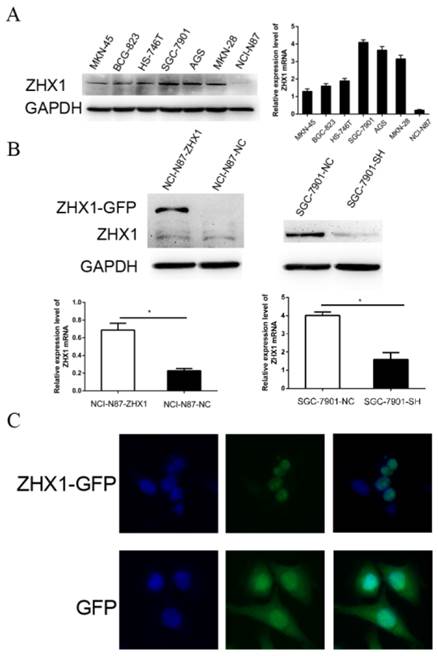 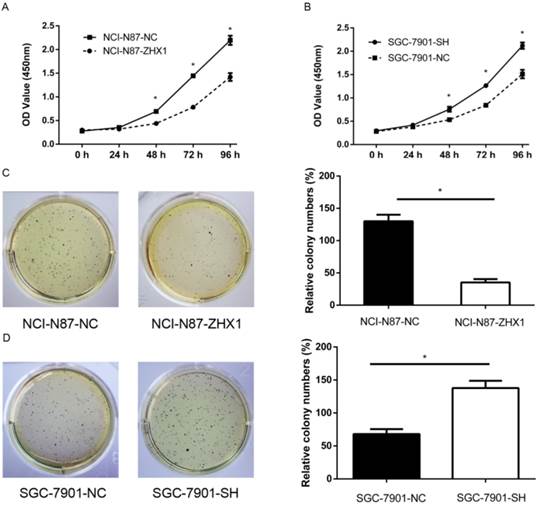 We further examined whether ZHX1 can inhibit tumorigenicity in vivo. The stable transfectants were injected subcutaneously into the dorsal flanks of nude mice. All nude mice developed tumor nodules at the injected site, and tumor formation was monitored and analyzed by growth curves (Figure 6A, B, P < 0.05). The results indicated that ectopic expression of ZHX1 could significantly suppress the tumor growth in vivo. Thirty-five days later, the mice were euthanized and the xenograft tumors were photographed (Figure 6C and 6D).

Immunohistochemistry analysis of Ki-67 antigen revealed that the percentage of Ki-67 antigen-positive cells was remarkably reduced in the tumors from mice implanted with NCI-N87-ZHX1 group cells than those with NCI-N87-NC cells (Figure 6E; P < 0.05). The percentage of Ki-67 antigen-positive cells in tumors from mice implanted with SGC-7901 cells was higher than the control group (Figure 6F; P < 0.05). These data suggested that the reduced tumor growth in mice may be partly from the lower proliferation induced by ZHX1 expression. 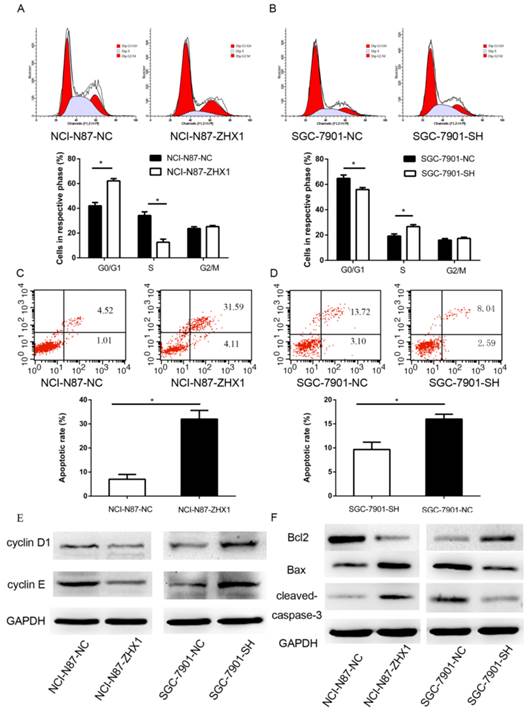 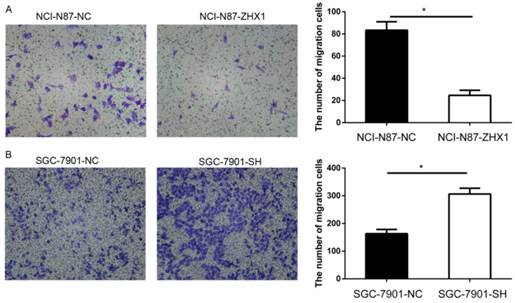 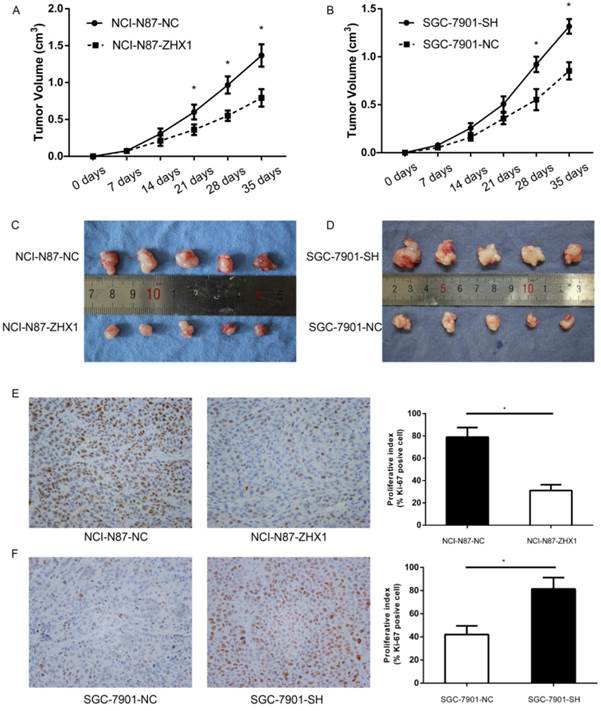 To elucidate the potential functions of ZHX1 in GC cell lines, we established a stable ZHX1 upregulated NCI-N87 cell clone and a ZHX1 downregulated SGC-7901 cell clone. Cell growth was inhibited in cells upregulated for ZHX1 expression, as measured by CCK-8 assay, soft agar colony formation, and the nude mouse xenograft model. Reduction in endogenous ZHX1 level in SGC-7901 cells enhanced the cell growth in vitro and in vivo. Several studies have demonstrated that ZHX1 may play a pivotal role in cell growth and differentiation. Wang et al. [11] found that ectopic expression of ZHX1 in HCC cell lines resulted in inhibition of cell proliferation. In the current study, our results revealed that ZHX1 inhibits GC cell proliferation in vitro and in vivo. In addition, we found that ZHX1 could impair the migratory capacity of GC cell lines, which implicates that loss of ZHX1 expression in GC may facilitate metastasis.

Abnormal regulation of cell-cycle processes is a fundamental aspect of cancer cells [18]. The G1/S transition is essential for cell proliferation and its dysfunction could contribute to the carcinogenesis of many human cancers [19]. ZHX1 can interact with the activation domain of the A subunit of nuclear factor Y (NF-YA). NF-Y is a trimeric transcriptional factor that comprises NF-YA, NF-YB, and NF-YC, and plays an important role in cell-cycle progression [20, 21]. ZHX2, another member of the ZHX family, can induce cell-cycle arrest by repressing expression of cyclins A and E [7]. However, the detailed molecular mechanism underlying how ZHX1 regulates the cell cycle is not clear, and more investigations should be performed. We observed that overexpression of ZHX1 can block the cell cycle at G0/G1 phase by decreasing the expression of cyclins D1 and E, and reduction of ZHX1 has the opposite effect. Moreover, we found that ZHX1 could induce cell apoptosis, which was associated with downregulation of anti-apoptotic protein Bcl2 and upregulation of apoptotic protein Bax and cleaved caspase-3. Apoptosis is a programmed cell death precisely regulated in normal cells. The imbalance of apoptosis and cell proliferation is a crucial event in tumor pathogenesis. Cancer cells can suppress apoptosis through a variety of molecular mechanisms, promoting the tumor progression [22]. Taken together, our findings suggest that ZHX1 plays a tumor suppressive role in GC cell lines and inhibits cell growth through inducing apoptosis and cell-cycle G1/S arrest.

In summary, we demonstrate, for the first time, that the expression of nuclear ZHX1 is downregulated in GC tissues and that ZHX1 can inhibit cell growth through inducing cell-cycle G1/S arrest and apoptosis. Thus, ZHX1 may functions as a tumor suppressor in GC. Further studies are warranted to clarify the detail of the molecular mechanism underlying these biological phenomena.

10. Armellini A, Sarasquete ME, Garcia-Sanz R, Chillon MC, Balanzategui A, Alcoceba M. et al. Low expression of ZHX2, but not RCBTB2 or RAN, is associated with poor outcome in multiple myeloma. British journal of haematology. 2008;141:212-5