Identification of Regulatory-RNAs for Alternative Splicing of Ron Proto-Oncogene

School of Life Sciences, Gwangju Institute of Science and Technology, Gwangju 500-712, Korea.
1These authors contributed equally to this manuscript.

Pre-mRNA splicing is required for gene expression in higher eukaryotes. In this process, introns in pre-mRNA are removed and exons are ligated to produce mRNA. Pre-mRNA splicing occurs in a large RNA-protein complex called spliceosome, composed of U snRNP and more than 250 proteins [1]. 5' splice-site, 3' splice-site, branch-point and polypyrimidine tract sequences are required for pre-mRNA splicing. Alternative splicing is a process that can produce various mature mRNAs encoding different proteins with different function or even opposite functions from a single gene. More than 95% of human genes are able to be alternatively produced. Alternative splicing increases protein diversity and is elaborately regulated. The regulation of alternative splicing occurs in two directions. Firstly, RNA sequences in exons or introns play important regulatory roles [2]. Secondly, proteins promote or inhibit alternative exon splicing to regulate alternative splicing [3]. These proteins can function by either contacting or not contacting RNA sequences.

RON receptor tyrosine kinase is a proto-oncogene that induces cell migration and matrix invasion [4]. RON is a produced from 180-kDa precursor through proteolysis. Ron is a heterodimeric protein, composed of a 40-kDa extracellular α chain and 150-kDa transmembrane β chain that has intrinsic protein tyrosine kinase activity [5]. Macrophage-stimulating protein (MSP) activates RON by autophosphorylation and upregulating RON kinase activity. In tumor cells, RON activation induces invasive growth and motility [6]. Alternative splicing of Ron pre-mRNA produces different isoforms to be produced. A well-known isoform is RONΔ165, which is produced by exclusion of exon 11 in alternative splicing [7]. RONΔ165 is not proteolysed, thus a single chain polypeptides are accumulated [7]. RONΔ165 is constantly activated without stimulating. Alternative splicing of exon 11 has been mostly studied by my group and Biamonti's group. It has been demonstrated that SRSF1, SRSF2, hnRNP A1 interact with exon 11 or exon 12 to stimulate exon 11 inclusion/exclusion [8-10]. SRSF1 and hnRNP A1 were also shown that regulate cell invasion through regulating exon 11 splicing [8, 9].

Another Ron isoform is RONΔ160, which is produced by exclusion of exon 5 and 6 that encodes the first IPT domain in the extracellular β chain. RONΔ160 promotes cell migration, matrix invasion and protection from apoptosis [11]. Increased RONΔ160 expression has been demonstrated to induce cellular transformation in vitro and metastasis in vivo [12]. These oncogenic properties have been shown to be caused by abnormal accumulation of ß-catenin and target gene expression such as c-myc and cyclin D [13].

We initiated this experiment to produce Ron minigenes that include exon 4 through exon 7. We decided to include the 3' splice site at upstream end of exon 4, and the 5' splice site at downstream end of exon 7. To clone the genomic DNA into pcDNA 3.1(+) plasmid, we first used a primer that basepairs with the upstream end of exon 4 and also includes a BamHI cleavage sequence at immediate upstream from the 3' splice site of exon 4, and the other primer that basepairs with the downstream end of exon 7 and also contains a XhoI cleavage sequence at immediate downstream from the 5' splice site of exon 7 (BX minigene, figure 1A). To produce another minigene, whereas the same upstream primer that was used in BX minigene was applied, the downstream primer includes EcoRI cleavase sequence instead of XhoI cleavage sequence (BE minigene, figure 1A). BX and BE minigenes have the same contexts except the sequences downstream from 5' splice site of exon 7. To analyze the effects of XhoI and BamHI cleavage sequences on splicing of Ron exon 5 and 6, we extracted RNA from minigene transfected cells and performed RT-PCR using primer pairs that basepair with exon 4 and vector sequences. As shown in figure 1B, in addition to producing exon 5 and 6 included (E5E6/in), exon 5 included (E5/in) isoform, BX minigene also produces only intron 4 spliced (I4/ex), partial cryptic splice site activated (I5/p/ex) [14] and intron 4 and 6 spliced (I4I6/ex) isoforms (lane 2). However, BE minigene demonstrated different splicing pattern. The results in figure 1B show that, in addition to all of the isoforms produced by BX minigene, an isoform in that both exon 5 and 6 excluded is also produced (E5E6/ex, lane 3). Moreover, I5/p/ex and E5E6/in isoforms are reduced. Furthermore, the results also show that E5/in isoform was increased in a significant level as compared with BX minigene. The results in figure 1 indicate that RNA sequences from EcoRI cleavage site play regulatory roles for alternative splicing of exon 5 and 6 in Ron pre-mRNA.

We next asked if intact exon 4 or 7 is required for the regulatory effects of the RNA sequences from restriction enzyme cleavage sites. To address this question, we constructed minigenes in which exon 4 or exon 7 is not intact. In detail, we used primers that basepair with 30 nt downstream from the 5' end of exon 4 and and includes BamHI cleavage sites, and another primer that basepair with 33 nt downstream from the 3' end of exon 7 and contains XhoI cleavage sites (figure 2A). To differentiate this minigene from BX minigene, this shorter minigene constructed was named as BX/S. Strikingly, BX/S minigene (figure 2B, lane 2) produced much different splicing isoforms compared with BX minigene (figure 1B, lane 2). As shown in the figure 2B, E5E6/ex isoform was produced, a significant increase of E5/in isoform, and the decrease of I5/p/ex and E5E6/in isoforms were observed. These results demonstrate that RNA sequences at the end of exon 4 and 7 play regulatory roles in alternative splicing of exon 5 and 6 in Ron pre-mRNA.

We further asked whether RNA sequences from different restriction enzyme cleavage sites regulate Ron splicing in the shorter exon 4 and 7 contexts. To this end, we produced EX/s and KB/s minigenes, in which EcoRI and XhoI cleavage sequences, or KpnI and BamHI cleavage sequences were applied independently (figure 3A). Using BX/S minigene as a control, we compared splicing event of EX/s and KB/s minigenes. Although an increase of E5E6/ex isoform was detected in KB/S minigene, significant alteration in splicing pattern was not observed (figure 3B). Therefore, we conclude that the restriction enzyme sequences do not play critical regulatory roles when the ends of exon 4 and 7 are absent. 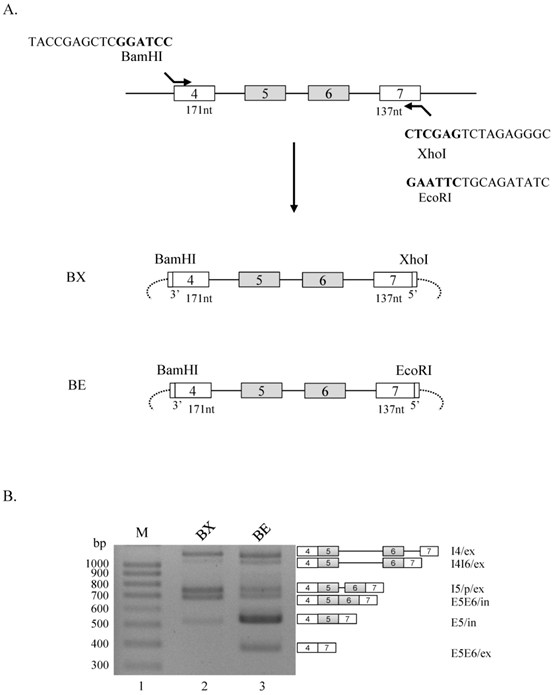 RNA sequences at the end of exon 4 and 7 play regulatory roles in Ron alternative splicing. (A) Strategy of producing BX/S minigene. Exon 4 and 7 length, and the lengths incorporated into the minigene are shown with number of nucleotides (nt). (B) RT-PCR analysis of BX/S minigene is shown. Isoforms and their names are shown at right panel. 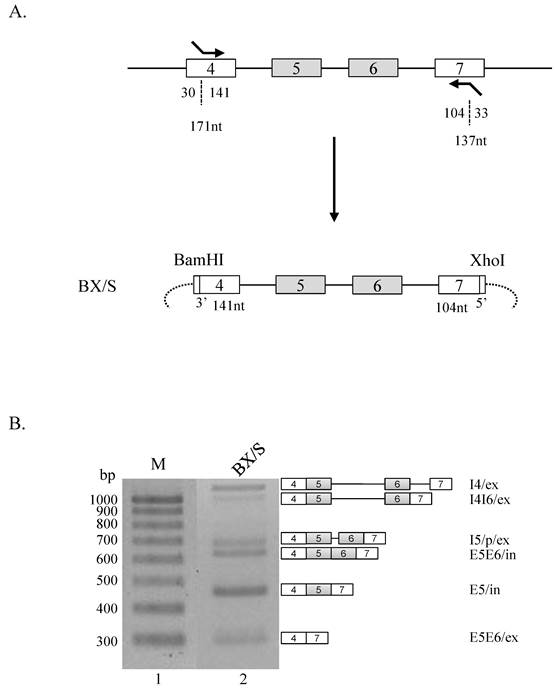 RNA sequences from restriction enzyme cleavage sites do not play regulatory roles without the RNA sequences of the ends in exon 4 and 7. (A) Strategy to making EX/S and KB/S is shown. (B) RT-PCR analysis of EX/S and KB/S minigenes are shown. 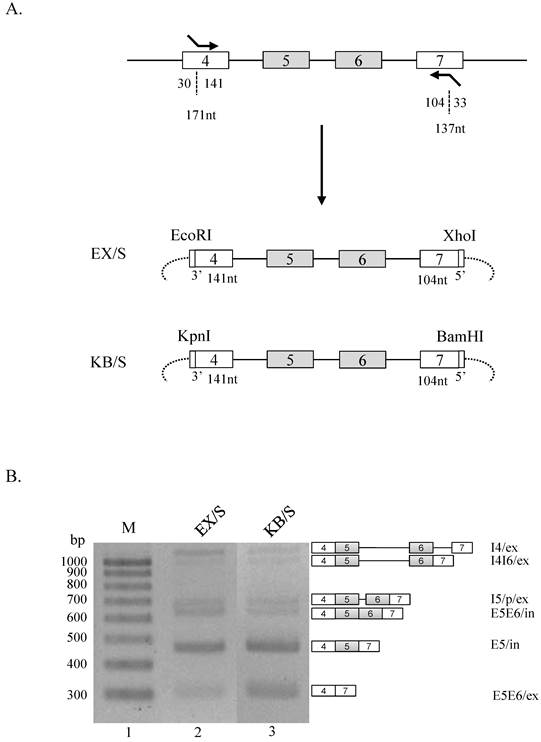 MDA MB 231 cells were grown in RPMI 1640 media supplemented with 10% FBS at 37°C and 5% CO2. Polyethyleneimide (PEI) (Sigma) was used for transfection of Ron minigene plasmids into cells as previously described. Briefly, 0.5 ㎍of minigene was mixed with 1 ug PEI and added to cell. After 4 h transfection, media was changed with fresh media. The cells were incubated for 48 h before total RNA extraction.