Pancreatic cancer (PC) is one of the most common cancers and has a poor prognosis due to late diagnosis and ineffective therapeutic multimodality. MicroRNAs (miRNAs, miRs) are a group of non-coding, small RNAs with active biological activities. In our investigation, human pancreatic cancer cell line Capan-2 were transfected with miR-222 mimics, inhibitors or their negative controls. Cell proliferation was assessed by Cell Counting Kit-8 (CCK-8), EdU incorporation assay and cell cycle determination by flow cytometry. MiR-222 and putative target gene expression levels including p27, p57 and PTEN were determined using quantitative reverse transcription polymerase chain reactions and Western blotting. Our results showed that miR-222 could lead to increased vitality and proliferative rate of Capan-2 cells, and also higher S-phase and lower G1-phase of cell cycle. Further, we found p57 at protein level, but not p27 nor PTEN, was regulated by miR-222 in Capan-2 cells. Finally, we co-transfected miR-222 inhibitor and p57 si-RNA into Capan-2 cells, and found that proliferation-suppressing effects of miR-222 inhibitor on Capan-2 cells could be partially reversed by silencing p57. Our results indicate that miR-222 controls Capan-2 cell proliferation by targeting p57. This study provides a novel idea for developing effective therapeutic strategy for PC patients through inhibiting miR-222.

Pancreatic cancer (PC) is among cancers with worst prognosis and is also a leading cause of death caused by cancer in the United States. In addition, in other developed countries, PC is responsible for over 20% of deaths due to gastrointestinal malignancies [1]. Although recent diagnostic and therapeutic advances have greatly improved the survival of patients with PC, the overall prognosis of these patients is still extremely poor [1]. Overall, the molecular mechanisms responsible for the growth of pancreatic cancer are largely unclear [1].

MicroRNAs (miRNAs, miRs) are a group of non-coding, small RNAs with about 20-22 nucleotides in length, and act as gene regulators at posttranscriptional level through degradation of transcripts or inhibition of translation mainly by binding to 3'-untranslated region (3'-UTR) [2]. miRNAs have been implicated in numerous essential biological processes including development [3], proliferation [4, 5], differentiation [6], metabolism, apoptosis, necrosis, and autophagy [7]. The aberrant expressions of local as well as circulating miRNAs have been reported to be closely associated with a variety of diseases [8-10], which could thus be regarded as potential biomarkers for disease assessment [11-13]. In fact, multiple miRNAs such as miR-21, -29, -34a, -155, -196a, -215, -221, and -301a have been identified as potential regulators for pancreatic cancer [14-21]. Moreover, an upregulation of miR-222 has been reported in human pancreatic tumor tissues compared to normal tissues, which was associated with increased Ki-67 expression and poor prognosis in PC patients [22]. However, the functional and cellular mechanisms of miR-222 overexpression in the tumorigenesis of PC are poorly understood. Besides that, p27, p57 and phosphatase and tensin homolog (PTEN) are three potential target genes of miR-222 reported in other types of cancers [23, 24], however their functional relationship with miR-222 in PC remains unclear.

The miR-222 mimics, inhibitors and their negative controls (NC) were purchased from RiboBio (China). Capan-2 cells were transfected with miR-222 mimics (50 nM), inhibitors (100 nM) or their negative controls for 48 h using Lipofectamine 2000 (Invitrogen, USA) according to the manufacturer's instructions. P57 siRNA was purchased from RiboBio (China). P57 siRNA (100 nM) was transfected into Capan-2 cells with similar method described above.

The effects of miR-222 on the viability of Capan-2 cells were determined using a Cell counting kit-8 assay (CCK-8; Dojindo, Japan). Cells (1.5×105 cells per milliliter) were seeded in 96-well plates and were allowed to adhere overnight. After 48 h of transfection of miR-222 mimics or inhibitors, CCK-8 solution was added to each well and was incubated for 1 h at 37°C and the absorbance was measured at 450 nm using a spectrophotometer (Bio-Rad, USA).

Capan-2 cells were plated into 24-well plates at a density of 1.5×105 cells per milliliter and were allowed to adhere overnight in complete medium. Then cells were starved for 6 h with serum-free medium. After transfection, cells were incubated with 5-ethynyl-2'-deoxyuridine (EdU, RiboBio, China) for 6 h before staining. Cell proliferation was detected using Cell-Light™ EdU Cell Proliferation Detection Kit (RiboBio, China) following the manufacturer's instructions. Percentage of proliferative cells was determined by blinded quantitation of EdU-positive cells under fluorescent microscope (Leica, Germany) with 200X magnification.

Capan-2 cells were plated into 6-well plates at a density of 1.5×105 cells per milliliter and were allowed to adhere overnight in complete medium. Then cells were starved for 6 h with serum-free medium. Cells were harvested at 48 h post transfection of miR-222 mimics or inhibitors, and then were washed twice with PBS. After that, cells were fixed in 70% ethanol overnight at -20°C. Fixed cells were washed once in 4°C PBS, and then were stained with propidium iodide (PI) staining solution (50 µg/mL PI, 100 µg/mL RNase in PBS). PI-stained cells were analyzed for their DNA content by using a Beckman flow cytometry.

P27, p57 and PTEN, three potential target genes of miR-222 reported in other types of cancer cells, were chosen as candidates in Capan-2 cells. Firstly, Capan-2 cells were transfected with miR-222 mimics, inhibitors or their negative controls. Forty-eight hours after the transfection, the protein levels of p27, p57 and PTEN were determined by Western blot. Secondly, as p27 and PTEN were found to be unchanged while p57 was endogenous regulated in Capan-2 cells by miR-222. Finally, the miR-222 inhibitor (100 nM) and p57 siRNA (75 nM) co-transfection was used to check if miR-222 take effects through p57 in Capan-2 cells.

All quantitative data were presented as the mean ± SEM. An independent Student T test or one-way ANOVA was conducted to evaluate the one-way layout data. If a significant difference was observed, Bonferroni's post-hoc test was conducted to identify groups with significant differences. P-values < 0.05 were considered significant. All statistical analyses were performed with the software package SPSS statistics19.0 (IBM, USA) for Windows.

CCK-8 was added to the medium for 1 h and the presence of metabolically active viable cells was used as an index of cell proliferation. As showed by results based on CCK-8, miR-222 mimics could increase Capan-2 cell vitality while miR-222 inhibitors decreased that (Figure 2A).

To determine if this viability advantage was due to higher proliferation rate, we studied the effects of miR-222 in EdU incorporation and cell cycle regulation. The EdU assay confirmed that miR-222 mimics-transfected cells had a significant proliferative rate when compared with control cells, and miR-222 inhibitors reduced that (Figure 2B). Cell cycle analysis also further confirmed that miR-222 could accelerate cell cycle of Capan-2 cells by increasing S phase cells rate and decreasing G1 phase cells rate (Figure 2C). 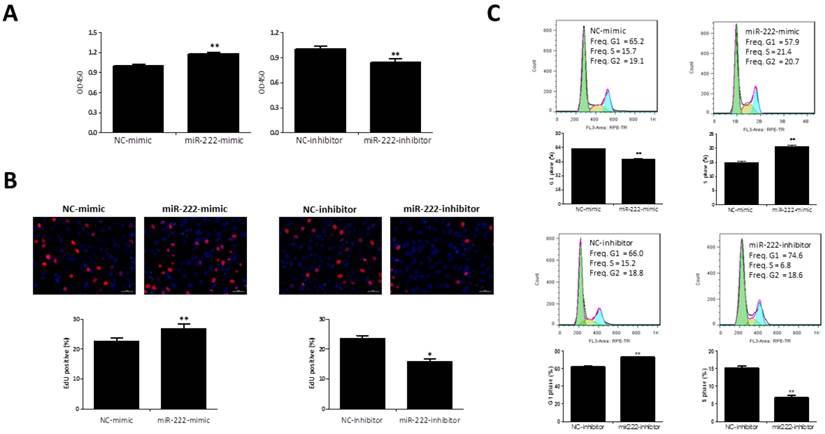 Although extensive efforts have been made into the elucidation of the molecular pathogenesis of PC, few effective treatment strategies for PC currently exist. Therefore, PC is still one of the most common cancer-related death causes and has the worst prognosis of any major malignancy, with less than 5% of patients alive 5 years after diagnosis. For these reasons, further understanding of aberrant regulatory mechanisms involved in PC progression is fairly critical. Here we provide novel data showing that miR-222 controls Capan-2 cell proliferation by targeting p57, indicating that inhibition of miR-222 might be a therapeutic way for PC.

Several studies have indicated that miR-222 was aberrantly expressed in multiple cancer types, including meningioma, prostate cancer, papillary thyroid cancer and breast cancer [25-29], and these results implied that miR-222 might be an important regulator for cancer. In vitro studies found that miR-222 led to enhanced cancer cell proliferation rate and migration [30-32], and these results indicated miR-222 as a potential onco-microRNA. However, a recent study demonstrated that miR-222 and its homologue miR-221 inhibited non-small cell lung cancer cell growth on 6 lung cancer cell lines [33], indicating the role of miR-222 in cancer might be an interesting duality. Importantly, miR-222 has previously been reported to be upregulated in human pancreatic tumor tissues compared to normal controls, which was associated with increased Ki-67 expression and reduced survival rate in PC patients [22]. Nevertheless, the functional and cellular mechanisms underlying the potential roles of miR-222 on the tumorigenesis of PC are largely unknown. Thus, in the current study, we further clarified the functional roles of miR-222 on the proliferation and cell cycle process of pancreatic cancer cells. Noteworthy, our data show that miR-222 is sufficient to induce the proliferation and the G1-to-S phase transition of human pancreatic cancer cell line Capan-2 in vitro.

P57 is a cyclin-dependent kinase (CDK) inhibitor, which is homologous to p27 and p21, belonging to the Cip/Kip family, and a well-established tumor suppressor [34, 35]. P57 was initially considered to inhibit cell cycle transition in cancer development, as tumor cells lacking p57 showed increased cell growth [36, 37]. As p57 is a well-known target gene of miR-222 [38], here we also further showed that p57, but not p27 and PTEN, was negatively regulated by miR-222 in Capan-2 cells. Importantly, inhibitory effect of miR-222 inhibitors on the proliferation of Capan-2 cells could be partially reversed by silencing p57, indicating that the effect of miR-222 on Capan-2 cell proliferation is, at least in part, mediated by p57.

Last but not least, given that miR-222 is essential for various cellular biological processes in different types of cancer, including cell proliferation, migration, apoptosis and others [3, 39], and that p57 has also been proved to regulate other aspects of cancer cells, for example, DNA methylation and histone modification [40, 41], it will also be of great interest to further study the impact of miR-222/p57 on the other biological processes of pancreatic cancer cells.

In conclusion, our study suggests that miR-222 controls the proliferation of Capan-2 cells, and this effect may be achieved by targeting p57. This study provides a novel idea for developing effective therapeutic strategy for PC through inhibiting miR-222 in PC patients.