Background: Unresectable intrahepatic and hilar cholangiocarcinomas carry a dismal prognosis. Systemic chemotherapy and conventional external beam radiation and brachytherapy have been used with limited success. We explored the use of stereotactic body radiotherapy (SBRT) for these patients.

Methods: Patients with unresectable intrahepatic or hilar cholangiocarcinoma or those with positive margins were included in this study. Systemic therapy was used at the discretion of the medical oncologist. The CyberknifeTM stereotactic body radiotherapy system used to treat these patients. Patients were treated with three daily fractions. Clinical and radiological follow-up were performed every three months.

Results: 34 patients (16 male and 18 female) with 42 lesions were included in this study. There were 32 unresectable tumors and two patients with resected tumors with positive margins. The median SBRT dose was 30Gy in three fractions. The median follow-up was 38 months (range 8-71 months). The actuarial local control rate was 79%. The median overall survival was 17 months and the median progression free survival was ten months. There were four Grade III toxicities (12%), including duodenal ulceration, cholangitis and liver abscess.

Cholangiocarcinomas, the second most common primary malignancy of the liver, are a heterogeneous group of malignancies ranging from intrahepatic to hilar, distal biliary and ampullary cancers(1,2). They are uncommon tumors with an age-adjusted incidence ratio of 0.92 per 100,000 in the US(3). Overall, intrahepatic and hilar cancers, including unresectable and advanced disease, carry a dismal prognosis with a 5-10% 5-year survival(4), with curative surgery providing the best outcomes. However, between 50-90% of patients present with unresectable disease at presentation,(6) and their median survival is often less than a year. Despite advances in diagnostic and surgical techniques, some patients are left with positive margins, and their outcome is poor without additional therapy(1,4,5,7). Systemic therapy and conventional radiotherapy has remained the standard of care for these patients, however with limitations and toxicity(8-10). These approaches provide local control in two-thirds of patients within their median overall survival time of 8-12 months(4).

The main limitation of conventional external beam radiotherapy has been the tolerance of the liver and the gastrointestinal tract adjacent to the tumor. Highly conformal stereotactic body radiotherapy (SBRT) has been used safely and effectively in hepatobiliary and pancreatic cancers(11-13). Another rationale for hypofractionated SBRT is that it does not significantly interrupt systemic chemotherapy(14). Hence we explored the role of SBRT in localized non-metastatic hilar or intrahepatic cholangiocarcinoma.

Our institutional IRB approved database (DFHCC 09-451) was retrospectively reviewed. Intrahepatic or hilar cholangiocarcinoma patients who were treated with SBRT were analyzed. Thirty-four patients with 42 treatments were identified between February 2006 and February 2014. Twenty-nine patients had primarily non-metastatic unresectable disease, three were medically inoperable and two had positive margins. There were 31 intrahepatic and 11 hilar lesions. Eighteen patients received systemic chemotherapy. Four patients had Gemcitabine alone and the rest received gemcitabine and cisplatin at the discretion of the medical oncologist.

At least two gold fiducial markers were placed percutaneously, intraoperatively or endoscopically in or near the tumor at least a week prior to the procedure. All patients underwent computed tomography (CT) simulation in supine position with VacLocTM body immobilization system. Intravenous and barium contrast agent was used during CT planning and 1 mm axial CT images were obtained in the region of interest. The gross tumor volume (GTV) and normal structures were contoured on axial CT images. The MultiplanTM software was used for treatment planning and all patients were treated with the CyberknifeTM system with real time fiducial tracking. The dose fractionation scheme was individualized based on normal tissue constraints to bowel and liver related to tumor volume and location of the tumor. The normal tissue tolerance parameters relevant in the upper abdomen in this study are for bowel (small bowel, hepatic flexure and stomach) and liver. In general, we use our institutional protocols for maximum point doses and dose volume histogram (DVH) constraints to these structures: bowel: 24 Gy in three fractions to no more than a third of the circumference of the bowel with a maximum point dose of 30 Gy in 3 fractions; Liver: at least 750 cc of healthy Liver V21 (Volume receiving more than 21Gy) is <30% and V15 (Volume receiving more than 15Gy) is less than 50%. Three daily fractions were typically used, given between chemotherapy cycles when systemic therapy was used. All patients were premedicated with lorazepam, proton pump inhibitors and prochlorperazine.

Follow-up data included status of disease, date of progression if any, site of failure and last follow up date. CT imaging and CA19-9 tumor markers evaluated tumor response to treatment. Local failure was defined as increase in the sum of the longest diameter of target lesion. If a new lesion developed in the liver but outside the radiation field, it was interpreted as failure outside the treated area. Acute and late toxicities were defined as symptoms that develop within three months after SBRT or later, respectively.

Thirty-four patients with 42 lesions were treated with SBRT using the CyberKnifeTM for intrahepatic or hilar cholangiocarcinoma at our center between February 2006 and February 2014. Sixteen males and 18 females were included. The median age at the time of treatment was 72 years (range 38-94 years).

Twenty-nine patients had unresectable disease, three were medically inoperable and two had positive margins. There were 31 intrahepatic lesions and 11 hilar cholangiocarcinomas. Twenty-one (62%) patients had biliary stents.

The patient and treatment characteristics are described in Table 1.

The SBRT treatment parameters are described in Table 2. A representative treatment plan for hilar cholangiocarcinoma is shown in Figure 1.

Median follow-up was 38 months (8 to 71 months). The overall median survival after SBRT was 17 months. The actuarial 1-year, 2-year and 4-year survival rates were 58%, 31% and 19% respectively. The 1-year and 4-year actuarial local control rates were 88% and 79%. Median progression-free survival was 10 months after SBRT. Four patients failed in the liver outside the treatment area, and nine patients developed distant metastasis. The Kaplan-Meier actuarial local control and overall survival is shown in Figure 2. 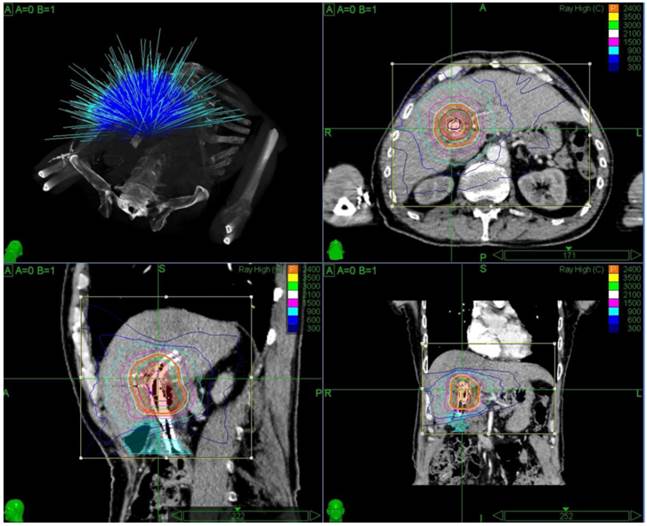 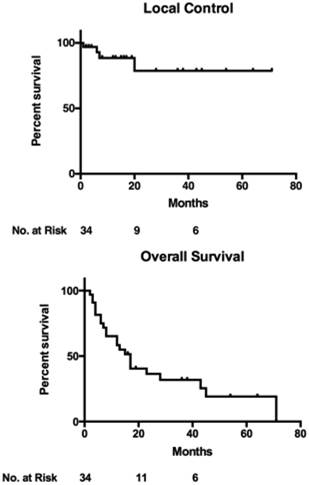 Complete surgical resection is the only potentially curative treatment for intrahepatic or hilar cholangiocarcinoma. However in non-metastatic disease, the local extent of the disease often precludes safe or margin-negative resection. We have shown that stereotactic body radiotherapy can be a useful local therapeutic modality in this situation.

The reported 5-year survival after potentially curative surgery in all patients can be less than 20%, improving to about 30-60% with R0 (microscopic margin negative) resection, with median survival times of around 15 and 28 months respectively(15). R0 resection is the major prognostic factor after surgical resection(15,16) and extensive resections including trisegmentectomey(17), and liver transplantation(6,18) have been used to achieve a complete resection. Although surgical resection rates in non-metastatic patients at presentation can be around 60% (7), about 15-25% of patients are found to have more extensive disease at laparotomy despite advances in preoperative diagnostic improvements leaving a proportion of patients with R1 or R2 resections(19).

The conventional treatment for unresectable disease or after R1 (microscopic residual) or R2 (macroscopic residual) resections has been radiation therapy with or without systemic chemotherapy. The use of conventional radiation therapy alone was associated with a median survival of around 10 months(20-22). Concurrent chemoradiation with 5-fluorouracil-based systemic therapy improved median survival to around 15 months(23-25). The addition of brachytherapy appeared to have increased local control rates, without significantly impacting overall survival(26-30). An early EORTC study(31) and many single institution studies demonstrated improved outcomes with the addition of adjuvant post-operative radiation therapy(32,33). In patients with positive margins, adjuvant radiation(34) and the use of postoperative chemoradiation therapy(35) have demonstrated extension of median survival. Based on these data, it is considered standard practice to use chemoradiation in this setting.

Conventional chemoradiation involves up to six weeks of daily radiation with systemic therapy associated with significant toxicity(8,36). Others groups have questioned the value and usefulness chemoradiation in this setting(8,37). Modern systemic therapy regimens appear to have similar overall survival outcomes(10), emphasizing the importance of systemic therapy in this disease. Stereotactic body radiotherapy (SBRT) has been used in upper abdominal malignancies with useful efficacy and tolerability(11,12,14,38-41). It is typically dosed in one to five treatments without interfering with the needed systemic therapy.

We present the largest series of patients with intrahepatic and hilar cholangiocarcinoma treated with SBRT. Other published series and outcomes are reported in Table 3.

With a median follow up of 38 months, our median survival of 17 months and 4-year actuarial local control rate of 79% compares well with other series. Herfarth et al, Tse et al and Goodman et al published initial reports on 3-10 patients with cholangiocarcinoma among other liver tumors, hypothesizing the feasibility of SBRT in locally advanced cholangiocarcinoma(40,42,43). These reports included no Grade III or more toxicity. Polistina et al reported on a series of 10 patients with Klatskin tumors using SBRT, 30 Gy in 3 fractions, and gemcitabine with excellent outcomes with a median survival of 35.5 months(44). Their series did not include patients with unresectable intrahepatic cholangiocarcinoma. Two patients had duodenal bleeding, one had late duodenal ulceration and two others developed duodenal stenosis. Barney et al reported on 10 patients, with a mix of primary and recurrent tumors treated with SBRT(45). They used a median of five fractions to 55 Gy. With median follow up of 14 months, they reported a 1-year survival of 73% and 100% local control in their short follow up. They also reported a case of late biliary stricture and death due to liver failure. Welling et al utilized neoadjuvant SBRT, followed by maintenance capecitabine until transplant in 12 patients(46). Six of their patients eventually underwent a liver transplant with five of the six patients showing partial pathological response. There were 11 transplant-associated complications with a 1-year survival of 83%.

The most comparable series to the present study is from Kopek et al (47). The majority of their patients (26/27) had Klatskin tumors. They were treated with a fixed prescription of 45 Gy in three fractions with CTV (Clinical Target Volume) and PTV (Planning Target Volume) expansions, and no respiratory motion management was used during treatment. Their median progression-free and overall survival was 6.7 and 10.6 months respectively. However, six patients developed severe duodenal/pyloric ulceration and nine developed duodenal stenosis. The authors performed a dose-volume analysis of the duodenal dose that correlated with toxicity. This is not surprising given the close proximity of the duodenum to hilar tumors. Our results with 12% long-term Grade III toxicity compares favorably with this and other series. The primary differences which could explain this difference could be the combination of duodenal tolerance-based prescription used in our study and respiratory motion tracking used with the CyberknifeTM system. We have previously shown that prescribing radiation to the tolerance of dose limiting duodenum can have a favorable toxicity profile in treating pancreas cancer with SBRT(14). Moreover, intrahepatic and hilar tumors are bound to move significantly with respiration, bringing normal tissue within the high dose area if not tracked and adequately accounted for(48-50).

Surgical resection remains the only potential curative treatment for intrahepatic and hilar cholangiocarcinoma. When tumors are unresectable or when resections results in positive margins, outcomes are poor without adjuvant therapy. While conventional chemoradiation and systemic therapy may improve local control and survival it can be arduous and associated with toxicity. SBRT can be an effective and tolerable treatment in this situation.