HA is a large glycosaminoglycan composed of repeating β-1,4-linked D-glucuronic acid and β-1,3-N-acetyl-D-glucosamine disaccharide units that accumulates in the extracellular matrix (ECM) [1]. In cancerous tissue, HA is secreted from stromal fibroblasts in response to humoral factors derived from tumor cells [2], promoting tumor transformation, metastasis [3, 4], and cell motility and migration [5-8]. In our previous study [9], we demonstrated a relationship between increased expression of HA and poor prognosis in patients with PDAC. Recently, HA receptors have been detected on tumor cells.

One of the HA receptors, RHAMM, was first described by Turley [10]; this receptor was originally identified as part of a multimeric complex (HARC) that regulates HA-induced motility of H-ras-transformed fibroblasts [8] and is a peptide in the supernatants from proliferative fibroblasts [5] with many intracellular and extracellular functions. On the cell surface, RHAMM binds with CD44, and HA binding to this complex stimulates downstream signaling that activates RhoA-activated protein kinase and the MAPK/extracellular signal regulated protein kinase (ERK) 1/2 pathway, which results in the expressions of genes that are required for motility and invasion in various cancers [11-13]. RHAMM, which is a cancer-associated antigen, alone or in complex with CD44, osteopontin, and integrins is involved in tumorigenesis, progression, invasion and metastasis through interactions with signaling cascades related to ERK1/2, breast cancer 1 (BRCA1), BRCA1-associated RING domain 1, tyrosine and serine/threonine kinases, PDGF receptor, Src and Erk MAP kinases [6, 14-22]. Intracellular RHAMM, which is expressed in a cell cycle-dependent manner, has been described as an actin- and microtubule-associated protein that forms a complex with the dynein molecular motor that localizes to the centrosome to maintain spindle integrity [23-26].

Archival tissue specimens were collected from 70 PDAC patients who underwent surgical resection between 1982 and 2011 in our department. Clinicopathological characteristics of these patients have been described previously [9]. The study was approved by the ethical committee of the university of occupational and environmental health, and written informed consent was obtained from all patients.

The PDAC tissues were incubated with anti-RHAMM IgG (Abcam, Cambridge, MA, USA) at a 1:100 dilution for 2 h at room temperature. The sections were incubated for 10 min with biotinylated anti-rabbit antibody for RHAMM according to the manufacture's instruction of Histofine SAB-PO (R) kit (Nichirei Biosciences Inc, Tokyo, Japan). The positive control was archival tissue from a normal human testis. The scoring method, which combined intensity and the percentage of positivity, was previously described [9]. The slides were scored by two individual researchers (N.S. and X.C.) on a blinded basis. The extent and intensity measures for each score were combined to identify “weak” expression or “strong” expression.

The statistical analyses were performed with SPSS statistical software (version 21.0; SPSS, Inc., Chicago, IL, USA). The data are expressed as the mean ± SD. The differences in the RHAMM mRNA levels among the pancreatic tissues (normal versus cancer) were compared using the Wilcoxon signed rank test. The survival curves were constructed according to the Kaplan-Meier method and were compared using the log-rank test. Cox proportional hazards regression analysis was used to evaluate independent prognostic factors associated with survival. Statistical significance was accepted when P < 0.05. All p values are two-tailed. The experiments performed in this study were repeated three independent times. 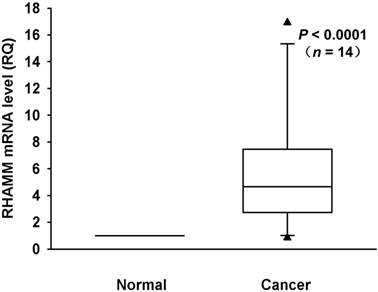 The RHAMM protein expression pattern was investigated in tissue samples from 70 PDAC patients who underwent surgical resection using immunohistochemistry. Staining of RHAMM was found predominantly in the cytomembrane and cytoplasm of tumor cells. Of 70 patients who were evaluable for RHAMM staining, 52 (74%) patients were classified as having strong RHAMM expression, and the remaining 18 (26%) patients were classified as having weak expression, according to the intensity score (Fig. 4).

Correlation between RHAMM expression and prognosis in PDAC patients

We explored the correlations between the RHAMM expression pattern and patient prognosis by comparing the survival of patients between the strong and weak expression groups. As shown in Fig. 5, strong expression of RHAMM was significantly associated with a shorter survival time after surgery (log rank = 4.284, P = 0.038).

RHAMM protein expression in PDAC cell lines and HPDE cell line was investigated by western blotting. It was higher in most PDAC cells relative to the expression in HPDE cells (median, 3.8-fold; range, 1.0- to 10.7-fold). 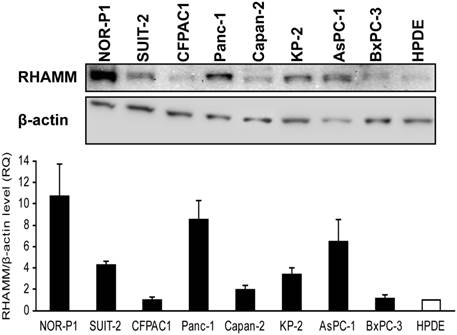 Immunohistochemical stainings of RHAMM in PDAC tissues. Weak and strong RHAMM expression patterns were identified, predominantly in tumor cells. The staining patterns were found in the cytomembrane and cytoplasm (original magnification 50× and 200×).

Kaplan-Meier survival curve of patients according to the expression patterns of RHAMM. Strong expression of RHAMM was significantly associated with poor survival (log rank = 4.284, P = 0.038). 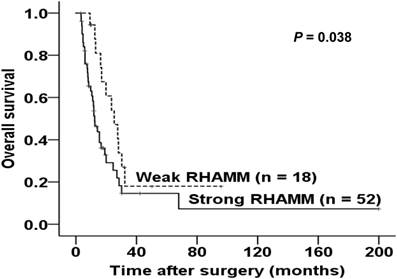 Several studies have identified that RHAMM overexpression is associated with the invasion, progression and poor prognosis of breast cancer [20, 29, 38]; with the histological grade, invasion and metastasis of endometrial carcinoma [19]; with the invasion of pancreatic adenocarcinoma [39]; and with adverse prognostic factors in colorectal and gastric cancer [33, 35]. Abetamann V et al. indicated that RHAMM contributes to the invasion of pancreatic adenocarcinoma by investigating RHAMM mRNA expression in 10 cell lines. These authors could not investigate RHAMM mRNA expression in PDAC tissues and RHAMM protein expression in PDAC cell lines and did not clarify the clinical effects of the RHAMM expression or the prognostic value for PDAC. Our study is the first report to determine the correlation between the expression pattern of RHAMM and the survival of patients with PDAC.

We used immunohistochemistry to identify RHAMM protein expression in the cytomembrane and cytoplasm in PDAC cells, although expression was not observed in the nucleus, which was similar to the pattern observed in other tumor types. Strong RHAMM expression has been reported in 65% of oral squamous cell cancers [40], 40% of colorectal cancers [41] and 28% of gastric cancers [35]. Thus, expression may depend on the cancer type.

RHAMM mediates the Ras and TGF-b signaling pathways and is associated with poor prognosis in a variety of tumorous entities [20, 38, 42]. RHAMM expression in PDAC was found to significantly inversely correlate with survival in this study. This finding is in agreement with findings for other types of tumors such as breast, colon, and gastric cancer. Additionally, we found that the RHAMM mRNA levels were elevated in pancreatic tumor tissues, regardless of the tumor grade, compared with the levels in normal pancreatic tissues. Our studies suggest that RHAMM could be used in clinical settings as a novel prognostic marker in patients with PDAC.

Frequent overexpression of RHAMM has led to the proposal that it could be a target for PDAC therapy. By targeting its extracellular functions, the biological study of RHAMM in tumor progression has led to novel tumor therapies. Pre-clinical, phase I and II trials are currently investigating the ability of a RHAMM-derived peptide vaccine to promote immune recognition and destruction of tumors by activated T cells, thus targeting RHAMM as a novel cancer-associated antigen [43-45]. RHAMM has been used to block the extracellular function of RHAMM on the surface of cancer cells as a promising target for antibody therapy [34]. Thus, these findings suggest that RHAMM may serve as a prognostic marker and as an attractive target for PDAC therapy.

We thank Ms. Ueda for her technical assistance and Ms. Ying Jiang (Ph.D., research associate, department of health development, institute of industrial ecological sciences, university of occupational and environmental health, Japan) for her help with the statistical analysis.

4. Bartolazzi A, Peach R, Aruffo A, Stamenkovic I. Interaction between CD44 and hyaluronate is directly implicated in the regulation of tumor development. J Exp Med. 1994;180:53-66