Background: Active efflux of irinotecan by ATP-binding cassette (ABC)-transporters, in particular ABCB1 and ABCG2, is a well-established drug resistance mechanism in vitro and in pre-clinical mouse models, but its relevance in colorectal cancer (CRC) patients is unknown. Therefore, we assessed the association between ABC-transporter expression and tumour response to irinotecan in patients with metastatic CRC.

Methods: Tissue microarrays of a large cohort of metastatic CRC patients treated with irinotecan in a prospective study (CAIRO study; n=566) were analysed for expression of ABCB1 and ABCG2 by immunohistochemistry. Kaplan-Meier and Cox proportional hazard regression analyses were performed to assess the association of ABC transporter expression with irinotecan response. Gene expression profiles of 17 paired tumours were used to assess the concordance of ABCB1/ABCG2 expression in primary CRC and corresponding metastases.

Results: The response to irinotecan was not significantly different between primary tumours with positive versus negative expression of ABCB1 (5.8 vs 5.7 months, p=0.696) or ABCG2 (5.7 vs 6.1 months, p=0.811). Multivariate analysis showed neither ABCB1 nor ABCG2 were independent predictors for progression free survival. There was a mediocre to poor concordance between ABC-transporter expression in paired tumours.

Conclusion: In metastatic CRC, ABC-transporter expression in the primary tumour does not predict irinotecan response.

The vast majority of patients with metastatic colorectal cancer (CRC) receive systemic therapy, either alone or in combination with surgery. Drugs with proven efficacy are fluoropyrimidines, oxaliplatin and irinotecan.[1] Irinotecan is effective both when given as monotherapy and in combination schedules. However, intrinsic and acquired resistance is usually observed. Interestingly, tumours progressing on fluorpyrimidine-oxaliplatin treatment can still respond to irinotecan and vice versa, suggesting different mechanisms of drug resistance.[1-3] Acquisition of 'multi-drug resistance' eventually causes failure of systemic cancer treatment.

The active efflux of chemotherapeutic agents such as irinotecan from tumour cells by transmembrane pumps belonging to the ATP-binding cassette (ABC) family has been extensively reported as a potential clinically relevant mechanism of (multi-)drug resistance.[4-8] ABC-transporters are expressed on differentiated cells facing the lumen, both in normal colon tissue and in colorectal tumours.[4, 9-12] In normal colon tissue this serves to expel toxic substances into the intestinal lumen to prevent their systemic uptake. Similarly, in colorectal tumours ABC-transporters are expressed on the surface of lumen-facing differentiated tumour cells.[4] ABC-transporters may thus be potential targets for reversing efflux-mediated chemotherapy resistance. However, the results of clinical trials evaluating combination therapy of ABC-transporter inhibitors and chemotherapy were negative.[13, 14] Still, high ABC-transporter expression has been associated with poor outcome.[15, 16] In this study we assessed whether ABC-transporter expression was related to the response to irinotecan in patients with metastatic CRC.

Tumour tissue was obtained from patients enrolled in the CAIRO (Sequential versus combination chemotherapy with capecitabine, irinotecan, and oxaliplatin in metastatic CRC (CAIRO): a phase III randomized controlled trial) study [17] of the Dutch Colorectal Cancer Group (DCCG). For this study formalin-fixed paraffin embedded material from the primary tumour was obtained from 566 of the 803 participating patients of the CAIRO study. No tissue material was obtained in 247 patients, because resection of the primary tumour was not performed or the material was insufficient or not available. Tissue micro arrays (TMAs) were produced by taking 2 mm punches of each specimen as described previously.[18]

Slides were created by transverse sectioning (4µm). The paraffin-embedded slides were deparaffinated with xylene and rehydrated through a series of ethanol concentrations. Endogenous peroxidase activity was blocked by incubating in 0.3% H2O2 in methanol at room temperature for half an hour, thereafter antigen retrieval was achieved by heating the slides in a citrate buffer, pH 6.0, for 20 minutes; followed by cooling in the same buffer for 10 minutes. The slides were incubated with a diluted primary antibody overnight at 4°C. Incubation with an undiluted secondary antibody (Brightvision®) for 30 minutes followed. Rinsing between steps was performed with phosphate buffered saline. The slides were developed with diaminobenzidine and counterstained with Bayers' haematoxylin. Hereafter the slides were dehydrated and mounted with cover slips.

Slide scoring of the CAIRO TMA was performed by three observers (AP, BE and PvD), cores were eligible for scoring if tumour cells were identified. If the slide scoring was discordant, the opinion of pathologist PvD was final. The luminal, cytoplasmic and stromal expression of ABCB1 were evaluated. For ABCG2, the luminal and cytoplasmic expression were evaluated. The luminal expression was scored in two ways, the percentage of lumina that were positively stained, and semi-quantitatively as - = no staining, + = weak, ++ = moderate and +++ = strong. Cytoplasmic and stromal expression were scored semi-quantitative, in which - = no staining, + = weak, ++ = moderate and +++ = strong.

The TMA solely contains samples of the primary CRC of the patients in the CAIRO cohort. As these patients were not eligible for resection, metastases material was not available. To determine whether predicting irinotecan response based on primary CRC ABC-transporter expression levels in patients with metastatic CRC is legitimate, we assessed the concordance of ABCB1 and ABCG2 expression between primary CRC and their corresponding CRLM. To this end we used the gene expression profiles of 46 patients.[19] The dataset was uploaded into the R2 microarray analysis and visualization platform (http://r2.amc.nl) and analysed. We compared the expression levels of ABCB1 and ABCG2 in normal colon tissue, primary CRC and the corresponding liver metastases.

Patients from the CAIRO study were subdivided into two groups based on positive or negative luminal ABC-transporter immunohistochemistry staining patterns. Associations between the staining patterns of the ABC-transporters were calculated via the Kruskal-Wallis test, Χ2-test or the Spearman's test where appropriate. Patients without tumour cells in the 2mm cores or missing cores, or patients who failed to start second line therapy with irinotecan were excluded from the following analyses.

Patient and tumour characteristics were compared using Wilcoxon's rank sum test or Χ2-test where appropriate. Initial treatment response was analysed by response on the first CT-scan which was estimated using Wilcoxon Χ2-test. Progression-free survival (PFS) for first-line therapy was calculated from the date of randomization to the first observation of disease progression or death from any cause. PFS for second line therapy was defined as the time from the failure of the first line therapy until first progression reported after the start of second-line therapy or death, whichever came first. Treatment response was analysed by PFS curves using the Kaplan-Meier method and compared with the log-rank test. Multivariate analysis was performed using a Cox proportional hazard regression model.

Staining patterns of ABCB1 and ABCG2

A total of 446 patients in this study received irinotecan, either as second line monotherapy (n=177) or as first line therapy in combination with capecitabine (n=269), and were used for the following analyses (Figure 1). Patient characteristics including age, gender, performance status, predominant localization of metastasis, serum lactate dehydrogenase (LDH), prior adjuvant therapy, and synchronous/metachronous metastatic disease, were equally distributed between the ABC transporter subgroups for the patients included in this study (Table 1). 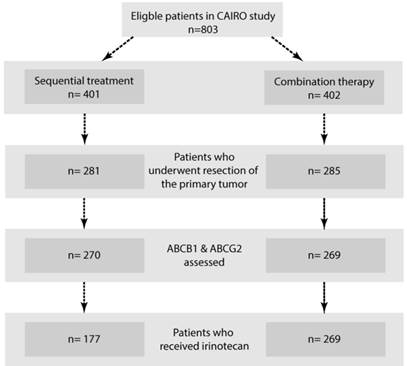 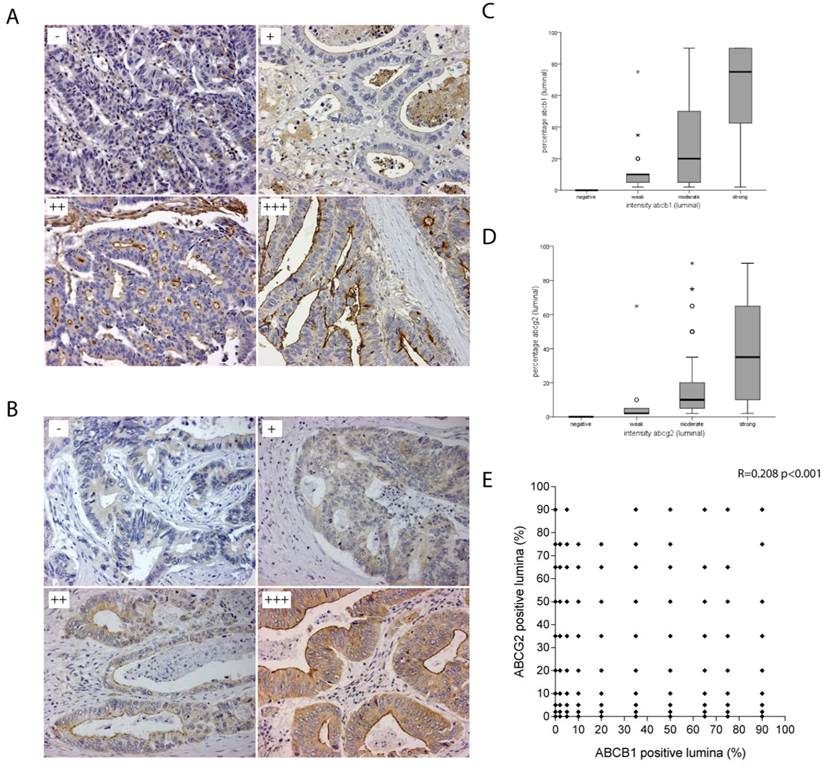 ABC-transporter expression does not correlate with response to irinotecan

Age was compared via the Wilcoxon rank sum test, for all other variables the Χ2-test was used.

All variables were compared via the Χ2-test.

Response on first cycle chemotherapy based on RECIST criteria

After multivariate analysis neither ABCB1 nor ABCG2 were found to be independent predictors for PFS after monotherapy with irinotecan or combination therapy of capecitabine and irinotecan. 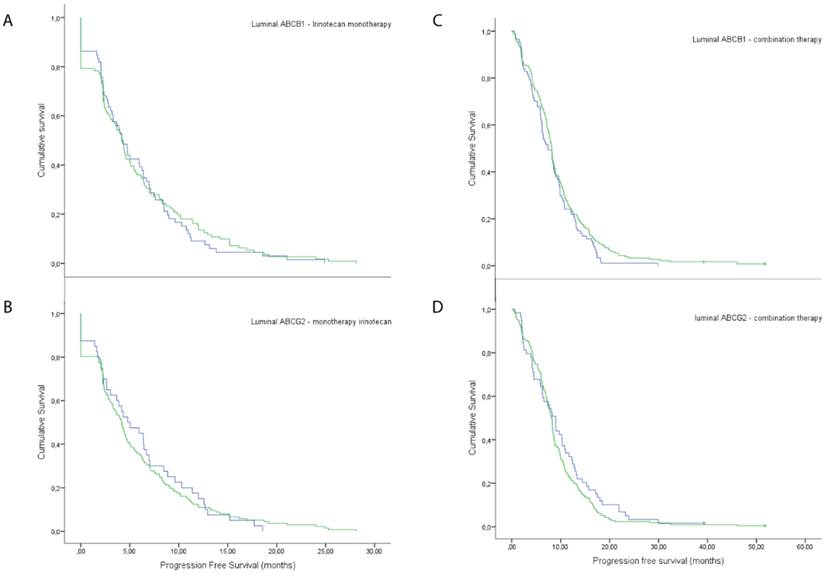 In this report we retrospectively analysed the correlation of ABCB1 and ABCG2 expression in the primary tumour with response of the corresponding metastases to irinotecan mono- and combination therapy in patients with metastatic CRC. For this purpose TMAs from the CAIRO study were used, this is the only large study cohort with tumour specimens available from CRC patients that were treated with irinotecan monotherapy. Our study shows that the response rate to irinotecan for patients with metastatic CRC is not related to expression of ABCB1 and ABCG2, the two major irinotecan efflux pumps. Likewise, germ line DNA polymorphisms in ABCB1 tested in patients enrolled in the FOCUS Trial did not predict response to irinotecan in combination with FU either.[20] These data strongly suggest that other drug resistance mechanisms must play a dominant role in determining the response of metastatic CRC to irinotecan. However, to our knowledge there are no clinical trials that use proportional hazard models to determine the influence of ABC-transporters on the irinotecan response.

A number of issues may have precluded us from finding a significant association between ABC transporter expression and irinotecan response. First, tumour heterogeneity is an intrinsic problem when creating TMAs [21, 22] and this may influence any study seeking to associate drug resistance and survival data with expression of single or a few markers. Nevertheless, TMAs are a very useful high-throughput screening method with high concordance comparing to full slide analysis and are therefore very useful when analysing large numbers of tumours. [23] To minimize the heterogeneity problem, the TMA that was generated for the current study contained 2.0 mm cores of each tumour, considerably bigger cores than the standard of 0.6mm.[24]

Second, we have used a patient cohort in which irinotecan was used as second line therapy. First line chemotherapy may have influenced the expression levels of ABC-transporters. Indeed, in vitro experiments have shown that pre-treatment with 5-FU or oxaliplatin alters mRNA levels of ABCB1 and ABCG2.[25] Multidrug resistance may either be acquired as a consequence of drug-induced alterations in tumour biology [26, 27] or as a consequence of drug-induced selection of pre-existent drug-resistant clones.[28] In this study, about 20 percent of all tumours received prior adjuvant therapy. Alterations or selection of pre-existent drug-resistant clones in these tumours could have influenced the results of this study, even though prior adjuvant therapy was not identified as an independent predictor in the CAIRO study.[17] However, when excluding these patients from the analyses we could still not find any correlation between ABC transporter expression and PFS.

Third, the TMA only contained samples of the primary CRC of the patients in the CAIRO cohort. Patients with resectable metastatic disease were not included in the CAIRO trial, nor were biopsies taken during or after treatment precluding the analysis of ABC transporter expression in the metastasis itself. Therefore, we have used primary tumour specimens to predict treatment efficacy in metastatic disease. By analysing mRNA levels in paired primary tumours and metastases we showed that there is a mediocre to poor concordance.

Although we cannot exclude that ABC transporter expression may relate to response to irinotecan, we conclude from the present study that immunohistochemical analysis of ABCB1 and/or ABCG2 expression in primary CRC has no value in the selection of patients for irinotecan therapy in metastatic CRC.