Methods: 256 ovarian cancer patients who received a cytoreductive surgery were retrospectively reviewed. The prognostic impact of the ABO blood group with respect to overall survival (OS) was analyzed.

Ovarian cancer is a highly fatal gynecologic cancer and the fifth leading cause of cancer mortality in women, with 14,030 deaths occurring in the United States per year (1). In China, ovarian cancer is the tenth cancer incidence rate of 7.95 per 100,000 women during 2009 (2). Most cases of ovarian cancer are diagnosed at an advanced stage and quickly progress, resulting in a poor outcome.

At present, prognostic factors for ovarian cancer reflect the intrinsic biology of a tumor (e.g. histological subtype, grade of differentiation), cancer stage, residual disease and the performance status (3-5). Although prognostic factors for ovarian cancer have conducted intensive studies, including in the field of molecular biology, but for the prognosis of ovarian cancer can be different despite similar stages and grades. A better understanding of an ideal biomarker with readily available, inexpensive and reproducible of ovarian cancer could improve the prognosis of patients and provide therapies that are more appropriate.

Recently, the associations between ABO blood group and survival have been evaluated in several malignancy, including pancreatic cancer (6), esophageal squamous cell carcinoma (7), colon cancer (8), nasopharyngeal carcinoma (9), and breast cancer (10). Previous studies suggested that blood type A was associated with an increased risk of ovarian cancer (11,12), while another study presence of the B antigen was positively associated with ovarian cancer incidence (13). However, to date, studies of the impact of ABO blood group on the survival of patients with ovarian cancer remained uncertain. Therefore, the aim of the retrospective analysis was to analyze the relationship between ABO blood type and the survival of patients with ovarian cancer underwent cytoreductive surgery as their primary treatment in Chinese population.

Two hundred fifty-six patients with primary ovarian cancer who underwent cytoreductive surgery at the Sun Yat-Sen University Cancer Center between December 2004 and March 2012 were retrospectively analyzed. Cytoreductive surgery was considered to have achieved optimal debulking when the residual disease was < 1 cm. Patients with synchronous or metachronous tumors, borderline tumors and advanced stage (stage IV) ovarian cancer were excluded. Other patients with missing data were also excluded. Patients who with indications for chemotherapy did not complete at least four cycles of chemotherapy were excluded. Patients were considered eligible only when the following data were available. The study was approved by the ethics committee of Sun Yat-Sen University Cancer Center. All patients provided written consent for storage of their information in the hospital database, and for the research use of the information.

Follow up was performed every 3-6 months. The follow-up visits consisted of a physical examination and laboratory studies at least every 6 months or when clinically indicated. The endpoint of the study was overall survival (OS). OS was calculated as the period from the date of diagnosis to the date of death from any cause or the date of last follow-up.

The χ2 and Fisher's exact tests were used to analyze the differences between qualitative data. Calculation of survival rates were plotted by the Kaplan-Meier method, and compared using the log-rank test. Univariate and multivariate Cox regression analyses were performed. Multivariable analyses were performed for factors which were significantly associated with OS in univariate analyses. All data were analyzed the SPSS statistical software package, version 16.0 (IBM Corporation, Armonk, NY, USA). A value of p-value < 0.05 was considered statistically significant.

Overall survival for patients with ovarian cancer according to different ABO blood types. 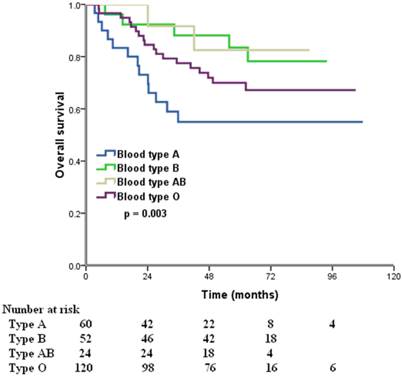 Overall survival for patients with ovarian cancer with blood type A and non-A blood types. 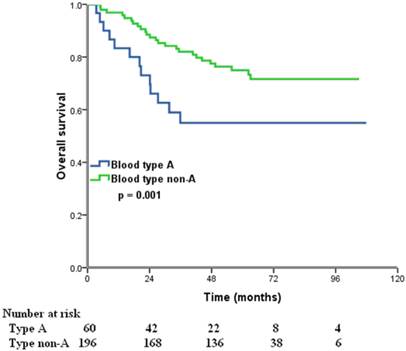 The role of inherited blood group antigens in cancer risk and progression has been intensely studied across many different types of solid organ and hematologic malignancies (13-16). At present, the impacts of ABO blood group on the survival of patients with ovarian cancer are limited. To the best of our knowledge, only one investigation is available that has reviewed the relationship between the ABO blood group and prognosis in ovarian cancer patients. In 92 patients with ovarian cancer, blood type A was found to be occur more frequently than in those with the other blood types and patients with blood group A was associated with a poor prognosis (17). 256 patients enrolled in the present study, and the proportions of blood types A, B, O, and AB were approximately similar to those of the cases in the Nurses' Health Study with the proportions were 31.2%, 17.5%, 41.0%, and 10.3%, respectively (13). And our study further clarified the prognostic value of ABO blood groups in ovarian cancer with patient survival in Chinese population.

Recently studies have demonstrated that the risk for ovarian cancer of being significantly higher in patients with blood group A (11,12). Owing to these data, we hypothesized that the predisposing environmental and genetic background associated with blood group A might develop ovarian cancer to a poorer prognosis. Our findings are quite similar to previous studies in nasopharyngeal carcinoma (9) and breast cancer (18), while the other studies showed that non-AB blood types in colon cancer (8), O blood type in bladder cancer (19) and esophageal squamous cell carcinoma (20) were poor prognostic factors. Conversely, studies indicated that ABO blood group was not associated with survival of triple negative breast cancer (21), gastric adenocarcinoma (22), and renal cell carcinoma (23). Proposed reasons for these conflicting results include heterogeneity of study populations, differences in ABO distribution or other demographics, and limited study sizes.

It is remained uncertain why ABO blood groups affect the survival of patients with ovarian cancer. However, growing studies discussed the possible mechanisms of the ABO blood groups affect the survival. The associations between the ABO blood group and tumor prognosis including inflammation, immunosurveillance for cancer cells, intracellular adhesion, and membrane signaling have been proposed (24). It was also found that ABO blood group antigen expression on cancer cells was modified by hypermethylation of ABO gene promoter (25), which might be related with the tumor invasion and metastasis. Previous studies showed that the number of methylated gene promoters increased with age (26,27), which may partly explain the reason for patients with age > 50 years had worse OS in this study.

The ABO gene is located on chromosome 9q34 encodes glycosyltransferases, which is frequently lost in ovarian cancer (28). The gene encodes for glycosyltransferases, which catalyze the step-by-step transfer of nucleotide donor sugars to the H antigen to form the A and B antigen (29). Aberrant glycosylation represents a hall mark of cancer development and progression (30). Thus, we hypothesize that patients with blood type A have impacted tumor cell invasion and immune responses of ovarian cancer cells and more susceptible to disease failure. Further studies of the impact of blood type on tumor behavior or response to therapy would be important to elucidate the potential impact of blood type on tumor biology and might help guide individualized therapy for ovarian cancer.

In conclusion, the results of the present study show that ABO blood group is a prognostic factor for survival in ovarian cancer patients after cytoreductive surgery. Patients with blood type A had a significantly worse OS than those with non-A types, especially in patients with age > 50 years. However, our result should be verified by further studies, and the related mechanism should be studied to elucidate the association between the ABO blood group and tumor genetic or biological differences.

The authors declare that there are no conflicts of interest.