Tumor cells require angiogenesis to deliver nutrients and oxygen to support their fast growth and metabolism. The vascular endothelial growth factor (VEGF) pathway plays an important role in promoting angiogenesis, including tumor-induced angiogenesis. Recent clinical trials have demonstrated the benefit of targeting VEGF in the treatment of glioblastoma. However, the prognostic significance of the expression of VEGFA and its receptors VEGFR1 (FLT1) and VEGFR2 (KDR) are still largely elusive. In the present study, we aimed to investigate the prognostic significance of these three factors, alone or in combination, in glioma patients. Gene mRNA expression was extracted from three independent brain tumor cohorts totaling 242 patients and the association between gene expression and survival was tested. We found that when VEGFA, FLT1 and KDR expressions were considered alone, only VEGFA demonstrated a significant association with patient survival. Patients with high expression of both VEGFA and either receptor had significantly worse survival than patients expressing both factors at a low level. Importantly, we found that those patients whose tumors overexpressed all three genes had a significantly shorter survival compared to those patients with a low level expression of these genes. Our results suggest that a high level expression of VEGFA and its receptors, both FLT1 and KDR, may be required for brain tumor progression, and that these three factors should be considered together as a prognostic indicator for brain tumor patients.

Gliomas are the most common type of primary brain tumors, of which grade 3 astrocytoma and grade IV glioblastoma are highly malignant and are associated with a very poor prognosis [1]. As with other malignancies, the growth and development of gliomas is reliant on the angiogenic process. VEGF is an important factor promoting tumor angiogenesis, and the activation of VEGF pathway requires the binding of the ligand, such as VEGFA, to one of its receptors, such as FLT1 or KDR, thus generating downstream signals to stimulate the proliferation and structural reorganization of endothelial cells [2]. The VEGF family is divided into four members, including VEGFA, VEGFB, VEGFC and VEGFD, and VEGF receptors consist of three subtypes, including VEGFR1 (FLT1), VEGFR2 (KDR), and VEGFR3 [3]. VEGFA is a key regulator of developmental vasculogenesis and angiogenesis and it mainly interacts with FLT1 and KDR to generate downstream signaling [3]. FLT1 is a tyrosine kinase receptor that binds VEGFA with about 10-fold higher affinity than KDR, and although it is poorly activated by VEGF ligands, it has been shown to promote tumor growth and metastasis [3]. On the other hand, VEGF ligand binding to KDR, also a tyrosine kinase receptor, generates potent downstream signals that leads to endothelial cell growth and migration [3]. The development of targeted therapy for malignant glioma has had limited success mainly due to the parallel and converging complex interactions between several important pathways, including pathways that regulate tumor angiogenesis [4].

VEGF, FLT1 and KDR, were all shown to be up-regulated in brain tumor vasculature [5], signifying the importance of angiogenesis in glioma. Suppressing expression of VEGF in tumoral cells by anti-sense RNA technology was shown to inhibit the growth of glioma cells in vivo in nude mice [6]. In addition, VEGF also plays an important role in angiogenesis induced by stem cell-like glioma cells [7]. Inhibition of angiogenesis acts synergistically with chemotherapy in reducing the tumor sphere forming ability of brain tumor stem-like cells in glioma xenograft model [8]. Together, these results suggest that the VEGF pathway plays a central role in initiation and progression of glioma, especially in the glioma stem cells.

Bevacizumab is a monoclonal antibody that binds to VEGFA and neutralizes VEGFA from binding to FLT1 and KDR, thereby inhibiting the downstream growth signal that could induce angiongenesis [9]. Indeed, bevacizumab has been shown to be effective in combination with irinotecan for recurrent high grade glioma with a radiographic response noted in around 60% of patients, and a 6-month overall survival of 77% in patients treated with this regimen [10, 11]. Other phase II trials have shown and confirmed that bevacizumab as a single agent or in combination with irinotecan are active and tolerable in patients with recurrent glioblastoma [12, 13]. The Food and Drug Administration in United States approved bevacizumab as a single agent in patients with gliobastoma multiforme (GBM) whose disease had progressed following prior therapy[14]. Recently, the results from a phase II study reported that bevacizumab in combination with lomustine has clinical activity to recurrent GBM [15]. Two studies have assessed the potential of bevacizumab for the treatment of newly diagnosed glioblastoma. Combination of bevacizumab with temozolomide and radiation therapy increased progression-free survival compared to a retrospective control cohort [16], while combination of bevacizumab with other chemotherapeutic agents may improve efficacy in newly diagnosed glioblastoma [17]. The results from two Phase III studies have confirmed that addition of bevaicumab to radiotherapy and chemotherapy led to improvement in progression-free survival but not overall survival [18, 19].

VEGFA, FLT1 and KDR mRNAs are expressed at an elevated level in malignant tumor endothelial compared to normal brain vasculature [20]. Overexpression of VEGFA, but not FLT1, was seen in high-grade astrocytoma compared to low-grade astrocytoma [21], while increased expression of FLT1 was observed in grade 4 diffusely infiltrating astrocytomas [22]. Very recently, a SNP located in the 5' UTR of the VEGFA gene, was demonstrated to be associated with higher plasma VEGFA concentration and a longer progression-free survival in GBM patients treated with bevacizumab [23].

Despite the unquestionable role of angiogenesis in progression of malignancies of the brain, and despite recognition of VEGF pathway-targeting treatment strategies, expression profiling of the VEGF pathway role-players for brain tumor prognostication has not been done. Recently, we demonstrated the prognostic value of combined expression profiling of VEGFA, FLT1 and KDR in lung and colon cancers, in which anti-VEGF therapy has been shown to be effective. In the present study, we aimed to investigate the prognostic significance of these three factors in combination in glioma, whose most malignant subtype, glioblastoma, is susceptible to bevacizumab.

Three glioma patient datasets, GSE4271 [24], GSE4412 [25] and GSE7696 [26] were identified in the Gene Expression Omnibus (GEO) Database; datasets using the HG-U133 microarray platform, and comprising >70 patients for whom survival data were available were included in this study. Microarray gene expression data were retrieved from the data matrixes deposited to the GEO database by the original authors. R scripting was used to extract the expression values from probesets of VEGFA, FLT1 and KDR, and the clinical data from the data matrixes downloaded from GEO as previously described [27].

Since the sample size was small, the three patient cohorts were combined and analyzed together. The combined brain tumor dataset comprised 258 patients, 231 of whose survival data were available. Of these 231 patients, 175 were deceased at data collection. Of the 231 samples, 186 were glioblastoma, and the remaining 45 were of other subtypes. All statistical analyses were performed using SPSS19.0. The associations between expression levels of genes were tested by Chi-Square test. For Kaplan-Meier survival analysis, results were compared by log-rank test. Cox regression analysis was used to correlate the gene expression levels and patient survival.

The prognostic significance of VEGFA, FLT1 and KDR in glioma patients

The association between VEGFA, FLT1 and KDR mRNA expression in brain tumor patients. Histograms showing the percentage of patients whose tumor expressed different levels of (A) VEGFA and FLT1, (B) VEGFA and KDR and (C) FLT1 and KDR. 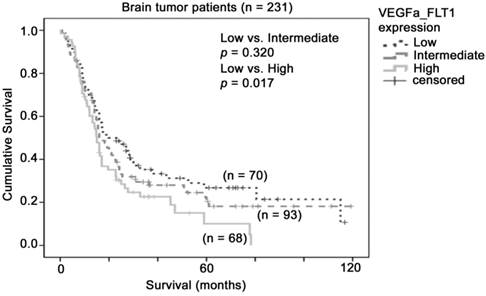 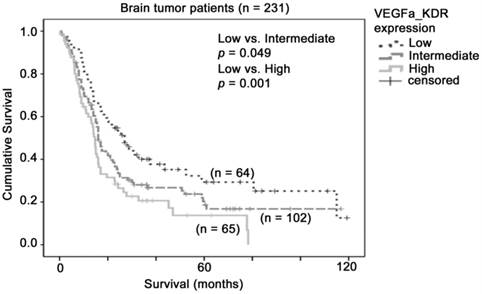 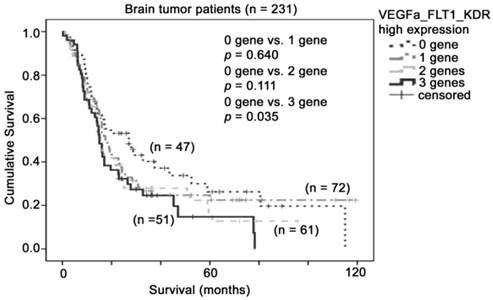 Anti-angiogenesis has been shown to be an effective strategy in treatment of patients with glioblastoma, the most aggressive type of glioma. Previously, we have shown that the co-overexpression of VEGFA and its receptors, FLT1 and KDR, is associated with poor prognosis in both lung and colon cancers [28, 29], malignancies that benefit from anti-angiogenesis therapy. Interestingly, in the present study, we have shown that co-expression of these genes also confers prognostic significance in glioma, suggesting that VEGFA-FLT1-KDR three-gene signature may be a potential prognostic indicator for glioma patients. We previously reported that expression profiling of this three-gene signature could also predict response to bevacizumab in colon cancer patients [29]. Bevacizumab is an anti-angiogenic agent that has also been shown to be effective in glioblastoma patients; as no dataset comprising glioblastoma patients who have received bevacizumab exist in the public domain, and as there is also a lack of success in identification of biomarker for anti-angiogenic agents [30], the value of this three-gene signature for prediction of response to bevacizumab in glioblastoma patients warrants further investigation.

Tumor angiogenesis is a highly dynamic process that is controlled by the interaction between tumor and endothelial cells as well as the tumor microenvironment and is required for tumor growth, invasion, and metastasis [31]. Activation of a cell surface receptor requires the presence of its ligand, however, overexpression of the ligand alone may not be sufficient to drive sufficient signaling to promote cancer progression. Overexpression of a cell surface receptor, such as HER2, has been shown to be sufficient to promote breast cancer progression and predict tumor response to anti-HER2 therapy [32]. In addition, mutation that led to constitutive activation of a cell surface receptor, EGFR, was found to be sufficient to promote lung cancer progression and predict tumor response to EGFR tyrosine kinase inhibitors [33]. In the present report, we have demonstrated the importance of considering the co-overexpression of both the ligand, VEGFA, and its receptors, FLT1 and KDR, in prognosis of glioma patients.

Glioblastoma is a very aggressive subtype of glioma with very short life expectancy and limited treatment options. Although anti-angiogenesis has been shown to be effective in delaying tumor progression in glioblastoma patients, mixed results on other clinical endpoints in phase III trials studying bevacizumab in newly diagnosed glioblastoma patients suggest that not all patients will be benefit from anti-angiogenic therapy [18, 19]. Similarly, mixed results have also been observed in phase III trials in lung [34, 35] and colon cancers [36, 37]. Together with our previous findings in lung and colon cancer patient cohorts [28, 29], our results suggest that this three-gene signature may have clinical application in terms of predicting response towards anti-angiogenic agents in various types of cancer, and that this warrants further clinical evaluation, especially in a prospective trial setting.

Since glioblastoma patients have only limited treatment options, bevacizumab, which has been shown to relieve symptoms related to brain tumor, could be a valuable option to them. However, the clinical use with bevacizumab is still hindered by the lack of a suitable biomarker for identifying a sub-population of patients that could definitely benefit from treatment of bevacizumab. Although we have been unable to determine the anti-angiogenesis response-prediction capacity of this three-gene signature in glioblastoma patients, we have validated its use for predicting patient morbidity, and encourage others who may have access to data on glioblastoma patient response to bevacizumab to test the value of the three-gene signature for predicting response to the therapy.

We would like to thank Omic Science and Technology Ltd. for performing the initial gene analysis in this study. This study was supported by the University of Macau Faculty of Health Sciences Fund, the Start-Up Research Grant (SRG2014-00006-FHS) and the Multi-Year Research Grant (MYRG2015-00065-FHS) to Hang Fai Kwok's research group.