Neoadjuvant chemoradiotherapy followed by total mesorectal excision (TME) has gradually been accepted as the standard treatment for patients with locally advanced rectal cancer. However, controversy remains regarding the peri-operative treatment strategy of patients with stage II rectal cancer, especially in patients with pathological T3N0 (pT3N0) after upfront TME. Due to the varied prognosis of pT3N0 disease, it is critical to define receivable prognostic factors that may help these patients benefit from postoperative adjuvant therapy. Prognostic factors that have been identified in previous studies include carcinoembryonic antigen (CEA), vascular invasion, tumor size, and perineural invasion [1].

Emerging evidence indicates that cancer-associated inflammation plays a key role in the development and survival of a broad range of cancers [2]. Peripheral blood cells might reflect the inflammatory status of patients and the response of patients to malignant tumors, and these cells hold great promise for improving the predictive ability of known prognostic factors. Lymphocytes and monocytes are key immune cells in the inflammatory response and are independently associated with the prognosis of various malignancies, such as breast cancer [3], gastric cancer [4], hepatocellular carcinoma [5], acute lymphoblastic leukemia [6], and lymphoma [7].

Interestingly, a lower pretreatment lymphocyte-monocyte ratio (LMR) is associated with unfavorable prognosis in some hematology malignancies [8,9], although relevant studies in non-hematology malignancies have only been performed recently. Some studies have demonstrated a prognostic role for peripheral LMR at diagnosis in limited cancers, such as soft tissue sarcomas [10] and nasopharyngeal carcinoma [11].

This research was approved by the Ethical Committee of Sun Yat-sen University Cancer Center, and written informed consent was obtained from participants for the use of their clinical records in this study. The study complies with current Chinese law and was performed in accordance with the principles of Declaration of Helsinki.

We conducted a retrospective study on consecutive patients with rectal cancer who underwent curative TME at Sun Yat-sen University Cancer Center between June 2004 and Nov. 2011. The main inclusion criteria were as follows: pathologically proven pT3N0 rectal cancer, complete surgical resection, and no preoperative therapy. Patients were excluded if they died of postoperative complications or with positive margins.

Clinical stage was assessed according to endorectal ultrasound, computed tomography (CT) and magnetic resonance imaging (MRI) examinations. In our cancer center, endorectal ultrasound is recommended for every patient because it provides accurate T staging. Abdominal CT and pelvic CT or MRI are examined routinely. Other tests, such as complete blood count (CBC) and liver function tests were also performed. Tumor stage was based on the 7th edition of the TNM Classification.

Surgical resection was defined as radical when there was no evidence of distant metastases and tumor clearance was both macroscopically and histologically complete. All operations were conducted according to TME principles by colorectal surgeons, and the methods included low anterior resection (LAR) and abdominoperineal resection (AR).

Follow up was performed every 3 months for the first 2 years after treatment and every 6 months thereafter. Evaluations included a CBC, liver function test, serum levels of CEA and CA19-9, physical examination and digital rectal examination at each visit. Chest radiography, CT scanning of the abdomen and pelvis and colonoscopy were conducted every 6 months after surgery. PET/CT is not regularly recommended, although some patients preferred its advantages regarding the early detection of recurrence. Each patient follow-up appointment was recorded in a database.

The primary endpoint of the present study was disease-free survival (DFS), which was defined as the time between operation and failure (including recurrence and/or distant metastasis). All statistical analyses were performed using SPSS software, version 19.0 (SPSS Inc., Chicago, IL, USA). The distributions of LMR were compared using the chi-square test or Fisher's exact test. DFS was analyzed and compared using the Kaplan-Meier method and the log-rank test. Multivariate analysis was performed using Cox proportional hazards regression, and all possible clinical factors were entered in the analysis. A two-tailed P value of <0.05 was considered significant.

In our study, 280 patients were enrolled; the median follow-up period for all patients was 52 months (range, 0.5-106.37 months). The basic clinicopathological characteristics of the patients are presented in Table 1. Fifty patients (17.8%) experienced disease recurrence. Thirty-two patients (11.4%) died after the last follow-up.

Absolute lymphocyte count (ALC) and absolute monocyte count (AMC) at time of initial diagnosis were derived from CBC counts. The distribution of the LMR is shown in Figure 1. The median value of LMR was 3.78, with an inter-quartile range of 2.73-4.82.

Correlations between LMR and clinicopathological factors 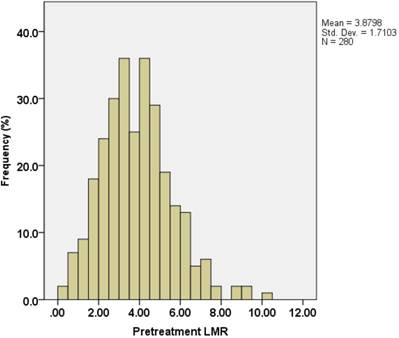 Because the CEA level was not significantly correlated with LMR and both of these factors were significantly associated with DFS in patients with pT3N0 rectal cancer, the patients were divided into four subgroups according to CEA level (elevated vs. normal) and LMR (≥3.78 vs. <3.78). As shown in Figure 3, 22% of the patients with pT3N0 exhibited both elevated CEA and lower LMR before treatment; these patients exhibited lower DFS rates than the other three subgroups (Table 3). The 5-year accumulated disease recurrence rate was approximately 40% for patients with elevated CEA and lower LMR. In contrast, it was approximately 15% for the other three groups. 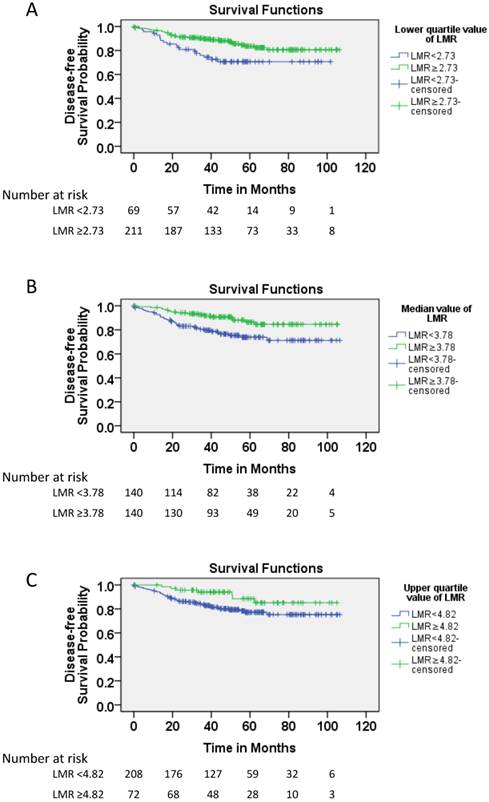 Kaplan-Meier estimates of DFS according to LMR and carcinoembryonic antigen (CEA) level. 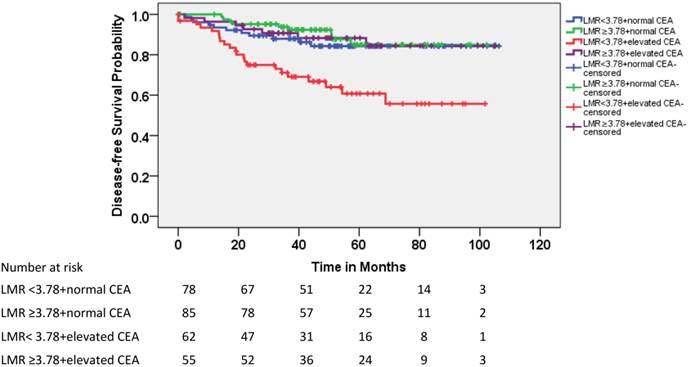 Current guidelines issued by the National Comprehensive Cancer Network recommend that all patients with clinical stage II/III rectal cancer should be treated with preoperative radio-chemotherapy followed by TME. However, whether patients with pT3N0 rectal cancer who received upfront TME should undergo adjuvant therapy remains controversial.

An increasing number of studies suggest a strong link between inflammation and cancer, and the pretreatment of peripheral inflammatory cells, including neutrophils, lymphocytes and monocytes, has been significantly associated with progression and prognosis in various types of cancers.

The peripheral blood lymphocyte count is an important surrogate marker of immunological reconstitution following stem cell transplantation in non-Hodgkin lymphoma, and lymphopenia is a surrogate marker of host immunological incompetence [9]. Lymphopenia prior to the initiation of systemic treatment is a powerful predictor of clinical outcome in hematologic and solid malignancies [12]. Lymphopenia prior to the initiation of systemic treatment is also a poor-risk feature in patients with stage II and III rectal cancer who have been treated with neoadjuvant chemoradiotherapy [13-15]. The induction of programmed cell death, antibody-dependent cellular cytotoxicity, and complement-dependent cytotoxicity play important roles in slowing or preventing disease progression and distant metastasis in rectal cancer [16]. Lymphopenia might impair the efficacy of the immune system by impairing antibody-dependent cell-mediated cytotoxicity due to a lack of effector cells.

Monocyte-associated macrophages might contribute to the suppression of host anti-tumor immunity and the promotion of tumor angiogenesis [17]. Furthermore, monocytes might also provide trophic factors that directly promote the growth and survival of cancer cells [18]. Wilcox et al. have shown that peripheral blood monocytes and their progeny within the tumor microenvironment express the T-cell co-inhibitory ligand B7-H1 (PD-L1), which stimulates the expansion of suppressive regulatory T cells [19]. Monocytes are direct precursors of hematopoietic stem cell-derived macrophages. After recruitment into the tumor tissue, monocytes can differentiate into tumor-associated macrophages, which are an important component of infiltrating inflammatory cells, and might interact with tumor cells to promote tumor development by producing various cytokines and chemokines [20]. Therefore, it is not surprising that peripheral blood monocytosis is an adverse prognostic factor for various tumors [21-25].

Taken together, these findings show for the first time that pre-surgery low peripheral blood LMR predicts unfavorable prognosis in patients with pT3N0 rectal cancer, especially in patients with elevated CEA at initial diagnosis. This biomarker can be derived directly from routine blood cell counts and can easily be applied as a prognostic marker and as an individual treatment index for pT3N0 rectal cancer in the clinical setting. Further studies in a multicenter or prospective manner are warranted.

The authors declare no competing interest.