Could Somatostatin Enhance the Outcomes of Chemotherapeutic Treatment in SCLC?

Purpose: Somatostatin is a peptide with a potent and broad antisecretory action, which makes it an invaluable drug target for the pharmacological management of pituitary adenomas and neuroendocrine tumors. Furthermore, somatostatin (SST) receptors (SSTR1, 2A and B, 3, 4 and 5) belong to the G protein coupled receptor family and are overexpressed in tumors. Since, human small-cell lung cancer overexpresses somatostatin receptors (STTR), they could be legitimate targets for treating SCLC.The aim of this study was the evaluation of cytotoxicity of somatostatin in combination with several anticancer drugs in HTB-175 cell line (Small Cell Lung Cancer Cell line that expresses neuron specific enolase).

Methods: Docetaxel, Paclitaxel, Carboplatin, Cisplatin, Etoposide, Gemzar, Navelbine, Fluorouracil, Farmorubicin are the chemotherapeutic drugs that we used for the combination before and after adding somatostatin in SCLC cell culture. HTB-175 cell line was purchased from ATCC LGC Standards.At indicated time-point, 48h after the combination, cell viability and apoptosis were measured with Annexin V staining by flow cytometry.

Conclusion: Our results indicated that depending on the drug, somatostatin treatment before or after chemotherapeutic drugs increased apoptosis in small cell lung cancer cells. We suggest that long acting somatostatin analogues could be used as additive and maintenance therapy in combination to antineoplastic agents in SCLC patients.

Small cell lung cancer as a very aggressive disease, is characterized by an early relapse, by a tendency towards drug resistance by a high incidence of metastasis and represents approximately 13% of all newly diagnosed lung cancers [1, 2]. Despite the developments in diagnosis and treatment of lung cancer, in regard to SCLC there is no clear evidencethat any current chemotherapeutic or biological agent significantly improves response or survival. Currently, the median survival of patients with limited disease is 14-16 months, and 8-11 months for those with extensive disease, with 20-40% of patients with limited disease and 5% of patients with extensive disease alive at 2 years [1].Therefore, there is an imperative need for a novel approach for the management of SCLC.

In specific, somatostatin, (somatotropine release inhibiting factor, SRIF) is a regulatory-inhibitory peptide with exocrine, endocrine, paracrine and autocrine activity [3]. Many scientists have characterized somatostatin as the universal endocrine off switch [1]. A commentary has summarized the effects of somatostatin on cancer cells through different mechanisms, including: (a) normal endocrine activity via the GH-IGF1 axis, (b) inhibition of angiogenesis, (c) modulation of the immune response to tumor cells and (d) direct antiproliferative effect signaling on tumor cells via somatostatin receptors [6] due to either cell cycle arrest or induction of apoptosis [4]. It is known that somatostatin analogues inhibit in vitro cell proliferation via specific membrane receptors (SSTRs). Currently, two somatostatin analogues octreotide and lanreotide, are successfully used clinically for the treatment of acromegaly and gastroenteropancre-atic endocrine tumors [5, 6]. These analogues bind preferentially to SSTR 2 and SSTR 5 with moderate affinity for SSTR 3 and low affinities for SSTR 1 and SSTR 4 [7, 8].

Besides, somatostatin receptor scintigraphycan be used to visualize primary tumours and metastases [9, 10].In addition, somatostatin analogues labeled with111indium, after appropriate modifications can be used as a vehicle of either chemotherapeutic or radioactive agents for the treatment of SSTRs positive tumors [11]. Furthermore, radiolabelled somatostatin analogues have been tested as a single therapy for SCLC, but this has not been as promising as predicted, based on preclinical study results [12-14]. However, the number of clinical studies and the number of patients in those studies have been relatively limited, and the treatment protocol was not optimized for those patients [15,16].

Recently, a clinical phase II/III study by Zarogoulidis et al compared the survival, feasibility and toxicity between patients that were treated with chemotherapy (CHT) alone (Group A - control group), with CHT plus 30 mg lanreotide (somatuline®, IPSEN) (Group B) and with CHT plus 60 mg lanreotide (somatuline® auto-gel) (Group C), favoring these combinations and suggesting further research in targeted therapy and in downstream signaling events within cancer cells [3].

The aim of this study was the evaluation of cytotoxicity of somatostatin in combination with several anticancer drugs in a Small Cell Lung Cancer Cell line that expresses neuron specific enolase.

NCI-H82 [H82] (ATCC® HTB-175™) was purchased from ATCC LGC Standards.HTB-175 cell line was isolated from a 40-year-old male (http://www.lgcstandards-atcc.org). This line is a biochemical and morphological variant of SCLC that expresses neuron specific enolase that aggregates in suspension. The cells grow in very large aggregates, and the aggregates are the only viable cell population. HTB-175 cells were cultured in Dulbecco's Modified Eagle's Medium (DMEM) culture medium (ATCC-30-2001) supplemented with 10% Fetal Bovine Serum (FBS) (Biochrom S0115). They were incubated at 37°C in a humidified atmosphere containing 5% CO2. Cell lines were cultured in Coming's tissue culture flasks (25, 75, 225 cm2) according to the manufacturer's protocol. After cultures reached confluence, by microscope observation were then subcultured. At indicated time-point. 48h after somatostatin treatment, apoptosis was measured.

Protocol of the experiment.

Analysis of the apoptotic cells with ANNEXIN V/ PI

Annexin V staining is used as a probe to detect cells that have expressed phosphatidylserine (PS) on the cell surface, an event found in apoptosis as well as other forms of cell death. Propidium iodide (PI) is used as a DNA stain for both flow cytometry, to evaluate cell viability or DNA content in cell cycle analysis [17], and microscopy to visualize the nucleusand other DNA containing organelles. It can be usedto differentiate necrotic, apoptotic and normal cells. The Annexin V kit used in this study was purchased from ImmunostepCompany (Spain) and the analyses of the samples were performed in BD FACSCalibur 4colors, with CELLQUEST software (BECTON-DICKINSON USA). After the 48h incubation of somatostatin, cells were collected by centrifuge for 3 min in 1.100rpm. 100 ul of cell suspension (concentration 3000 to 5000 cells/ uL) were added to 500 uL of Annexin binding buffer. Then 5 uL of Annexin V and 5 uL PI were added to this solution and it was incubated for 15 min in a dark place at room temperature. Then it was analyzed in the flow cytometer (Table 1, Table 2, and Figure 1).

Although some evidence supports the antitumor effects of somatostatin (SRIF) and related agonists, the available data in SCLC model systems and clinical studies are few, conflicting and not conclusive.

The National Comprehensive Cancer Network practice guidelines for the first-line treatment of SCLC named the etoposide-cisplatin (EC) regimen as the treatment of choice to be used concurrently with radiotherapy [18-21]. Platinum analogues (carboplatin, cisplatin) plus etoposide has been the standard chemotherapy for SCLC for decades. Alternatively, taxanes (paclitaxel and docetaxel) and platinum analogues include other treatment strategy. Furthermore, farmorubicin, and Vinca alkaloids are chemotherapeutic agents used in combination with other drugs in the treatment of SCLC. Currently, a Vinca alkaloid agent is Navelbine. In our study we combined several agents with somatostatin. The results revealed that depending on the drug, some induce apoptosis more when they are added before somatostatin (docetaxel, paclitaxel, gemzar, cisplatin) and some after (etoposide). This could be propably explained by a direct antiproliferative effect of somatostatin analogues that might enhance chemotherapy activity or by an immunoregulatory activity of somatostatin analogues on tumor cells [22].

Cell viability and apoptosis with Annexin V/PI by flow cytometry 48h after somatostatin was added.

Cell viability and apoptosis with Annexin V/PI by flow cytometry. 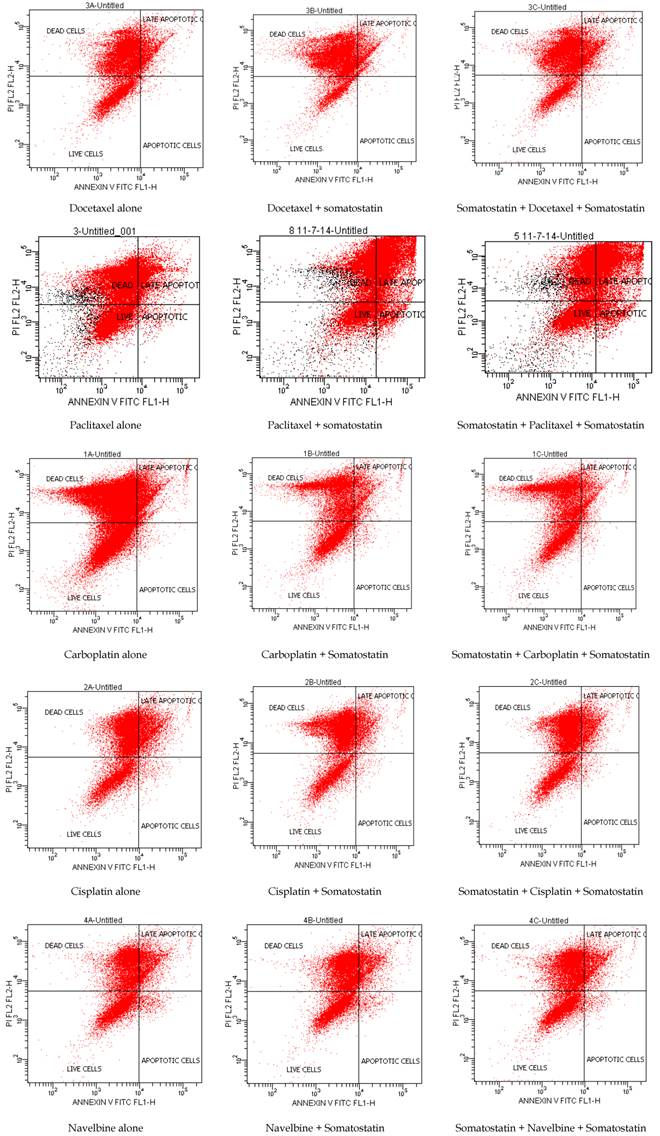 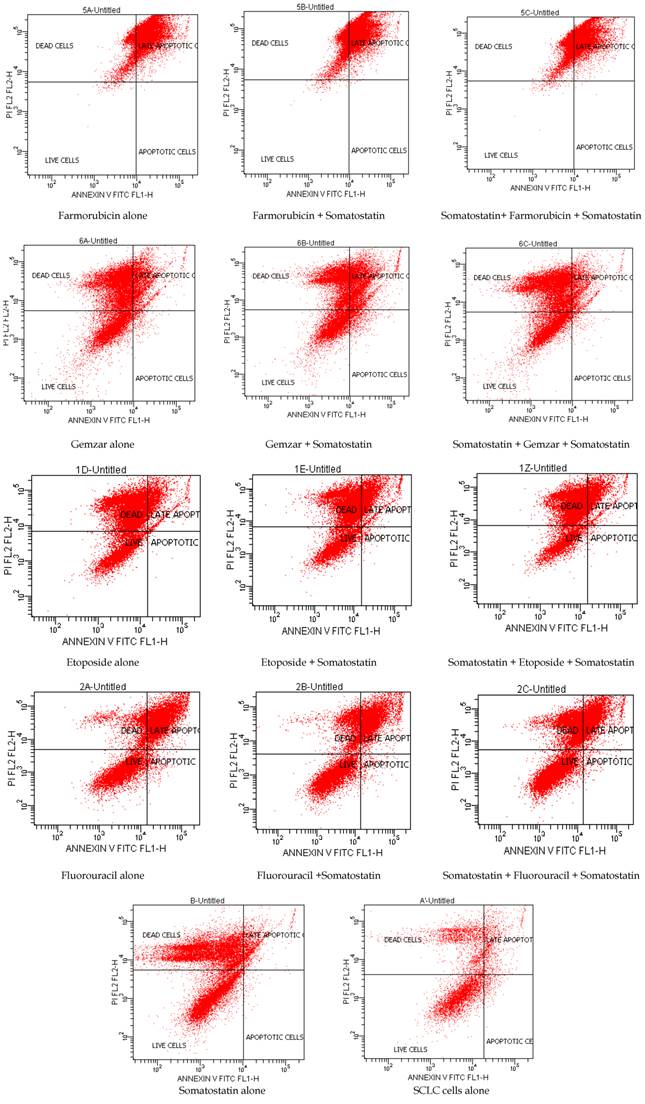 Cell viability and apoptosis with Annexin V/PI by flow cytometry in control flasks.

Similarly, in vitro studies with somatostatin analogues such as lanreotide suggest that lanreotide given alone or in combination with cisplatin could have a therapeutic potential in the treatment of somatostatin receptor positive SCLC patients [23]. However, Hu et al reported that in gastric cancer cells that expressed SSTR3, octreotide could be effective in inhibiting cell growth and inducing cell apoptosis through mediation of SSTR3 [24].

As chemotherapy affects the immunedefense system of the host, Zarogoulidis et al suggested that somatostatin treatment combination might enhance the capability of the SCLC patient to repair their immune system between chemotherapy cycles. On the other hand they concluded that lanreotide stimulation for a longer period (>2 weeks) seems to influence proliferation by delaying cell division that tumor cells are less sensitive to chemotherapy (resistant). Although somatostatin and its analogs hold promise as new agents in cancer treatment, there are limitations [8, 25].

However, recent research studies [26-28] have yielded important clinical benefits and promising therapeutic interventions with targeted therapies, but research is needed in targeted therapy and downstream signaling events within cancer cells. Successful targeted treatments mean better understanding of the signaling process of cancer receptors pathways, resulting in fewer side effects and increase of survival benefit. The better we understand the pathways through which the targeted therapies work (such as involved signaling pathways and their interrelationships), the better we will understand the potential of the targeted therapies. Thus, much work needs to be done to discern which somatostatin analog(s) preferentially bind which SSTR subtype(s) to be effective against which cancer(s) by which mechanism(s).

18. Murray N, Turrisi AT 3rd. A review of first-line treatment for small-cell lung cancer. Journal of thoracic oncology: official publication of the International Association for the Study of Lung Cancer. 2006;1:270-8

25. Hejna M, Schmidinger M, Raderer M. The clinical role of somatostatin analogues as antineoplastic agents: much ado about nothing?. Annals of oncology: official journal of the European Society for Medical Oncology / ESMO. 2002;13:653-68