Could GLUT12 be a Potential Therapeutic Target in Cancer Treatment? A Preliminary Report

Background: Recent studies proposed GLUT12 to be a major glucose transporter involved in the glycolytic metabolism of cancer cells.

Methods: GLUT12 expression was determined by immunohistochemistry in a selection of cancer cell lines and a tumour spheroid model.

Conclusion: The data supports the involvement of GLUT12 in the glycolytic metabolism of cancer cells and therefore, its potential as a novel therapeutic target for cancer treatment.

Cancer cells are characterised by uncontrolled proliferation and accelerated cellular metabolism. As a consequence, these cells have a high ATP demand that is satisfied by increased glucose uptake. In addition, a state where cancer cells inherently favour aerobic glycolysis rather than aerobic respiration has been widely described [1]. This results in an increased demand for ATP because in glycolysis, ATP production from glucose is considerably lower than that produced during oxidative phosphorylation in aerobic respiration. The first rate-limiting step for ATP production through glucose metabolism is the transport of glucose across the plasma membrane of the cell via the facilitative sugar transporters (GLUTs).

The GLUT/SLC2A family of transporters is comprised by 14 isoforms, which are divided into 3 different classes according to their sequence homology [2]. The diverse GLUT isoforms are distributed within the body according to their distinct functional properties to allow the appropriate distribution of the whole-body glucose [2]. Due to high glucose demand, most cancer cells overexpress one or more of the GLUTs. These GLUTs may or may not be present in the respective tissue of origin under non-cancer conditions. Altered expression of GLUTs 1-5 has been reported in many tumours such as hepatic (GLUT1, -2, -5) [3-5], pancreatic (GLUT1) [3], breast (GLUT1, -2, -4) [3-5], lung (GLUT5) [4], digestive (GLUT2, -4, -5) [4, 6, 7], reproductive tract (GLUT5) [4] and lymphomas (GLUT5) [5]. GLUT1 expression, in particular, has been shown to have a close relationship with tumour development and with unfavourable prognosis [4, 7]. GLUT1 and GLUT3 are also known to be up regulated in tumours and normal tissues by hypoxia [4, 8, 9].

GLUT12 belongs to the Class III of GLUT transporters family. It was cloned from the human breast adenocarcinoma cell line MCF-7 by its homology with GLUT4 [10]. GLUT12 transports 2-deoxy-glucose glucose, fructose and galactose, and it has been proposed that could work as a proton coupled symporter [10]. GLUT12 protein is expressed in adipose tissue and skeletal muscle, where seems to work as an insulin sensitive transporter, and it is also found in small intestine and placenta [10]. In tumour tissues, GLUT12 has been found in human breast tumours [10], human prostate carcinoma and the prostate adenocarcinoma cell line LNCaP [10], oligodendrogliomas, oligoastrocytomas and astrocytomas [11]. Interestingly, a recent study has shown that p53 transcription factor, a tumour glycolytic metabolism inhibitor, specifically represses GLUT12 and GLUT1 expression, suggesting that both transporters could be the main glucose transporters involved in the glycolytic metabolism characteristic of human cancer [12].

The aim of this study was twofold. Firstly, to determine the expression of GLUT12 in a range of tumour cell lines in which expression in the corresponding non-malignant tissue has not been reported. Secondly, to investigate whether GLUT12 expression might, like GLUT1, be induced under hypoxic conditions.

HT29 cells were seeded into T75 flasks, previously coated with agarose gel (0.5% w/v). Cells were then cultured under normoxic conditions for approximately 10 days until cell spheroids were becoming visible to the naked eye. Spheroids of approximately equal sizes were selected and cultured on for a further 10 days in a magnetic spinner flask in RPMI-1640 (HEPES modification) supplemented with 10% FBS until fully formed.

Cell monolayers were harvested with trypsin/EDTA solution followed by centrifugation (2000g, 4oC, 10 minutes). Cell pellets were washed with phosphate buffered saline (PBS) before fixation overnight in 4% formalin buffered saline (4oC). The spheroids were washed in PBS and also fixed overnight. After fixation, the cells and spheroids were processed through to wax and sectioned (5µM) then mounted onto glass slides. For immunohistochemical detection of GLUT-12, sections were de-waxed and rehydrated. Endogenous peroxidase activity was inhibited with 3% H2O2 in Tris-buffered saline (TBS) (20 minutes) before antigen retrieval was carried out (10mM citric acid, 0.5% Tween-20 in TBS (TBS-T) (pH6.0) at 100oC for 20 minutes). Sections were blocked with 5% bovine serum albumin (BSA) in TBS-T (20 minutes). Sections were then incubated in rabbit anti-GLUT12 polyclonal antibody (1:200), (bs-2540R, Bioss, Woburn, MA, USA) [13] or GLUT1 (1:100) (GT12-A, ADI, San Antonio, TX, USA) overnight at 4ºC or incubated in TBS-T as a negative control. Sections were then washed in TBS-T before 2oAb treatment (anti-rabbit IgG-HRP (Dako, Carpinteria, USA) room temperature for 1 hour). The sections were again washed then peroxidase activity was detected using 3´-3´-diaminobenzidine tetrahydrochloride before counter-staining with Haematoxylin.

In non-malignant tissue, GLUT12 protein is detectable under normal physiological conditions in human skeletal muscle, adipose tissue and small intestine, but not in brain, liver or kidney. GLUT12 mRNA has been found in the myocardium, skeletal muscle and prostate, and at low levels in the brain and kidney, but GLUT12 mRNA has not been detected in the lung or colon [14]. Rogers et al (2002) also reported breast cancer cell line MCF-7 to be positive for GLUT12. Our work confirms this and the specificity of the antibody by the intense GLUT12 cytoplasmic and nuclear staining in the MCF-7 cell pellet sections (Figure 1).

Interestingly, expression of GLUT12 mRNA was detected in different subtypes of human renal tumours [15], human colon carcinoma (HCT116), osteosarcoma (U20S and Saos-2) and non-small cell lung carcinoma (H1299) cell lines [12]. Based on these data, we decided to investigate GLUT12 expression in a range of human cancer cell lines derived from tissues that have not been reported to express GLUT12 protein in their non-malignant state. Figure 1 shows that GLUT12 was highly expressed in the lung adenocarcinoma (A549) and paediatric rhabdomyosarcoma (RH-36) cell lines, whereas its expression was relatively low in the colorectal adenocarcinoma (HT29) cell line and undetectable in the neuroblastoma (NB-EB) cell line. Altered protein expression has been widely observed in tumours and this has been demonstrated with other members of the GLUT family. For example, GLUT3 protein is expressed in lung, ovarian, and gastric cancers but not in the corresponding normal tissues [16]. Similarly, GLUT5 expression has been reported in human breast cancer cells, but not in normal breast tissue [17]. GLUT12 is widely expressed in rat foetus, human placenta and in foetal human term membrane [18-20], and foetal tissue, like tumour tissue, has high glucose requirements. The fact that GLUT12 is found in foetal tissues and in some cancer cell lines, but not in the corresponding normal tissues, suggests a specific role for GLUT12 in response to particular metabolic needs. This supports the proposal by Zawacka-Pankau et al. (2011) that GLUT12 is a major glucose transporter involved in glycolytic metabolism of cancer cells. We did not detect GLUT12 expression in the neuroblastoma (NB-EB) cell line, indicating that GLUT12 may not necessarily be expressed in all cancer cell lines or tumours. Since GLUT12 expression has been related to foetal tissues and the NB-EB cell line is derived from embryological cancer, GLUT12 expression could have been down regulated during tumour genesis. However, further work is necessary to address this question. 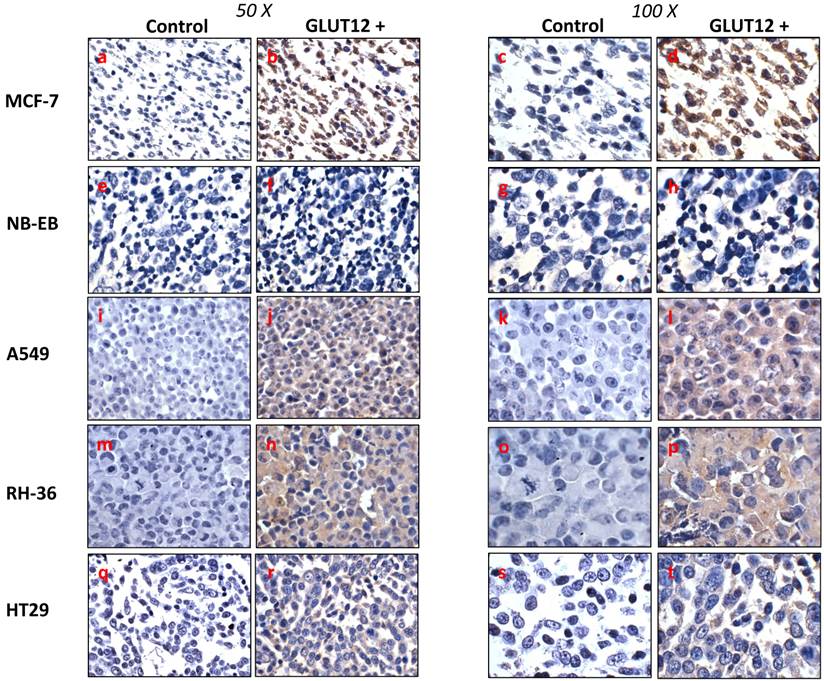 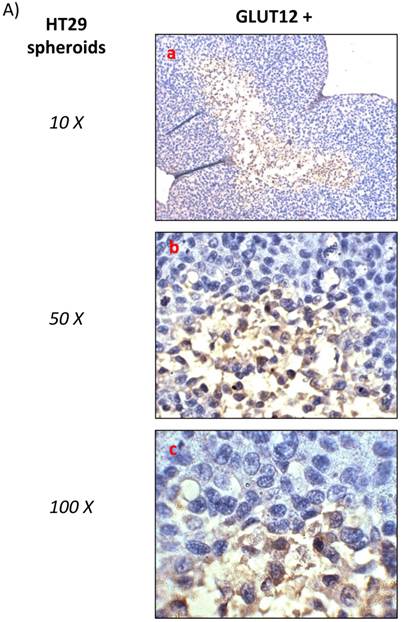 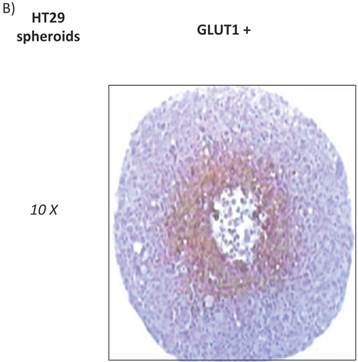 HT29 cells have the capacity to form spheroids when grown under certain conditions. Cell spheroids are spherically symmetric aggregates of cells, which have been widely used as in vitro model for the study of tumour response to therapy [21]. In the peripheral layers of the spheroid, cells are proliferating; deeper cells are quiescent and characterised by hypoxia, low glucose and ATP production, lactate accumulation, and induction of cellular apoptosis/necrosis [22]. According to our results, low expression of GLUT12 was found in HT29 cell monolayers (Figure 1, q-t) and high expression in the hypoxic centre of the HT29 spheroids (Figure 2A). Interestingly, we also found that GLUT1 showed a similar pattern of expression in HT29 spheroids (Figure 2B). It might be hypothesised that increased GLUT12 expression, like GLUT1, is involved in cancer cell glycolysis and inducible by hypoxia.

The p53 transcription factor, a tumour glycolytic metabolism inhibitor, specifically represses GLUT12 and GLUT1 expression [12]. Further, p53 expression has been found to be low in MCF-7, A549 [23] and RH-36 cell lines [24], but high in neuroblastoma and HT-29 cell lines [23, 25]. Our results offer further evidence that in cell lines with low levels of p53, there would be a correlation with high expression levels of GLUT12 and vice versa. This observation excepts HT-29 cells, which we found to express GLUT12 despite reports of high levels of p53. However, this cell line, in contrast to the other cell lines analysed, expresses mutant p53, which will be inactive and abolish any suppressive effect on GLUT-12 expression [23].

In summary, GLUT12 expression in certain tissues seems to be related to cancer development and hypoxia as well as to the characteristic glycolytic metabolism observed in malignant cells. This effect may be mediated via a p53-dependent mechanism, where down-regulation of GLUT-12 could be an important tumour suppressor. This warrants further studies to validate GLUT12 as a therapeutic target for novel anticancer treatment.

All authors disclose any actual or potential conflict of interest including any financial, personal or other relationships with other people or organizations that could inappropriately influence this work.