Center of General Surgery, the People's Liberation Army General Hospital of Chengdu Command, Chengdu 610083, Sichuan Province, China.
*These authors have made equal contributions for this study.

Obese gastric cancer patients exhibit the large accumulation and abnormal distribution of abdominal fat; these characteristics seriously affect the exposure of the operative field. In addition, perivascular fat parcels and lipid deposition on vascular walls lead to increased vascular fragility; as a result, slight stretching of blood vessels can easily lead to vascular rupture and bleeding, which severely affect the surgical process and increase surgical difficulty and risk. Furthermore, obesity is frequently associated with many cardiopulmonary and other chronic diseases that decrease operational tolerance [1]. Therefore, many scholars believe that caution is required with respect to the use of laparoscopic surgery for obese patients [2, 3]. However, laparoscopic-assisted D2 radical gastrectomy (LAG) has become a standard procedure for the radical treatment of advanced gastric cancer because of its unmatched advantages [4, 5]. In recent years, many scholars have continued to investigate the use of LAG for obese gastric cancer patients and have obtained preliminary results [6, 7]. However, the application of laparoscopic techniques among obese gastric cancer patients still faces the following bottlenecks. (1) It is difficult to expose the operative field, the control of bleeding is challenging, and operation times are lengthy [8]. (2) Laparoscopic surgeries are extremely difficult and risky, with a tortuous learning curve [9, 10]; these issues severely affect the enthusiasm of surgeons for performing these operations.

To overcome the aforementioned technical bottlenecks, we have drawn upon the advantages of radical hand-assisted laparoscopic surgery for colon cancer [11] to perform hand-assisted laparoscopic D2 radical gastrectomy (HALG) and have developed the unique “three-step HALG method”. To more thoroughly elucidate the advantages of the “three-step HALG method”, in this study, systematic retrospective analyses of clinical data from obese gastric cancer patients who received HALG, LAG, and open D2 radical gastrectomy (OG) at our center during a particular time period were conducted, and the relevant findings were summarized.

General information D2 radical gastrectomy was performed in 270 cases involving obese gastric cancer patients at our center between July 2008 and December 2013. HALG, LAG, and OG were performed in 54, 51, and 165 of these cases, respectively. According to the standards established by the World Health Organization for Asian obese patients in 2003[12] and the surgical treatment guidelines for Chinese obese patients in 2007[13], obesity is defined as a body mass index (BMI) ≥25 kg/m2. A study design of a non-randomized controlled trial during the examined time period was adopted for this investigation, with surgical methods chosen based on the condition and wishes of each patient. The following case inclusion criteria were utilized: (1) there was a definite preoperative pathological diagnosis; (2) distal metastasis was excluded by preoperative auxiliary examinations, the tumor had not directly invaded adjacent organs, and complete resection of the tumor appeared to be feasible; and (3) R0 resection was confirmed by postoperative pathological examination. Cases were excluded if intraoperative findings revealed peritoneal dissemination of the tumor or if D2 radical surgery could not be definitively completed. General information includes patients' ages, genders, BMI values, American Society of Anesthesiologists (ASA) physical status classifications[14], major associated underlying preoperative diseases (hypertension, pulmonary insufficiency, or diabetes mellitus), history of abdominal surgery, tumor sizes, tumor-node-metastasis (TNM) stages, and rates of conversion to laparotomy. All surgeries were completed by highly qualified specialists who possessed extensive clinical experience. The same postoperative treatment principles and discharge criteria were applied for all patients.

Surgical methods Tumor stages were determined based on abdominal exploration. The dissection of lymph nodes in the perigastric region and D2 radical gastrectomy were performed in accordance with the Japanese publication “Gastric cancer treatment protocols”. Conventional OG and LAG were mature and well-established surgical procedures (Fig.1 E, F). The “three-step HALG method” was divided into three steps (Fig.1 A~D): hand-assisted incision surgeries under direct vision, hand-assisted laparoscopic surgeries, and digestive tract reconstruction. The specific surgical procedures and our preliminary work have been published in Surgical Endoscopy [15].

The SPSS16.0 software package was used for statistical analyses. Measurement data were expressed as means±standard deviations and were analyzed by one-way analysis of variance (ANOVA), and pairwise comparisons between groups were performed with LSD method. Count data were assessed using χ2 tests. P <0.05 was adopted as the threshold for significance in statistical analyses. 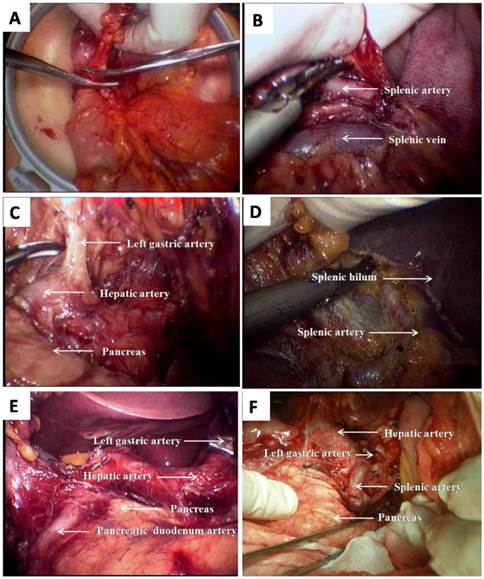 The comparison of general data.

The comparison of intraoperative data.

The comparison of postoperative data.

In the HALG, LAG, and OG groups, there were 2, 2, and 8 cases, respectively, of patients who were readmitted within 30 days of the surgery; such cases accounted for 3.77%, 4.65%, and 4.85% of the cases in each respective group (P =0.95). In the HALG group, 1 patient was readmitted due to intestinal adhesion, and 1 patient was readmitted due to abdominal distention after eating. After these 2 patients received 2-5 days of treatment, all of their symptoms had been relieved, and the patients were discharged. There were no postoperative deaths in either the HALG or the LAG groups, whereas there were 2 cases of postoperative death in the OG group (with such cases accounting for 1.21% of this group). One patient died due to the failure of cardiopulmonary function, and the other patient, who was in poor general condition, died of abdominal infection caused by poor drainage from a gastrointestinal fistula. P =0.56 for a comparison of postoperative deaths among the experimental groups.

Laparoscopic techniques have produced positive outcomes for the radical treatment of obese gastric cancer patients, however, the following shortcomings continue to limit the use of laparoscopic approach: (1) laparoscopic approaches involve prolonged operation times, resulting in fatigue among surgeons and a tortuous learning curve for these techniques[8-10]; (2) the effects of radical laparoscopic surgery have been questioned[17]; and (3) prolonged pneumoperitoneum aggravates cardiopulmonary burdens, leading to increased perioperative cardiopulmonary complications[18,19]. To realize the advantages but avoid the disadvantages of laparotomies and laparoscopies, we developed the unique “three-step HALG method”. Through systematic retrospective analyses and summarization of the clinical data from all patients of this study, we believe that the “three-step HALG method” has unique advantages for obese gastric cancer patients and is an extremely viable option for the surgical treatment of these patients.

The laparoscopic procedures of LAG surgery can be unusually difficult in cases involving obese patients because the greater omentum occupies a large volume of space in the upper abdomen [8]. However, HALG begins by creating an incision below the xiphoid process. This incision not only is used for hand-assisted laparoscopic operations, tissue removal, and digestive tract reconstruction but also provides the unique advantage of enabling partial tissue separation and perigastric lymph node dissection to be completed under direct vision. The incision created using a hand-assisted device with a blue butterfly base can fully expose the local operative field. First, the transverse colon and the greater omentum are lifted outside the incision; the greater omentum is then fully freed and removed and this removal allows for the fuller and clearer exposure of the operative field under direct vision. The surgery continues by freeing the anterior lobe of the transverse mesocolon, part of the pancreatic capsule, and the duodenal bulb. Dissection is then performed on the lymph nodes in groups 5, 6, 12a, and 14v and a portion of the lymph nodes in group 8a.This approach greatly reduce pneumoperitoneum and laparoscopic operation time.

When completed the first step, the upper abdominal space is largely released and surgeons can more freely conduct left hand-assisted operations in the second step of the surgery. Surgeon can use the sensitive direct touch of the left hand and can achieve separation with the assistance of ultrasonic scalpels; as a result, the separation of major blood vessels and lymph node dissection can be more easily accomplished. During LAG surgery, the dissection of the lymph nodes in groups 7, 8, 9, 10, and 11p presents operational difficulties[20-22]. During the HALG surgery, the assisting hand fully exposes the operative field, and the thumb and index finger can directly touch and protect major blood vessels and tissues wrapped in fat tissue, providing important advantages in the dissection of the region from the lesser curvature of the stomach and the splenic artery to the splenic hilum and the gastric cardia. Therefore, there is significantly less difficulty and risk involved in the surgical procedure for HALG than for LAG.

The thoroughness of radical treatment for the “three-step HALG method”

The number of dissected perigastric lymph nodes is an important criterion for measuring the thoroughness of radical treatment [23, 24]. In this study, the number of dissected lymph nodes was smaller than that in previous studies [25], which were possible associated with that the other authors used lymphatic tracer during surgery, or our way of harvested lymph nodes from specimen need to be improved. In this study, similar numbers of lymph nodes were recovered for both the HALG and OG groups (P =0.21). The number of lymph nodes recovered for the LAG group was 3 nodes fewer than that for the HALG group (P =0.00). Therefore, we believe that the HALG approach was more thorough than the LAG approach. The reasons maybe as follow: the lymph node groups 6, 7, 8a, 9, 10, and 11 are in close proximity to major blood vessels which are encapsulated by fat tissues, and severe unexpected injuries can readily occur during lymph node dissection; therefore, significant difficulties will accompany with LAG surgery [20-22]. In HALG surgery, dissection of lymph nodes in group 6 and a portion of 8a can be conducted under direct vision. In addition, during the laparoscopic portion of the HALG surgery, the tactile, exposure, and protection roles of the hands can be completely fulfilled; therefore, the separation and cutting functions of ultrasonic scalpels can be fully realized, and the complexity of surgical procedures can be significantly reduced. As a result, relatively thorough lymph node dissection can be achieved.

The minimal invasiveness for the “three-step HALG method”

The safety for the “three-step HALG method”

The disturbance, traction and the compression of the thoracic cavity by pneumoperitoneum during surgery are the important elements of trauma [28]. Studies have demonstrated that trauma is closely associated with the stability of the internal environment [29, 30]. Obese patients suffer from many underlying diseases and exhibit reduced cardiopulmonary function and operational tolerance; thus, their internal environment is relatively sensitive to trauma [31]. In this study, HALG significantly shorten pneumoperitoneum time. Therefore, HALG is a relatively safe surgical approach. (1) The rates of unexpected intraoperative injuries in the HALG and OG groups were markedly lower than that in the LAG group. (2) The rate of complications in the HALG group was significantly lower than that in the LAG and OG groups (P =0.049). In-depth analyses revealed that the percentage of cases involving postoperative cardiopulmonary complications was significantly lower for the HALG group than that for the LAG group (P =0.00). (3) There was one case of conversion to laparotomy in the HALG group; which was markedly lower than the corresponding percentage for the LAG group (P =0.03). These results indicated that the assisting hand in the HALG surgery played important roles in protecting, dissecting, and separating critical fat-encapsulated structures, resulting in better control of surgery-related injury. (4) There were no significant differences among the experimental groups with respect to quantity of blood lost, reoperation rate, or readmission rate within 30 days after surgery (P >0.05).

BMI: obesity is defined as a body mass index

30. Ross C, Byard RW, Langlois NE. Does the intensity of the inflammatory reaction in a bruise depend on its proximity to the site of trauma?. Forensic Sci Med Pathol. 2013;9:358-62