Despite previous reports on 22 miRNAs that are differentially expressed by melatonin treatment in breast cancer cells (23) and EPACs/miRNA-124/Egr1 pathways in neurodegenerative diseases (24), the roles of miRNAs and the anti-angiogenic properties of melatonin remain unclear. In the present study, we examined the profile of differentially expressed miRNAs using a miRNA array in melatonin-treated PC-3 cells and explored the roles of miRNA3195, the most highly upregulated miRNA, and miRNA374b, a predictive biomarker for prostate cancer (25), in the anti-angiogenic activity of melatonin in PC-3 prostate cancer cells using two miRNA overexpression mimics. We demonstrate that melatonin exerts anti-angiogenic activity by upregulating miRNA3195 and miRNA 374b in PC-3 prostate cancer cells under hypoxia.

For the hypoxic stress, the PC-3 cells in the absence or presence of 1mM melatonin were cultured for 4 h under an anaerobic chamber (Forma Scientific, OH, USA) with a humidified atmosphere of 2% O2 and 5% CO2 balanced with N2.

The miRNA mimics (200 nM) of miRNA2190, miRNA3195 and miRNA 374b and antisense oligonucleotides (50 nM) against miRNA3195 and miRNA were transfected into PC-3 cells using lipofetamine 2000 (Invitrogen, Carlsbad, CA, USA) reagent according to the manufacture's protocol. Two days or three days after transfection, PC-3 cells were collected for RNA isolation or Protein expression.

Isolation and expression of miRNA

Total RNA from PC-3 cells in the absence or presence of melatonin (1mM) (Sigma, St. Louis, MO, USA) under hypoxia was isolated by QIAzol (Invitrogen). One microgram of total RNA was used to make cDNA using GenoExplorer TM miRNA cDNA kit (GenoSensor Corporation, Arizona, USA) according to the manufacture's protocol. To determine the expression of miRNAs, qRT-PCR was performed with the LightCycler TM instrument (Roche Applied Sciences, Indianapolis, USA). miRNA primers were purchased from GenoExplorer TM (GenoSensor Corporation, Arizona, USA). U6 or RNU44 was used to normalize the expression of interesting miRNAs.

Total RNA was extracted from the PC-3 cells in the presence or absence of 1mM melatonin under hypoxia by QIAzol (Invitrogen). For analysis of miRNA expression profile, total RNA sample (100 ng) was labeled with Cyanine 3-pGp (Cy3) using the Agilent miRNA Complete Labeling and Hyb kit (Agilent Technologies, Foster City, CA, USA). The sample was placed on an Agilent Human miRNA v14 (AMDID 026867) and covered by a Gasket slide (Agilent Technologies). Slides were hybridized for 16 h at 42°C in the Agilent hybridization system. Hybridized slides were washed in the first wash buffer (0.0005% Triton X-102) for 5 min and the second wash buffer for 5 min. After the washing steps, the slides were dried by centrifugation at 900 g at room temperature. Data were obtained as a median of replicated fluorescent signal measurements of the same miRNA from each slide. Slides were analyzed using Exiqon's protocol. Normalization included background subtractions with a global LOWESS regression algorithm. Spots were flagged and analyzed for signal quality (empty spot, spot signal less than background, less than optimal spot morphology, or saturated spot).

Two days after transfection with miRNA3195 and miRNA374b in PC-3 cells, a plastic pipette tip was used to scrape a line between PC-3 cells~ 2 to 3 mm wide. The migratory activity of PC-3 cells was evaluated in the miRNA negative control or miRNA mimics. After incubation for 24 h, the PC-3 cells were stained with Diff-Quick solution II (Sysmex CO., Japan). Randomly chosen fields were photographed under an Axiovert S 100 light microscope (Carl Zeiss, Weimar, Germany) at × 100 magnification, and the migrated cells were counted.

A quantitative real-time PCR was used to detect the expression and the quantification of the targeted molecules such as HIF-1 alpha, HIF-2 alpha and VEGF in 1 mM melatonin-treated PC-3 cells transfected by miRNA3195 and miRNA374b under hypoxia or normoxia. 1 μg of total RNA was used to construct the template cDNA with reverse transcription kit (Promega, WI, USA). To amplify the reaction of DNA, RT-qPCR was used with the LightCycler TM instrument (Roche Applied Sciences, Indianapolis, USA) according to the manufacture's protocol. The mRNA level of GAPDH was used to normalize the expression of genes of interest. All reactions were carried out twice, and the final analysis was based on the mean of the reactions. The primers used to be as follows: HIF-1 alpha forward primer 5'-CTGCCACCACTGATGAATTA-3', reverse primer 5'-GTATGTGGGTAGGAGATGGA-3', HIF-2 alpha forward primer 5'GCGCTAGACTCCGAGAACAT-3',reserve primer 5'-TGGCCACTTACTACCTGACCCTT-3', VEGF forward primer 5'-CCAGCAGAAAGAGGAAAGAGGTAG-3', reverse primer 5'-CCCCAAAAGCAGGTCACTCAC-3'; GAPDH forward primer: 5′-CCA CTC CTC CAC CTT TGA C-3′, reverse primer: 5′-ACC CTG TTG CTG TAG CCA-3′.

Vascular endothelial growth factor (VEGF) level from the supernatant of PC-3 cells transfected by control, miRNA374b or miRNA3196 mimics or miRNA inhibitors against miRNA374b or miRNA3196 in the presence or absence of melatonin under hypoxia was measured by using VEGF ELISA kit (Invitrogen, Carlsbad, CA, USA) according to the manufacturer's instructions.

Statistical analysis of the data was carried out using Prism (GraphPad software, Inc. CA, USA). All data were presented as means ± standard error of the mean (SEM). The statistically significant differences between control and melatonin-treated groups were evaluated by the Student's t test and one way Anova Tukey's multiple comparision test.

Previous studies have shown that melatonin has anti-angiogenic activity by regulating HIF-1alpha and sphingosine kinase 1 pathways (26, 27), despite weak cytotoxicity in HCT116 and PC-3 cancer cells. Recently, it was shown that miRNAs play critical roles as modulators of angiogenesis (19). To explore whether melatonin affects angiogenesis by regulating miRNAs, we used a miRNA array to determine miRNA profiles in melatonin-treated PC-3 cells under hypoxia. As shown in Table 1, the levels of 33 miRNAs were significantly upregulated, while those of 16 miRNAs were downregulated in melatonin-treated PC-3 cells based on a miRNA array. The differentially expressed miRNAs were further subjected to gene ontology (GO) and Kyoto Encyclopedia of gene and genomes (KEGG) analysis. Bioinformatic software packages, including TargetScan, miRNAwalk, miRNADB and RNA2-HAS, predicted that the biological processes involved in melatonin-treated PC-3 cells were metabolic process, cellular process, cell communication, developmental process, and transport, whereas the signaling pathways included Wnt, gonadotropin releasing hormone, inflammation mediated by chemokine and cytokine, integrin, cadherin, and angiogenesis-related pathways (Additional file 1: Supplementary Figure 1). Among them, HIF-1 alpha, HIF-2 alpha and VEGF target the angiogenic-signaling pathway. In this study, we found that miR-374b, miR-663 and miR130b are associated with VEGFA; miR-3613-3p and miR-3074-3p are associated with HIF-1alpha; hsa-miR-3195_st, miR-21-5p and Let7f are associated with HIF-2alpha; and miR-3613-3p and miR-4710 are associated with HIF-3alpha (Table 2). Among them, we selected two potent microRNAs (miRNA3195 and miRNA374b) for further study based on bioinformatic information and our miRNA data.

We validated upregulation of two miRNAs using qRT-PCR. Consistent with the miRNA array, the levels of miRNA3195 and miRNA374b were upregulated in melatonin-treated PC-3 cells under hypoxia compared to hypoxia control (Figure 1A). We also confirmed that miRNA3195 was upregulated by melatonin in hypoxic DU145 cells compared to normoxic control (Additional file 1: Supplementary Figure 2), while miRNA374b expression was not detected in DU145 cells using RT-qPCR. In addition, miR222 was downregulated in melatonin-treated PC-3 cells under hypoxia, while miR27a was not significantly repressed (Figure 1B).

Furthermore, we evaluated mRNA expression of angiogenesis-related proteins, such as HIF-1alpha, HIF-2alpha and VEGF in melatonin-treated PC-3 cells under hypoxia by qRT-PCR. As expected, melatonin at 1 mM attenuated mRNA levels of the angiogenesis-related genes HIF-1alpha, HIF-2alpha and VEGF in melatonin-treated PC-3 cells under hypoxia compared to hypoxia control (Figure 2). To further investigate the angiogenic properties of two potent microRNAs, we used miRNA mimics for overexpression in melatonin-treated PC-3 cells by transfection with control vector or miRNA3195 and miRNA374b mimics. We confirmed that two miRNAs were overexpressed in PC-3 cells by qRT-PCR (Figure 3A). To determine whether two miRNAs affect migratory activity, wound healing assay was performed in PC-3 cells 48 h after miRNA transfection. As shown in Figure 3B,C and 3D, overexpression of miRNA3195 and miRNA374b significantly inhibited the motility of PC-3 cells compared to untreated control.

Melatonin upregulated the expression of miRNA3195 and miRNA374b in hypoxic PC-3 cells. PC-3 cells were treated in the absence or presence of melatonin (Mel) (1mM) for 4 h under hypoxia or normoxia (normal oxygen level condition). Total RNA was isolated and analyzed by qRT-PCR for determining the level of miRNA3195, miRNA374 (A), miRNA222 and miRNA27a (B). U6 or RNU44 was used to normalize the expression of miRNA. Data are presented as means ± SEM of three independent experiments. * p<0.05, ** p<0.01 vs hypoxia control. 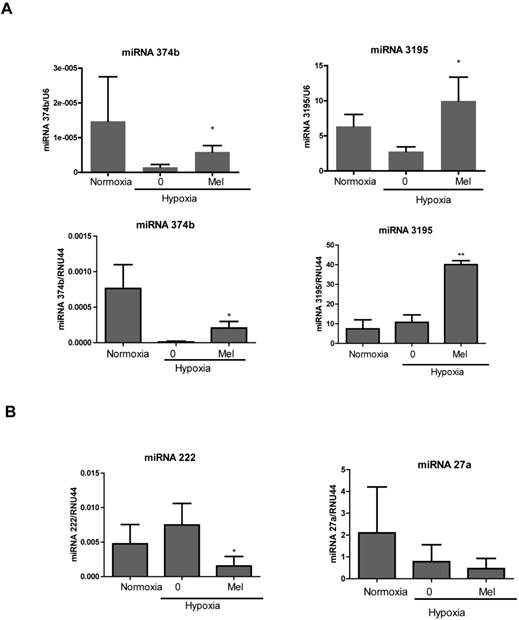 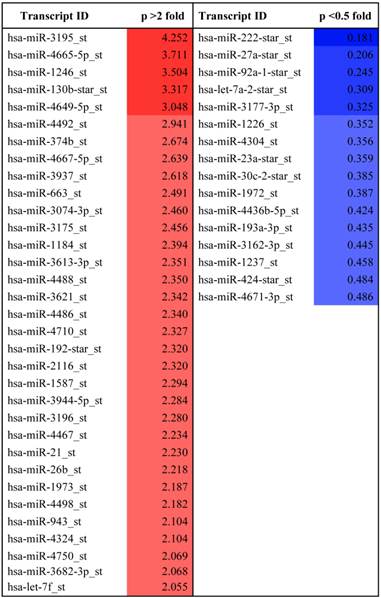 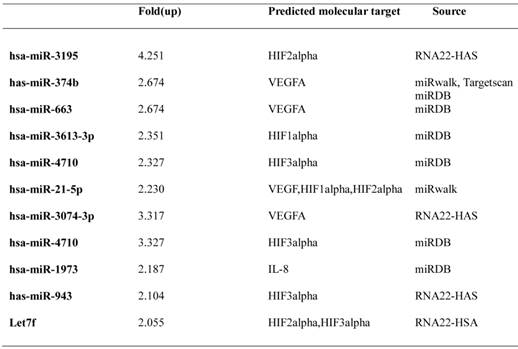 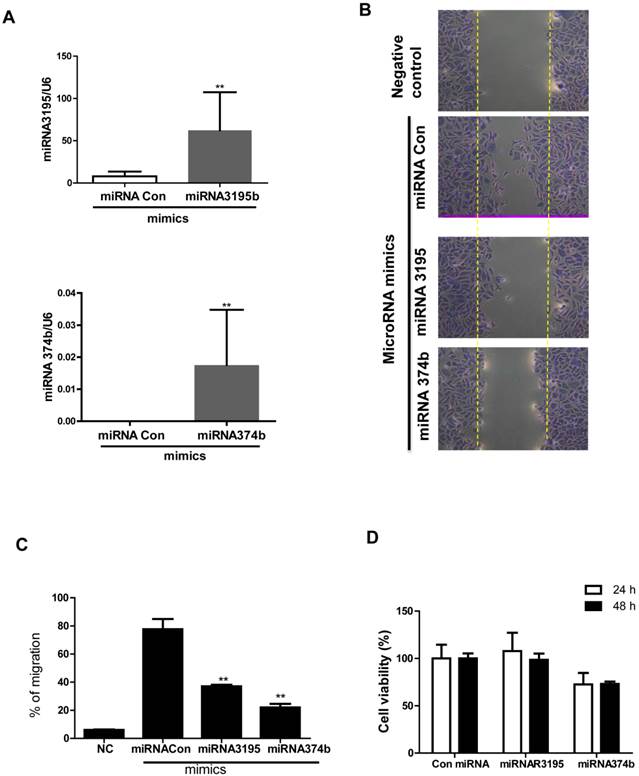 Likewise, overexpression of miRNA3195 and miRNA374b effectively inhibited mRNA expression of HIF-1alpha, HIF-2alpha and VEGF in hypoxic PC-3 cells compared to untreated hypoxia control (Figure 4A, 4B, 4C). In addition, Western blotting revealed that expression levels of HIF-1alpha and VEGF were attenuated in miRNA3195 and miRNA374b mimic-transfected PC-3 cells under hypoxia, but not in miRNA1290-transfected PC-3 cells (Figure 4D). Of note, melatonin significantly reduced VEGF production (as determined by ELISA) and VEGF protein (as determined by Western blotting) in hypoxic PC-3 cells transfected with miRNA3195 and miRNA374b mimics compared to miRNA vector control or only melatonin treated control (Figure 5A and C), while antisense oligonucleoties against miRNA374b or miRNA3195 did not attenuate production of VEGF in the presence of melatonin (Figure 5B). Antisense oligonucleoties against miRNA374b without melatonin rather increased the production of VEGF (Figure 5B). In contrast, the miRNA1290 mimic (used as the negative control) did not affect VEGF protein expression (Figure 5C). Similarly, immunofluorescence assay revealed that melatonin attenuated HIF-1alpha expression in miRNA3195 and miRNA 374b mimic-transfected PC-3 cells under hypoxia, whereas the miRNA1290 mimic did not affect VEGF immunofluorescent expression (Figure 5D).

Many studies have demonstrated a dual effect of melatonin on angiogenesis in cancer and endothelial cells. Ganguly et al. (10) reported that melatonin promotes angiogenesis during protection and healing of indomethacin-induced gastric ulcers, and Soybir et al. (28) suggested that melatonin enhances neovascularization and wound healing in rats with 5-cm incision damage. In contrast, melatonin suppressed tumor angiogenesis in HepG2 hepatocellular cancer (29) and PANC-1 pancreatic cancer (30) by inhibiting VEGF or signal transducer and activator of transcription 3 (STAT3) and HIF-1 alpha, and in PC-3 prostate cancer by inhibiting the sphingosine kinase pathway (26). Nevertheless, the mechanism underlying the association between melatonin and miRNAs remains unknown. In the current study, we found that 33 miRNAs (changes of at least twofold), including miRNA3195 and miRNA 374b, were significantly upregulated, and 16 miRNAs were downregulated, in melatonin-treated PC-3 cells under hypoxia based on miRNA expression profiling using microarrays, implying the important roles of miRNAs in melatonin-treated PC-3 cells under hypoxia. Considering our previous report that melatonin suppresses HIF-1alpha accumulation by inhibiting the sphingosine kinase 1 (SPHK1) pathway and reactive oxygen species (ROS) generation in hypoxic PC-3 cells, the anti-angiogenic activity may be the result of blockade of HIF-1alpha/VEGF/SPHK1 axis in association with some key miRNAs in hypoxic PC-3 cells. We selected two potent miRNAs (miRNA3195 and miRNA374b) for further mechanistic studies since miRNA3195 was the most highly upregulated based on our microRNA array data analysis and miRNA374b is downregulated in human prostate cancer tissues (25). 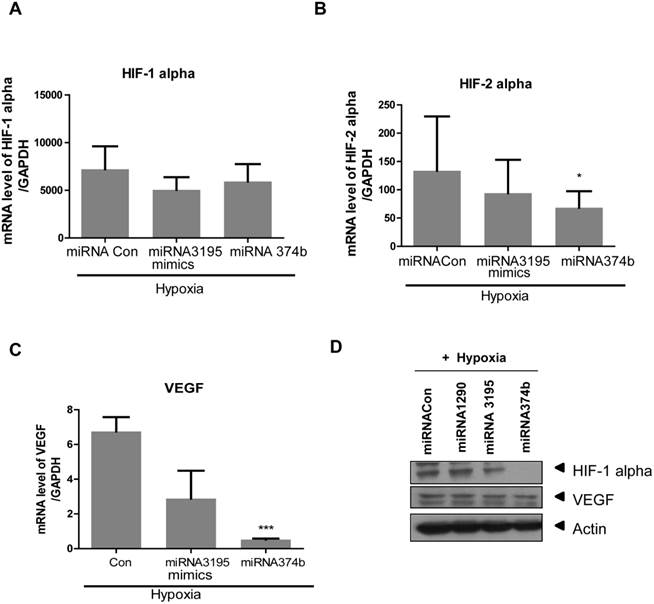 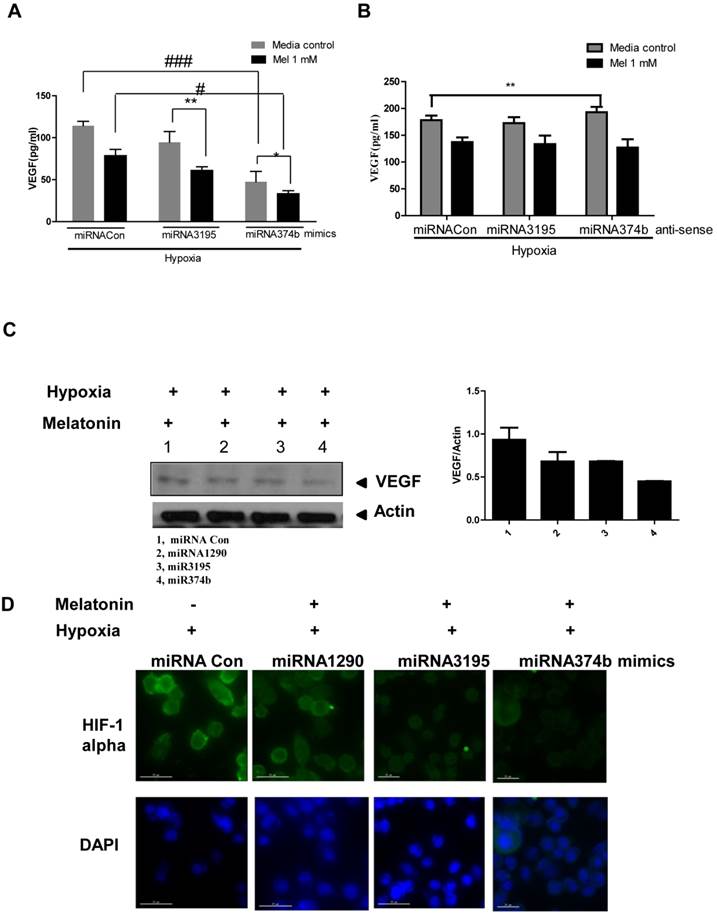 A schematic diagram for anti-angiogenic property of melatonin via regulation of miRNA3195 and miRNA374b in hypoxic PC-3 cells. 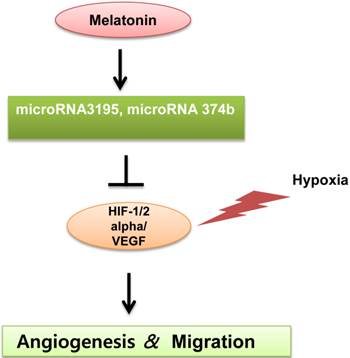 This work was supported by the National Research Foundation of Korea (NRF) grant funded by the Korea government (MSIP) (No. No. 2012-0005755).

The authors have declared that there is no conflict of interest.

4. Rastmanesh R, de Bruin PF. Potential of melatonin for the treatment or prevention of obesity: an urgent need to include weight reduction as a secondary outcome in clinical trials of melatonin in obese patients with sleep disorders. Contemp Clin Trials. 2012;33(4):574-575