Background: Neuroendocrine carcinomas (WHO grade 3) are highly aggressive tumors with an immense tendency to metastasize and with a poor prognosis. In advanced disease, there is no standard treatment beyond first-line platin/etoposide-based chemotherapy. Topotecan is widely used as second-line treatment in small cell lung cancer, which also responds markedly on first-line platin/etoposide. Hence, we investigated the feasibility of topotecan in previously treated patients with neuroendocrine carcinomas.

Material and Methods: Retrospective analysis of 22 patients with disseminated and progressive neuroendocrine carcinomas (Ki67>20%, G3) successively treated with oral topotecan 2.3 mg/m2 d1-5 every 3 weeks. All patients had previously received treatment with carboplatin/etoposide. Demographic, clinical and pathological features were recorded. CT-evaluations according to RECIST 1.1 were performed after every three courses. Hematological toxicity was assessed by CTC-criteria.

Neuroendocrine carcinomas (NECs) accounts for more than 10% of gastrointestinal neuroendocrine tumors [1]. NECs are highly malignant and the prognosis is often very poor despite treatment.

The optimal treatment strategy is challenging. First-line treatment has largely remained unchanged since the study by Moertel et al. in the early 1990s, which highlighted the efficacy and feasibility of using a chemotherapy treatment regimen for patients with small cell lung cancer (SCLC) in patients with NECs [2]. Beyond this first-line treatment there is no further well-documented standard regimen of treatment. Validated prognostic factors are needed to predict the aggressiveness of the tumor and thereby the optimal treatment for each patient.

Treatment with topotecan is associated with prolongation of survival and quality of life benefit in patients with relapsed SCLC [3]. Despite the lack of published studies, topotecan treatment has been transferred into the guidelines of The North American Neuroendocrine Tumor Society (NANETS) and the National Comprehensive Cancer Network (NCCN) as an option in patients with advanced NECs in relapsed patients [4,5].

Topotecan is a semisynthetic water-soluble derivative of camptothecin (CPT) and inhibits the cut-and-repair nuclear enzyme DNA topoisomerase I. It is predominantly used to treat SCLC, ovarian and cervical cancer, neuroblastoma, and glioma. Furthermore, topotecan has demonstrated significant activity as second-line therapy in recurrent SCLC both as intravenous and as oral formulation [6].

We present a retrospective analysis of patient characteristics and treatment efficacy in heavily pretreated patients with advanced stage NEC who received treatment with topotecan during 3 years period at the Department of Oncology, European NET Centre of Excellence, Rigshospitalet, Copenhagen, Denmark.

We retrospectively evaluated 22 patients with disseminated NEC (Ki-67>20%) and disease progression after previous exposure to carboplatin and etoposide and eligible for topotecan treatment from January 2010 to March 2013. All patients had adequate hematological, renal and hepatic function and WHO performance status 0-4. Topotecan was administered orally for 5 consecutive days every 3 weeks and patients received a dose of 2.3 mg/m2. Radiological tumor response was classified according to Response Evaluation Criteria in Solid Tumors (RECIST 1.0)

Patient characteristics are summarized in Table 1. No patients were lost to follow up.

Topotecan appears in international guidelines as a treatment option in NEC, and as such is an established but non-validated standard treatment. The study is a retrospective quality assurance of the treatment efficacy that was approved and supervised by the Institutional Study Review Board, and follows the requirements for maintenance of the institutions certification as a Center of Excellence accredited by the European Neuroendocrine Tumor Society (ENETS). Data handling was handled in a non-personalized matter (patient-numbering). All patients had given signed informed consent to the treatment.

Twenty hot spot areas (i.e. 20 areas within the tumor with a high count of immunoreactive tumor nuclei) were estimated and the mean percentage of Ki-67 cells calculated. An experienced neruroendocrine tumor pathologist with no knowledge of patient related prognostic information calculated the Ki-67 index.

Survival probability and PFS was estimated by the method of Kaplan and Meier, and significance was tested by the log-rank test using the IBM® SPSS® Statistics 20 software. A p value below 0.05 was considered significant.

Topotecan was administered as second-line treatment in five patients (23%), 13 patients (59%) received toptecan as third-line and four patients (18%) as fourth-line therapy.

Patients received a median of 2 courses (range 1-6) of treatment.

All 22 patients were eligible for response evaluation. No patient achieved complete response (CR) or partial response (PR). Five patients (23%) had stable disease (SD) and 17 (77%) had progressive disease (PD). Eight patients had no evaluation scans, four of them had unequivocal clinical progression and four patients had early death related to disease progression. Consequently, the disease control rate (CR + PR + SD) was 23%. The overall median survival time (OS) of the 22 patients was 3.2 months (Figure 1). The median progression free survival (PFS) time in all patients was 2.1 months (Figure 2). The one-year survival rate was 18%. The five patients with SD after 3 courses had a significantly longer survival of 7.1 months versus 3.0 months in patients with PD (P = 0.04). 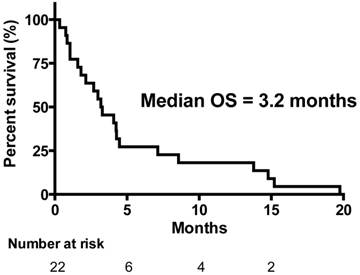 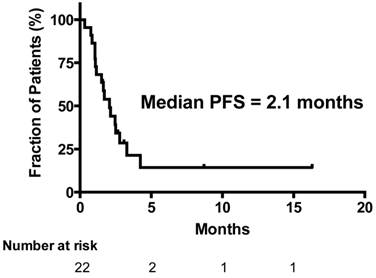 The treatment-related toxicities associated with topotecan in this patient population were relatively mild. Three patients (14%) experienced CTC grade 3 leucopenia, two patients grade 4 (9%) and three patients (14%) grade 3 thrombocytopenia. Febrile neutropenia occured in one patient (5%). Emesis was well controlled on the standard prophylactic antiemetic therapy, and no patients suffered from diarrhea. There were no treatment-related deaths.

First-line treatment of NECs based on platin and etoposide is widely recommended [7-9]. There is no established second-line therapy for NECs. Recent studies have demonstrated the efficacy of temozolomide alone or in combination with capecitabine ± bevacizumab. Particularly, there was a trend towards better survival in pancreatic NECs, in patients with a good performance status, and patients with Ki67<60% [10,11].

In the NANETS and the NCCN guidelines, topotecan therapy is mentioned as a treatment option [4,5]. Nonetheless, actually the present study is the first to report on the efficacy of topotecan as monotherapy in heavily pretreated NEC patients. Usually these patients rapidly deteriorate after first-line treatment and have a short survival. In our study, none of the 22 patients obtained objective response (CR + PR) to treatment. However, it is noteworthy that the treatment resulted in a disease control rate of 23% and a one-year survival rate of 18% in patients with tumor progression at study entry.

The study population had a high median Ki67 index of 95% and exhibited responsiveness, although not radiological objective responses, to topotecan. Recent studies of temozolomide as second line therapy for NEC patients had mostly responders in patients with low Ki67 indices (<50-55%) [10,11]. Recent data indicate that it might not be correct to consider all NEC as one single disease entity as in the present WHO classification (11) and that new treatments may be worth pursuing, guided by the Ki67 proliferative index and the site of tumor origin [12]. NEC patients with Ki67>55% are probably more responsive to platin-based chemotherapy, but have a shorter survival than patients with a lower Ki67. This is not contradicted in the present study.

The treatment strategy in advanced NEC remains a clinical challenge because of the lack of effective options and the absence of well-designed controlled randomized clinical trial data to support evidence-based practice. The majority of the studies reported so far vary exceedingly in terms of patient selection and type of chemotherapy.

The efficacy and toxicity results of topotecan as monotherapy in G3 NEC are quite similar to those in the second line treatment of small cell cancer, in which the treatment is one of the few treatment options [13].

Topotecan monotherapy shows modest anti-tumor activity in heavily treated patients with progressive disseminated G3 NECs. And as the toxicity of topotecan is tolerable, further studies of topotecan-based regimens are warranted.

SWL initiated the study. Study design and analytical strategy were developed by all authors. IHO made the data management supervised by SWL, UK, AK and BF. IHO wrote the first version of the manuscript and all authors took part in the revision. All authors have seen and approved the final version of this paper.

This research received no specific grant from any funding. Agency in the public, commercial or not-for-profit sectors.

There are no additional data available.