Breast cancer is the most frequently diagnosed cancer and the leading cause of death by cancer among females worldwide. An overwhelming majority of these deaths is because of metastasis. Estrogen stimulates and promotes growth of breast tumors, whereas transforming growth factor-beta (TGF-β) signaling promotes invasion and metastasis. We previously reported that estrogen and estrogen receptor alpha (ERα) suppressed breast cancer metastasis by inhibiting TGF-β signaling, whereas antiestrogens that suppress breast cancer growth, such as the selective ER modulator tamoxifen (TAM) or the pure antiestrogen fulvestrant (ICI 182,780), cannot suppress TGF-β signaling or breast cancer invasiveness. Therefore, we predicted that a compound that inhibits TGF-β signaling but does not facilitate ERα signaling would be ideal for suppressing breast cancer invasiveness and growth. In the present study, we identified an ideal candidate compound, N-23. Like estrogen, N-23 strongly decreased expression of TGF-β/Smad target gene plasminogen activator inhibitor-1 (PAI-1), but it did not increase the expression of ERα target gene pS2. While estrogen decreased the levels of phosphorylated Smad2 and Smad3, N-23 had no effect. In addition, TGF-β-dependent recruitment of Smad3 to the PAI-1 gene promoter was inhibited in the presence of estrogen or N-23. We also investigated the effects of N-23 on proliferation, migration, and invasion of breast cancer cells. In contrast to estrogen, N-23 inhibited the cellular proliferation of breast cancer cells. Moreover, we showed that N-23 suppressed the migration and invasion of breast cancer cells to the same extent as by estrogen. Taken together, our findings indicate that N-23 may be a candidate compound that is effective in inhibiting breast cancer progression.

Breast cancer is the most frequently diagnosed cancer and the leading cause of death by cancer among females worldwide. Breast cancer accounts for 23% (1.38 million) of all new cancer cases and 14% (458,400) of all deaths by cancer [1]. Breast cancer is typically hormone-dependent; exposure to estrogen promotes breast cancer cell growth and proliferation. The effects of estrogen are mediated by the binding of estrogen receptors (ER), ERα and ERβ, which are members of the nuclear receptor superfamily that function as ligand-induced transcription factors [2, 3]. ERα is the major ER subtype in mammary epithelium, and it plays an important role in breast cancer progression [4, 5].

Upon estrogen binding, ligand-activated ERα binds to the estrogen responsive element (ERE) in the target gene promoter and stimulates gene expression [6-8]. Because estrogen plays a significant role in the stimulation and growth of breast cancer cells, antiestrogens such as the selective ER modulator (SERM) including tamoxifen (TAM), or fulvestrant [ICI 182,780 (ICI)] are used in endocrine therapy for ER-positive breast cancer [9]. TAM has both estrogen agonist and antagonist effects that are specific for its target tissue. In breast tissue, TAM acts primarily as an estrogen antagonist. Unlike TAM, ICI is a pure ER antagonist that does not exhibit agonist effects and downregulates ER protein [10].

The transforming growth factor-beta (TGF-β) superfamily is a large, evolutionarily conserved family of secreted multifunctional peptides involved in almost every aspect of cellular behavior [11]. TGF-β binding to TGF-β receptors triggers phosphorylation of Smad family members [12, 13]. Smad2 and Smad3 are both receptor-activated Smads (R-Smad), whereas Smad4 serves as a common partner (Co-Smad) for all R-Smads [14]. The overwhelming majority of deaths due to cancer are because of metastasis [15], and several studies have demonstrated that TGF-β/Smad pathway plays a crucial role in cancer metastasis [16, 17]. These studies suggest that regulation of TGF-β signaling is important for breast cancer therapy.

In the present study, we screened for compounds that demonstrated such activity and then identified N-23 as an ideal compound. We demonstrated that the inhibitory effect of N-23 on TGF-β signaling is mediated by ERα. In addition, we showed that N-23 suppresses TGF-β signaling by inhibiting TGF-β-dependent recruitment of Smad3 to the TGF-β target gene promoter. Moreover, N-23 suppresses the proliferation and invasiveness of breast cancer cells. Our observations suggest that N-23 is a candidate compound that is effective for the inhibition of breast cancer progression.

RNA interference. For transfection of siRNAs, cells at 30 to 50% confluency were transfected with 20 nM of siRNA using Lipofectamine RNAiMAX (Invitrogen) according to the manufacturer's protocol. The siRNA duplexes human ERα, 5'-GCUACUGUGCAGUGUGCAAUGACUA-3'. StealthTM RNAi negative control Med GC (Invitrogen) was used as a negative control.

Tumor xenograft models. Female BALB/c nu/nu mice at 5 weeks of age were purchased from CLEA Japan. The mice were kept in a pathogen-free environment under controlled conditions of light and humidity. MCF-7 cells were cultured as monolayers, trypsinized and resuspended in Matrigel at 1.0 × 108 cells per ml. Each mouse was injected subcutaneously with 100 μl of cell suspension (1 × 107 cells) in both flanks. N-23 was subcutaneously injected in the scruff of the neck (45 mg/kg) for every 2 days. Tumor growth was monitored twice each week by measuring the tumor size using calipers; tumor volume was determined using the formula V = 1/2 × larger diameter × (smaller diameter)2. At day 63, tumors were excised, weighed and fixed with 20% formalin. All animal experiments were performed in accordance with institutional guidelines.

Invasion and migration assay. The invasive potential of MCF-7-M5 cells was tested with Matrigel invasion chambers (24-well format, 8 μm pore size; BD Biosciences). After incubation in DMEM containing 4% charcoal-stripped FBS for 24 h, cells were incubated with vehicle alone (DMSO) or estrogen (10-8 M) or N-23 (10-6 M), and transferred into insert chambers for 36 h. After incubation, the cells on the upper surface of the filter were removed, and invading cells were fixed in methanol. Fixed cells were stained with crystal violet and counted under a microscope. Migration assays were performed using the same procedure, except that the insert chambers were not coated with Matrigel and cells in chamber were incubated for 24 h.

Screening was performed using luciferase reporter assays with reporter plasmids containing 3 × EREs or TGF-β responsive elements (9 × CAGA). Through this screening, we identified N-1 as a candidate compound (Fig. 1A). To confirm the effects of N-1 on ERα transcriptional activity and TGF-β signaling, we examined the mRNA levels of the ERα target gene pS2 and the TGF-β/Smad target gene plasminogen activator inhibitor-1 (PAI-1) (Fig. 1B and C). Estrogen increased pS2 expression, whereas N-1 did not affect it with or without estrogen (Fig. 1B and Supplementary Figure 1A). PAI-1 expression was increased with TGF-β treatment, but this was attenuated by estrogen or N-1 treatment (Fig. 1C). These results indicate that N-1 does not enhance the ERα pathway but inhibits TGF-β signaling.

Identification of the compound N-23, which does not enhance ERα signaling and inhibits TGF-β signaling through ERα 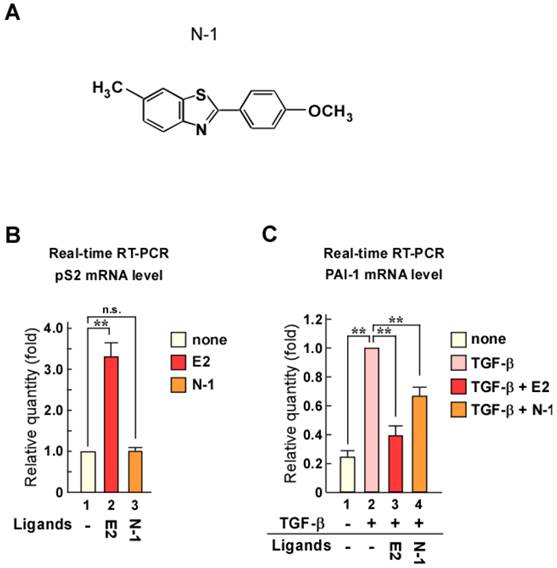 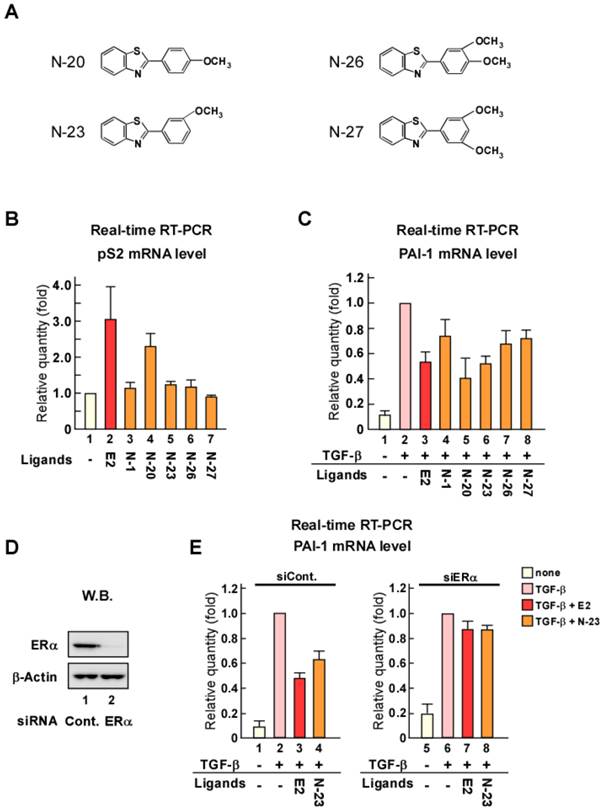 When TGF-β binds to its cell surface receptors, the activated receptors phosphorylate Smad2 and Smad3, which are key transducers of TGF-β signaling. We previously reported that ERα forms a protein complex with Smad and Smurf, a ubiquitin ligase for Smad [18]. In addition, we demonstrated that Smad ubiquitination and subsequent degradation by ERα are enhanced in an estrogen-dependent manner that results in inhibition of TGF-β signaling. Therefore, to explore the mechanism underlying the inhibition of TGF-β signaling by N-23, we evaluated the effect of N-23 on Smad and pSmad protein levels using Western blotting (Fig. 3A). Total Smad and pSmad protein levels were reduced by estrogen as in our previous study, whereas N-23 had no effect (Fig. 3A, lanes 3 and 4). These results indicate that the inhibitory effect of N-23 on TGF-β signaling is not mediated by Smad or pSmad degradation, unlike estrogen. Next, we examined Smad3 recruitment to the promoter region in the PAI-1 gene since Smad3 has DNA-binding ability [24]. Chromatin immunoprecipitation (ChIP) assay demonstrated that the interaction between Smad3 and the PAI-1 promoter is potentiated by TGF-β, and Smad3 recruitment was suppressed in the presence of estrogen or N-23 (Fig. 3B). These results indicate that N-23 suppresses TGF-β signaling by inhibiting TGF-β-dependent recruitment of Smad3 to the PAI-1 promoter.

N-23 suppresses the proliferation and invasiveness of breast cancer cells

Approximately two-thirds of all breast cancers express ER. Therefore, ER expression is predictive of response to endocrine therapy to prevent estrogen stimulation for proliferation. To antagonize ER signaling, ICI and SERMs including TAM are used in breast cancer therapy. SERMs have been used for several years as the first-line hormonal therapy for postmenopausal patients. Furthermore, TAM is an effective treatment for all stages of hormone-responsive breast cancer and can prevent breast cancer in high-risk women [25]. Nevertheless, breast cancer is still the leading cause of death by cancer in females all over the world. Majority of deaths are because of metastasis in breast cancer patients as well as in other cancer patients. 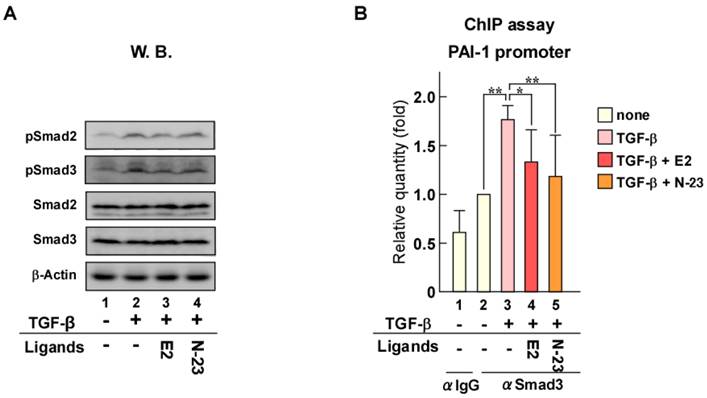 N-23 suppresses both proliferation and invasiveness of breast cancer cells. (A) Proliferation of MCF-7 cells is inhibited by N-23 treatment. MCF-7 cells were cultured in the presence or absence of E2 (10-8 M) or N-23 (10-6 M). At the indicated time points, the number of cells were counted using Countess Automated Cell Counter (Invitrogen). (B, C) N-23 suppresses breast cancer tumor growth in vivo. Nude mice were injected in both flanks with MCF-7 cells and injected with DMSO (Vehicle) or N-23 (45 mg/kg) for every 2 days. Tumor growth was monitored twice each week (B) and xenografts were removed and weighed after 63 days (C). (D, E) MCF-7-M5 cells were seeded onto filters in uncoated (D) or Matrigel matrix-coated (E) top chambers in the absence or presence of E2 (10-8 M) or N-23 (10-6 M). After incubation, migrated or invaded cells were stained using crystal violet and counted under a microscope. ** indicates p < 0.01 and * indicates p < 0.05. 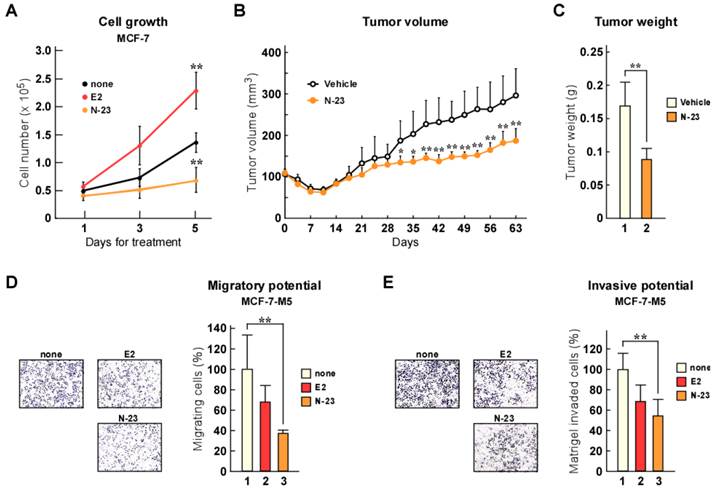 In a previous study, we showed that estrogen suppressed breast cancer invasion by inhibiting TGF-β signaling via a non-genomic pathway. ERs are known to bind with their specific response element ERE, and regulate its downstream target genes [6, 7]; this process is known as the genomic pathway. However, it has been recently established that ERs regulate several transcriptional factors through protein-protein interactions, and this process is defined as the non-genomic pathway. From these observations, it was revealed that estrogen does not use the genomic functions of ERα to inhibit TGF-β signaling. Thus, we speculate that some ERα ligands could separately regulate the genomic or non-genomic functions of ERα.

This work was supported by grants from Japan Science and technology Agency (JST), and from the Ministry of Education, Culture, Sports, Science and Technology of Japan.