Localized tumors are potentially curable, but the prognosis of cancer deteriorates once tumors have generated metastases (1). The initial step of metastasis begins with the intravasation of tumor cells into the blood circulation (1). After entering the blood stream, tumor cells are carried into the vasculature of distant organs, where they attach, extravasate and begin to form colonies. Metastatic seeding is aided by the capacity of circulating tumor cells to activate the clotting cascade and surround themselves with a fibrin-platelet thrombus, which facilitates tumor cell survival and extravasation in the target organ (2, 3). This process plays a critical role for metastasis because knocking down clotting factors in transgenic mice or inhibiting clot formation with anti-coagulants has a marked anti-metastatic effect (4-7).

An important function of clotting is to protect tumor cells from the cytotoxic activity of natural killer (NK) cells by generating a physical barrier that blocks interactions between activating NK cell receptors and their ligands on tumor cells (3, 7). In addition, clotted plasma provides circulating tumor cells with a provisional extracellular matrix that promotes tumor cell adhesion and invasion (2, 8). Adhesive interactions of tumor cells with clotted plasma are mediated by integrins, which bind to fibrin or plasma adhesion proteins cross-linked to fibrin and, consequently activate important intracellular signaling cascades such as the PI3-kinase pathway (9). Moreover, signaling through integrins has been shown to protect tumor cells from the cytotoxic activity of TRAIL and tumor necrosis factor α (TNFα), two cytokines secreted by NK cells, suggesting that adhesive interactions with clotted plasma could be relevant for the survival of circulating tumor cells (10, 11).

Cell Invasion and colony formation. To determine cell invasion, fibrin-fibronectin-embedded B16F1 cells were analyzed for invadopodia formation as previously described (2, 17). To this end, 5×104 B16F1 cells were suspended in fibrinogen (2 mg/ml), pFN (200 µg/ml), FXIII (25 μg/ml) and CaCl2 (2 mM) and 2.5 U/ml thrombin was added to induce clotting. Clot-embedded cells were incubated in 10% fetal bovine serum overnight and then recorded for invadopodia formation at designated areas with a phase contrast microscope and attached camera (Nikon Eclipse TS100; 10× magnification). Invadopodia formation was classified as complete when cells had a spindle or stellate shape, which was mediated by the proteolytic activity of matrix metalloproteinases (MMPs) (2). B16F1 cells treated with a broad spectrum MMP inhibitor or siRNA against membrane-type 1 matrix metalloproteinase remained round (with or without rudimentary invadopodia) and, therefore, where classified as non-invasive (2). Invasion was analyzed by assessing invadopodia-positive tumor cells as percent of all tumor cells. Colony formation was monitored by measuring the diameter of B16F1 cell spheres at indicated times. Where indicated, clots were incubated in the presence of the PI3-kinase inhibitor LY294002 (10 µM), the protein kinase C (PKC) inhibitor Gö6976 (1 µM), the JNK inhibitor SP600125 (10 µM), the MEK inhibitor U0126 (10 µM) (Cell Signaling) or the Tie2 inhibitor 4-(6-Methoxy-2-naphthyl)-2-(4-methylsulfinylphenyl)-5-(4-pyridyl)-1H-imidazole (Santa Cruz Biotechnology) (18, 19).

Cell Adhesion Assay. To assess adhesion of B16F1 cells, 48-well plates (Costar, polystyrene, non-tissue culture treated) were incubated with 10 µg/ml of fibrinogen or solubilized clot material from fibrin-fibronectin (4°C overnight) (20), then washed with PBS and blocked with 1 % BSA (1 hour, 37°C). 2 × 105 cells suspended in HEPES-Tyrode's buffer (+ 0.1% BSA and 2 mM CaCl2) were added to the plate and allowed to attach for 45-60 minutes (37°C, 5% CO2). To induce adhesion to fibrinogen, solubilized fibrin-fibronectin complexes were added to the cell binding buffer at the time of plating (2). Plates were washed to remove floating cells. Attached cells were incubated with para-nitrophenol phosphate for 30 minutes and quantified at 405 nm after adding 0.3 M sodium hydroxide (21).

RNA analysis. B16F1 cells were monitored for changes in gene expression following embedding in fibrin-fibronectin versus fibrin after 16 hours. Total RNA was isolated from embedded cells using the Qiagen RNeasy kit (Qiagen) and hybridized to the Mouse Cancer PathwayFinder PCR Array (SABiosciences) according to the manufacturer's instructions. RNA expression was measured using the iQ5 Real-Time PCR Detection System (Bio-Rad Laboratories) and values were normalized to housekeeping genes present on the array. Genes that changed by at least 1.5 fold in response to fibrin-fibronectin compared to fibrin were identified.

TNFα induces cell death in fibrin-embedded tumor cells. Circulating tumor cells can co-opt the coagulation system to generate a provisional extracellular matrix that provides protection from immune cells and their secreted effectors (6, 7). To analyze the role of blood clotting for tumor cell fate in response to inflammatory cytokines, we treated fibrin-embedded B16F1 with TNFα or IFN-γ and assessed cell death by measuring PI uptake. Using this method, we detected a significant increase of cell death 16 hours after treatment with TNFα (50 ng/ml) while IFNγ (14,000 U/ml) had no effect (Fig. 1A). TNFα-induced cell death was detectable at 5 ng/ml and further increased at 50 ng/ml as assessed by PI uptake as well as LDH release (Fig. 1B-C). However, we did not detect apoptosis-specific DNA fragments in response to TNFα indicating that PI uptake and LDH release are the result of necrotic cell death (Fig. 1D). Taken together, our results show that TNFα is a potent inducer of cell death in fibrin-embedded B16F1 tumor cells.

TNFα is cytotoxic for fibrin-embedded tumor cells. (A), B16F1 cells were analyzed for PI uptake by fluorescence microscopy 16 hours after embedding in fibrin and treatment with 50 ng/ml TNFα, 14,000U/ml IFNγ or vehicle (n.s., not significant). (B-D), B16F1 cells embedded in fibrin were analyzed for PI uptake (B), LDH release (C) or DNA fragmentation (D) after treatment with TNFα (5 or 50 ng/ml) compared to vehicle (Veh). Camptothecin and staurosporin (C/S) were used as a positive control. 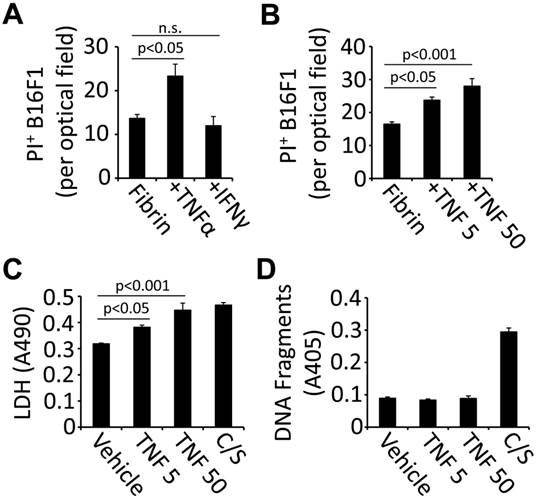 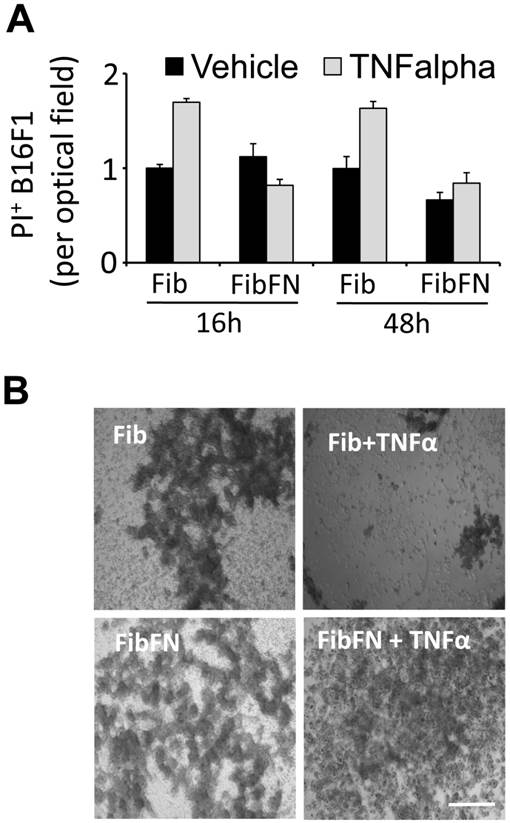 Fibrin-fibronectin mediates tumor cell invasion and survival through Tie-2. To identify mechanisms that contribute to invadopodia formation, we analyzed gene expression of cancer-relevant pathways in B16F1 cells embedded in fibrin-fibronectin compared to fibrin alone. This study led to the identification of TNFα, Tie-2 and uPA, which were found to be specifically upregulated in the presence of fibronectin (Fig. 4A). To determine the functional relevance of the gene expression analysis, we treated B16F1 cells with siRNA, which demonstrated an important role of Tie2 for invadopodia formation (Fig. 4B). Knocking down uPA or TNFα, on the other hand, had only minor effects on tumor cell invasion into fibrin-fibronectin. In addition, Tie2 knockdown reduced B16F1 colony formation and reversed the protective effect of fibrin-fibronectin against TNFα (Fig. 4D, F). To further analyze the function of Tie2, we treated B16F1 cells with a Tie2 kinase inhibitor. Paralleling our results with Tie 2 siRNA, treatment with Tie2 kinase inhibitor resulted in significant reduction of both invadopodia and colony formation in fibrin-fibronectin embedded B16F1 cells indicating that the tyrosine kinase function of Tie2 is required for these processes (Fig. 4C, E). Together, our results indicate that plasma fibronectin promotes invasion, colony formation and TNFα-resistance in fibrin-embedded tumor cells through upregulation of Tie2. 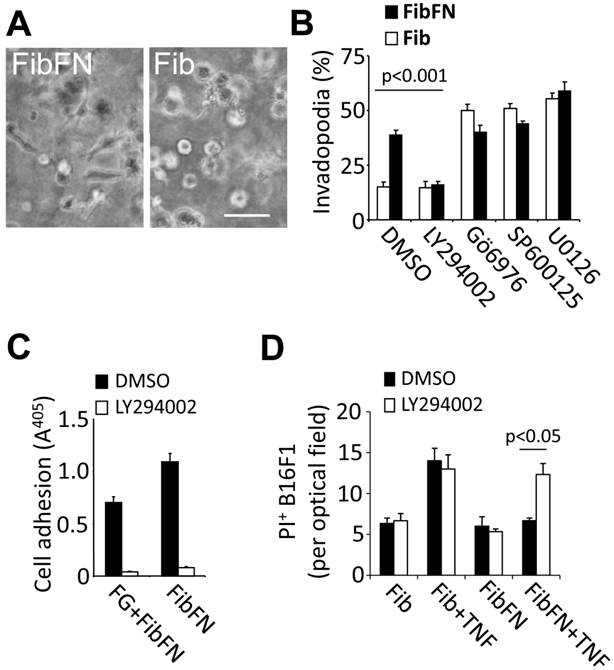 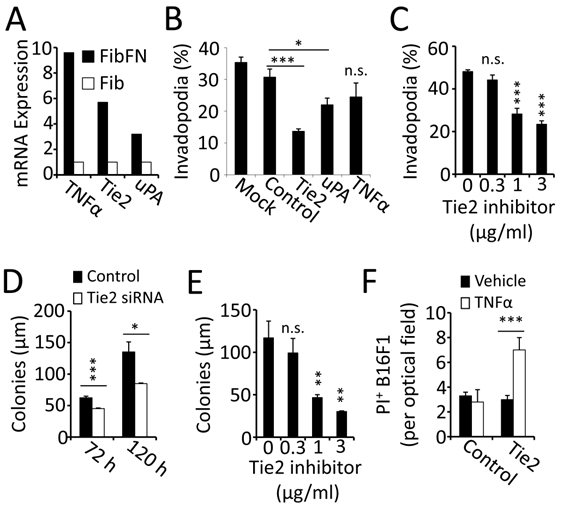 Our results indicate that PI3-kinase is at the center of plasma fibronectin-mediated functions by demonstrating inhibition of B16F1 cell adhesion and invasion into fibrin-fibronectin matrix after treatment with the PI3-kinase inhibitor LY294002. This is in line with previous reports showing that PI3-kinase is capable of activating integrin αvβ3, which is critical for tumor cell adhesion to fibrin(ogen) (25). It is also in line with our previous observation that fibrin-fibronectin complexes can activate integrin αvβ3 (2). In addition, PI3-kinase plays an important role in cell adhesion and invadopodia biogenesis downstream of integrins by regulating actin filament dynamics through activation of Rac1, Cdc42 and PAK (26-28). While each of these factors can suppress pro-apoptotic signals, they also act as a positive feedback loop to increase activation of PI3-kinase and Akt as a result of increased cell-ECM interactions and focal adhesion maturation (28-31).

An important function of PI3-kinase/Akt is to inactivate the proapoptotic peptide Bad and, thus, promote cell survival (32). However, this mechanism is thought to specifically prevent apoptotic cell death whereas we found that TNFα caused non-apoptotic cell death in fibrin-embedded B16F1 cells, which is in line with previous studies demonstrating that TNFα, depending on cell type and context, can induce apoptosis as well as necrosis (33). TNFα-induced necrosis depends on Rip1 kinase and occurs in cells that are unable to undergo apoptosis (34). In these cells, Rip1 forms a complex with Rip3 kinase, which leads to increased production of reactive oxygen species as a prerequisite of necrotic cell death (35, 36). Importantly, the ability of Rip1 to induce necrotic cell death has been shown to be inhibited following activation of NF-κB, which prevents TNFα from inducing cell death by mediating polyubiquitination of Rip1 through cIAP1 and 2 (37, 38). Polyubiquinated Rip1 in turn presents a scaffold for the assembly of a protein complex that mediates NF-κB activation and cell survival in reponse to TNFα (39). Considering the capacity of PI3-kinase to activate NF-κB, it is conceivable that this mechanism could lead to cIAP expression and protection of tumor cells from TNFα-induced cell death (40, 41).

To further elucidate the effect of plasma fibronectin on tumor cell survival and invasion, we performed a comparative gene expression analysis between fibrin and fibrin-fibronectin embedded B16F1 cells. Our study showed significant up-regulation of the NFκB-target gene TNFα, suggesting that fibrin-fibronectin complexes can activate inflammatory pathways (42). In addition, we detected a significant increase of Tie2 in fibrin-fibronectin-embedded B16F1 cells, which is surprising as Tie2 has been shown to be predominantly expressed in endothelial cells and angiogenic macrophages (43, 44). Tie2 is a receptor tyrosine kinase, which upon binding to its ligand angiopoietin 1 induces activation of PI3-kinase and PAK (45, 46). In line with this function, we found that knockdown of Tie2 or treatment with a Tie2 kinase inhibitor significantly inhibited invadopodia and sphere formation. In addition, we found that Tie2 provided protection from TNFα-mediated cytotoxicity in fibrin-fibronectin embedded cells suggesting that Tie2 acts in concert with plasma fibronectin and PI3-kinase. Moreover, the role of Tie2 for B16F1 clot colonization is interesting considering that B16F1 cells raised in 3-dimensional fibrin take on characteristics of tumor stem cells (47).

Based on our results, we propose a mechanism where the incorporation of plasma fibronectin into a 3-dimensional matrix of fibrin induces increased expression of the receptor tyrosine kinase Tie2 in B16F1 cells. Tie2, which has been shown to activate PI3-kinase and PAK (45, 46), promotes invadopodia and colony formation in fibrin-fibronectin embedded B16F1 cells. Inhibiting these pro-metastatic functions and sensitizing tumor cells for TNFα with Tie2 inhibitors could be an attractive strategy for the treatment of metastatic cancer.