Sphingosine-1-phosphate (S1P) is an important sphingolipid metabolite regulating key physiological and pathophysiological processes such as cell growth and survival and tumor angiogenesis. Significant research evidence links elevated cellular S1P concentration to cancer cell proliferation, migration and angiogenesis. Physiological levels of S1P are tightly regulated and maintained at the low nanomolar level. In cancer, S1P may exist well beyond the low nanomolar level. Recently, we reported that S1P selectively induces cell apoptosis of the breast cancer MCF7 cell line at concentrations higher than 1 µM and co-administration of 1 µM S1P significantly increased the cytotoxicity of chemotherapy drug docetaxel. In this study, we show that S1P caused minor increases in cell proliferation or apoptosis, in a concentration-dependent manner, yet co-administration of 10 µM S1P exhibited a significant synergistic effect with chemotherapy drugs docetaxel, doxorubicin and cyclophosphamide. S1P increased the cytotoxic potential of each drug by 2-fold, 3-fold, and 10-fold, respectively, against the breast cancer metastatic cell line MDA-MB-361. This synergism may suggest improved anticancer drug therapy by co-administration of exogenous S1P.

Sphingosine-1-phosphate (S1P) is a bioactive metabolite in the sphingolipid metabolic pathway. It regulates important physiological and pathophysiological processes such as cell growth and survival, angiogenesis and cell migration (1-3). S1P exerts its biological functions both extracellularly and intracellularly (4-6). Its extracellular function follows an “inside-out” model, in which S1P is synthesized inside the cell and then transported out of the cell to trigger a family of G-protein coupled receptors designated sphingosine-1-phosphate receptors 1-5 (S1PR1-5) to promote cell proliferation, survival and migration and oppose cell apoptosis (4, 5, 7, 8). Its intracellular function is not well defined but S1P is suggested to act as a second messenger regulating calcium mobilization and cell proliferation and survival (3, 6, 9, 10). S1P may also promote cell apoptosis, and emerging evidence suggests that the apoptotic effect of S1P correlates with its intracellular function (11, 12).

The MDA-MB-361 cells were plated in 96-well plates and grown to 70 - 80% confluence before being treated with S1P for 18 h. The S1P (in ethanol) concentration was ranging from 0.13 µM to 8.0 µM for proliferation and 0.16 µM to 10.0 µM for apoptosis. Treatment with ethanol was used as negative control. Cell proliferation and apoptosis were measured using the CellTiter 96 AQueous Non-Radioactive Cell Proliferation Assay and the Caspase-Glo® 3/7 Assay systems from the Promega Corporation (Madison, WI), respectively.

The MDA-MB-361 cells were plated in 96-well plates and grown to 70 - 80% confluence before being treated with S1P at concentrations of 1 µM and 10 µM. Treatment with ethanol was used as negative control. The S1P cytotoxicity was measured at exposure time of 6 h, 12 h, 24 h, 48 h and 72 h, respectively, using the CytoTox96® Non-Radioactive Cytotoxicity Assay from Promega Corporation.

The MDA-MB-361 cells were plated in 96-well plates and grown to 70 - 80% confluence before being treated with three chemotherapy drugs, docetaxel (0.63 - 40 µg/ml), doxorubicin (0.31 - 20 µM) and cyclophosphamide (32.5 µM - 2 mM), alone or in combination with 1 µM or 10 µM S1P for 18 h. These chemotherapy drugs were prepared in ethanol except doxorubicin which was prepared in 50% water/ethanol, and treatment with ethanol or 50% water/ethanol was used as negative control. The cytotoxicity of each treatment was also measured using the CytoTox96® Non-Radioactive Cytotoxicity Assay from Promega Corporation.

Effects of S1P on cell proliferation and apoptosis

Percentage increase (mean ± standard deviation) of cell proliferation and apoptosis of human brain-metastasized breast cancer MDA-MB-361 cells (A: proliferation; B: apoptosis - caspase 3/7) after exposure to different S1P concentrations for 18 h. Treatment with only ethanol was used as negative control. Data were obtained from three independent experiments, each of which was carried out in triplicate. 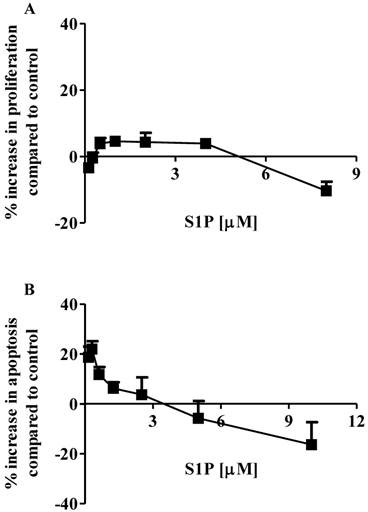 Cytotoxicity of S1P against MDA-MB-361 cells

Cell necrosis is an additional mechanism of cancer cell cytotoxicity. S1P cytotoxicity against MDA-MB-361 cells was evaluated for up to 72 h of exposure at concentrations of 1 µM and 10 µM. As shown in Fig. 2, S1P did not cause any cytotoxicity to the MDA-MB-361 cells at a concentration of 1 µM. Since S1P was shown to cause a 10% increase in MDA-MB-361 cell apoptosis at 1 µM (Fig. 1), prolonged treatment (> 72 h) might be needed in order to observe the cell death. At 10 µM, S1P exhibited a time-dependent positive linear cytotoxic response towards MDA-MB-361 cells (Fig. 2). Cytotoxicity was increased by about 35% compared to control after 72 h of treatment. Extended treatment with high concentrations of S1P (≥ 10 µM) would likely enhance its cytotoxicity against MDA-MB-361 cells. Although high concentrations of exogenous S1P may lead to necrosis of normal tissues, severe S1P-associated side effects are not expected due to the following two reasons: first, S1P is an endogenous molecule and should possess lower toxicity and better tolerance than synthetic anticancer agents; and second, the human body may have a response system to deal with high S1P concentrations as the normal serum S1P level is around 0.2 - 0.9 µM (17) and short time of exposure to high concentrations of S1P is unlikely to be life-threatening or severely detrimental as the serum S1P level was observed to rise up to 15 µM in children patients with juvenile-onset systemic lupus erythematosus (JSLE) (18) and the 5-year survival rate for JSLE is close to 100% (19).

Percentage increase (mean ± standard deviation) in cytotoxicity following 1 µM (solid squares) and 10 µM (solid diamonds) exposure of S1P to human brain-metastasized breast cancer MDA-MB-361 cells at different exposure times. Treatment with only ethanol was used as negative control. Data were obtained from three independent experiments, each of which was carried out in triplicate. 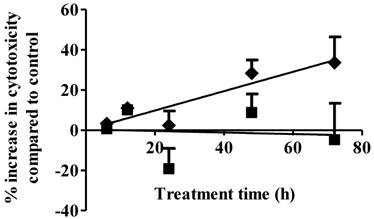 To treat brain-metastasized breast cancer, therapeutic agents must cross the blood-brain barrier. Recently, it was shown that S1P binding to its receptor S1PR1 in brain capillaries increased delivery of therapeutic drugs into the brain, and possibly of S1P as well, through reductions in basal P-glycoprotein transport activity (16). Although systemic S1P administrations may not achieve therapeutically effective S1P levels in the brain (i.e. 10 µM), high S1P concentrations are possible with intratumoral injections or through the use of novel drug delivery systems. Additional studies using cancer-cell targeted nanoparticles warrant investigations given the potential improvement in anticancer therapy against brain metastasis of breast cancer afforded by the synergistic effect of S1P with typical cancer chemotherapeutic drugs. The potential therapeutic benefit of co-administration of S1P also warrants investigations into its potential toxicity, particularly potential detrimental effects to the central nervous system if intratumoral injection or nanodelivery vehicles are exploited to enhance S1P levels in the brain.

Percentage increase (mean ± standard deviation) in cytotoxicity of docetaxel (A), doxorubicin (B), and cyclophosphamide (C) against the human brain-metastasized breast cancer MDA-MB-361 cells at different concentrations alone (solid squares), in combination with 1 µM S1P (solid diamonds), or in combination with 10 µM S1P (solid triangles). The cytotoxicity was measured 18 h after exposure. Treatment with ethanol (for docetaxel and cyclophosphamide) or 50% water/ethanol (for doxorubicin) was used as negative control. Data were obtained from three independent experiments, each of which was carried out in triplicate.

We showed that S1P was not an efficient stimulator of cell proliferation or apoptosis towards the brain-metastasized breast cancer MDA-MB-361 cells. However, co-administration of 10 µM S1P exhibited a synergistic effect with chemotherapy agents docetaxel, doxorubicin and cyclophosphamide increasing their cytotoxicity against MDA-MB-361 cells by almost 2-fold, 3-fold and 10-fold, respectively.

A research grant from the Canadian Breast Cancer Foundation (CBCF) and an internal grant from the College of Pharmacy and Nutrition, University of Saskatchewan, supported this work. Ahlam Sultan would like to acknowledge the Saudi Arabia government for a graduate scholarship.