Method: We enrolled eighteen women who had abdominal radical trachelectomy with pelvic lymphadenectomy and sixteen patients who had abdominal radical hysterectomy for this study. Ten thousand one hundred eighty-six women were also included as a control group for comparison. The Mann-Whitney U test was used for comparison of patient characteristics and comparison of serum anti-Müllerian hormone levels between the three groups.

Conclusions: Serum anti-Müllerian hormone levels could be useful as a marker of ovarian reserve after abdominal radical trachelectomy. It is important to avoid postoperative complications causing a reduction in ovarian function to accomplish fertility-sparing surgery.

Cervical cancer is the second most common cancer in women in developing countries and the seventh in developed countries. More than 25% of women with cervical cancer are under 40 years of age and the age of nulliparous women has increased in developed countries [1]. A total of 32% of women who were diagnosed at the early stage of cervical cancer were between the age of 20 and 39 years in our institution. Moreover, as more women are delaying child-bearing, preservation of fertility and reproductive function is a major concern when young women are counseled with regard to effects of treatment for cervical cancer. Although radical hysterectomy and radiotherapy are the only treatment options for women with invasive cervical cancer, they do not spare fertility.

To tailor treatment to provide fertility-sparing options without compromising oncologic outcome, radical trachelectomy (RT) abdominally or vaginally coupled with pelvic lymph node dissection has been performed for over 20 years since first described by the French gynecologist Dargent in 1987 [2]. In our institution, a total of 26 abdominal RTs were performed between 2006 and 2011.

Plante et al. [3] followed up 125 women who had had RT with 106 pregnancies in 58 women but 13.5% had subfertility problems requiring assisted conception. Although it is well known that subfertility is due to isthmic stenosis with adhesion formation and a lack of cervical mucus to aid sperm migration, there are few reports on whether RT affects ovarian reserve and the response to controlled ovarian stimulation.

Anti-Müllerian hormone (AMH) is a member of the transforming growth factor-β superfamily, which includes several related peptides including activins, inhibins and growth differentiation factors [4]. In women, AMH is produced by granulosa cells, from pre-antral and antral follicles [5] and the main physiological role of AMH in the ovary appears to be limited to inhibition of the early stages of follicular development [6][7]. Recently, AMH has been evaluated by several groups as a potential novel clinical marker of ovarian reserve and of the response to gonadotropins [8-18].

This study aimed to evaluate the effect of radical trachelectomy on ovarian reserve and compared it with abdominal radical hysterectomy (ARH) and women who did not have surgery by measuring serum AMH levels.

This study was approved by the institutional review board at Hyogo Cancer Center.

A total of 26 abdominal radical trachelectomies (ARTs) with pelvic lymphadenectomy were performed in the department of Gynecologic Oncology at Hyogo Cancer Center from September 2006 to March 2011.

Our eligibility criteria for ART included the following: a desire to preserve fertility; a confirmed diagnosis of cervical cancer; localized cancer of the uterine cervix; FIGO stage Ia to Ib1; a tumor size less than 2 cm; and no evidence of metastasis on preoperative pelvic magnetic resonance imaging, positron-emission tomography, and chest X-ray.

Four patients needed to have hysterectomy because of per- or postoperative findings. One patient had severe pelvic lymphocyst infection with secondary amenorrhea, and she needed to have complete resection of the uterus and drainage 9 months after ART. Three patients were moved to other hospitals. Therefore, 18 women were enrolled for this retrospective study. To compare the level of AMH due to a difference in blood supply, we enrolled 16 women who had abdominal radical hysterectomy (ARH) performed with ovary conservation in this study. Data of serum AMH in 10,186 women of the control group were provided by the Japanese Institution for Standardizing Assisted Reproductive Technology (JISART) group. Median age of control group is 36.1 (range 25-47).

Laparotomy and a complete pelvic lymphadenectomy were performed with a similar technique by undergoing a radical hysterectomy. All lymph nodes were sent for frozen section analysis. If lymph node metastasis was confirmed, ART was abandoned and we continued with radical hysterectomy. To preserve sufficient blood flow to the uterus, we identified the uterine artery and cut the only descending branch. After completing resection of the paracervical soft tissues including the parametria, paracolpos, and uterosacral ligaments, we made an incision in the vaginal wall. The tumor extent was identified, and we separated the cervical tissue and parametria from the fundus. This specimen was sent for frozen sectioning to evaluate the endocervical and vaginal margin.

If we confirmed a negative margin, the uterus was reconstructed to the upper vagina using 1-0 polydioxanone suture.

A total 34 patients were included in this study. Eighteen patients had ART performed and 16 patients had ARH performed. Their clinical characteristics are shown in Table 1. There were no significant differences in mean age, the period from the operation to blood sampling, and body mass index between the two groups. Among these patients, nobody have polycystic ovaries and a history of infertility before operation and 32 out of 34 patients (94.1%, 16 in ART and 16 in ARH ) have a regular menstrual period after operation. One patient who received ART conceived naturally and delivered by cesarean section at 30 weeks gestation. Mean (±SD) serum AMH levels were greater in the ART group (3.9±2.4 ng/ml) compared with those in the ARH group (2.4±1.9 ng/ml) (P<0.05). We compared serum AMH levels of the two groups with those of women who did not have surgery as normal controls (Fig. 1). Serum AMH levels were not significantly different between the ART and control groups (P=0.49). However, serum AMH levels in the ARH group were significantly lower than those in the control group (P=0.02).These data indicated that ART did not affect ovarian function with respect to ovarian reserve and the response to ovarian stimulation. There were eight women (8/18, 44.4%) whose serum AMH levels were lower than mean normal control values. Among them, four patients had a postoperative inclusion cyst in the pelvic area and one patient had secondary amenorrhea after ART (Table 2). Ten women whose serum AMH levels were above mean normal control levels had no complications (P=0.022).

Comparison of serum AMH levels between ART, ARH, and a control group of women who did not have surgery in relation to age. 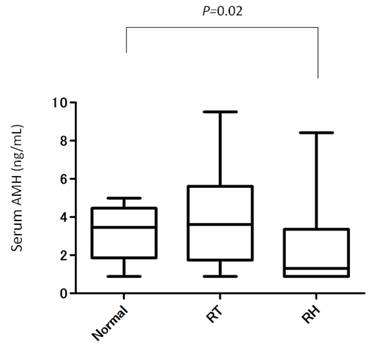 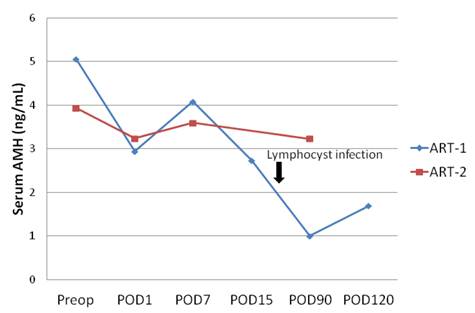 Radical trachelectomy is a feasible procedure for young women with early-stage cervical cancer. VRT predominate as a fertility-sparing surgical procedure and favorable oncologic and obstetrical outcomes were reported [3]. ART is a relatively new procedure and some studies have suggested that ART is feasible as a fertility-preserving procedure [19][20]. However it is major concern that women with ART were less likely to conceive than were women with VRT. It is presumed that the causes of infertility are cervical problems, pelvic adhesion formation with a long operation time, ischemia, excessive sutures, and alteration of uterine and ovarian blood flow by resection of the uterine artery [20][21]. In our institution 78% of women try to conceive and 4 of these women employed assisted reproductive techniques. However there was only one woman who conceived successfully and had a live birth.

This is the first study that attempted to investigate ovarian function after ART by measuring serum AMH levels. We found that serum AMH levels in patients with ART were significantly higher than those of patients with ARH. In our institution, to preserve sufficient blood flow to the uterus, we identified the uterine artery and cut the only descending branch. Because the ascending portion runs alongside the uterus and passes anterior to the ureter and anastomoses with the ovarian artery, preservation of the uterine ascending arteries may contribute to the maintenance of ovarian function.

Unfortunately preoperative AMH level were not shown in this study, however we could demonstrated that serum AMH levels were not significantly different between the ART and control groups. The purpose of performing ART for early cervical cancer is not only to achieve a definitive surgery, but also to achieve pregnancy after surgery. AMH levels lsess than 0.7ng/ml has been proposed for identification of poor responders of IVF [18][23], women whose preoperative AMH levels were identified low levels recommend to perform ARH better than ART.

In conclusion, we found that serum AMH levels in patients with ART were significantly higher than those in patients with ARH. However, postoperative inclusion cysts or pelvic infections are associated with a decreased ovarian reserve. Our study suggests that serum AMH levels could be useful as a marker of ovarian reserve after ART and that it is necessary to avoid postoperative complications causing a reduction in ovarian function to accomplish fertility-sparing surgery.

We thank the JISART group for data collection and Ms Ushio and Kinoshita for their excellent technical assistance.