Background: Metastatic renal cell carcinoma (RCC) to the liver portrays a poor prognosis and liver directed therapy remains controversial. We aimed to determine potential selection criteria for patients who might benefit from this strategy.

Materials and Methods: We evaluated 247 consecutive patients with RCC metastatic to the liver from a prospectively maintained database.

The incidence of renal cell carcinoma (RCC) is rising with approximately 58,240 new cases and 13,040 deaths estimated for 2010 [1]. 30% of patients with RCC will present with metastases and upwards of 50% of patients will develop metastatic disease with 20 to 40% of patients having disease in the liver [2]. Metastatic RCC portends a poor prognosis and is relatively resistant to systemic therapy. 5-year survival rates are poor with only 20% of patients surviving with metastatic disease [3]. Median survival in these patients has been measured to range from 10 to 20 months. Patients with hepatic disease have been found to live a median of 7.4 months [4]. As with other solid cancers metastatic to the liver, once RCC metastasizes to the liver it is often the rate-limiting step for survival.

Currently, there is a paucity of data to support liver directed therapy for metastatic RCC. Although, survival could be significantly improved after resection of lung metastases, treatment of liver metastases with either surgery or radiofrequency ablation (RFA) remains uncommon and controversial [3]. To date, there are only 20 published studies involving liver resection for RCC with only 7 series reporting on more than ten patients (Table 1) [3]. Therefore, we investigated our experience with liver directed therapy for RCC in order to determine potential selection criteria for patients who might benefit from this strategy.

Inclusion criteria included patients who underwent liver resection or RFA for pathologically confirmed RCC metastatic to the liver. Patients were excluded if liver therapy was not delivered at the NCI, final pathology was benign, liver resection occurred for extension of the primary into the liver, and patients who received systemic therapy only. Median age of patients who underwent liver resection was 47 (range 32 - 58), RFA 56 (range 44 - 78) and overall 51 (range, 32 - 78). Fourteen patients were male and 4 female. At the time of primary diagnosis 11 patients had stage IV disease (5/11 liver, 5/11 lung, 2/11 pleural, 1/11 brain, 1/11 bone ), 6 patients stage II and 1 patient stage I. Patients and tumor specific characteristics are depicted in Table 2.

Liver metastases were metachronous in thirteen patients and synchronous in five patients. The median time to development of liver metastases from the primary operation was 19.5 months (range, 0 to 142). Fourteen patients had single (surgery 7, RFA 7) and four (surgery 3, RFA 1) had multiple liver lesions, respectively. Median size of lesions was 5cm (0.5 - 10cm) and 2.5cm (1 - 6cm) in the surgery and RFA groups respectively. Fifteen lesions were within the right liver (surgery 9, RFA 6), two in the left (surgery 1, RFA 1) and one unknown (RFA). Five patients underwent right lobectomy, four wedge resections, one extended right hepatectomy and eight RFA. In those undergoing surgical resection all were rendered free of disease in the liver and 7/10 patients had no evidence of disease (NED) systemically. For those receiving RFA, two patients had an open RFA accompanying resection of extra-hepatic disease and the remaining six patients had percutaneous RFA leaving extra-hepatic disease following liver directed therapy. Details are depicted in Table 3.

For the whole cohort, 1, 3 and 5-year actuarial survivals were 89%, 40%, 27%. Actuarial survivals for the surgery and RFA groups were not significantly different, with 1, 3 and 5 year probabilities of survival of 79%, 45%, 34% and 100%, 33, and not reached, respectively (p= 0.56, Figure 1). Median overall survival for the surgery cohort was 24 (3 to 254+) months, and for the RFA cohort 15.6 (7-56+) months. Synchronous disease was found to be negatively associated with survival in surgery patients. Those undergoing synchronous resections lived a median of 1.1 years following liver resection compared to 5.7 years in those resected in the metachronous setting (p = 0.02; Figure 2).

Overall survival of the 18 patients who underwent liver resection (n = 10) or radiofrequency ablation (n = 8) for metastatic renal cell carcinoma. The 5-year actuarial survival was 27% for all patients. 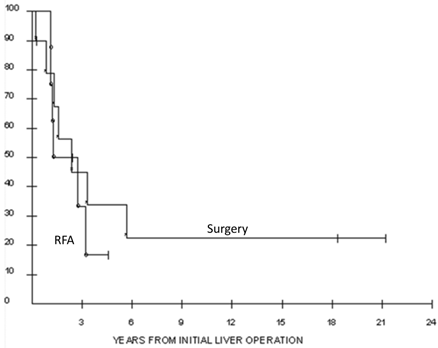 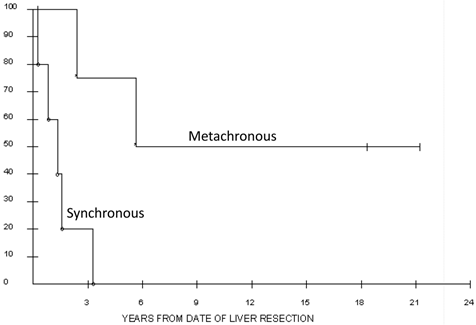 Approximately, 80% of patients with renal cell carcinoma will develop metastases; of these, 20-40% will develop liver disease. Historically, liver metastases have been an ominous prognostic feature. In fact, those with hepatic disease have been found to live a median of 7.4 months [4]. One may therefore state that tumor burden in the liver is often a rate limiting step for survival. The poor outcome of patients with liver metastases may partly be explained by the fact that, in most cases, liver metastases are multiple and occur in association with metastases to other sites which is in accordance with the hematogenous pattern of spread of RCC [5]. In fact, liver metastases of RCC are solitary in only 2 to 4% of cases [5]. The question, which therefore remains, is whether liver directed therapy with or without extra hepatic disease is associated with increased survival?

Response to systemic therapy remains poor. Objective response rates are only seen in 15% of patients with high dose IL-2 and chemotherapy responses remain inferior. In the modern day of hepatobiliary surgery mortality rates are low (0 - 2%) and morbidity rates are reasonable (33%) [3]. Thirty percent mortality associated with liver resection is no longer the case [6]. That being said, liver resection for metastatic RCC remains controversial and there is even less data supporting the use of RFA. Historically, the majority of literature documenting resection of RCC liver metastases came from case reports or small numbers of RCC patients included in liver resection manuscripts for noncolorectal, nonneuroendocrine metastases [7] [8] [9]. More recently there have been four particular studies with 15 or more patients that produced thought provoking results. Median survival rates in these recent studies for patients undergoing resection ranged from 24 to 142 months and when compared to historical controls resection remained superior (Table 3). However, one should remain cognizant that all of these data sets are based on relatively small numbers of patients, biased and without relevant control groups in the majority of studies.

A more recent study was a comparative study in which Staehler et al reviewed patients undergoing liver resection for RCC and used a population of patients who refused liver resection as their control. To date, this is the only comparative study in the literature. They published a median survival of 142 months for patients undergoing liver resection for RCC with a median 5-year survival of 62.6% [3]. These results were superior to the control. Moreover, in contrast to previous studies these long term results are not inferior to survival rates achieved with liver resection for colorectal metastases and are comparable to survival results of resection of pulmonary metastases for RCC, which are currently both generally accepted indications for an aggressive surgical approach [3] [10].

The other finding in this study was that synchronous liver metastases at initial diagnosis was associated with a significantly lower survival than metachronous metastases. Median survival was 155 months with metachronous metastases compared to 29 months in the synchronous group [3]. Note that although the long term median survival could be influenced by the high proportion of patients (79%) receiving systemic therapy late in the course of disease, there was an equal proportion of patients treated systemically in the synchronous group [3]. Although, one cannot conclude that the survival difference between the two groups may be an expression of liver resection however it certainly indicates that further studies should be performed in a scientific manner.

Although proper selection criteria have yet to be established, the above studies have documented positive prognostic factors. Studies indicate that improved survival was seen when the disease free interval (DFI) to liver metastases was greater than 24 months, metastases were less than 5cm and a R0 resection was performed [2] [10]. However, Thelen et al found that even in patients with a short DFI long-term survival can be achieved by hepatectomy [10].

Unfortunately recurrence rates are high in those with metastatic RCC. Most studies (including our own) found that the disease recurs in the majority of patients following hepatectomy. In fact, many patients (50%) will recur within the first year [2]. Although there is a paucity of data, repeat resection has been advocated by a number of groups. In particular, Aloia et al. found that patients who had recurrences in the liver following resection and underwent repeat hepatectomy experienced longer survival when compared to patients who were not re-resected [2]. Further, Alves et al stated that due to the constant tumor recurrence observed after liver resection an aggressive policy to treat hepatic metastases was associated with prolonged survival as demonstrated by the improved outcome of patients who were submitted to repeat hepatectomy [5]. One may postulate that repeat resection may have the ability to prolong remission when the tumor recurrence occurs in the liver. A finding that a subset of patients with resectable recurrences have longer survival rates when compared to patients with unresectable recurrences supports the argument that surgery with favorable biology may be responsible for improved outcomes [2]. Therefore, we advocate close clinical follow up with computed tomography imaging in all resected or ablated patients.

In at least one multivariate model, debulking of greater than 90% of RCC metastases was associated with a significantly increased survival [11]. Therefore, one may presume that liver directed therapy for RCC may have increased efficacy if used in a multidisciplinary fashion. Kim et al concluded that surgical resection when performed in patients found to have a partial response to interleukin-2 for metastatic RCC increased survival [12]. We believe that in this era of new systemic options such as tyrosine kinase inhibitors and other targeted based therapies, a more aggressive surgical approach may be appropriate for patients with advanced RCC [11].

When analyzing all recent studies published (Table 1) 5 year survival rates are superior to historical controls with the most recent and largest two studies showing 5 year survival rates of 43 - 62% [3] [13]. Moreover, these results compare favorably to those of hepatic resection for hepatic metastases [13]. Our series of patients adds to this limited data set and will hopefully lead to hypothesis generation in order to formulate further trials. Limitations to our study are clear. It is a retrospective analysis with a small sample size and there is a selection bias for all patients who were treated at the National Cancer Institute, NIH. We believe concrete survival conclusions cannot be drawn from this small sample size however; the results are intriguing and may help further other studies. Moreover, we argue that in the absence of alternative treatments of demonstrated efficacy and the poor natural prognosis of liver metastases from RCC an aggressive policy for achieving tumor eradication may offer a chance for long-term survival.

Although RCC metastatic to the liver portends a poor prognosis, our data and others suggest that, for some patients, liver resection may potentially result in improved survival. In our series, when compared to RFA, liver resection resulted in a trend for a longer median survival. We propose that liver resection is safe and should be considered only in highly selected patients with metachronous disease and in a multidisciplinary manner.

This research was supported [in part] by the Intramural Research Program of the NIH, National Cancer Institute.