Lung cancer metastases to the prostate are uncommon, and are usually found incidentally during autopsy. This case report describes a 77-year-old man with a large cell neuroendocrine carcinoma (LCNEC) of the lung and metastases from this primary cancer in the prostate. During the follow-up after the chemotherapy performed for pulmonary LCNEC, pelvic computed tomography revealed a prostatic tumor and prostatic needle biopsy was performed. Histologically, the tumor was identified as LCNEC, forming a tissue architecture closely resembling the previously diagnosed lung cancer. The tumor cells were immunohistochemically positive for thyroid transcription factor-1. These findings led to a diagnosis of prostatic metastasis of pulmonary LCNEC.

Although prostatic invasion by bladder or rectal cancer reportedly occurs, hematogenous metastasis from distant organs to the prostate is extremely rare [1-3]. We herein report a case of prostatic metastasis of pulmonary large cell neuroendocrine carcinoma (LCNEC).

A 77-year-old man noted a swelling in the right neck and was referred to our department. Chest computed tomography (CT) revealed a tumor extending along the bronchus in the S6 region of the left lung, mediastinal lymphadenopathy, and a mass in the left chest wall (Figure 1A and 1B). The tumor marker NSE level (institutional cutoff value, 15.0 ng/mL) was elevated to 81.0 ng/mL, and ProGRP (institutional cutoff value, 46.0 pg/mL) to 346 pg/mL (Figure 2). LCNEC was diagnosed by bronchoscopic brushing cytology of the S6 tumor. Histologically, right cervical lymph node biopsy revealed solid nests of large tumor cells with finely granular chromatin and small nucleoli (Figure 3A and 3B). On immunostaining, the tumor cells were positive for cytokeratin AE1/3, thyroid transcription factor (TTF)-1 and N-CAM, leading to a diagnosis of metastasis of pulmonary LCNEC (Figure 3C, 3D and 3E). The patient received four courses of carboplatin and etoposide combination chemotherapy, achieving a complete response, with a normalization of NSE and ProGRP (Figure 2).

Radiological findings. (A, B) Chest CT revealed a peribronchial tumor in the S6 of the left lung and bulky mediastinal lymphadenopathy. The arrow indicates the lymphadenopathy in the left chest wall. (C) During post-chemotherapy follow-up, pelvic CT revealed a massive tumor in the prostate. (D) PET/CT demonstrated marked FDG uptake (SUVmax=19.0) in the prostatic tumor. 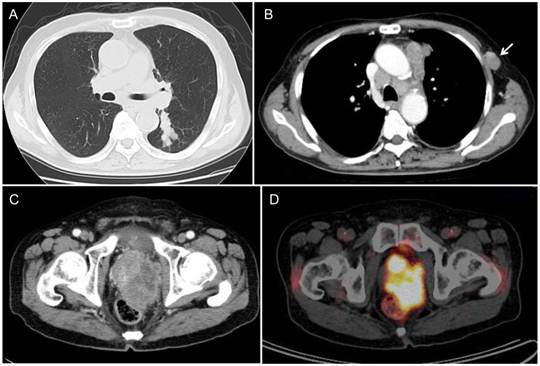 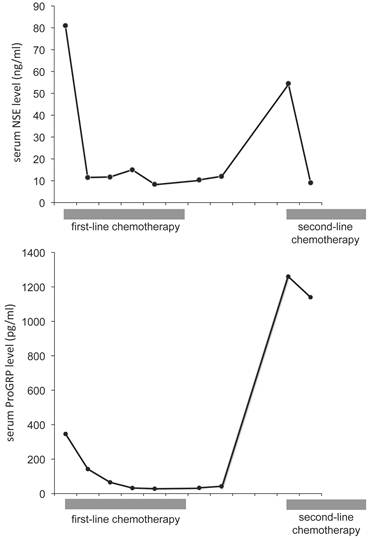 The prostatic tumor was inhomogeneous, with irregular borders and compression of the urinary bladder and rectum. PET/CT showed FDG uptake in the mediastinal lymph node and in the prostatic tumor (Figure 1D). The tumor markers NSE and ProGRP were re-elevated to 54.5 ng/mL and 1,260 pg/mL, respectively (Figure 2), but the PSA was normal. Either prostatic metastasis of lung cancer or primary prostate cancer was suspected, and prostatic needle biopsy was performed. Histologically, the biopsy specimen showed tumor cell infiltration between normal prostate tissue and an absence of prostatic intraepithelial neoplasia in the adjacent glands (Figure 4A). The tumor grew in solid organoid nests consisting of polygonal tumor cells with abundant, finely granular chromatin and small nucleoli (Figure 4B). Immunostaining of the tumor cells was positive for cytokeratin AE1/3, TTF-1 and N-CAM (Figure 4C, 4D and 4E). These findings are similar to those of the neck lymph node biopsy specimen, leading to a diagnosis of prostatic metastasis of pre-existing lung cancer.

The chemotherapy regimen for pulmonary LCNEC, which included carboplatin with irinotecan as the second-line and amrubicin as the third-line therapy, was resumed, resulting in shrinkage of the enlarged prostate. The symptoms of urinary retention improved and surgical intervention, such as urethral stent placement and transurethral tumor resection, was not required. Although prostate metastasis remained regressed and no metastases were found in the brain, bone or liver, the patient developed multiple pulmonary metastases 10 months after the completion of the third-line chemotherapy and died of respiratory failure. Autopsy was not performed.

Histology of a neck lymph node biopsy specimen. (A) Histologically, solid nests with peripheral palisading were observed. (B) The nuclear chromatin ranges from fine to vesicular and many cells have small nucleoli. (C-E) On immunohistochemical staining, the tumor cells were positive for cytokeratin AE1/3, TTF-1, and N-CAM, respectively (C, cytokeratin AE1/3; D, TTF-1; E, N-CAM). 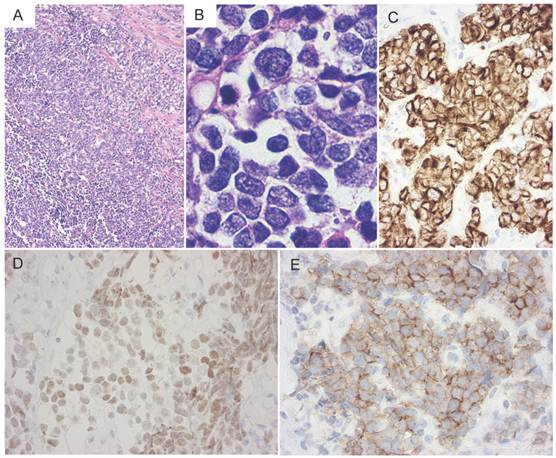 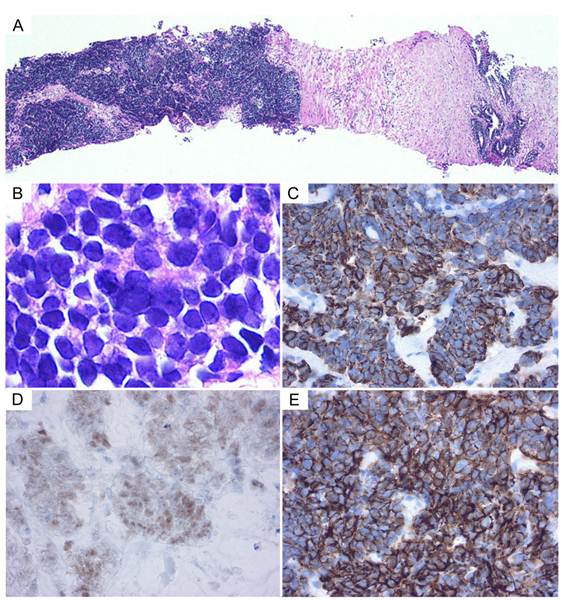 LCNEC of the lung is a variant of a large cell carcinoma which exhibits neuroendocrine architectural features and immunohistochemical or ultrastructural evidence of neuroendocrine differentiation [4, 5]. The majority of previous studies reported that LCNEC is associated with poor survival compared to stage-matched non-small cell lung cancer, approaching the very poor prognosis of small cell lung cancer [6-8]. LCNEC accounts for approximately 3% of all pulmonary malignancies [9, 10].

The urogenital tract is an unusual site of metastasis. Johnson et al. analyzed 1,474 autopsy cases of malignant prostate disease, and identified a metastatic prostatic lesion in only a total of 18 cases (1.2%) [2]. The primary tumor site was a melanoma in 9 cases and lung cancer in 5. Secondary prostatic malignancies are mainly due to an invasion by bladder or rectal cancer, and are rarely metastatic in origin.

A search of the literature revealed only one previously reported case of prostatic metastasis of pulmonary LCNEC. Yoo et al. reported a 70-year-old man with pulmonary LCNEC and metastases in the prostate, brain, bone, liver, and lymph nodes [11]. Their patient showed multiple organ metastases at the first examination, and he died after only 6 days of chemotherapy. In our case, fortunately, the chemotherapy seemed to be comparatively effective in terms of a period of event-free survival.

Reports of LCNEC arising in the prostate, defined by the criteria for pulmonary LCNEC, are extremely rare, but in this case, prostatic metastasis of the pulmonary LCNEC needed to be differentiated from primary prostatic LCNEC [12, 13]. In the presence of pre-existing primary pulmonary LCNEC, the prostate tumor appeared to progress in accordance with the tumor marker levels. There was no increase in serum PSA, which is specific to primary prostate cancer. The prostate biopsy specimen was composed of normal prostate tissue mixed with tumor tissue resembling that of the previously diagnosed lung cancer. In addition, the tumor cells were immunohistochemically positive for TTF-1. These findings led to a diagnosis of hematogenous metastasis of pulmonary LCNEC to the prostate. This case suggests the need to actively perform a prostate biopsy for an accurate diagnosis. In addition, TTF-1 immunostaining, normally positive in lung cancer, is suggested as a means of differentiating primary lung cancer from primary prostate cancer [14].