Purpose: We conducted a meta-analysis to evaluate and compare the short- and long-term results of laparoscopy-assisted colectomy (LAC) and open colectomy (OC) for colon cancer.

Results: We selected 12 papers reporting RCTs that compared LAC with OC for colon cancer. Our meta-analysis included 4614 patients with colon cancer; of these, 2444 had undergone LAC and 2170 had undergone OC. In the short-term period, we found that the rates of overall postoperative complications and ileus in LAC were lower than in OC groups. LAC was associated with a reduction in intraoperative blood loss, a shorter duration of time to resumption and hospital stay, and lower rates of overall complication and ileus over the short-term, but with similar long-term oncologic outcomes such as overall and cancer-related mortality, overall recurrence, local recurrence, distant metastasis, and wound-site recurrence, compared to OC.

Conclusions: It is suggested that LAC may be preferred to OC for colon cancer.

Colon cancer is one of the most common types of cancer in developed countries, and surgery is the only curative treatment. Successful laparoscopy-assisted sigmoidectomy for colon cancer was first described in 19911 and has since then been widely applied by surgeons to treat patients with colon cancer.

Several articles have reported the short-term advantages of laparoscopy-assisted colectomy (LAC) over conventional open colectomy (OC) and have concluded that laparoscopic surgery causes less pain, results in better pulmonary function, shortens the duration of postoperative ileus, reduces fatigue, and offers a better quality of life2-5. However, the benefits of LAC have remained controversial because the long-term outcomes have not yet been clarified. To accurately evaluate the efficacy of laparoscopic surgery for colon cancer, the short- and long-term outcomes of laparoscopic surgery must be compared to those of open surgery. For short-term outcomes, perioperative variables, pathologic factors, and the cost of surgery should be examined. For long-term outcomes, long-term oncologic results are the primary endpoint of interest. The long-term oncologic outcomes of LAC, such as tumor recurrence rate and mortality rate, have been published over time6-9. Several randomized control trials (RCTs) that compare LAC with OC have been reported 6-25. Therefore, we conducted a meta-analysis of the data obtained from these RCTs and compared the short- and long-term outcomes of LAC and OC by considering several factors.

To identify papers relevant to our study, we searched through the major medical databases such as MEDLINE, EMBASE, Science Citation Index, and Cochrane Controlled Trial Register for studies published between January 1990 and October 2011. The following search terms were used: “laparoscopy,” “laparoscopy-assisted,” “surgery,” “colectomy,” and “colon cancer.” Furthermore, we limited our literature search to randomized controlled trials. We treated studies that were part of a series as a single study. The appropriate data from such study series were used for this meta-analysis. This meta-analysis was prepared in accordance with the Preferred Reporting Items for Systematic Reviews and Meta-Analyses (PRISMA) statement26 (Fig.1).

To enter this meta-analysis, studies had to: (1) be described in English (2) be randomized controlled trials (3) compare laparoscopic and open conventional surgery for colon cancer (4) report on at least one of the outcome measures mentioned below.

Flow diagram of this meta-analysis in accordance with PRISMA Statement. 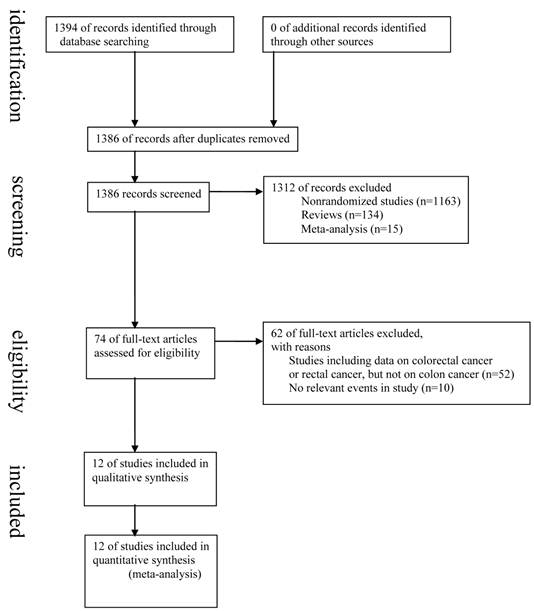 Three researchers (H.O., Y.T., and Y.A.) extracted data from each article by using a structured sheet and entered the data into a database. Because this analysis was based on the intention-to-treat principle27, all patients converted from the laparoscopic group to the conventional open surgery group remained in the laparoscopic group for analysis. We conducted separate meta-analyses for 2 different postoperative time periods: short-term and long-term. For the short-term analysis, we collected data on operation time, estimated blood loss, number of transfused patients, number of dissected lymph nodes, time to resumption, hospital stay, incision length, overall postoperative complications, ileus, anastomotic leakage, perioperative mortality, circumferential resection margin, oral resection margin, distal resection margin, and cost of surgery. We also examined the relationship between the conversion rate from laparoscopic to open surgery and single-institution versus multicenter trials. For the oncologic results in the long-term analysis, we used data on the rate of overall recurrence, local recurrence, distant metastasis, peritoneal dissemination, wound-site recurrence, overall mortality, and cancer-related mortality. If necessary, we contacted the authors of the original article to collect further information.

Weighted mean differences (WMDs) and odds ratios (ORs) were used for the analysis of continuous and dichotomous variables, respectively. Random-effects models were used to identify heterogeneity between the studies29, and the degree of heterogeneity was assessed using the χ2 test. For the analysis of the conversion rate, the χ2 test was used. The confidence interval (CI) was established at 95%, and p values of less than 0.05 were considered to indicate statistical significance.

As the cost data of 1 article21 were precious and had neither a range nor any other measure of dispersion, the standard deviation (SD) was estimated by halving the mean30. One Euro and British pound were converted to 1.4 and 1.6 US dollars, respectively. Statistical analyses were performed using the Review Manager (RevMan) software version 5.1.4 provided by the Cochrane Collaboration, Copenhagen, Denmark.

We identified 12 RCTs that compared LAC and OC for colon cancer6-25. The characteristics of each RCT are presented in Table 1. Our meta-analysis included 4614 patients with colon cancer; of these, 2444 had undergone LAC, and 2170, OC. The results of the outcomes over short- and long-term periods are shown in Fig. 2 and Fig. 3, respectively.

Meta-analysis of the short-term period for colon cancer 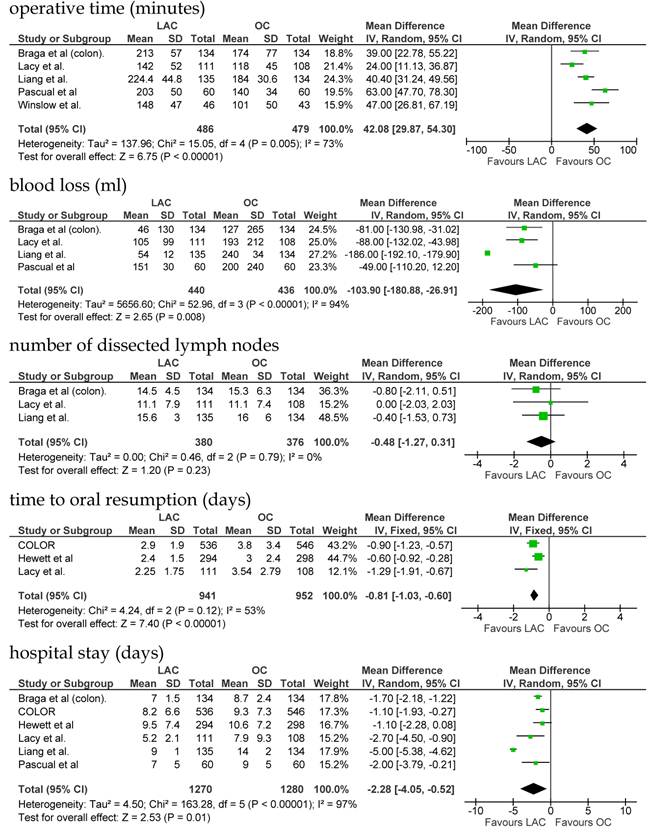 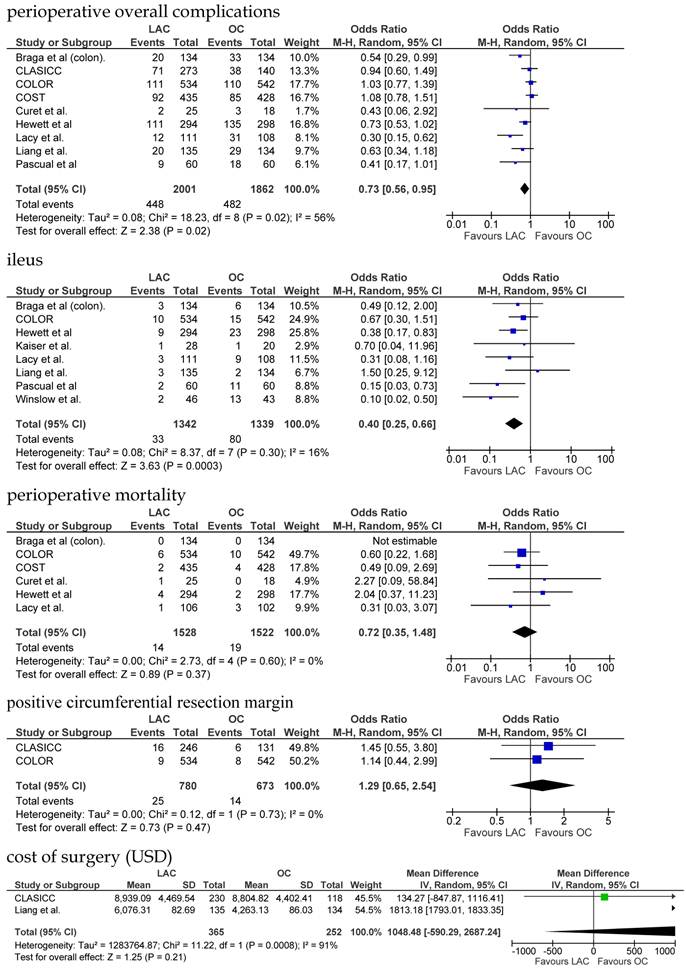 Meta-analysis of the long- term oncologic results for colon cancer 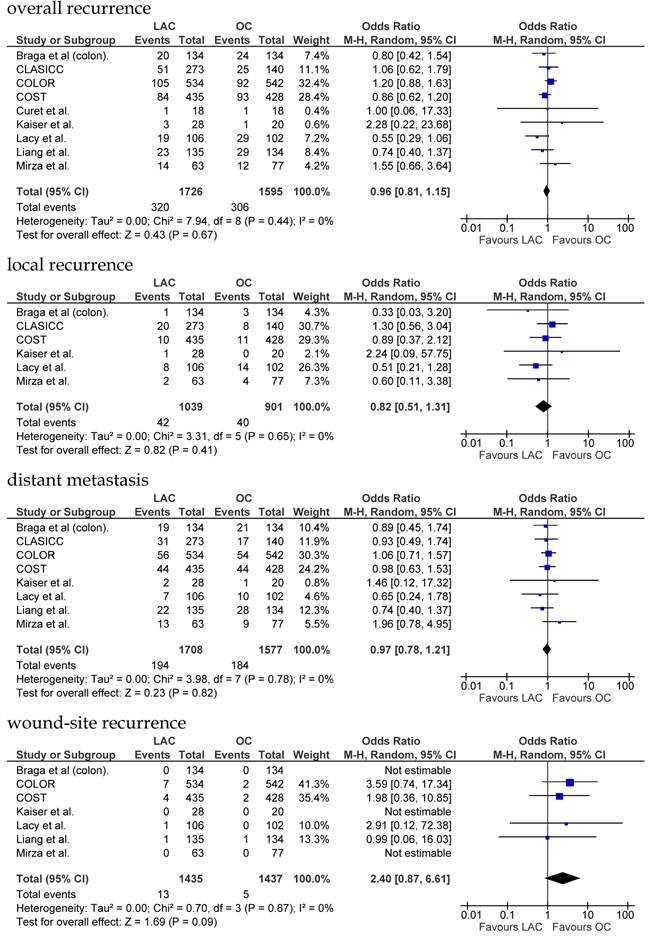 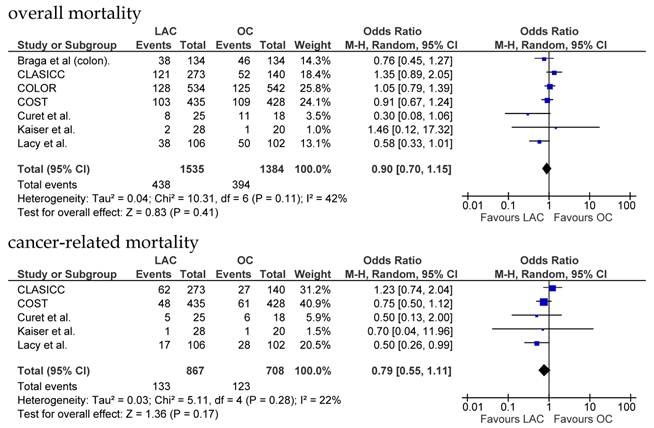 In an analysis of the total cost of surgery, there was no significant difference between the 2 groups.

Twelve articles reported data on the conversion rate from laparoscopic to open surgery, which ranged from 3 to 46.4% (Table 1). In an analysis of the conversion rate, there was no significant difference between the trials performed by a single institution and those performed on a multicenter basis (p = 0.31).

In short-term periods, laparoscopic surgery for colon cancer is associated with a significantly longer operative time, but significantly less intraoperative blood loss compared with conventional open surgery. These results are consistent with those of recent randomized controlled trials 8,13,15. Potential explanations for the abovementioned results include meticulous dissection facilitated by instruments for laparoscopic surgery and videoscopic magnification. The similarity of oncological outcomes such as circumferential, oral, and distal resection margin and the number of harvested lymph nodes between the 2 groups indicates identical quality of the operative techniques. Patients who underwent LAC resumed oral intake significantly earlier and had significantly shorter hospital stays than did patients who underwent OC; this finding suggests that LAC leads to faster recovery. The rate of postoperative complications was significantly lower in LAC than on OC. In examining the details, we found the rate of ileus significantly lower in LAC than in OC. Gutt et al. describe that laparoscopic surgery reduces adhesion formation compared with open surgery. Because laparoscopic procedures reduce the overall degree of trauma to the abdominal wall, intraabdominal operative site, and distant intraabdominal organs, they potentially have an advantage in reducing the formation of postoperative adhesion31. The abovementioned suggests that LAC may be safer and more feasible than OC.

In the analysis of the total cost of surgery, we found no significant overall difference between LAC and OC. However, the operating costs were higher and the hospitalization costs were lower for LAC compared with OC.

Several reports have shown that conversion from laparoscopic to open surgery is associated with inferior surgical outcomes6. In this analysis, the conversion rate was not significantly related to the type of study, i.e., single-institution or multicenter. The CLASICC trial reported that tumor infiltration/fixation and obesity were the most common reason for conversion13.

Significant heterogeneity was observed for operative time, intraoperative blood loss, duration of hospital stay, incision length, overall postoperative complications, and cost of surgery in the short-term period. The reason for the observed heterogeneity in operative time, intraoperative blood loss, and overall postoperative complications may be variations in the skill of the surgeon and the condition of the tumor. Differences in the clinical approach at different institutions may have caused the heterogeneity in the duration of hospital stay and incision length. Significant heterogeneity for cost of surgery may be caused by differences in medical fees among countries.

In conclusion, this meta-analysis showed that laparoscopic surgery for colon cancer is associated with a reduction in intraoperative blood loss, earlier resumption of oral intake, shorter duration of hospital stay, and rate of postoperative complications concluding ileus over the short-term, but is associated with similar short-term and long-term oncologic outcomes compared to conventional open surgery. Therefore, it is suggested that laparoscopic surgery may be preferred to conventional open surgery for colon cancer.