Hepatic sinusoidal obstruction syndrome is commonly described in pediatric oncology as a complication of chemotherapy. It has also been occasionally reported in adult cancer patients. Treatment is largely supportive with fluid restriction. A 16-month-old girl with stage II Wilms tumor receiving post-nephrectomy chemotherapy with dactinomycin and vincristine developed hepatic sinusoidal obstruction syndrome with painful hepatomegaly, ascites with significant weight gain, grossly deranged liver function, severe thrombocytopenia, and reversal of blood flow in the portal vein on Doppler sonography. Treatment with N-acetylcysteine was followed by complete resolution of clinical signs and amelioration of laboratory abnormalities within 72 hours of treatment. N-acetylcysteine is a safe and probably an effective treatment for dactinomycin-induced hepatic sinusoidal obstructive syndrome.

Hepatic sinusoidal obstruction syndrome (SOS), previously known as veno-occlusive disease, is a frequent complication with significant mortality after myeloablative chemotherapy and hematopoietic stem cell transplantation [1,2]. It is uncommon in the setting of conventional chemotherapy but tends to happen in children receiving dactinomycin treatment [3,4]. Hepatic SOS after chemotherapy is usually treated with supportive care with meticulous attention to fluid balance and restriction. While treatment with antithrombotic or fibrinolytic agents and other agents has been attempted with variable success in hepatic SOS after stem cell transplantation [5,6], the efficacy of pharmacological intervention has not been systematically studied in dactinomycin-induced SOS. In this report, we describe a child with Wilms tumor who developed moderately severe SOS that resolved rapidly after treatment with N-acetylcysteine.

A 16-month-old girl was receiving chemotherapy with vincristine and dactinomycin (Regimen EE-4A) for a left-sided Wilms tumor, clinicopathologic stage II with favorable histology, after nephrectomy. No radiotherapy was required. On the day she received the fifth weekly dose of vincristine (0.05mg/kg), exactly seven days after the second dose of dactinomycin (0.045mg/kg, single-dose), she was noted to have a falling platelet count of 51 × 109/L and hemoglobin of 8.1 g/dL. The clinical examination was otherwise unremarkable and she was discharged after the vincristine injection and an erythrocyte transfusion. In the evening she started to have repeated vomiting with a temperature of 38°C. She was re-admitted the next day with 5% dehydration. There was no jaundice or hepatosplenomegaly. Complete blood counts showed Hb 14.0 g/dL, white cell count 6.76 × 109/L, and platelet 14 × 109/L. Liver function was deranged with alanine transferase (ALT) of 74 u/L and aspartate transferase (AST) of 214 u/L but normal albumin (41 g/L) and bilirubin (19 µmol/L) levels. Her general condition improved after fluid resuscitation and the vomiting stopped after treatment with intravenous granisetron.

On the third day of admission, her condition deteriorated with recurrence of vomiting, abdominal pain, and abrupt onset of abdominal distention, with a weight gain of 0.5 kg from the baseline of 9.5 kg. The liver was palpable at 3 cm below the costal margin and was firm in consistency. Spleen tip and signs of shifting dullness were detectable. There was persistent severe thrombocytopenia despite platelet transfusion on the day of admission. Serum ALT and AST were grossly elevated at 746 u/L and 1,660 u/L, respectively, and albumin dropped to 26 g/L. Prothrombin time was prolonged at 16.7 s (normal, 10-14 s) while partial thromboplastin time (40.7 s) was still within normal limits. An urgent ultrasonography and Doppler examination of the liver revealed hepatosplenomegaly and gross ascites. Blood flow in the portal vein was reversed (Fig. 1). The resistance in the hepatic artery was increased with peak systolic velocity of 2.95 m/s (normal, 0.4 m/s) and a resistive index of 0.67. Small bilateral pleural effusions were present. 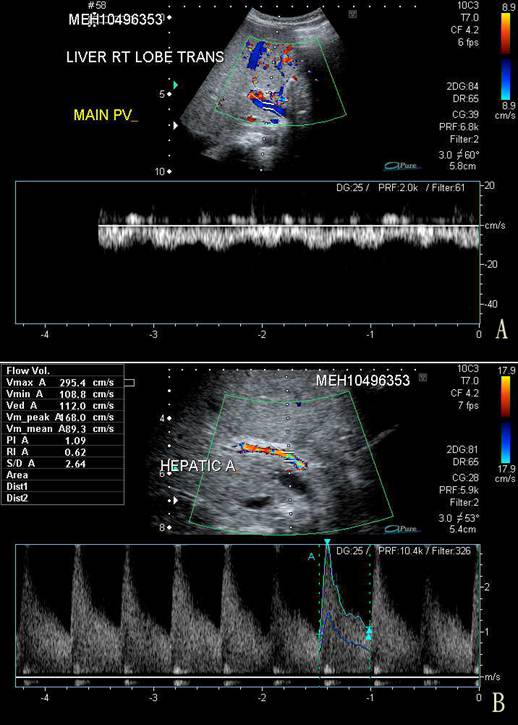 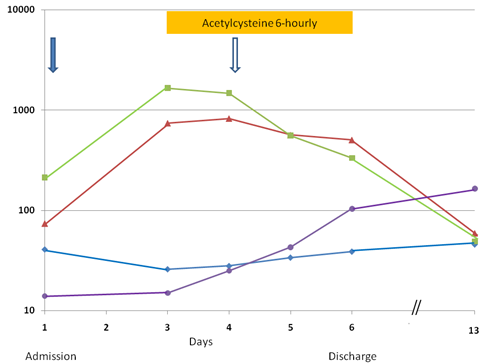 Hepatic SOS associated with dactinomycin treatment was diagnosed. Feeding was stopped, fluid intake was restricted, diuretic was given intermittently, and she was empirically treated with intravenous meropenem. She received N-acetylcysteine intravenously with a loading dose of 140 mg/kg followed by 70 mg/kg every 6 hours. N-acetylcysteine was diluted to a concentrated of 2.8 mg/mL and each dose was given as a 1-hour infusion. An apparent response was noticed on the next day when the liver enzymes were stabilized and the platelet count started to rise. On the following day, resolution of the hepatomegaly and ascites was obvious on clinical examination and the laboratory parameters were much improved (Fig. 2). N-acetylcysteine was discontinued after three days of treatment. By the sixth day of admission, the abnormal abdominal signs had disappeared and she was able to feed as normal. Serum ALT and AST levels dropped to 507 u/L and 333 u/L, respectively, and platelet rose to 104 × 109/L. Serum bilirubin levels remained normal during the hospitalization. She completed the rest of the treatment on time and remained in first complete remission at 16 months after diagnosis.

Studies in animals and from histopathology of affected patients have concluded that injury to the endothelial cells at the sinusoidal surface of the hepatocytes as the initiating event [1,2]. Obliteration of the hepatic venules as a result of subendothelial edema and microthrombosis leads to severe hepatic congestion, sinusoidal dilatation, and eventually portal hypertension and hepatocyte injury and death. Because of the inherent risks of liver biopsy, hepatic SOS is often diagnosed on clinical ground. The Seattle criteria define hepatic SOS as a complication of stem cell transplantation when a patient develops two out of the three clinical features within 21 days of the transplant: (1) jaundice, (2) painful hepatomegaly, and (3) ascites or weight gain of > 2% from baseline body weight. The findings of portal hypertension or reversed flow in the portal vein support the diagnosis of hepatic SOS but this is only seen in advanced disease.

About 8% or 41 out of 511 children receiving chemotherapy for Wilms tumor under the International Society of Pediatric Oncology (SIOP) collaborative studies developed hepatic SOS as defined by the Seattle criteria [3]. A German study reported an occurrence of SOS of 4.8% (23 cases) from 481 patients [11], whereas the National Wilms Tumor Study-4 recorded an incidence of 1.5% (23 out of 1,509 children) [4]. A recent single-center study from the Netherlands reported an incidence of 13.2% or 12 out of 91 children from pre-operative chemotherapy and who had undergone liver biopsy during nephrectomy [12]. Children less than one year of age, those with right-sided tumor, or those receiving abdominal radiotherapy are especially vulnerable to the complication [3], although the current case shares none of these risk factors. Hepatic SOS typically appears after the second to sixth dose of dactinomycin, at seven to 14 days after the last dose [7]. Unlike stem cell transplant recipients who fare 20-50% mortality [2], children with chemotherapy-induced SOS generally recover after a period of 6-180 (median 22) days [3]. Ludwig et al. [11] reported a mortality of 8.7% with two deaths out of 23 cases. Otherwise, fatal cases including an adult patient with Wilms tumor, are rarely reported [10,13-15].

Hepatic SOS complicating the treatment of conventional chemotherapy is often managed with supportive care alone with cautious treatment for fluid retention. In the setting of hematopoietic stem cell transplantation, however, antithrombotic or fibrinolytic therapies including recombinant tissue plasminogen activator, heparin, prostaglandin E2, antithrombin III, and defibrotide have been attempted [5]. Recent studies suggest that defibrotide may be a safe and effective treatment for hepatic SOS [16] but the agent is expensive and not widely available. NAC has been widely used for the treatment of hepatotoxicity associated with paracetamol poisoning with a good safety profile and manageable side effects [17]. NAC stimulates the production of glutathione and scavenges free oxygen radicals. In the laboratory, animals pretreated with glutathione or glutathione monoethyl ester are less susceptible to the lethal hepatoxic effects of BCNU, cyclophosphamide, and mitomycin C [18]. NAC has been reported to be beneficial in the treatment of hepatic SOS following stem cell transplantation [6] and has been used with some success in the authors' institution (unpublished observation). It was therefore used as an adjunct to supportive care in the reported case. Despite the advanced sonographic features, treatment with NAC in this case was followed by a rapid amelioration of the clinical and laboratory parameters of the liver disease.

Pharmacologic intervention for chemotherapy-induced hepatic SOS has previously been reported in nine cases (Table 1) [19-23]. The therapeutic agents include anticoagulants such as defibrotide, antithrombin III, heparin, protein C concentrate, and gabexate mesylate alone or in various combinations. High-dose methylprednisolone and aspirin was used in another patient. All affected children recovered from the treatments with laboratory improvements seen after 3 to 10 days of treatment. Given the usually long duration of morbidity and potential lethality in children treated with supportive care alone, these reports suggest that pharmacologic intervention may have a beneficial role in dactinomycin-induced SOS. Nevertheless, two children who received antithrombin III and heparin treatment developed clinically significant bleeding [22], while the child who received gabexate mesylate developed a hypersensitivity reaction [21].

In summary, NAC is a safe and may be a potentially effective treatment for hepatic SOS when the latter is diagnosed early.

13. Gulhan B, Kupeli S, Yalcin B, Akyuz C, Buyukpamukcu M. An unusual presentation of infantile fibrosarcoma in a male newborn. Am J Perinatol. 2009;26:331-3

21. Adachi N, Matsuda I. Veno-occlusive disease of the liver after combined adjuvant therapy for a 1-year-old boy with rhabdomyosarcoma: potential usefulness of the gabexate mesylate (FOY). J Pediatr Gastroenterol Nutr. 1992;14:314-8