In July 2009, a 27-year-old woman with two children was breastfeeding her second 4-month-old baby. At first she felt right breast a little tough. After about one month, the left one also became hard. At the same time, two breasts had no painfulness and other uncomfortable feelings except of hardness. And then, her baby refused to suck her breasts. In September 2009, she saw a doctor in her countryside hospital. The doctor said that she suffered from mastitis and gave her some medicine. But the conditions became severed. Finally, her bilateral breasts seemed as hard as stones (Fig. 1). However, since the doctor said that it was just mastitis, she was not worry about it.

In the beginning of 2010, she was presented with weakness, abdominal distension, slight pain and 5kg weight loss, but there were not bloodiness, diarrhea and changes in stool-shape. She went to the hospital again. After physical examination and abdominal ultrasound, doctor found a lump in bilateral ovaries, and considerable ascitic fluid. She was transferred to our hospital and re-examined, and the same signs were found under ultrasound (Fig 2). Because her bilateral breasts were still very hard, coarse needle biopsy was operated on March 3, 2010. The Hematoxylin-Eosin (H&E) staining revealed that a quantity of signet ring-like cells were diffused among fibrous tissues. Several residual breast little ducts and glands were scattered in tumors. Special staining verified Alcian Blue (AB) staining was positive. The most of breast SRCC occur on the postmenopausal women. Was the present SRCC of breast occurred in the young lady? Immunohistochemistry (IHC) was operated. ER, PR, E-Cadherin, and CK7 were positive in breast gland epithelium, and negative in tumor cells. CK20, CA199, CDX2 and Villin were positive in tumor cells (Fig 3), CerbB2 and CA125 negative. These results demonstrated that the tumor was a metastatic carcinoma from gastrointestinal tract, and not a breast primary one. How about bilateral ovary tumors? After one course of chemotherapy and on April 13, operations of bilateral ovaries were carried out. During operation, intraoperative frozen-section examination appeared ring cells among fibrous tissues of ovaries as observed in breast sections. Moreover, it was found that there were nodules on uterine and oviduct serosas, omentum, mesentery, and rectal surface with hemorrhagic ascites. Interestingly, H&E and IHC of lesions of bilateral ovaries and those nodules in abdomen were all consistent with those of the breast tumors (Fig 4). On June 16, 2010, the patient took fourth course of chemotherapy. During this course, she appeared digestive obstruction symptom-several days' diarrhea and then stopping exhaust. The clinic doctors doubted her intestine was blocked by a tumor. Because of her poor physique, she didn't take endoscopy detection. Finally, the patient died with cachexia on Sep 12, 2010.

Tough lumps of bilateral breasts with inverted nipples. (These photos were taken after the third course of chemotherapy.) 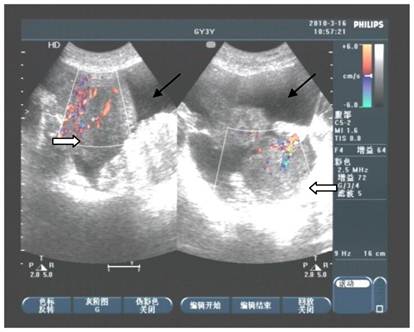 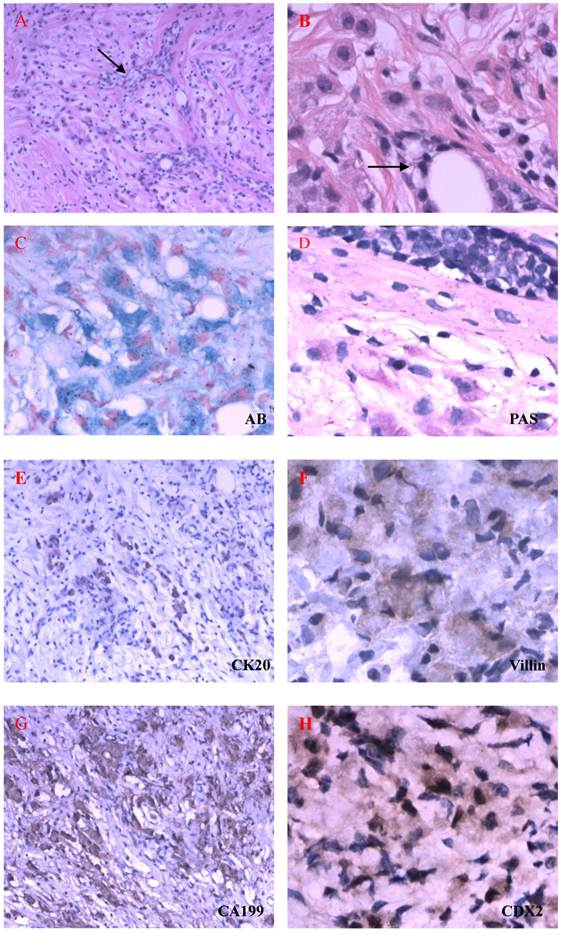 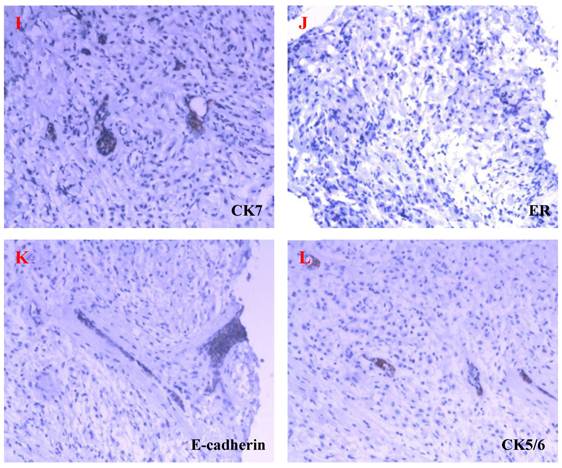 It was very regret that the gastrointestinal original lesions could not be obtained. Even so, a clear conclusion could be drawn from the clinical and pathological data that tumors of bilateral breasts and ovaries were metastatic from gastrointestinal tract. In other words, Primary tumor was originated from gastrointestinal tract. An analysis of 112 Krukenberg tumors in ovaries in 2006 found primary carcinomas were detected synchronously with, or subsequent to, detection of the only two thirds Krukenberg tumor [4].

In present case, many tumors with the similar H&E images were found in bilateral breasts, ovaries and abdomen. Where is the primary site? IHC verified the tumor originated from gastrointestinal tract. A variety of immunologic markers have been applied to distinguish SRCCs from the breast, stomach, and gastrointestinal tract. Firstly, although ER is an effective mark in breast carcinoma, one study showed that approximately 20% of breast SRCCs can be negative for ER [5]. While in the other study, up to 30% of gastrointestinal adenocarcinomas were ER positive [6]. Therefore, ER cannot be a single mark to distinguish these tumors. Secondly, adenocarcinomas of the breast, ovary and gastrointestinal tract show different CK7 and CK20 expression patterns. In breast and ovary adenocarcinomas, CK7 is positive and CK20 is negative. In contrast, CK20 is positive and CK7 is negative in gastrointestinal ones [5,6]. In a word, the combination of CK7, CK20 and ER could play some role in differentiating SRCC origination.

In recent years, some new antibodies were used as specific markers for distinction. For example, Villin is mainly produced by epithelial cells that develop a brush border. Cells producing Villin are reported to be found in the epithelial cells of the intestinal mucosa and gall bladder. So, Villin could be a useful marker for gastrointestinal carcinoma. Another antibody, CDX2, is considered to be a special marker for gastrointestinal carcinomas. It is a caudal-type homeobox, intestine-specific transcription factor that is expressed early in intestinal development and may be involved in the regulation of proliferation and differentiation of intestinal epithelial cells. One study [7] has demonstrated CDX2 expressed in all cases of colorectal adenocarcinoma and almost 50% of gastric adenocarcinomas, meanwhile, only rare cases of adenocarcinomas of the genitourinary and gynecologic tracts, breast, lung, and head and neck show significant levels of CDX2. Another study [8] found that CDX2 negative in breast SRCC, 89% and 90% in gastrointestinal tract and gastric SRCC respectively. In comparison with Villin which is sensitive and special for gastrointestinal adenocarcinoma, CDX2 is an easier marker for evaluation because it expresses in nuclei while Villin is restricted to the apical surface and there may be more false-positives.

IHC of the present case showed that ER, PR, CerbB2, E-Cadherin and CK7 were negative, CK20, CDX2 and Villin were positive. According to the above theories and studies, its gastrointestinal tract origination is assured. 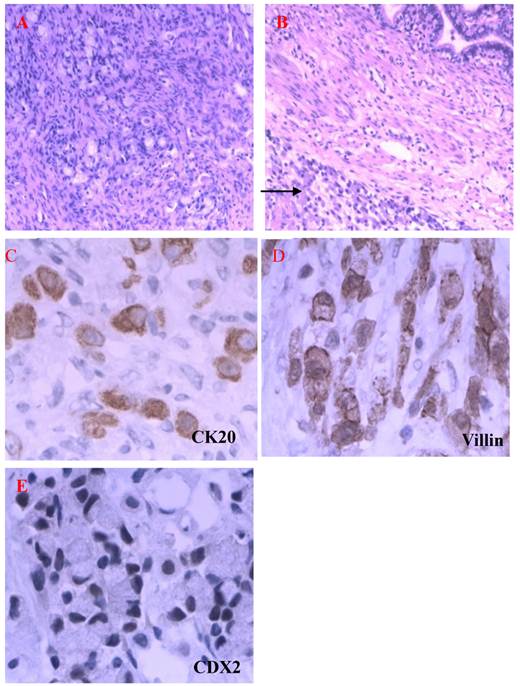 Why the tumor in this case advanced so rapidly and severely in the only half-year? It may be closely related to the breastfeeding condition. As known, during pregnancy and breastfeeding periods, estrogen hormone is always presented in high levels.

Some studies indicate that pregnancy and breastfeeding do not influence tumor advance compared with other people with similar stage and age [9]. A poorer prognosis of the tumors in pregnancy and breastfeeding women diagnosed at a later stage attributed to pregnancy. For example, the symptoms of colorectal cancer include nausea, vomiting, abdominal pain, and rectal bleeding. Physicians and pregnant women often assumed these are normal pregnant reactions and therefore miss early diagnosis [10]. Some studies believes that during pregnancy and breastfeeding periods, the increased vascularity of the breast, high circulating levels of hormones and immune suppressed state of pregnancy accelerate cancer development [11]. Similar to malignant melanoma, pregnant women may present with more invasive or advanced disease due to hormonal or growth factor effects [12]. Moreover, one study of a clinicopathologic analysis of 112 cases of Krukenberg tumors of the ovary found that in the patients with a recent pregnancy, the abdominal mass developed rapidly after delivery. In addition, estrogen receptors were present in all experimented cases. It suggested that estrogen influences tumor development.

In the present case, we do not know when the gastrointestinal tract tumor grew and migrated to breasts and ovaries. However, we believe that pregnancy and breastfeeding accelerate the tumor development. According to our and others' experiences, SRCC type Krukenberg tumors are often seen in young women [13, 14] and breast metastasis are rare. Until now, case like ours has not been reported. We speculate the tumor could not aggravate so rapidly if there is no pregnancy and breastfeeding.

In conclusion, tumors in pregnant and breastfeeding woman should be thought of and not be disguised by pregnancy symptoms.

We obtained informed consent from the patient for her breast photos used in the article.

4. Kiyokawa T, Young RH, Scully RE. Krukenberg tumors of the ovary: a clinicopathologic analysis of 120 cases with emphasis on their variable pathologic manifestations. Am J Surg Pathol. 2006;30(3):277-99

Dr Qingping Jiang is an experienced pathologist engaged in the pathological diagnostic work for over a decade. She has special expertise in the diagnosis of female reproductive tract, and in Obstetrics and Gynecology in a well-known hospital. In 2008, she received a medical Doctorate from southern medical university in China. Currently she is the head of pathological department of her hospital.