Human cancers occur worldwide. In 2008, 12.7 million new cancers and 7.6 million cancers were recorded; incidence and mortality rates varied with regions and levels of income around the world (1). These results require refocusing on all attributes of cancer.

Differentiating features of malignant and benign lesion are well established; these include rapid growth, increased cell turn-over, invasive growth, metastases, vascular or lymphatic channel invasion for malignant lesions. There are many exceptions to these attributes of cancer. There are overlaps between benign and malignant lesions. Benign (non-malignant) tumors do show chromosome aberrations; uveal melanomas and blue nevi share mutations in G protein (2). A good example is the recent attempt among dermatopathologists to segregate some melanocytic lesions as atypical melanocytic proliferations with low malignant potential (MELTUMP) (3). Sometimes a cancer at given site/organ is classified as containing two cell types; for example, pancreatic cancer with neuroendocrine and acinar/ductal components (4). What model can accommodate unclassifiable cancers in a specific location? Cancer classification schemes always reserve a group as unclassifiable. How can this group be eliminated?

The last two decades have witnessed the surge in molecular profiling (5, 6) and has already expanded into predictive and diagnostic molecular classification of cancers (7, 8). As in the diagnosis of cancers, current molecular classification schemes are still dependent on morphologic variables. These classifications schemes use cell of origin as seen by light and electron microscopy. Inherently, all organs can generate multiple cancer types as multiple cell types exist in these organs- “the holy-grail of all subspecialties”. Furthermore, cancer subtypes are generated under the banner of a single, specific cell type of origin concept. Take the example of the common Basal cell carcinoma- it has variants and subtypes such as nodular, superficial, adenoid, morpheaform, infiltrative, keratotic, pigmented, basosquamous, clear cell, granular, eccrine, apocrine, fibroepitheliomatous, adamantoid, and basosebaceous (9). Do these entities have unique biological features or simply morphological variants of interest only to the diagnostic pathologists? Will the “cancer stem cell origin concept” cure this malady?

The current move to genomics {(gene and transcripts, kinomes, microRNAs, single nucleotide polymorphisms (SNPs), gene copy number variation (CNVs) and proteomics (antibody microarray and mass spectrometry)} brings change to the diagnostic information needed for treatment. Along with the genomic profiling, are efforts at targeted and gene therapy. Because of accumulated experience, in diagnosis, classifications and treatment of cancer that depends on morphology, the shift to genomic methods should be comprehensive and adequate for day-to-day clinical use. While future cancer classification schemes or models may not require morphological attributes, current dependencies on morphological phenotype requires its inclusion (10-12). Morphologic cancer phenotyping does not need to hide the compendium of genetic alterations, interactions with environment and alterations in transcriptional and protein interaction networks that are present in all cancers (11, 13).

Hanahan and Weinberg (2000) (14, 15) listed the seven attributes of cancer; 1) Self sufficiency in growth signals, 2) Insensitivity to anti-growth signals, 3) Evading apoptosis, 4) Limitless replicative potential, telomerase and telomeres 5) Sustained angiogenesis, 6) Tissue invasion and metastasis, and 7) Genome instability. All seven attributes have received great attention in the past decade. Growth and anti-growth signaling are really complex (13). Protein-protein interaction and signaling networks, growth signaling pathways, the role of ubiquitination and protein degradation, and dysfunctional protein networks (16-18) and interactions are complex, described as hubs, modules and motifs (13). Information on cancer cell death and provocation by drugs and irradiation now requires all cell death types to be considered- apoptosis, necrosis, autophagy (19, 20). We now must include the pivotal role of microRNAs (21, 22), and methylation patterns (23). For example, microRNA-185 suppress cancer growth by interfering with Six1; when absent in cancers leads to increase growth and progression (24). Recent efforts have uncovered the role of transposons in the induction of cancer in mouse models; the studies are generating previously unknown cancer related genes (25). Class II (DNA transposons) and class I retrotransposons contribute to DNA instability (26). Cancer cells use aerobic glycolysis to meet energy needs (Warburg effect) and presumed to be a response to hypoxia and tumor micro-environment; changes in metabolic needs of cancer cells such as need for glutamine and activation of hypoxia-inducible-factor (HIF) are interconnected to oncogene activation (27-29). These interacting functionalities of cancer cells impact prognostic and predictive models based on one or two functional attributes of cancer (30).

The traditional model of cancers envisaged a “normal cell” transformed to “atypical or dysplastic“ cell with progression into invasive of malignant cell. This is the model that only assumes stochastic generation of cells capable of the behavior of metastasis and progression and cellular heterogeneity of cancers. The stochastic model is used to explain heterogeneity in cancers such as in prostate cancer (Fig 1). The stochastic model will have to assume that all genetic aberrations conferring advantages to the cancer cells “must be maintained in all subsequent cells as growth and proliferation continues and some maturation occurs”. As cancers can also undergo senescence, apoptosis, autophagy and necrosis, the stochastic model must account for these changes (31, 32). Cancer senescence occurs via telomere shortening, oxidative stress, and oncogene activation, that can impair cancer progression (33-35).The stochastic model has to account for local recurrence and metastasis after long post-treatment intervals. Cell of origin models cannot exclude all interactions between cancer cells and any influence from the stroma (36, 37). Recent computational stochastic models, in part based on the hallmarks of cancer, suggest that onset of cancers depend on the first two (2) mutations and early-onset and late-onset cancer initiate these mutations at different times (38). Cancer initiation via DNA damage response and repair, induction of senescence and p53 mutation (39), the generation of driver mutations can be accommodated in stochastic and cancer stem cell models. Driver mutations in cancer initiation are suggested to accumulate over time. Recent detailed studies of human cancers and cancer cell lines show extensive and highly localized mutations following DNA damage and repair response; 2-3 % of human cancers develop these single chromosome mutations labeled as chrothripsis and are suggested as the genesis of driver mutations generated (40). There are no unique driver mutations for the stochastic model. 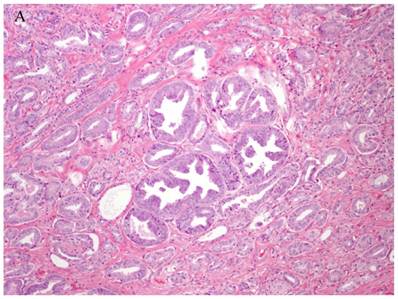 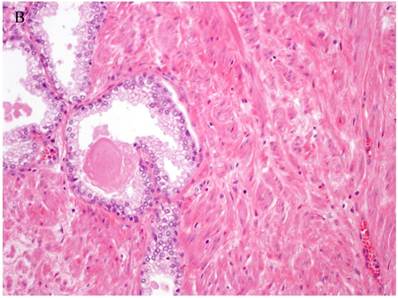 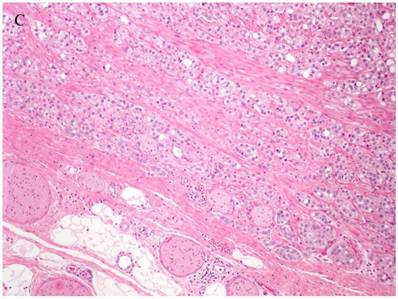 Cancers of certain presumed cell types, synovial cells, occur in locations without defined synovium or other related cell type. Clear cell sarcoma is seen in deep soft tissues and is a copy of all features of melanoma except for genetic aberrations. How do we explain these cancers on the cell of origin concept? Prostate cancer cell of origin thought to be luminal cells, are now shown to be derived from basal cells with the attributes of androgen-independence (41).

Comparison of Stem Cell and Lineage/Clonal Evolution Models of Cancer Cell Origin. (a)The lineage/clonal evolution model is used in morphological classification of cancer. One cell type gives rise to one cancer type. Squamous epithelium gives rise to squamous cell carcinoma. Pathologists do encounter squamous cell carcinoma in the urothelium of the urinary bladder. How we explain this is by “metaplasia of urothelium to squamous epithelium” and perhaps then to squamous cell carcinoma. An easier explanation will be cancer stem cell model as these have the capacity to become any cell type. (b) Cancer stem cells, with their inherent functional capacities including reduced cell death, are of interest when cancers are treated by irradiation or chemotherapy. Human cancers, examined in detail and extensively, do contain heterogeneous cell types; lung cancers are a good example. This leads to difficulties in some classification schemes depending on lineage. 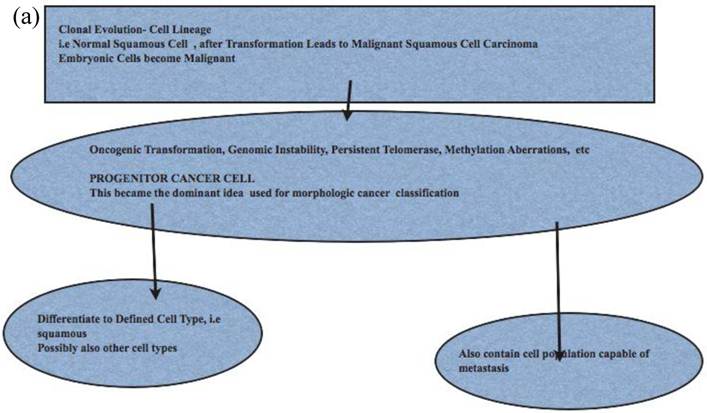 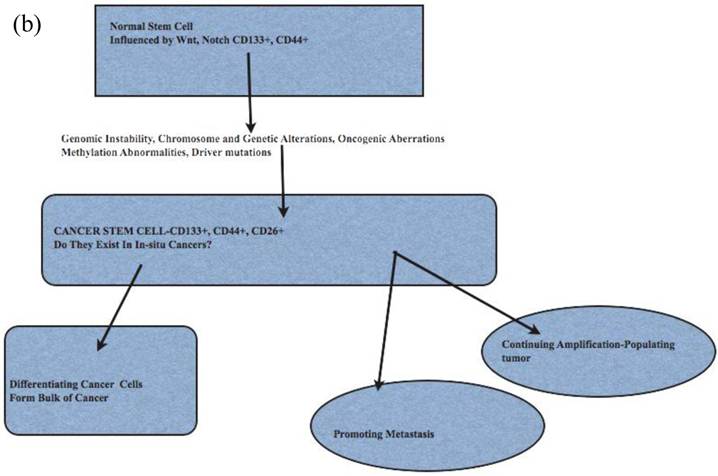 Cancer metastasis occurs either through progressive acquisition of metastatic potential or the traits are acquired early during cancer initiation; this implies that metastases occurs early or late in cancer (59-61). The acquired traits include survival and evasion of cell death, dormancy, migration, immune escape, and ability to seed, home on targets (62). Support for late evolution of metastasis was described in pancreatic cancer using genome sequencing ; this study indicated clones with metastatic capacity evolve late ( 5years), and are present in the primary tumor (63, 64). Breast cancer cells reaching the bone marrow share stem cell features and markers CD24 and CD44 as determined by double immunohistochemistry in bone marrow; these stem-like cells ranged from 33-100% in metastases (65). CD26+CD24+ positive cancer cells found in colon cancers, not initiating CD133+CD26+CD44 positive cells, define occurrence of metastases (66). Some have separated cancer stem cells from pancreatic cancers capable of initiating metastases (67).

How will the push for personalized medicine affect the present morphology based and the future trend of molecular cancer classification? Personalized medicine, as envisioned will require individual cancer genomics and proteomics for maximum benefit of targeted treatment for the individual; the implications of genomic cancer medicine should encourage use of integrated cancer classification models (68-73).

The model envisaged (Fig 3) takes into account all elements of a cancer. We now can provide morphologic classes and subtypes, extract proteomic and gene profiles and gene copy number variations including cytogenetic and array comparative genomics. An added feature is that the functions of proteins and signaling pathways can be derived from gene expression and proteomics. This means that altered or dysfunctional pathways can be supported by adding cytogenetic or CNV data. There are emerging integrated models that use both genomics, exon resequencing, and proteomics in cancer analysis (74-76). Recent prostate cancer survival and post-surgical recurrence used modeling based on some aspects of the integrated classification model including mutation patterns, CNVs, targeted signaling pathway deregulation, miRNA and cDNA profiling; new oncogenes, and CNV-based disease risk profiles over above morphology grades were found (77). 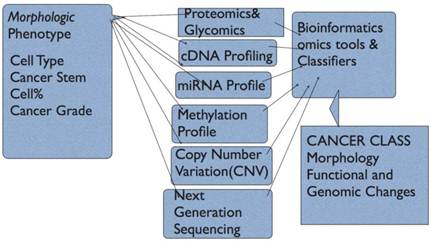 The integrated model can be generated using comprehensive bioinformatics and data mining tools. OmicsAnalyzer is one such tool, which is a plug-in for Cytoscape (cytoscape.org), a web based platform for protein/gene network modeling, functional annotation and analysis. (110). Bioinformatics tools for classification, data mining and modeling are available ( R-project.org). The integrated model of cancer classification can help stratify individuals for target treatment and disease outcome based on the treatment (Table 2).

Cancer cells are endowed with capacities for uninhibited proliferation, invasion and metastasis. Cancer initiation, driver mutations, progression and metastases are common attributes for both stochastic and cancer stem cell models; cancer stem cells possess attributes that enhance survival in all environments hence more suitable as model of cancer. Integrated models that capture every essence of a cancer could enhance the ability to target different components of cancer for maximum therapeutic effect.

The author has declared that no conflict of interest exists.