Background: Little information is available on the long-term outcomes of patients with localised prostate cancer.

Participants: Data on 2121 patients with histologically-confirmed, localised prostate cancer diagnosed between 1998 and 2007 were extracted from the cancer registry of the tumour centre in Regensburg, Germany.

Measurements: Overall survival rate in the patient cohort was estimated and compared to the expected survival rate of a comparable group in the general population derived from the official life-tables of Germany stratified by age, sex and calendar year.

Results: Ten years after diagnosis, patients with stage I and II localised prostate gland carcinoma had an approximately 10% increase in survival compared to the normal male population (Relative Survival = 110.7%, 95%-CI 106.6 - 114.8%).

Limitations: We did not examine the effect of cancer treatment or cancer aggressiveness on the overall survival of patients. We did not assess the incidence of subsequent non-primary cancers in our patient population or how this incidence affects the patients' follow-up care and survival.

Conclusions: Patients with stage I+II localised prostate gland carcinoma have improved survival compared with the normal male population. This finding cannot be explained solely by the administration of prostate carcinoma treatments, suggesting that men who participate in PSA screening may have better overall health behaviors and care than men who do not participate in screening. Future research should examine how treatment choice, especially an “active surveillance” approach to care, affects survival in these patients more than ten years after diagnosis.

The incidence of prostate cancer has increased in industrialized nations worldwide in the past three decades (1). Today, almost 20% of men over 50 years old will receive a prostate cancer diagnosis, and between 1979 and 2006 the detection of prostate cancer increased among men less than 65 years of age by approximately 4.1-fold (1). These increases can be explained in-part by the implementation of extensive prostate-specific antigen (PSA) screening programs and the aging populations of industrialized nations (2,3).

We extracted epidemiological and clinical data from the Regensburg regional tumour registry on patients diagnosed between 1998 and 2007 with prostate cancer. The cancer tumour registry of Regensburg is a population-based registry that records the diagnosis, treatment, and follow-up care of any known malignancy in cancer patients living in the districts of Oberpfalz and Niederbayern, Bavaria, Germany. The data for the registry are provided by primary care physicians, hospital staff and pathologists from the districts using standardised cancer registry forms. The registry captures more than 90% of all persons diagnosed with cancer located in the two districts, which have a combined population of approximately 2 million residents (6).

All patients included in this study had a histologically-confirmed prostate carcinoma (diagnosis C61), based on the International Classification of Diseases ICD-10 (8). The registry record for each patient included the initial clinical and the pathological stage according to the classification of the International Union Against Cancer (UICC) (9). We used this classification to select patients with early and locally-limited cancer UICC stages I and/or II, comprising patients with small tumour size (T1 and T2), negative nodal status (N0) and no distant metastasis (M0). Although not part of our primary study objective, we also selected patients with stage III and stage IV prostate cancer to evaluate the relative, long-term survival in patients with later stage prostate carcinoma. We ascertained the life-status of the registry patients using death-certificates and information from the registration offices of the patients' respective resident districts.

We calculated overall survival rates and relative survival rates of the cancer patients at 5 and 10 years post-diagnosis. The cumulative relative survival rate is defined as the ratio of the observed overall survival rate in the patient group and the expected survival rate of a comparable group from the general population matched with respect to age at diagnosis, sex and calendar year of diagnosis. For this comparison the official German life-tables from 1998 to 2007 were used, stratified according to age, sex and calendar year. We applied the software SURVSOFT for calculating overall survival choosing the standard life table (actuarial) method with one-year time intervals and for calculating relative survival choosing the method of Hakulinen in order to estimate expected survival (10). All patients - regardless of length of follow-up - were included. We did not differentiate or control for the types of cancer treatments received by the patients, because we were interested in overall survival independent of treatment choice. Descriptive data analyses were performed using the statistical software SPSS V.18.

Overall survival of patients, expected survival of comparable normal population, and relative survival of the patient cohorts at 5- and 10-years post-diagnosis by cancer stage. 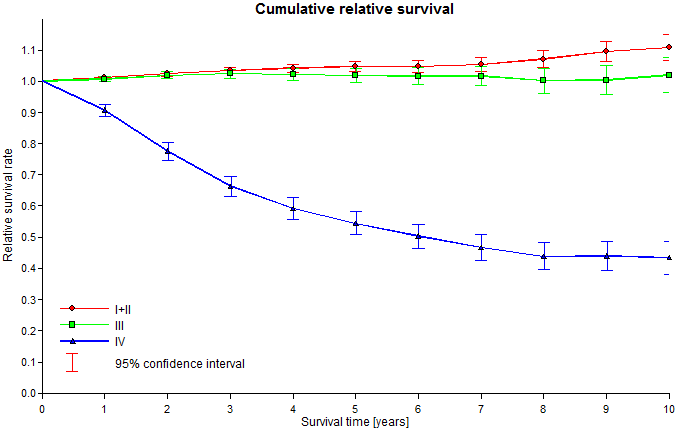 Our analyses showed that patients with stage I+II localised prostate gland carcinoma have improved survival compared to the normal male population, and this relative survival advantage appears only 2-3 years after diagnosis (Figure 1). This finding cannot be explained definitively by the administration of prostate gland carcinoma treatments (e.g., radical prostatectomy, radiotherapy), which have been shown to result in a survival advantage only after several years (11,12,13).

We suggest three primary explanations for our findings. First, as described in previous research, relatively healthy men take advantage of PSA-supported preventive measures and show reduced morbidity and improved survival compared to men who do not participate in PSA testing (14). Additionally, we know from the 2008 work of Fröhner et al. that in men 63 to 69 years of age increased comorbidity is a strong predictor of 10-year mortality in men receiving radical prostatectomy (15). Our results support these findings by suggesting that the health of men who undergo PSA-testing, especially those in the 50-70 year-old age range, is better overall (i.e., lower comorbidity) than that of men who do not participate in PSA screening. Second, research has shown that a cancer diagnosis can be a “teachable moment” that encourages patients to adopt better health behaviors (16,17). The men in our sample who were diagnosed with stage I or II prostate cancer may have made more positive health choices compared to the general population in the first few years after their diagnosis. Third, the observed improved survival may result not only from the superior health-consciousness and behaviors of cancer patients, but also from socioeconomic advantages (e.g., higher levels of education and income) that make one more like to receive secondary prevention outreach by health care providers and the media (18,19,20). The socioeconomic disparities in secondary prevention outreach and up-take are cited as a major weakness of PSA screening systems. Furthermore it is well possible that physicians exercise a more careful patient selection for prostate cancer screening.

The goal of treatment for prostate gland carcinoma should be the effective delivery of care to every diagnosed patient, and this care must take into account each patient's individual needs, living conditions, and tumour biology. Our finding that men with stage I+II prostate cancer have survival advantages independent of treatment choice suggests that the current standards of care in Germany—which result in almost 70% of prostate cancer patients under the age of 70 receiving radical prostatectomy—should change to include less invasive methods of treatment for cancers at low risk of progression (21). Accordingly, several European treatment guidelines now include “active surveillance” as an evidence-based method of treatment for localised, low-risk prostate carcinoma (5).

Limitations to our study include the fact that we did not examine the effect of individual, evidence-based treatments for localised prostate gland carcinoma or cancer aggressiveness (e.g., Gleason score) (21) on the overall survival of patients. We also did not evaluate whether all patients with stage I+II prostate cancer included in the study had underwent PSA screening to confirm our conclusion that the patients' survival advantage related to their participation in PSA testing. Lastly, we did not assess the incidence of subsequent non-primary cancers in our patient population or how this incidence affects the patients' follow-up care and survival (21). We plan to conduct future analyses to examine these questions in the German population.

Patients with localised, stage I+II prostate gland carcinoma demonstrated improved long-term health compared to the normal population, regardless of the treatment received during the first ten years after diagnosis. The finding suggests that that men who participate in PSA screening may have better overall health behaviors and care than men who do not participate in screening and that men who receive a cancer diagnosis may make positive health behavior changes after their diagnosis that improve their long-term survival. Future research should examine how treatment choice, especially an “active surveillance” approach to care, affects survival in these patients more than ten years after diagnosis. Research should also evaluate the long-term survival impact of socioeconomic disparities in the receipt of prostate cancer secondary prevention outreach and services.

3. Borre M, Nerstrøm B, Overgaard J. The natural history of prostate carcinoma based on a Danish cancer population treated with no intent to cure. Cancer. 1997;80:917-928

17. Humpel N, Magee C, Jones SC. The impact of a cancer diagnosis on the health behaviors of cancer survivors and their family and friends. Support Care Cancer. 2007Jun;15(6):621-30