Formaldehyde fixation and paraffin-embedding remains the most widely used technique for processing cancer tissue specimens for pathologic examination, the study of tissue morphology, and archival preservation. However, formaldehyde penetration and fixation is a slow process, requiring a minimum of 15 hr for routine processing of pathology samples. Routinely fixed samples often have a well-fixed outer rim, with a poorly-fixed inner core of tissue. In this study, we show that the application of elevated pressure up to 15,000 psi improves the rate of formaldehyde fixation by approximately 5 to 7-fold while preserving the tissue morphology of porcine liver. The tissue also exhibited much more uniform formaldehyde penetration after 30-60 min incubation under elevated pressure than samples fixed for the same length of time at atmospheric pressure.

Formaldehyde was first identified as a fixative for tissues more than a century ago [1]. Due to its utility for virtually all tissue types, formalin fixation remains the preeminent technique for processing biopsy specimens for pathologic examination, the study of tissue morphology, and archival preservation. Buffered formaldehyde is inexpensive, readily available, and unlike ethanol as a fixative, does not cause excessive tissue shrinkage or distortion of cellular structure [2]. Formaldehyde halts tissue degradation by reacting with lysine, cysteine, arginine, tryptophan, histidine, and N-terminal amines to form methylol adducts. The methylol adduct can subsequently undergo a dehydration reaction to form a Schiff base, which is seen most frequently in lysine and tryptophan residues. Additionally, the protein N-terminal amine can be converted to a stable 4-imidazolidione adduct [3,4]. Stable methylene bridges have been reported in both model peptides [4] and whole proteins, such as insulin [3].

There are several drawbacks to the use of formaldehyde as a universal fixative, including the so-called penetration-fixation paradox [2]. As a small molecule, formaldehyde is expected to penetrate tissues at a rate independent of concentration [2,5]. However, when tissue sections incubated in a variety of fixatives were soaked in 0.02% chromic acid to macerate unfixed tissue, Underhill found that formaldehyde was a very slow fixative relative to acetic acid or ethanol [6]. Subsequently, Start, et al. determined a positive correlation between fixation time and distance traveled in human spleen [7]. However the measured diffusion coefficient for formaldehyde was 1.6-fold less than for acetic acid, and slower than the diffusion coefficient previously determined in blood plasma coagulum [5]. By observation and prediction, formaldehyde penetrates just 2.4 mm in 24 hr, leaving a well-fixed outer perimeter of tissue and poorly-fixed inner core in a 10 mm diameter tissue punch [7]. In kinetic studies, the binding of 14C-formaldehyde reached a plateau after 24 hr, though formaldehyde binding at 37°C was faster than at room temperature, and faster at pH 7.0 than at low pH [8]. Finally, conventional histological processing, in which tissue is fixed overnight in buffered formalin, dehydrated through a series of graded alcohols and xylene, and embedded in paraffin, takes up to 15-18 hr in a clinical setting. This overnight process decreases throughput and delays pathological examination of biopsy samples.

In this study, we show that the application of elevated pressure up to 15,000 psi improves the rate of penetration of 10% formalin to which Brilliant Blue FCF (FD& C Blue 1) has been added as a tracking dye. Brilliant Blue FCF does not react with formaldehyde, and has been previously used as a tracking dye in soil studies and is well suited for this purpose due to its vivid color, and well understood mobility in aqueous solutions [9]. We also compare the morphology of tissue fixed under elevated pressure to samples fixed at atmospheric pressure.

The tissue processing protocol used in this study is illustrated in Figure 1.

Work flow utilized in this study. 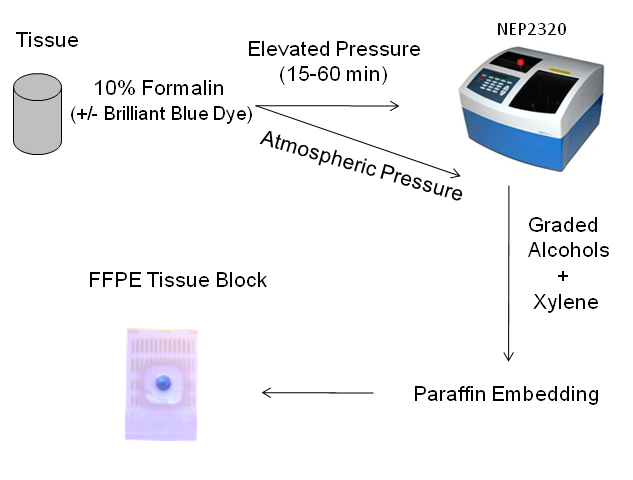 Porcine liver was purchased from a local slaughterhouse. The freshly obtained liver was stored in ice-cold PBS for approximately 30 min prior to tissue grossing and histological processing. The tissue was cut laterally into 5 mm thick sections with a clean razor blade, and 5 mm diameter cores were taken using a stainless steel tissue punch. The tissue punches were then incubated in 10% neutral buffered formalin, with 0.5% w/v Brilliant Blue FCF dye for 15 min - 4 hr, at atmospheric pressure or elevated pressure. The high pressure fixation experiments were carried out at 15,000 psi using a NEP 2320 Barocyler and disposable FT500-ND tubes (Pressure Biosciences, Inc., South Easton, MA). The barocycler was retrofitted with a manual external pressure control module (MEC, Pressure Biosciences). For static pressure studies, the pressure was manually increased from atmospheric pressure at a rate of 500 psi/second and held at the target pressure for 15-60 min before releasing the pressure at the same rate. Samples were also incubated with pulsed pressure, in which the pressure was decreased to 10,000 psi over 15 seconds and then increased back to 15,000 psi at the same rate. Formalin incubations were carried out at room temperature or 42°C.

The tissues were dehydrated and paraffin embedded according to standard histological protocols [11]. The formalin-treated tissue was washed with distilled water and then dehydrated through a series of graded alcohols for 30 min each: 70% ethanol, 85% ethanol, and two changes of 100% ethanol. The tissue was then incubated through two changes of xylene, 30 min each, and placed in 60°C paraffin overnight before paraffin embedding.

Three serial 5 µm paraffin sections from the middle depth of each paraffin block were mounted on SuperFrost plus™ slides (Fisher) and the slides were incubated for 2-4 hr in a 65°C oven. The slides were incubated through 2 changes of xylene, 5 min each, to clear the paraffin. 1 slide from each fixation condition was mounted with Permount (Fisher) rather than Hemaotoxylin and Eosin (H&E) staining so that the degree of penetration by the formaldehyde-dye mixture could be determined visually. The remaining slides from each fixation condition were rehydrated through a graded ethanol series, then H&E stained according to standard protocols [12].

Each H&E stained section was documented at 40X magnification using a Leica DMRXA optical microscope with motorized x-y stage (Leica, Wetzlar, Germany), Retiga 2000SVGA color camera (QImaging, Surrey, BC, Canada), and IPLab image analysis software (BD Biosciences, Franklin Lakes, NJ, USA). The overview image of non-H&E stained tissue sections was digitally documented at 50X power using a Keyence VHX-600E digital microscope fitted with a VH-Z20R lens (Keyence, Inc., Charlotte, NC, USA). The percentage of the formaldehyde-dye mixture penetration for each 5 µm section was determined as the ratio of the radius of the blue dye front to the radius of the tissue. For the diffusion coefficient (K) of formaldehyde, the distance penetrated in mm was measured immediately after 0 - 60 min of formaldehyde exposure. The distance penetrated in millimeters (d) for each fixation condition was graphed versus the square-root of the formaldehyde incubation time in hours (t) and the diffusion coefficient was determined by linear regression so that:

Effect of Pressure on Formaldehyde Penetration

Fresh porcine liver tissue cores were incubated under elevated pressure or at atmospheric pressure (conventional fixation) and the percentage of formalin penetration for each sample was determined by measuring the depth of the tracking dye front. The results are summarized in Table 1 and shown in Figure 2. Almost complete penetration of the formaldehyde-dye mixture was observed after incubation at atmospheric pressure (14.7 psi) for 4 hr (Figure 2 H2). When samples were incubated at room temperature and 15,000 psi with pulsed pressure, the rate of penetration increased by more than 5-fold, with 70% dye penetration observed after 15 min (Table 1). Almost complete dye penetration was attained after 30 min with pressure pulsing (Figure 2 G2). The ratio of the width of the dye front to the radius of the tissue for samples fixed at atmospheric pressure was ~0.1 after 15 or 30 min and 0.2 after 1 hr. The intensity and degree of penetration of the tracking dye increased with time or temperature (Table 1). Complete penetration of the dye was seen after 30 min at 42°C (Figure 2 C2) or ~1h at room temperature (Figure 2 E2). The apparent diffusion coefficients were also determined for each fixation condition (Table 2). The addition of pressure pulsing at 15,000 psi increased the coefficient for the formalin-dye solution by 5 fold, while the addition of static pressure increased the coefficient of penetration by 4.6-fold. When the tissue punches were incubated at 42°C and 15,000 psi, the diffusion coefficient of formalin increased to 3.4. 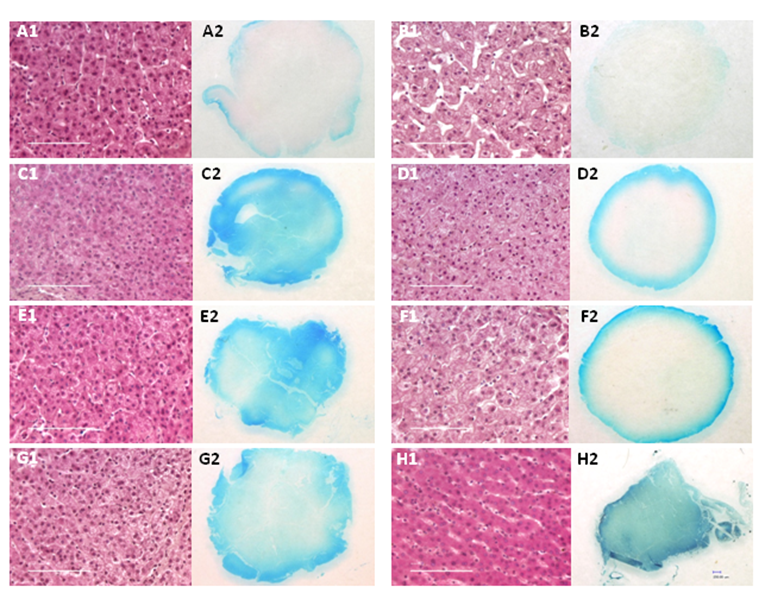 To evaluate the effect of high pressure-assisted diffusion on tissue morphology, H&E stained sections from multiple tissue blocks were examined. Images of representative 5 µm tissue sections are shown in Figure 2 and Figure 3. Liver tissue was chosen because of its relatively homogenous structure. Normal porcine liver contains multiple lobules which are separated by connective tissue. Each lobule is composed of rows of hepatocytes, which are roughly round in shape with eosinophilic cytoplasms and round nuclei [13,14]. The cellular morphology of samples fixed at elevated pressure for 15 min (Figure 2 A1) and 1 hr (Figure 2 E1) was virtually identical to tissue fixed for 4 hr at atmospheric pressure (Figure 2 H1). In the pressure treated samples, the hepatocytes are tightly packed, with very narrow sinusoids, or spacing between cells. In high magnification images of liver punches fixed at atmospheric pressure for a short time (i.e. 15 min, Figure 2 B2), the tissue is less tightly packed, with very wide sinusoids. This phenomena is apparent in the detail images shown in Figure 3, which compares the morphology of tissue fixed in formalin for 15 min at atmospheric pressure (3A), 15 min at elevated pressure (3B), and 4 hr at atmospheric pressure (3C).

Formalin-fixed, paraffin-embedded tissue is frequently used to preserve specimens for pathological examination due to the high quality of the resulting tissue blocks, its low cost and ease of archival storage [2]. However, the slow rate of passive formaldehyde diffusion necessitates longer tissue processing times of up to 18 hr for routine biopsy samples. In this study, we demonstrate that the addition of elevated pressure to a standard formaldehyde-fixation protocol increases the rate of diffusion of 10% neutral buffered formalin. The apparent formaldehyde diffusion coefficient, K, increased by 5-fold for tissue incubated with pressure pulsing (Δ 5,000 psi), and 7-fold at 42°C, and15,000 psi. Tissue morphology and cellular structure were well preserved for samples fixed at elevated pressure for as little as 15 min, and were comparable to tissue fixed at atmospheric pressure for 4 or more hours. In contrast, tissue incubated in formaldehyde at ambient pressure for short periods of time appeared to be in poorer condition, most likely due to the poor penetration of formaldehyde. These studies show that the addition of elevated pressure to conventional formaldehyde fixation improves the diffusion of formaldehyde throughout the tissue. It is possible that elevated pressure can be applied to all steps of histology to reduce total tissue processing time and expedite pathology results.

This project has been funded in whole or in part with federal funds from the National Cancer Institute, National Institutes of Health, under grant 1R21 CA134359. The content of this publication does not necessarily reflect the views or policies of the Department of Defense, or the Veterans Health Administration, nor does mention of trade names, commercial products, or organization imply endorsement by the United States Government.

Carol B. Fowler, Jeffrey T. Mason, and Timothy J. O'Leary are named as lead contributors in a patent application filed with the USPTO by the Veterans Health Administration and the Armed Forces Institute of Pathology (Title: Pressure-assisted molecular recovery (PAMR) of biomolecules, pressure-assisted antigen retrieval (PAAR), and pressure-assisted tissue histology (PATH). There is also a Cooperative Research and Development Agreement between the above named parties and Pressure Biosciences, Inc., South Easton, MA. No salaries or research funds were paid by Pressure Biosciences, Inc.

10. Preece A. A manual for Histology Technicians. Boston: Little, Brown and Company. 1972